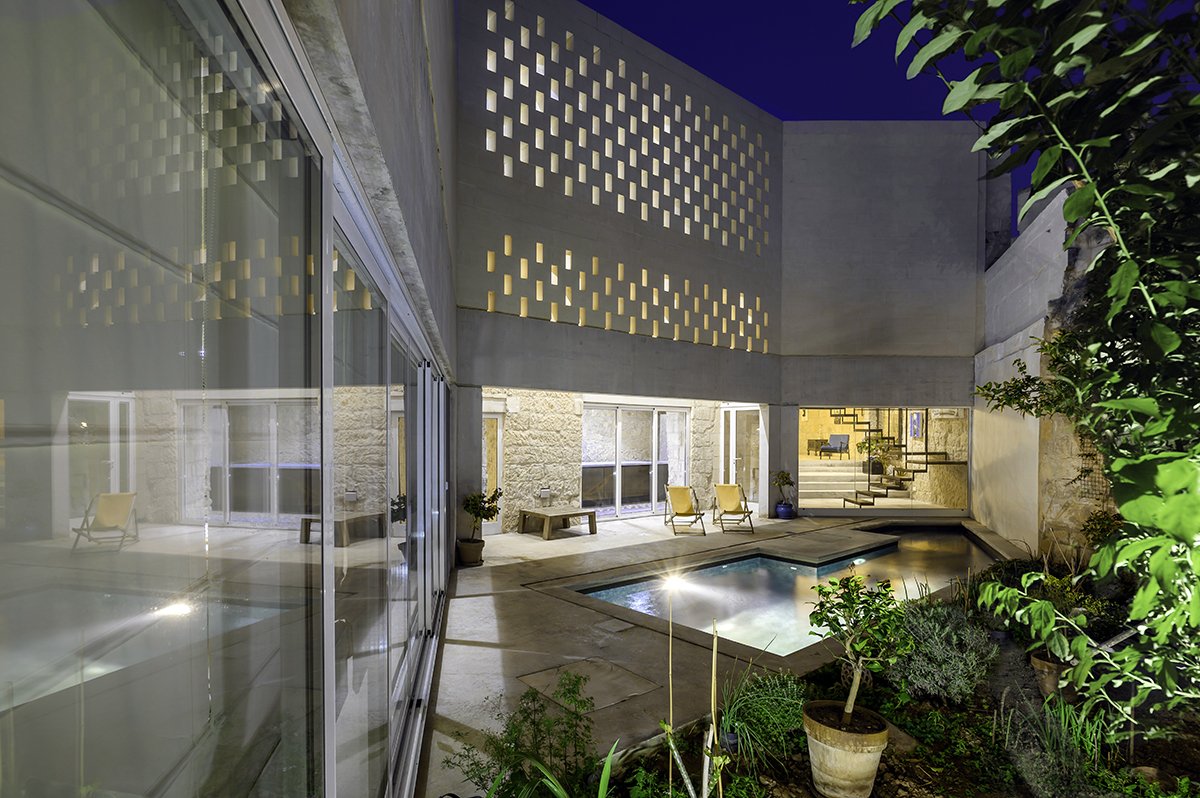 Step through the front door of this house and the vista before you is unexpected. The simplicity of the front belies the ambitious architectural design that lies within, the first hint of which is the suspended staircase in the hallway, a beautiful sculptural piece that has as its backdrop the pool and garden beyond.
And it is from the rear garden that the property’s true character is fully revealed – two connected buildings, one old, one new, with strategically glazed apertures at the garden level that take advantage of the light and open up to allow for a relaxing indoor-outdoor vibe.
However, the newer construction has been carefully orientated to ensure the impact of the summer sun is kept to a minimum, with the main living areas enjoying the morning rays from the east but shaded from the scorching heat of the afternoon. In addition, an overhanging perforated completely shades the kitchen area below it and the first-floor circulation space behind, as well as adding an extra layer of insulation to the bedrooms.
Creating such a home, however, was not straightforward, and it is lucky that the homeowners, a family of three, was not daunted by the thought of a big renovation project because this house was certainly that. ‘What was interesting was the size of the property, its potential, the outdoor space as well as its orientation,’ says the homeowner, explaining what made them choose the abandoned house. ‘Also there was the prospect of a great deal of DIY!’
Tucked down a narrow alleyway, the property is beautifully secluded but this meant materials had to be brought in by hand as there was not sufficient access for heavy machinery or cranes. An original 300-year-old building, it also consisted of numerous unattractive post-War additions that had eaten into the rear garden.
The renovation began with the removal of these additions to increase the size of the garden even though this meant reducing the home’s footprint. ‘Private outdoor space has become a more valuable commodity than ever,’ explains Andrew Vinci of VINCI Architects who was responsible for the design. This left just the original house made up of a ground floor and an upper level with only one room. To this was added the south-facing, double-height extension that took the garden as its starting point, and the ceiling of the original building was raised to allow for further bedrooms to be built. ‘The way the house opens up to the external spaces at the garden level contrasts strongly with the solid limestone volume of the upper bedroom levels,’ says Andrew. ‘This keeps the new build in context as it ties in with the simple limestone volumes of the surrounding vernacular buildings whilst also allowing for more privacy.’ Adds the homeowner: ‘The outside does not feel like an extension but truly part of the entire home as it can be appreciated from every room both visually and in practice.’
Inside, original walls are teamed with concrete floors for a pared-back feel, the use of concrete linking the interior to the exterior facade. Where possible, materials were recycled including old doors and stones. ‘We found an old layer of patterned tiles under the existing floor and these were carefully removed and cleaned, and these together with plain tiles found from three other different sites in the property were cleaned and laid by yours truly to fill gaps in floor where openings were widened or walls removed,’ says the homeowner. ‘Steel frames from old beds were used to create part of the roll-out staircase to the mezzanine and wood from an old table was used for the threads on the access ladder too.’
These stairs are a continuation of the striking staircase on the ground floor that’s made of painted steel square sections and wooden treads. ‘The challenge was to connect the upstairs and downstairs without wasting any space and finding a place for the stairs to connect the levels,’ says the homeowner.
The solution was to think beyond the usual staircase construction. ‘Working in suspension, the steel elements could be kept quite minimal and structurally light so although they are placed in front of a window with views onto the garden, it does not detract from the view as one enters the home,’ says Andrew.
The renovation took two years and Vinci Architects and the homeowners worked in partnership to create the home. ‘Having known one half of the couple for a number of years prior and how open he would be to the unconventional I knew from the outset that I could deliver a truly personal project,’ says Andrew. ‘I think we worked really well together,’ adds the homeowner. ‘T’was a true labour of love and today, living here is fantastic. We love the light, the peace and the entertaining space and as the downstairs rooms allow access to the outside we enjoy a form of inside/outside of living all year round.
‘But the architecture aside, the improved quality of life that this house and its surroundings allow really do contribute to our happiness. Nowadays it has become a luxury to have light, quiet and space. Having it wrapped in such a package is a bonus. We feel settled, and it is a space we can share with family and friends.’

As well as providing an insulating layer and shade, the faceted exterior throws ever-changing shadows throughout the day, and looks beautiful at night when back-lit

The staircase is made of painted steel square sections and wooden treads and has a beautiful sculptural feel. The ﬂagstones were individually cast out of concrete.

With the ceiling raised, the room has a sense of lightness and airiness. The ﬂoor tiles are original and were polished. The kitchen island is of wood veneer with a Corian worktop. In need of a long cord length, the pendant lights were ordered internationally and re-wired

Adjacent and open plan to the kitchen, but with the original lower ceiling, is the main dining area. The table is one of two original G-Plan dining tables which are used when the family entertain

Stone walls and a cement ﬂoor work together to give the room a relaxing ambience which is accentuated by views of the garden beyond. Much of the furniture here, and in the rest of the house, is vintage and has been sympathetically restored.

The staircase is surrounded by pockets of light, both from the faceted exterior and from the port holes above.

The staircase is surrounded by pockets of light, both from the faceted exterior and from the port holes above.

The entire upstairs, including the master bedroom, have ﬂoors of poured concrete, creating a cool, calm feel.

All upper rooms open on to the rear side of the faceted exterior, extending the geometric light patterns into the adjacent rooms, including this bathroom. 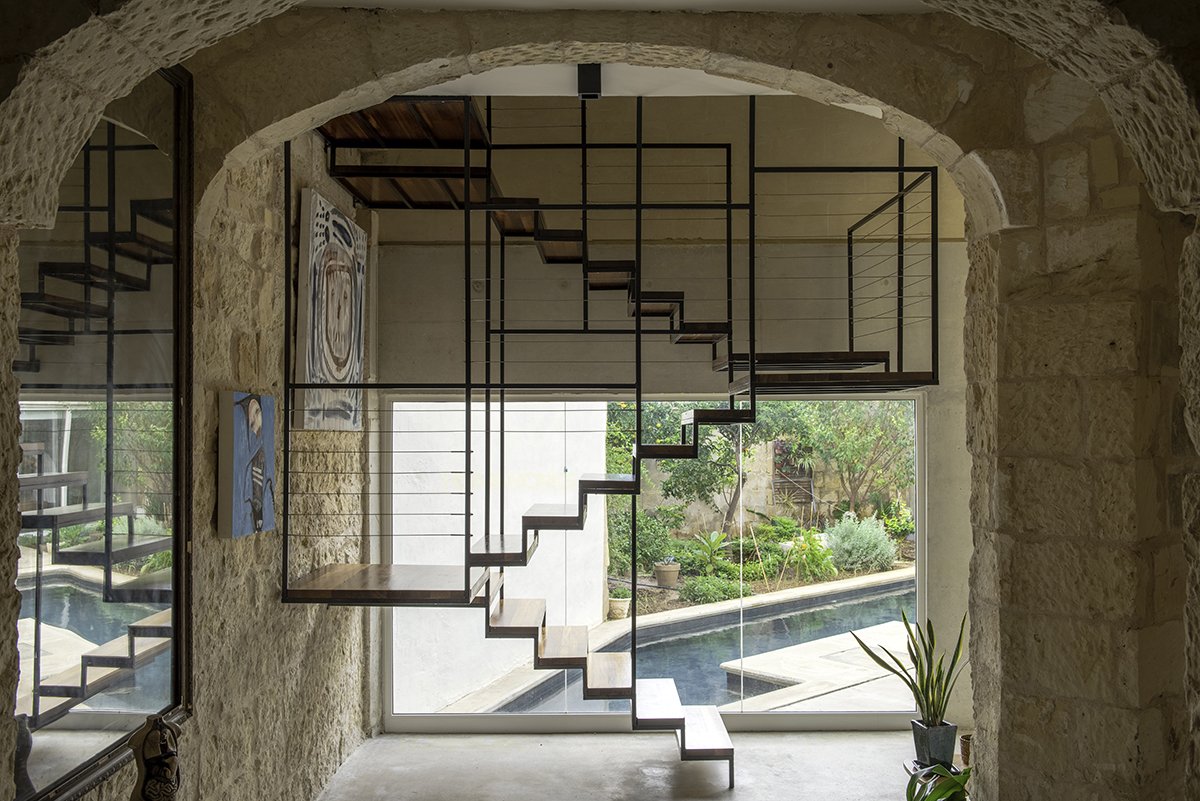 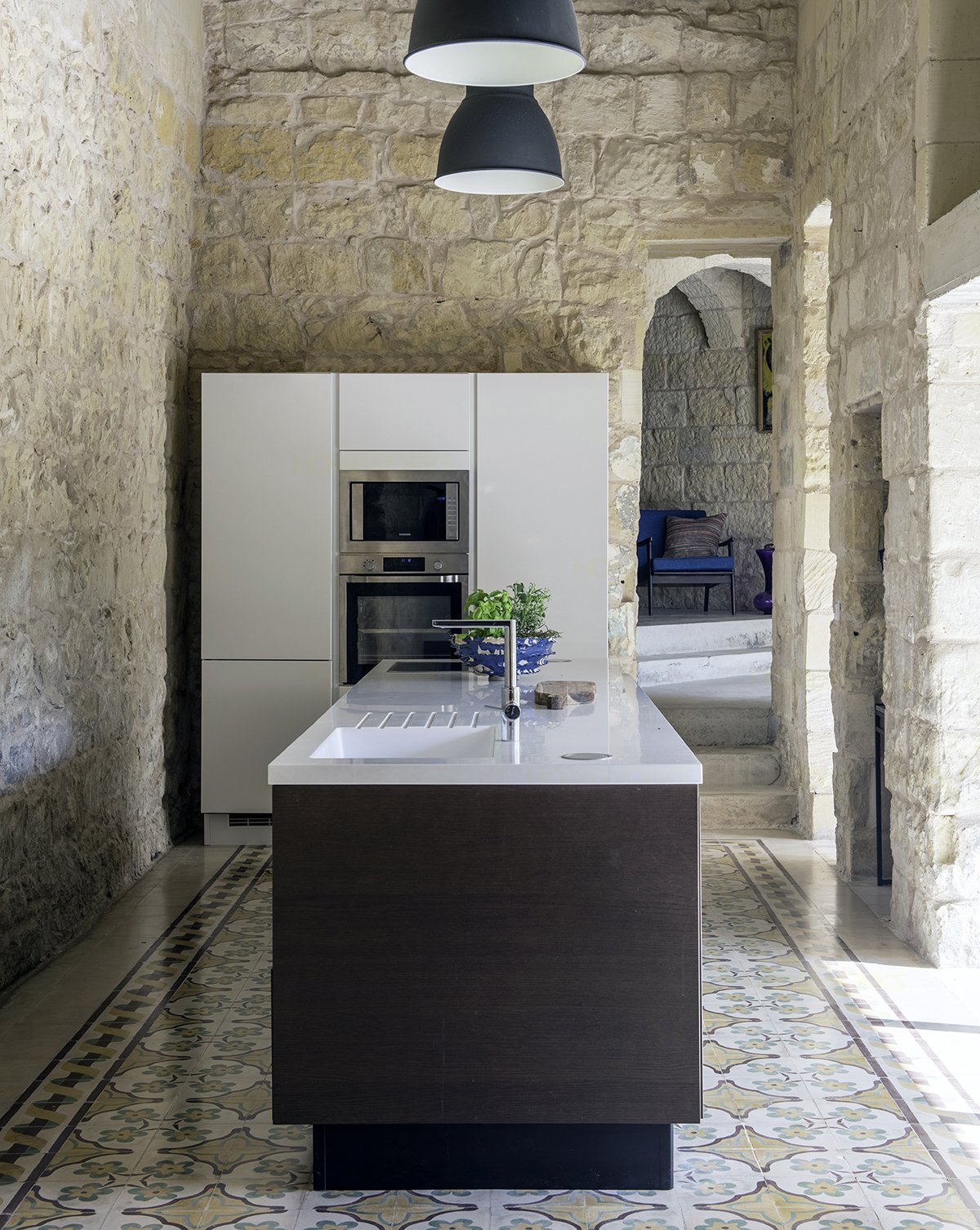 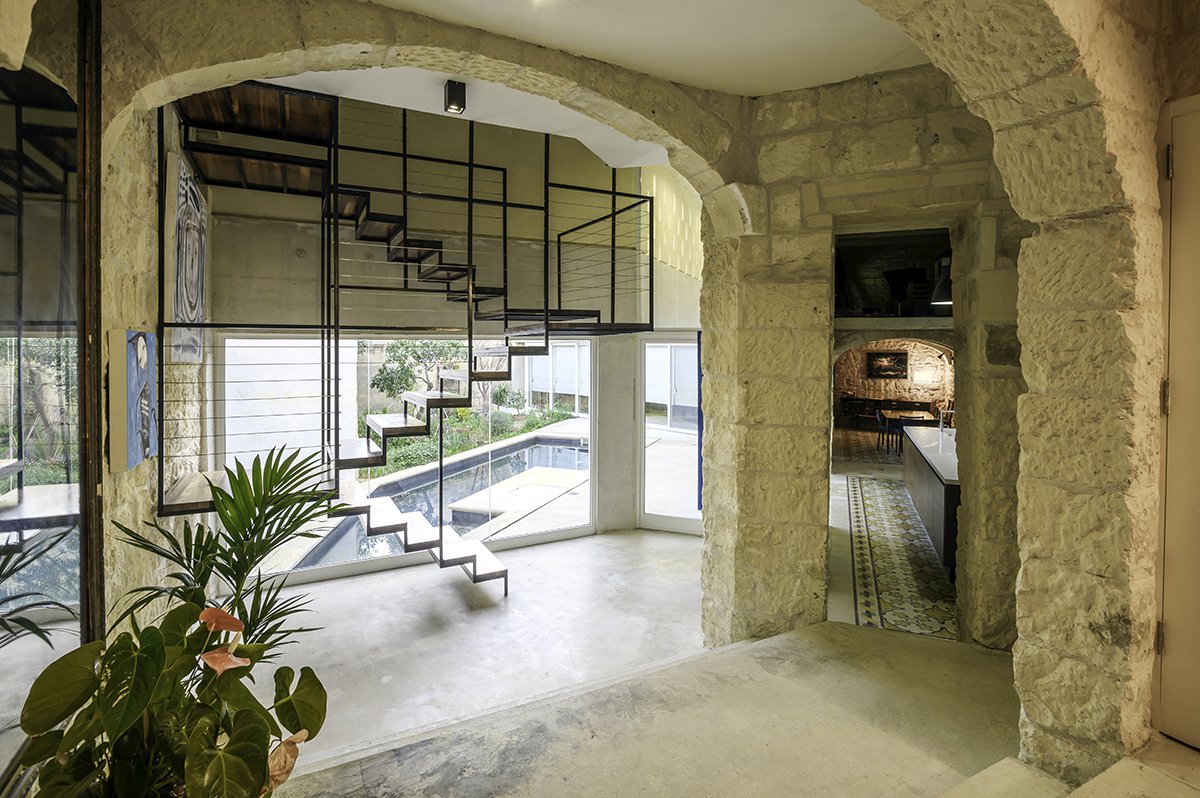 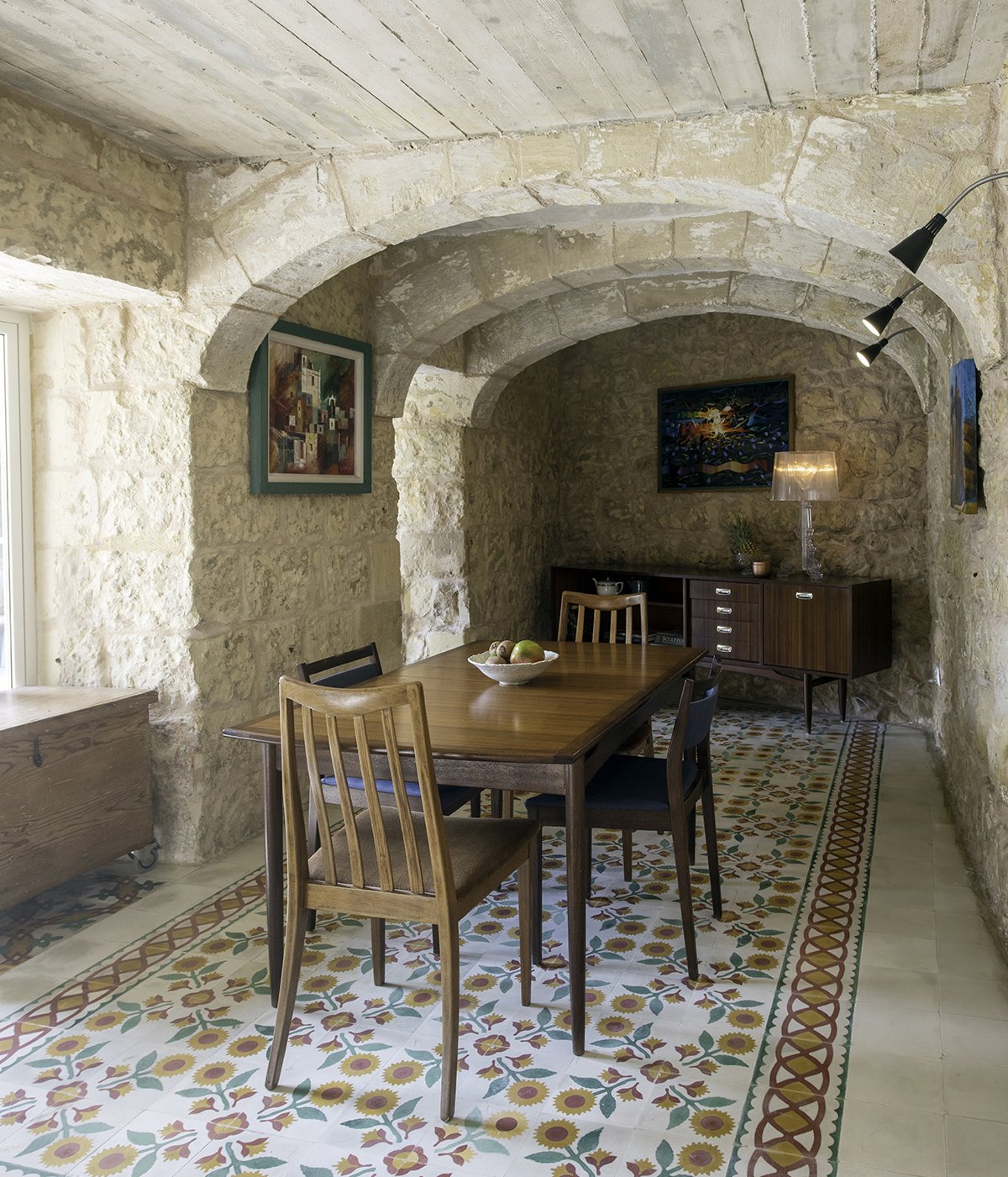 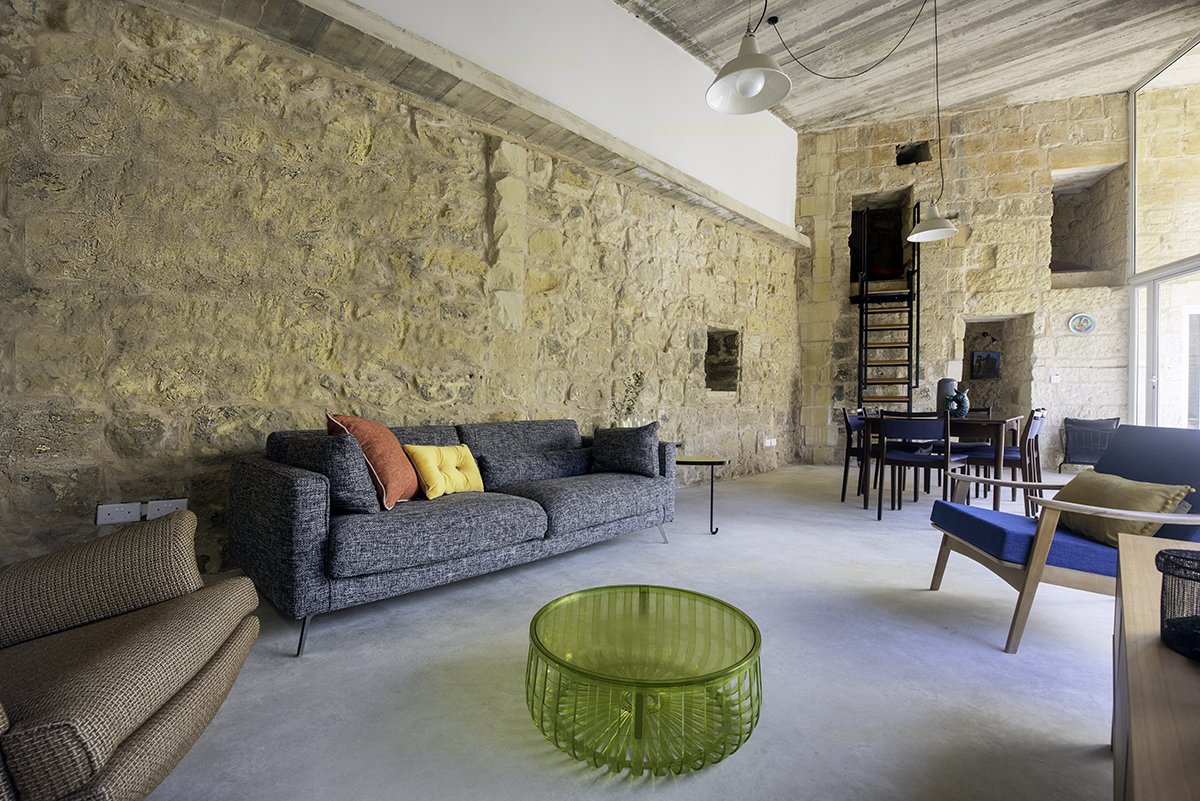 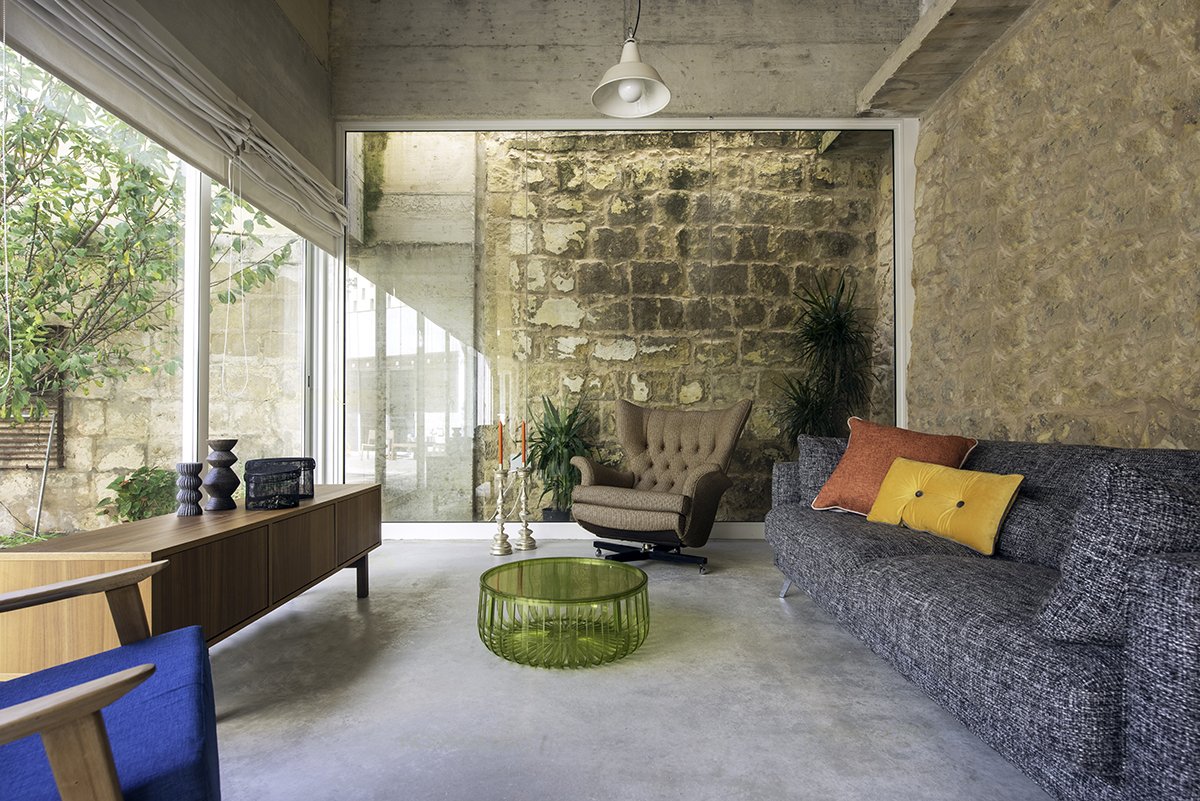 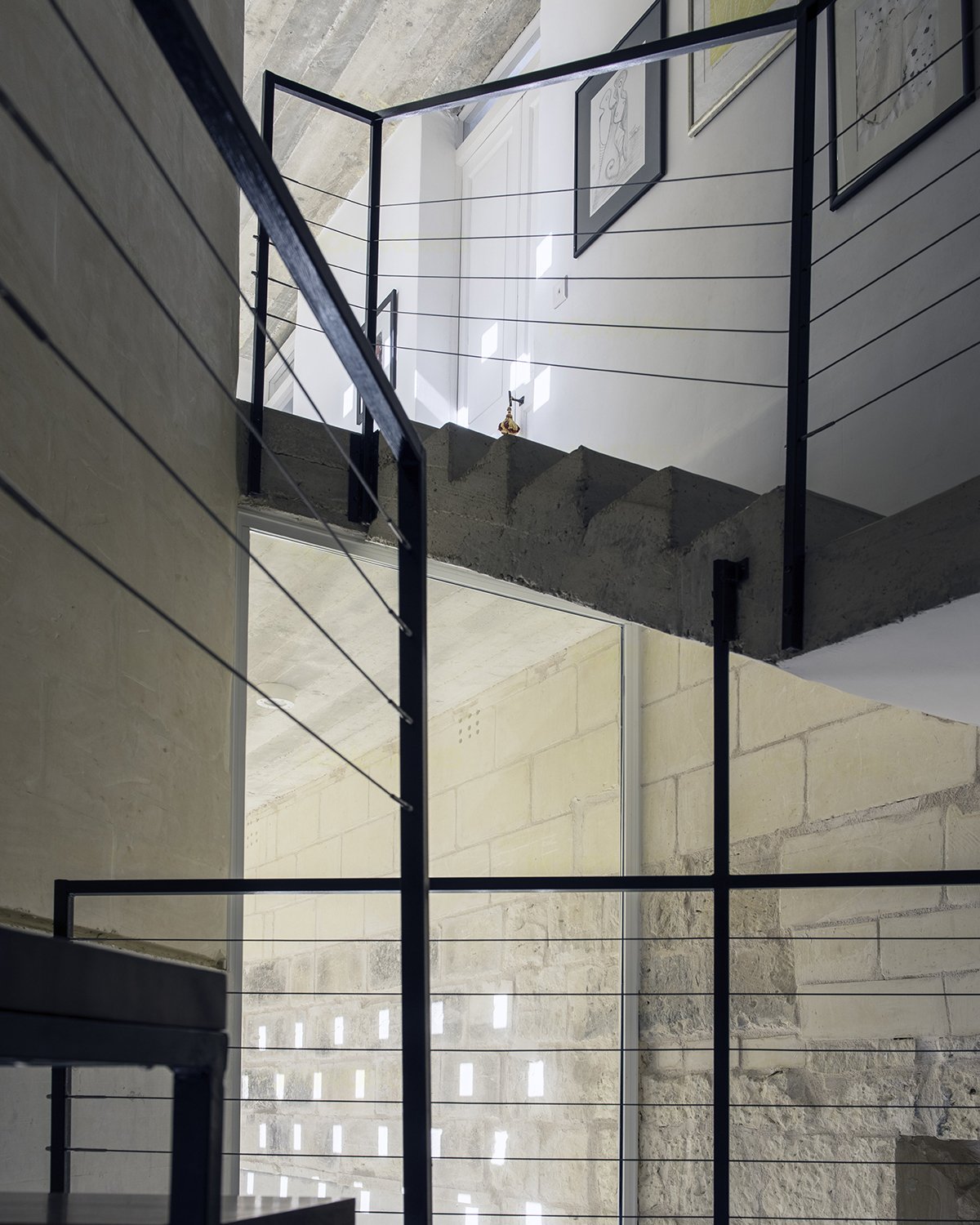 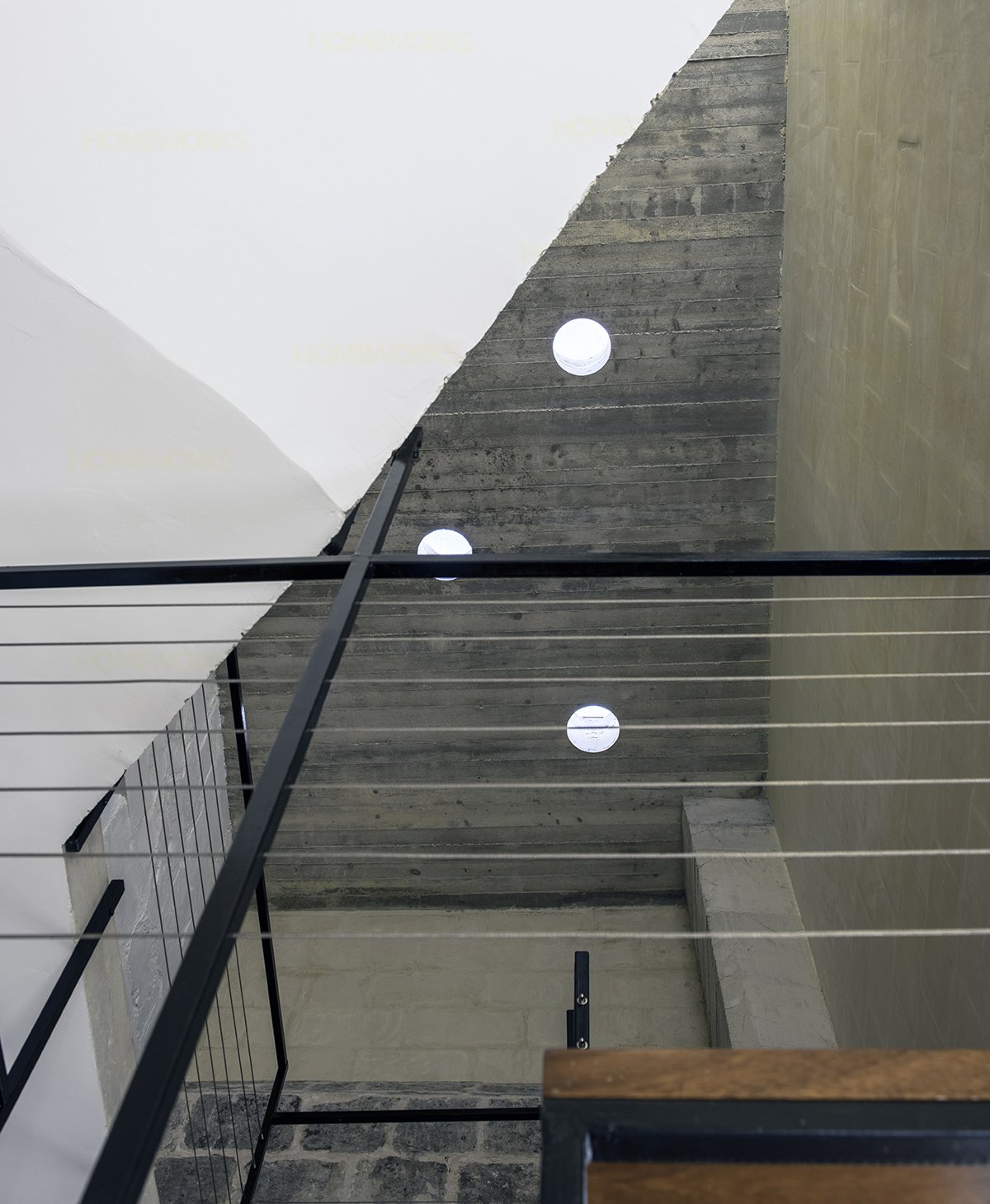 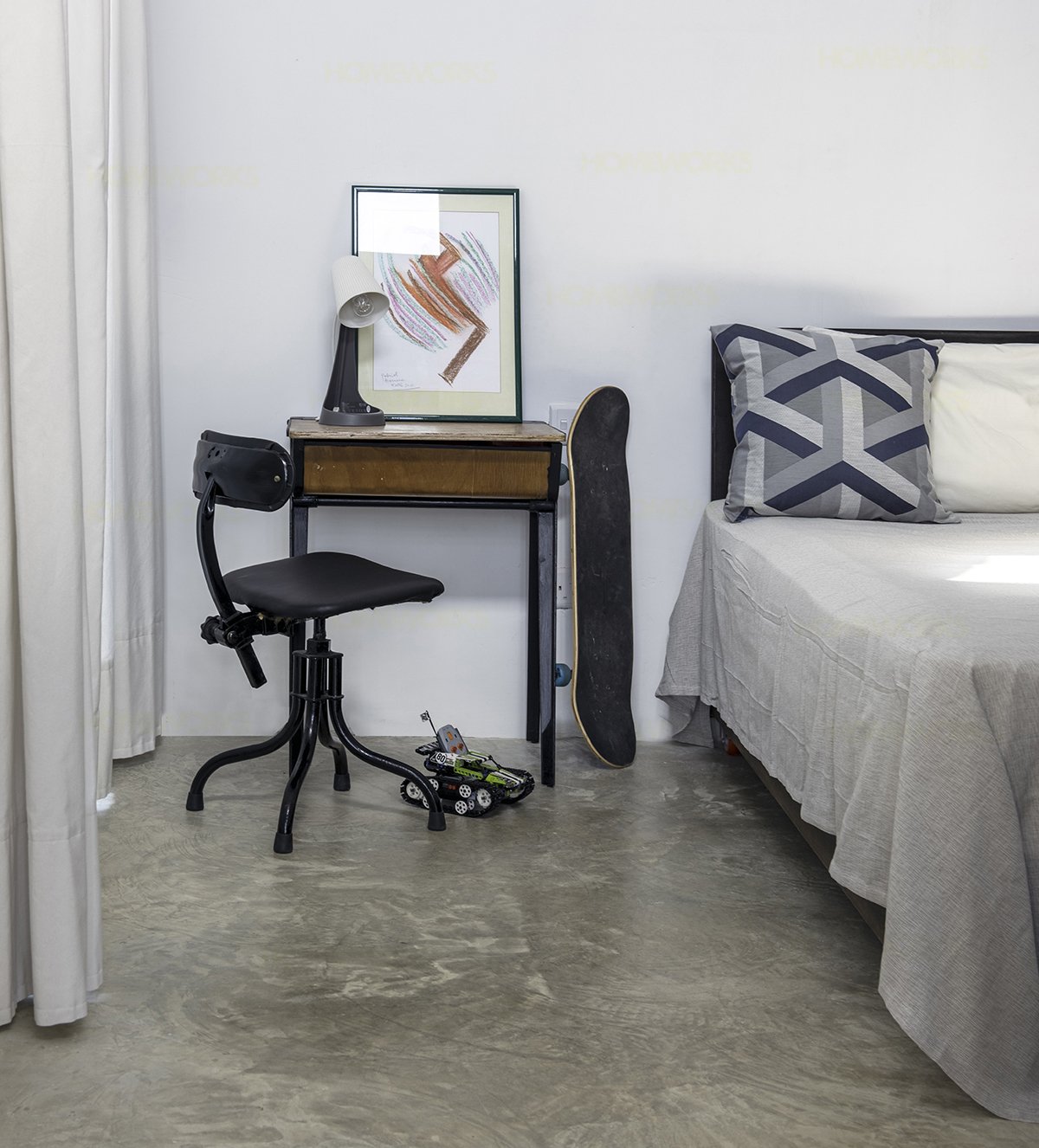 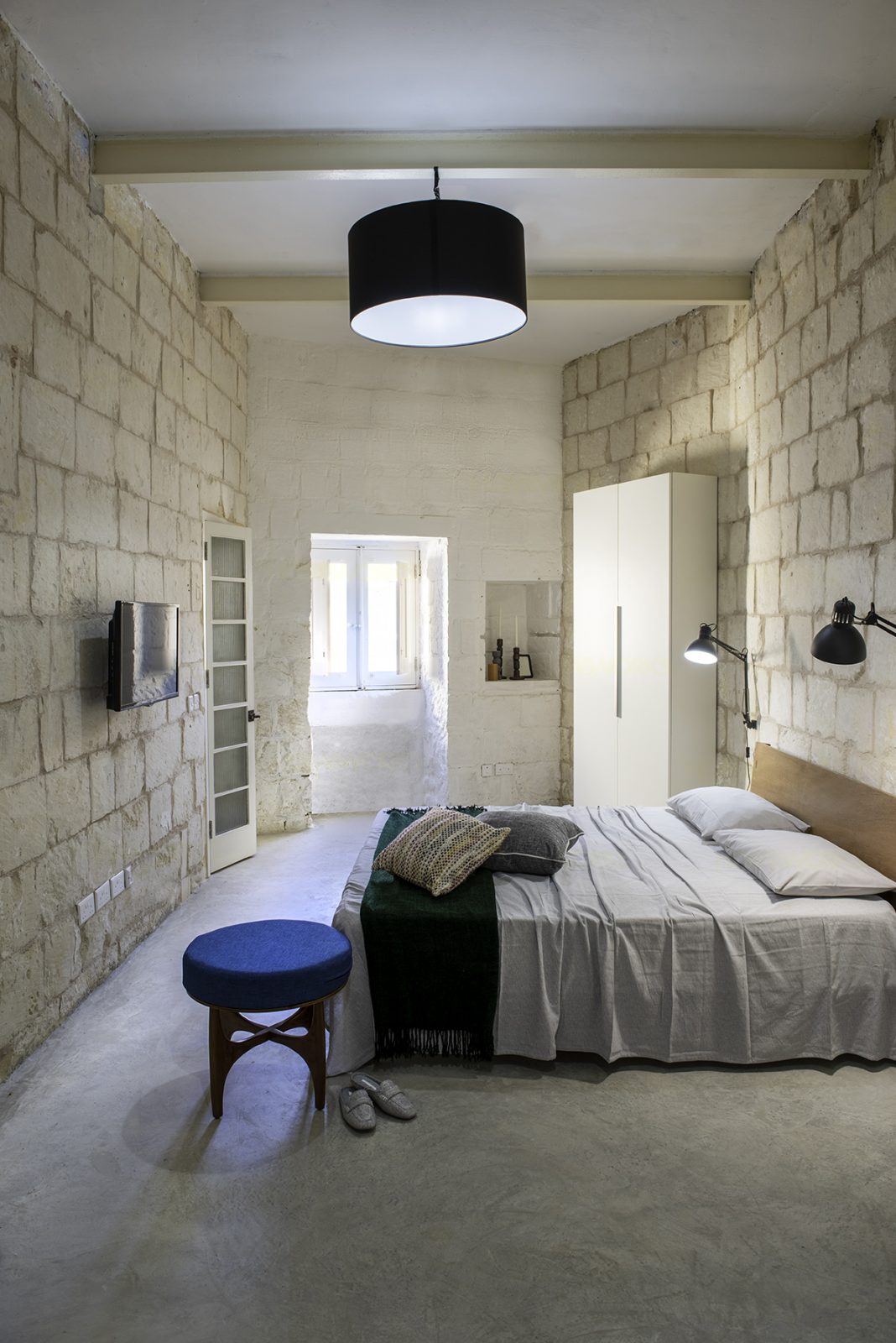 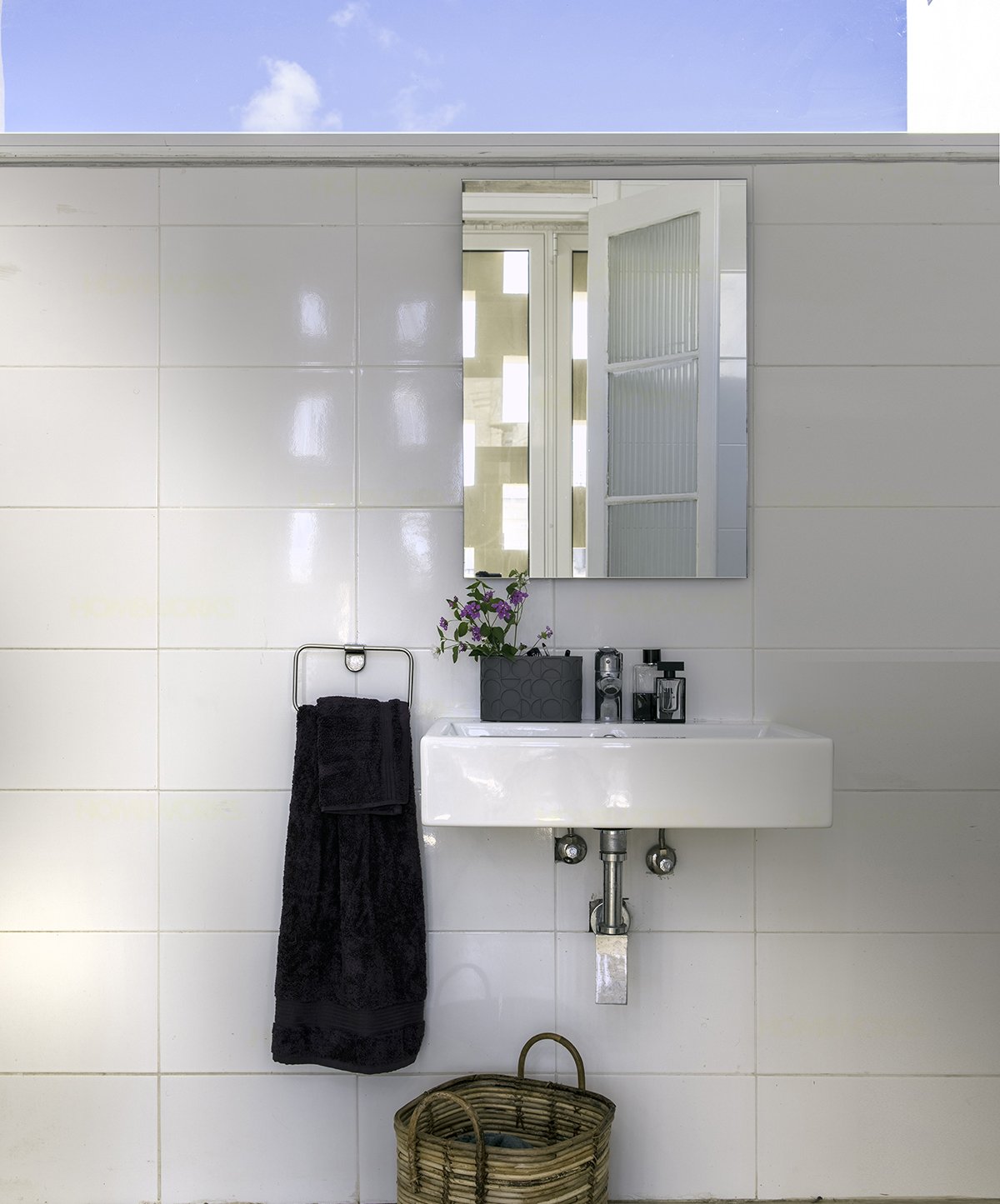