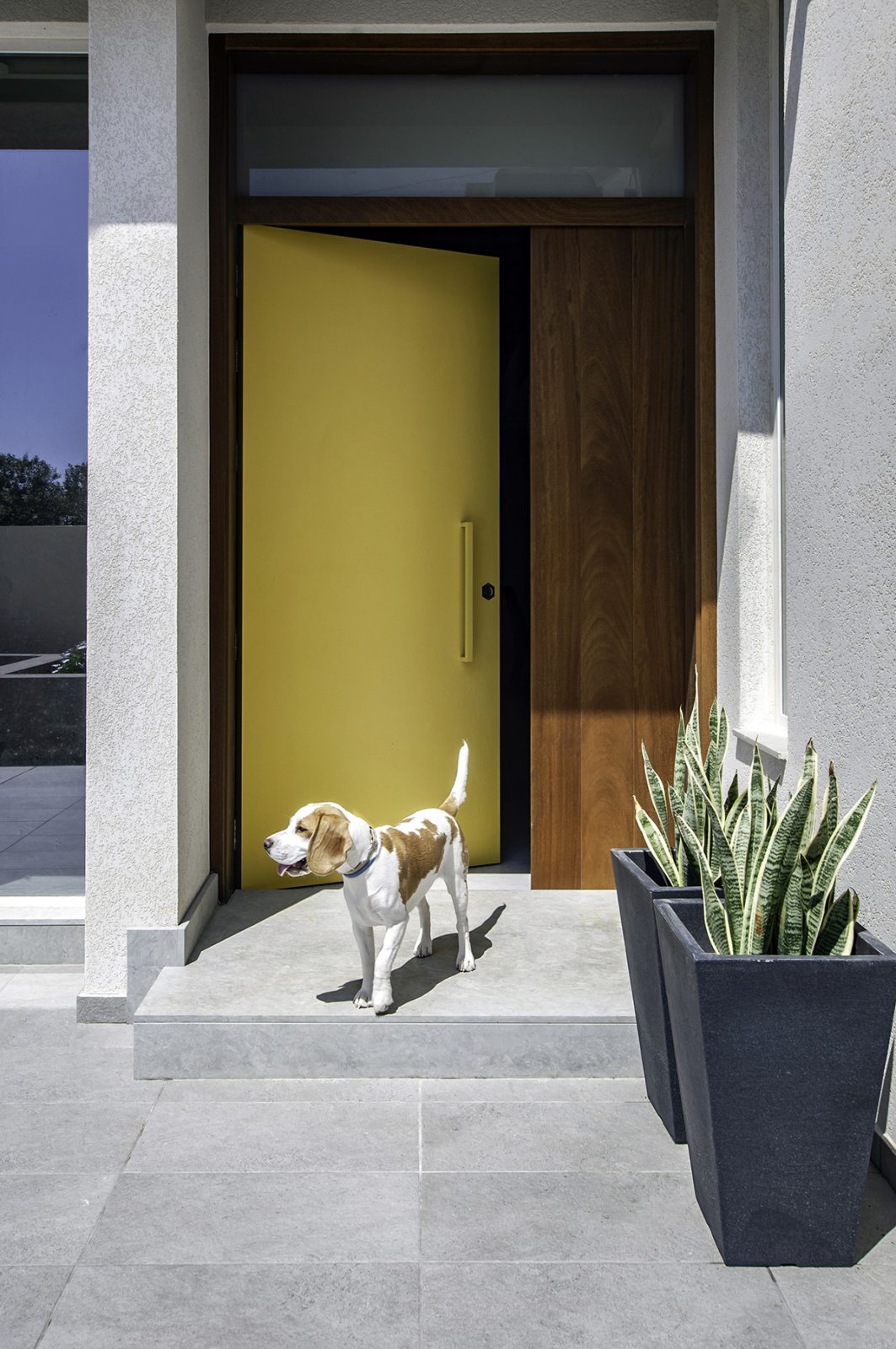 Interior designer Adrian Micallef took on this house in shell form which meant he had the challenge of creating a home from a space that was completely devoid of personality. The homeowners brief wasn’t too specific either – it revolved around materials and mood, which left the particulars to Adrian to decide upon. ‘Their brief was that they wanted an airy, light house with a touch of fun,’ he says. ‘They also liked my idea to combine an industrial effect of exposed concrete and American walnut.’
Before he could get down to the decorative side of things, however, he had to deal with the less attractive but crucial details that would make the home work. ‘It was a large and technical project, the electricity and plumbing needed a great deal of planning’ says Adrian. ‘Working with a large open space where concrete pillars and beams were required, the design of the soffits and ceiling needed careful thought and preparation as the design involved exposing some of the concrete.’
The exterior, too, needed consideration and Adrian added insulation to the facade to alleviate the impact of heat in the summer and cold in winter. Grey marble was also used, giving the property a touch of style and elegance.
In arranging the internal space, Adrian chose a large, open-plan ground floor, the kitchen at one end, leading onto the dining area and the living room beyond, making the space comfortable, airy and well laid out whether for everyday living or entertaining guests.
Along with the open-plan living area, large apertures that look out over the garden, along with a double-height ceiling over the kitchen, give a real sense of space. Within this, Adrian managed to create warmth by his choice of materials which included wood-effect tiles and American walnut cladding. The added texture of the concrete ceiling works to keep the space feeling unique and interesting.
The kitchen is given the wow factor with a custom-designed light that was designed by Adrian (as were most of the furniture and fittings). Extending down through the double-height space, it adds an eye-catching sculptural element.
The concrete stairs that lead up to the first floor are another feature. ‘You could see them as soon as you walked in and I immediately knew I could turn them into something special,’ says Adrian. So he built a false wall and clad it in wood, and also designed a window within an existing wall through which you can see the stairs, but which also allows light to pass through.
The colour palette throughout is neutral with blues and a splash of yellow. ‘I wanted blue to reflect the sky and the pool,’ says Adrian. ‘And the yellow sparks it up a bit, and makes it feel fun and happy.’

The vibrant yellow of the front door works beautifully with both the Iroko wood surround and grey marble step, creating a chic welcome

Tiles, both concrete and wood-effect, along with artificial turf create an attractive outdoor area

The beautiful blue of the pool, as well as the sky, inspired Adrian to use the shade inside

Wood-effect tiles and wooden shelving give warmth to the lounge area which features neutral walls and an exposed ceiling. The corner sofa is large enough to hold the vast space. A modern three-sided fireplace divides this space from the dining area.

A custom-made table in American walnut is teamed with fabric chairs. The painting on the left wall is by Adrian and is done in the palette of the house

American walnut used as an accent adds style to the kitchen. Within the upper shelving, Adrian has included a wine rack

Adrian designed the statement light that extends down through the double-height space, adding a sculptural element

On the wall is Venetian plastering which gives a marble effect without grouting. American walnut is teamed with yellow and a round mirror is the finishing touch

Calacatta marble along with concrete tiles makes for a tranquil bathroom. The unit is custom-made, the shade of blue picking up the tones of the marble 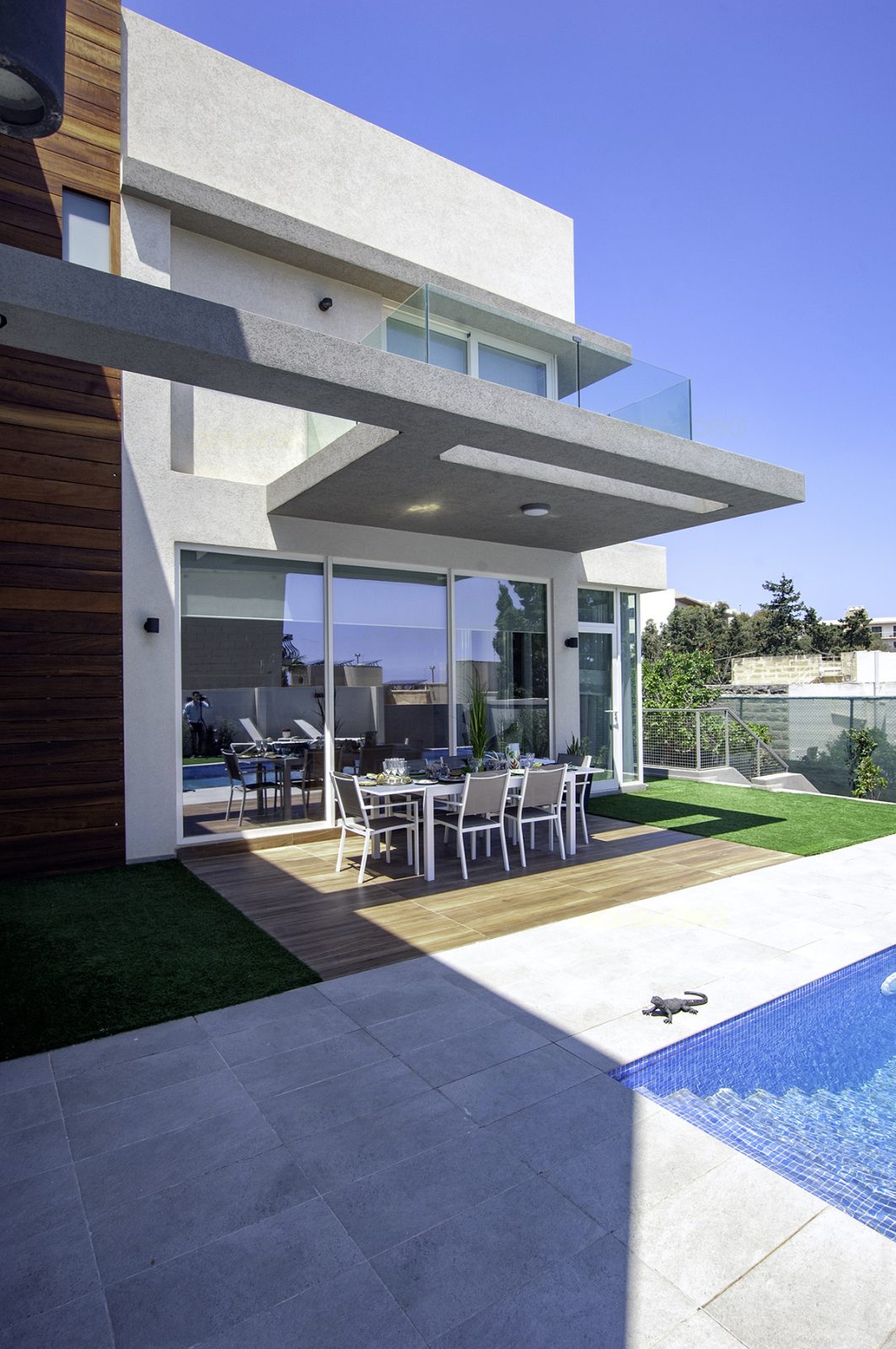 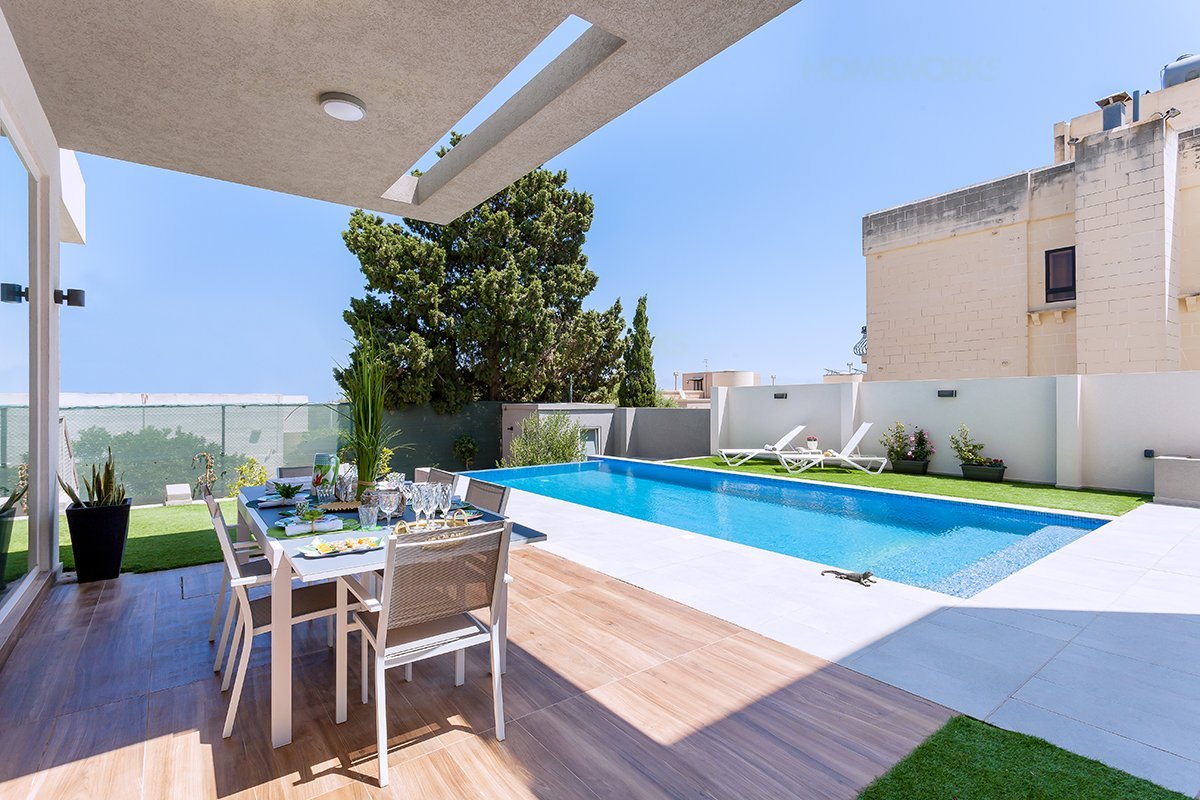 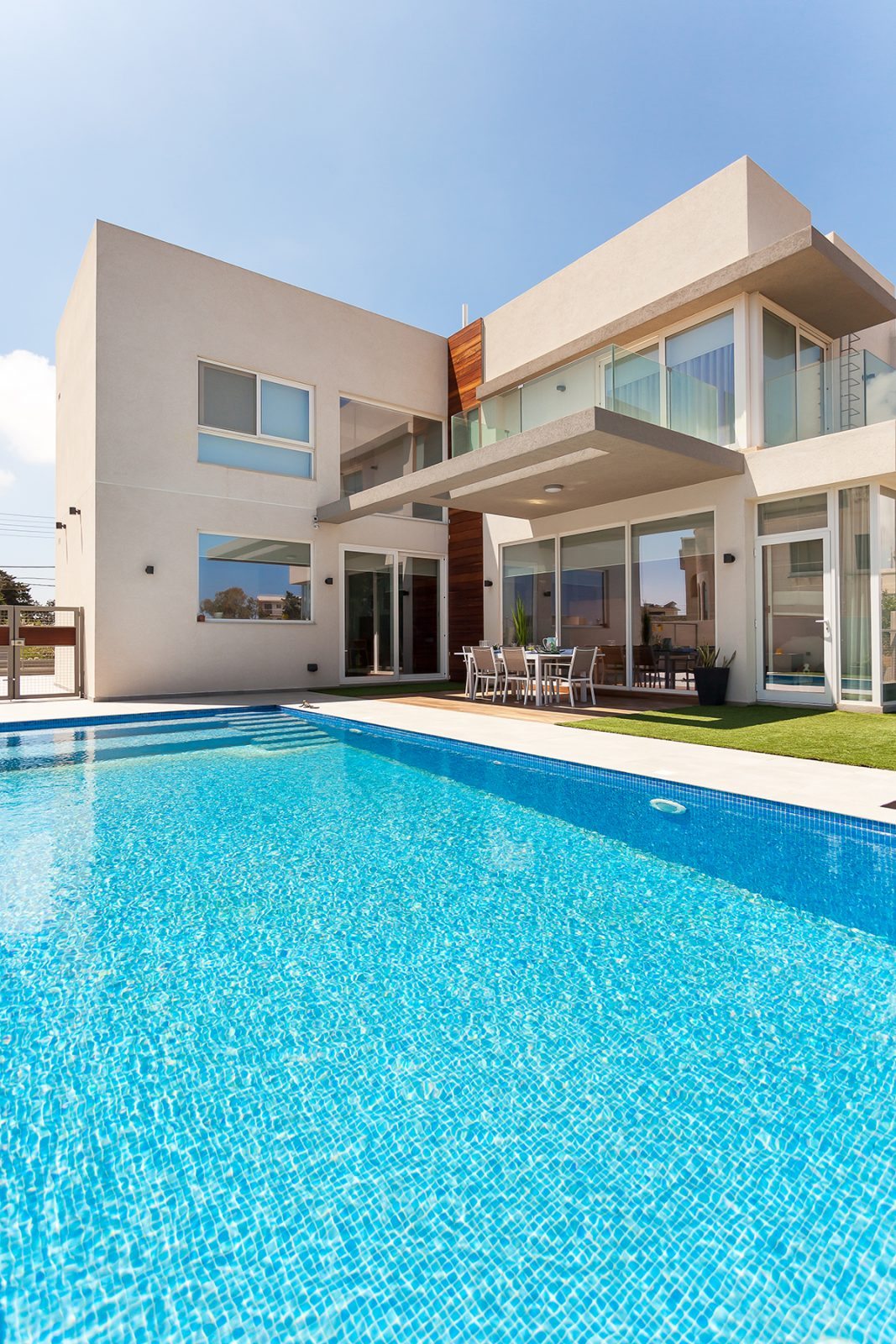 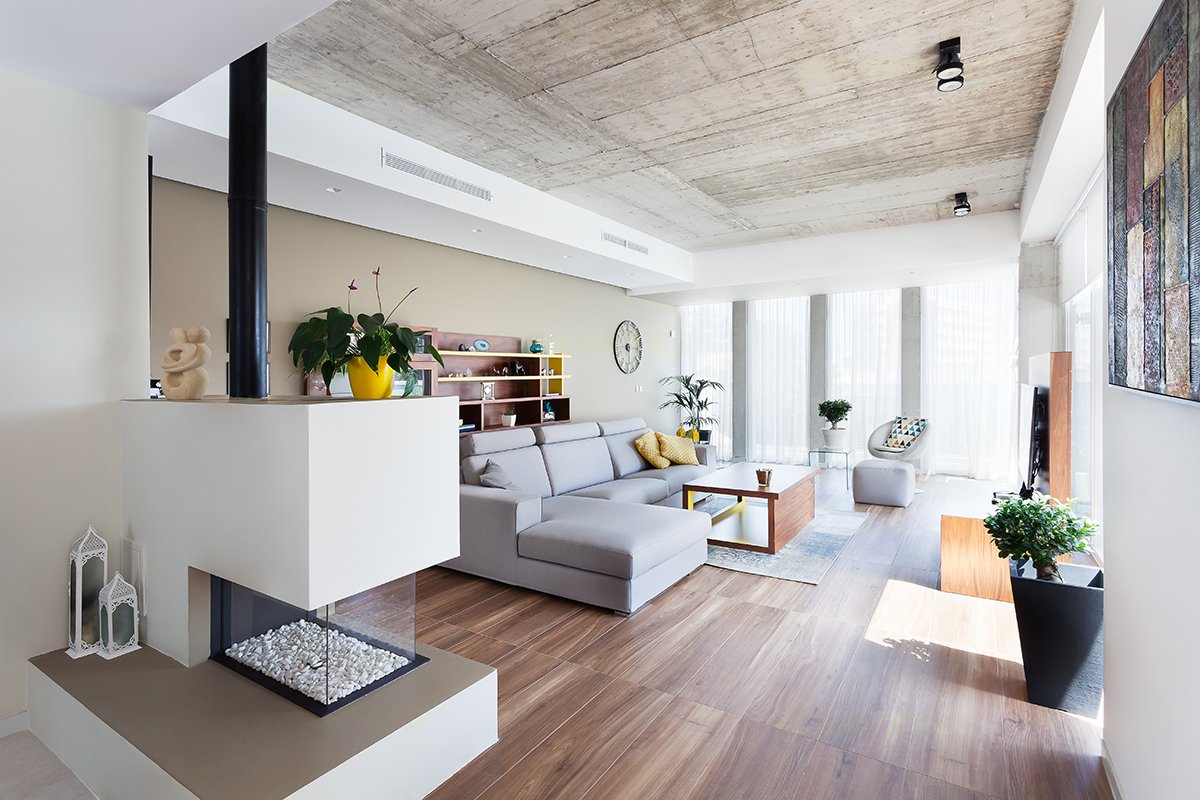 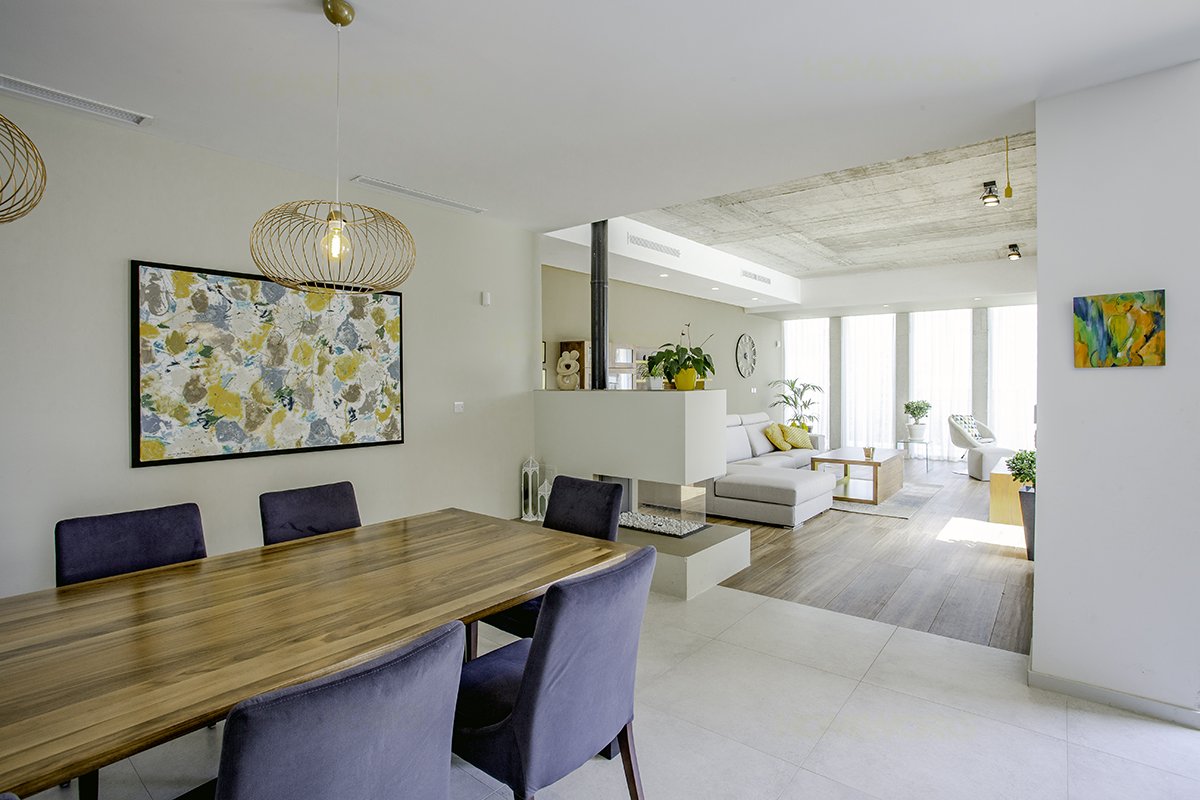 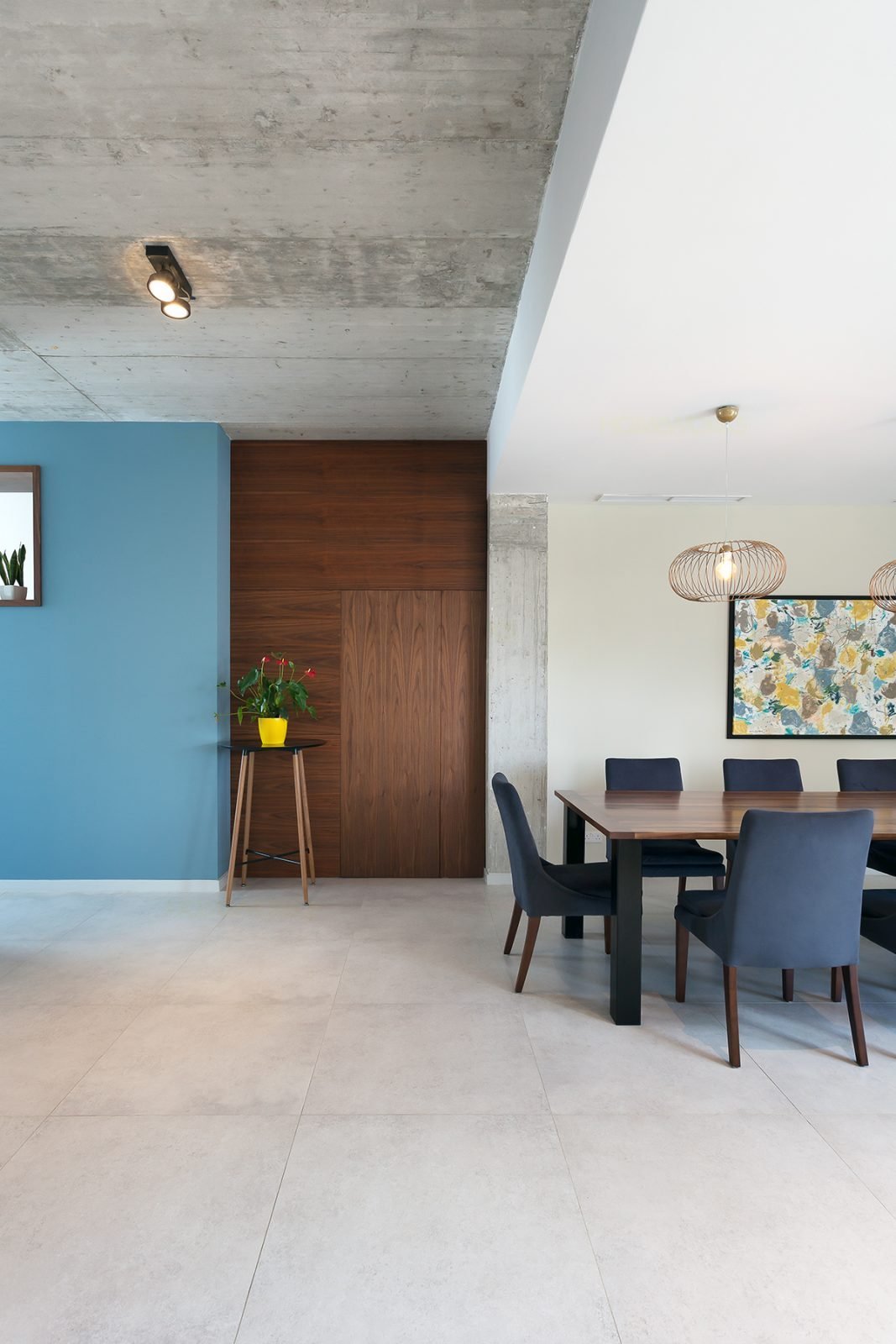 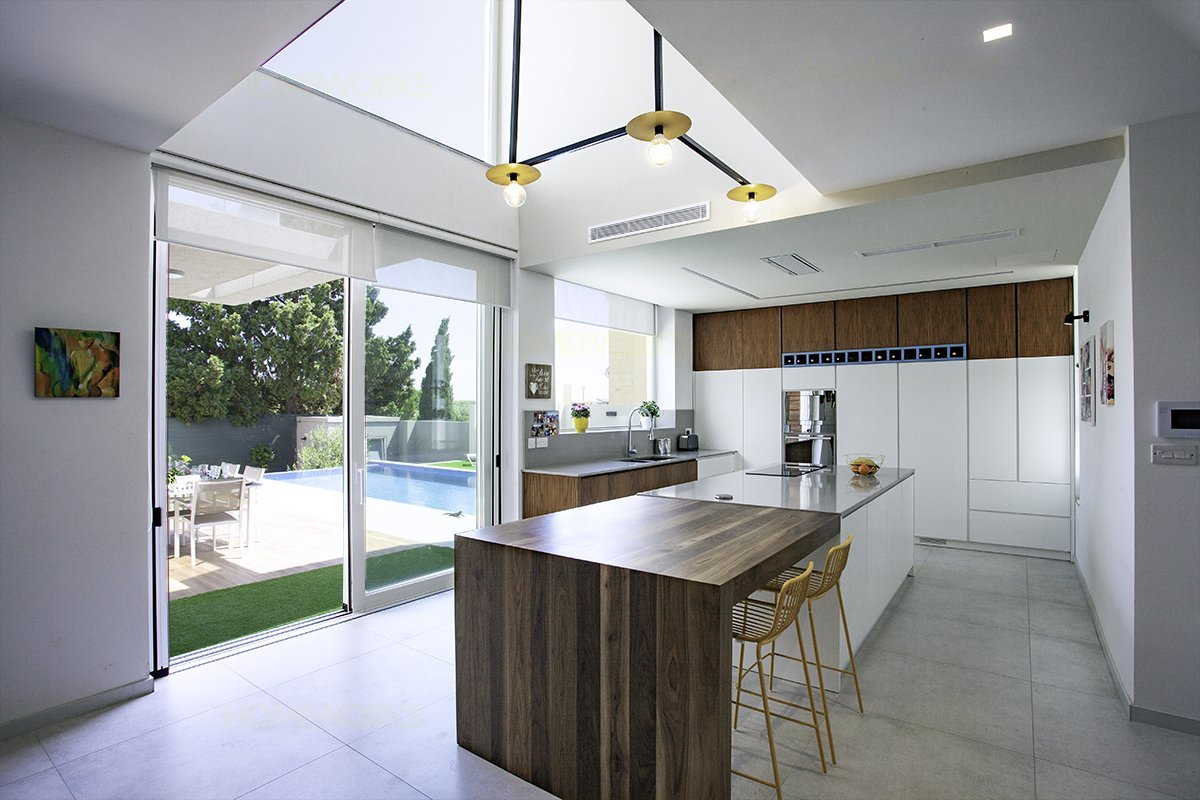 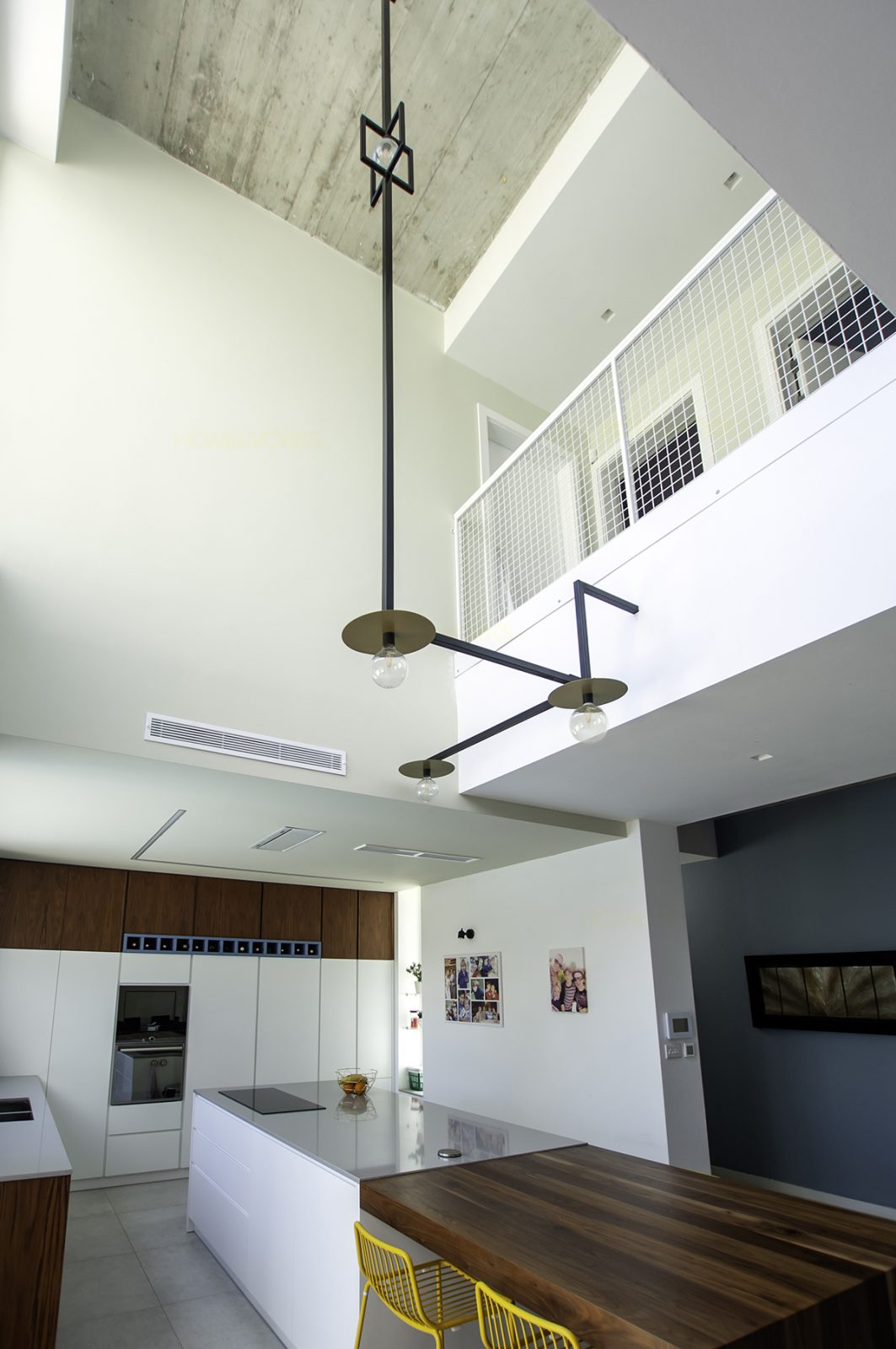 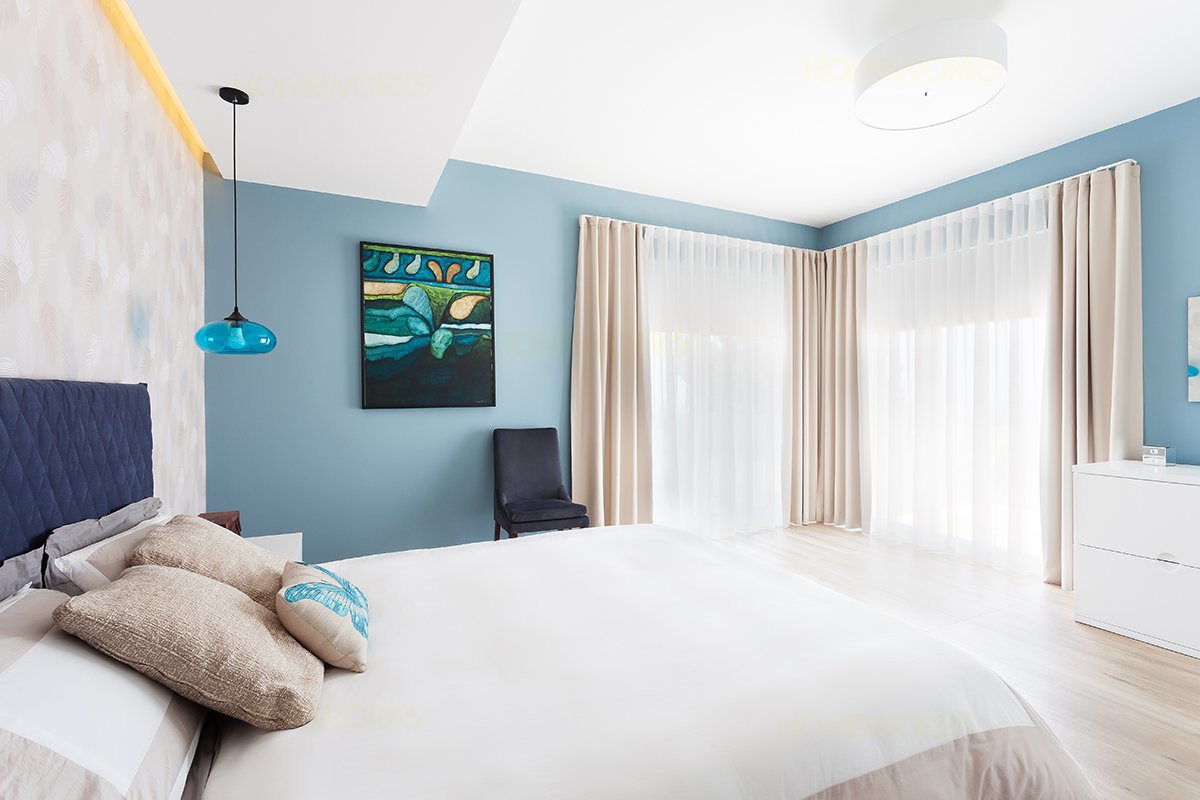 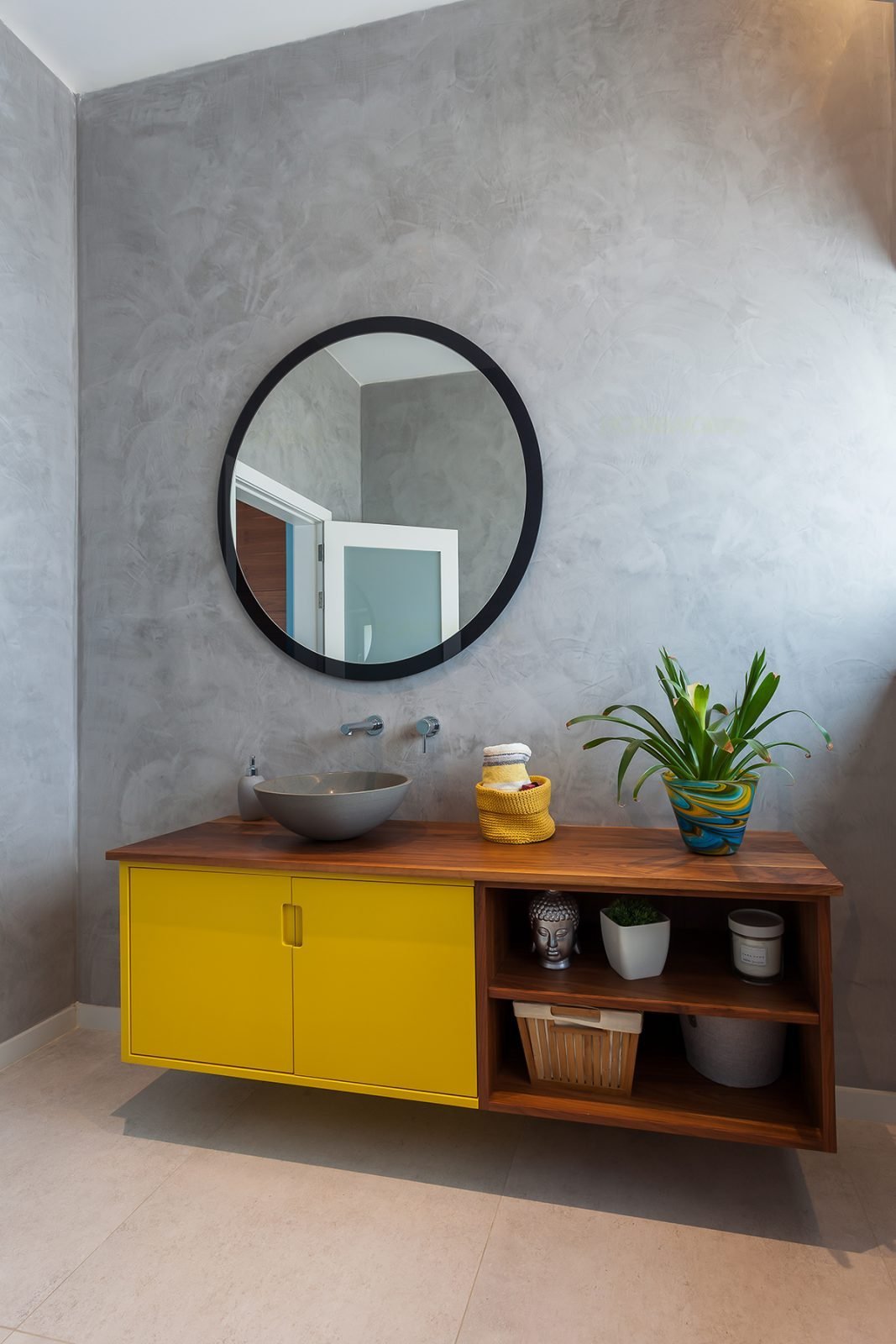 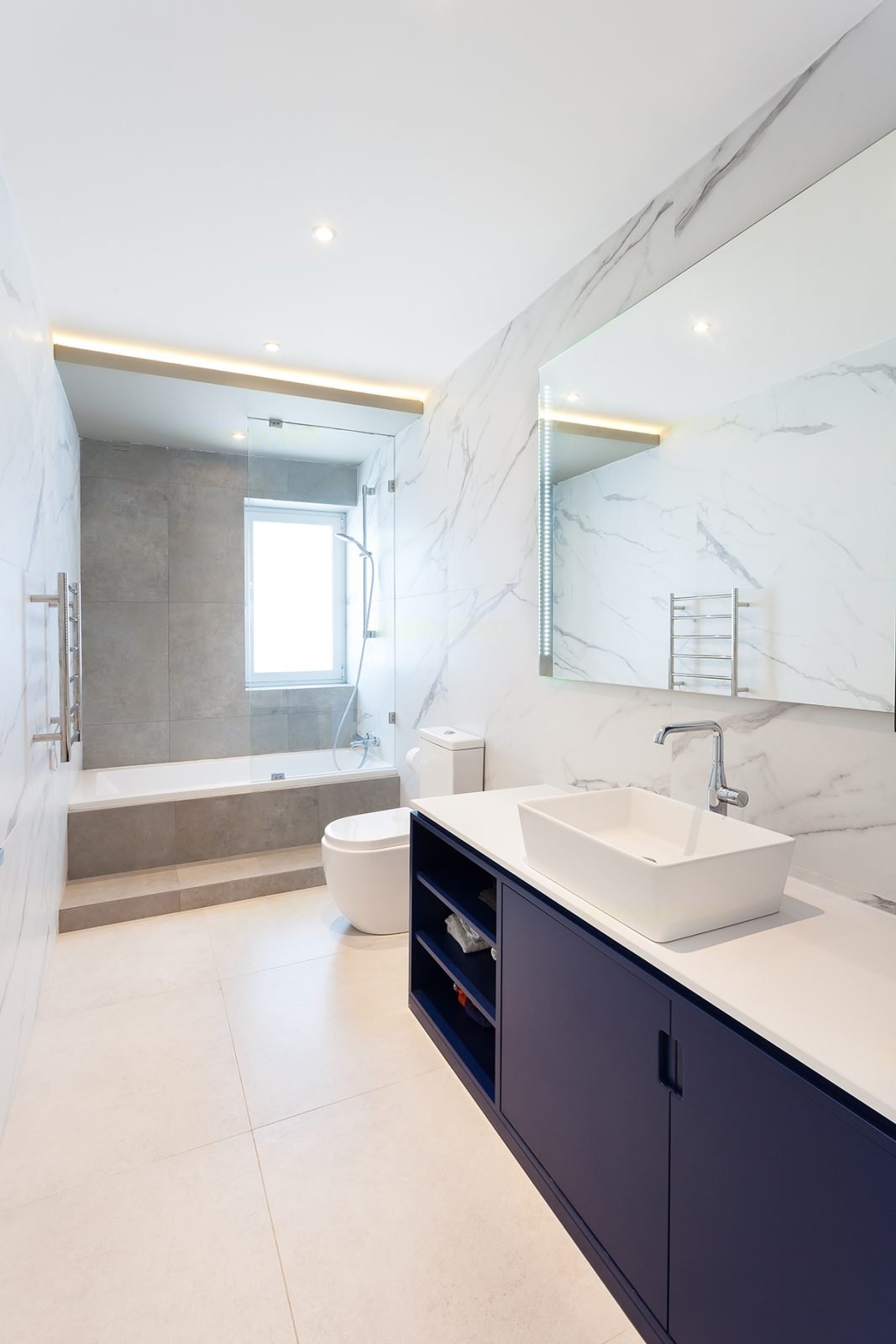