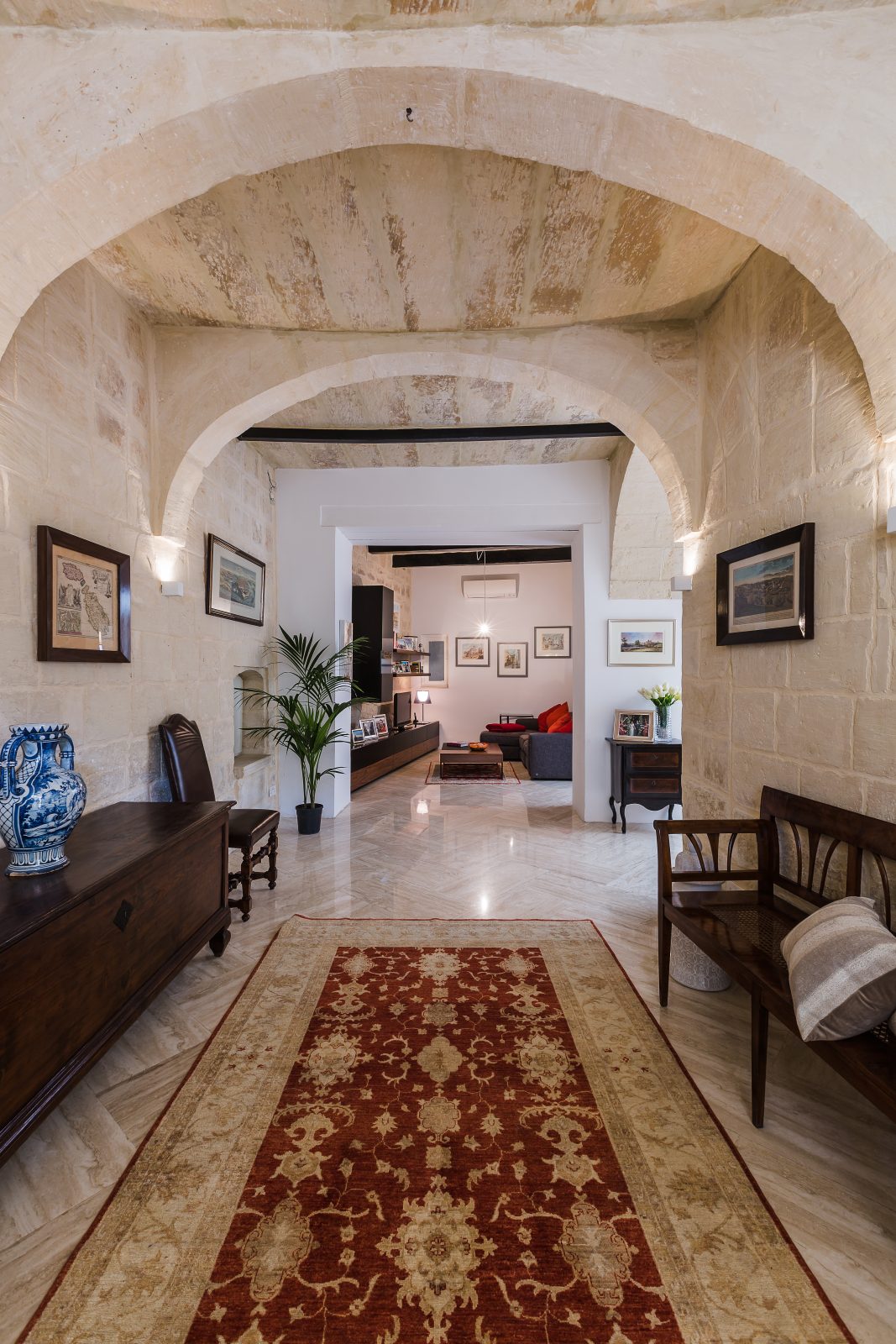 Stephanie and Chris Camilleri had been hunting for a house in the area of Lija for two years before they found this one. ‘We could never find anything we liked in our budget, but then, finally, we saw this house,’ says Stephanie. It ticked most of the boxes – as well as the location being spot on; it was a house of character with the stone in good condition. ‘It was my husband’s dream to have a house like this, but it also fitted our sense of style which is classic with a modern twist,’ says Stephanie. The bedrooms were a good size with high ceilings. The house was full of light thanks to the skylight inserted in the centre of the house, pulling light down from above the first floor to the ground.
However, the big downside to this house was the size of the original kitchen which the couple considered too small, and they almost didn’t buy the house for this reason. ‘It was always our wish that the kitchen be the main focus of the house since we believe it to be the heart of a home,’ says Stephanie.
Stephanie’s brother, though, is architect Alan Galea and he suggested relocating the kitchen to the space beneath the skylight, making it the room around which the other two living spaces pivot. This is what has been done, and this is one architectural move has ensured a home that works perfectly for the couple.
Making the house habitable, however, was a longer and, at times, more complicated process. As with many older properties, it had to be completely re-wired and re-plumbed so the entire ground floor was reduced to a shell before the re-building could commence. The issues of damp and humidity were addressed with a layer of concrete as well as a membrane, beneath the travertine Navona tiles.
The end result, though is elegantly stylish. The flooring downstairs is entirely travertine by Halmann Vella, the natural material complementing the stone. Laid in a herringbone pattern, it immediately gives the area character. ‘Alan suggested using this pattern to help disguise the fact that the rooms are irregular shaped,’ says Stephanie. ‘There are also no walls parallel to each other downstairs!’
Step through the front door to find a large welcoming entrance with original stone walls and arches which were treated and re-grouted. The room leads to the living room, decorated with modern custom-designed furniture, contrasting against the classic antique style of the entrance. Follow the light to the right, and this is the kitchen, a wonderful space with natural daylight and arguably the home’s strongest feature. The island is used as a clear worktop and place to eat, and two sets of tall cupboards, one for appliances, the other as a pantry, balance the wooden look, with plain white glossy units on the wall much less intrusive.
The dining room is found towards the back of the house, and this is where one finds the most frustrating part of the project – the huge glass door that swings and slides open to the yard. ‘It seems like such a simple idea, but it took 13 months and three different companies to get it right,’ says Stephanie. It was worth it, though, as when the door is open the dining area merges into the yard and they have an inside-outside feel. ‘In warm weather, I can extend the table as needed,’ says Stephanie.
Upstairs feels luxurious as the corridor that leads to the bedrooms is open so as not only do you get the benefit of the light, you can look down onto the kitchen.
The ensuite bathroom of the master bedroom is contained behind opaque glass, which allowed the room to gain an extra few centimetres – crucial in a small bathroom – but also keeps the room feeling bright.
The transformation was a year in the making, but now, having moved in and lived in it for many months, the travails are forgotten. ‘We couldn’t be happier with the home that we built,’ says Stephanie.

The series of stone arches, having been cleaned and re-grouted, beautifully lead into the heart of the home. The furniture style here is traditional but becomes modern as one goes on. The travertine floor, laid in an interesting herringbone pattern,is from Halmann Vella.

A separate room around the corner from the kitchen and living room, it is dominated by the antique table which is extendable. The sideboard was designed by Alan following Stephanie's brief. The floor-to-ceiling glass door which swings right out to be flush against the courtyard wall took many months and three contractors to get right - it was ultimately done by Andrew Vassallo. Inside, the double-shade light fits with the mood. Tableware courtesy of OneTwoOne

From the kitchen area, the original arches can be seen, a contrast to the modern look of the cooking space. Glass vase from Left Bank.

The kitchen itself is from Joinwell. The island is used as a clear worktop and place to eat, and two sets of tall cupboards, one for appliances, the other as a pantry, balance the wooden look, with plain, white glossy units on the wall much less intrusive. The worktop is quartz and there is a glass splash-back.

The space was made light by clearing the skylight and making the space a more linear one by removing two arches (put in recently and so not original to the house) and replacing it with one squared off opening.

The long upstairs corridor is flanked by the original stone walls on one side, and the decorative balustrade on the other.

The original Maltese tiles give the room warm colour and are allowed to stand out by the uncluttered approach to furniture. A portion of the bedroom was separated off to become a small wet-room style bathroom. The glass doors gave the room extra valuable centimetres and also keeps the room feeling bright as the glass does not absorb light from the window. Pillows from NEXT.

The original Maltese tiles give the room warm colour and are allowed to stand out by the uncluttered approach to furniture. A portion of the bedroom was separated off to become a small wet-room style bathroom. The glass doors gave the room extra valuable centimetres and also keeps the room feeling bright as the glass does not absorb light from the window. Pillows from NEXT.

Situated off the bedroom, the dressing room is for both Stephanie and Chris. Once accessible from the corridor, the wall was closed off and an extra shelving unit for storage added. 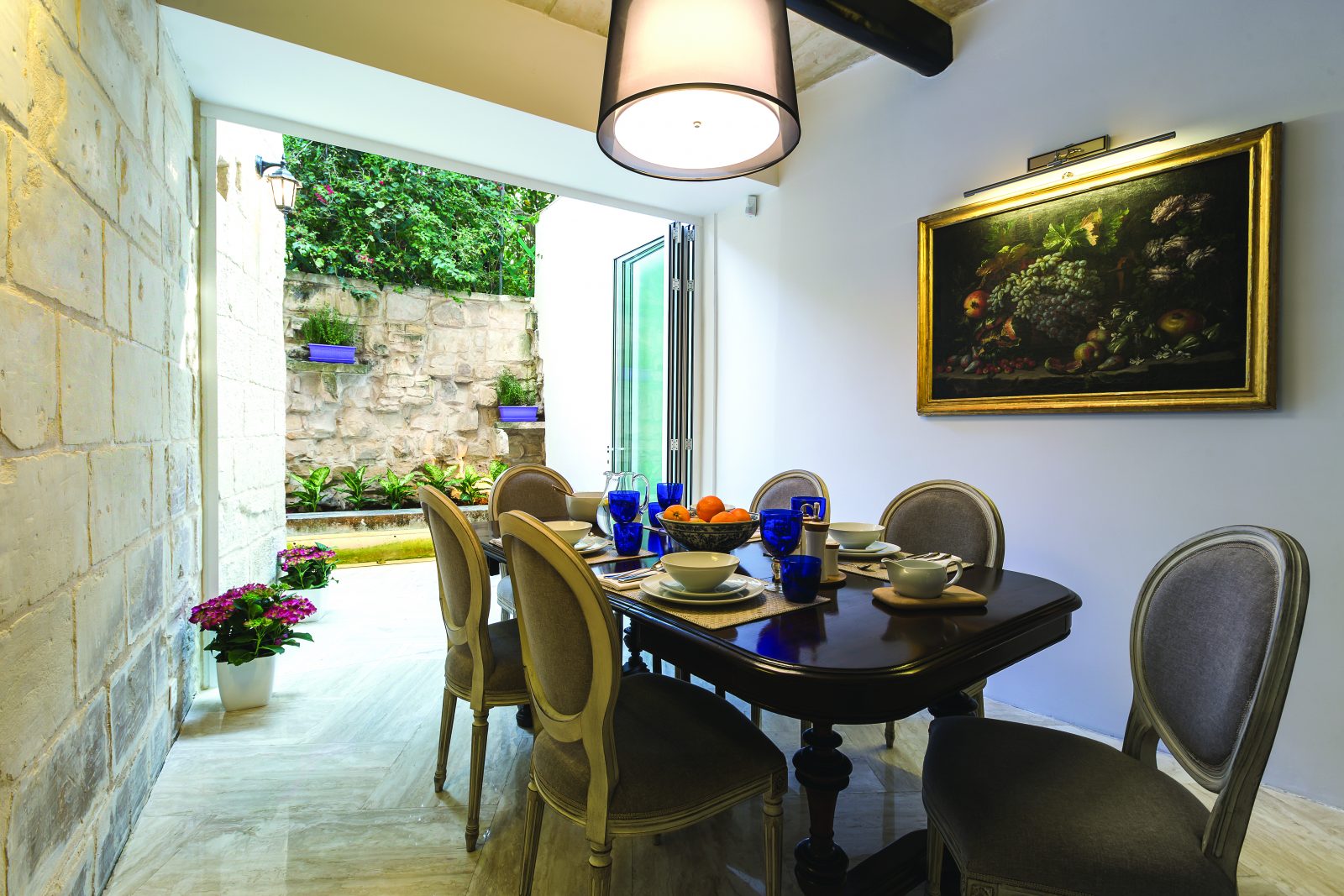 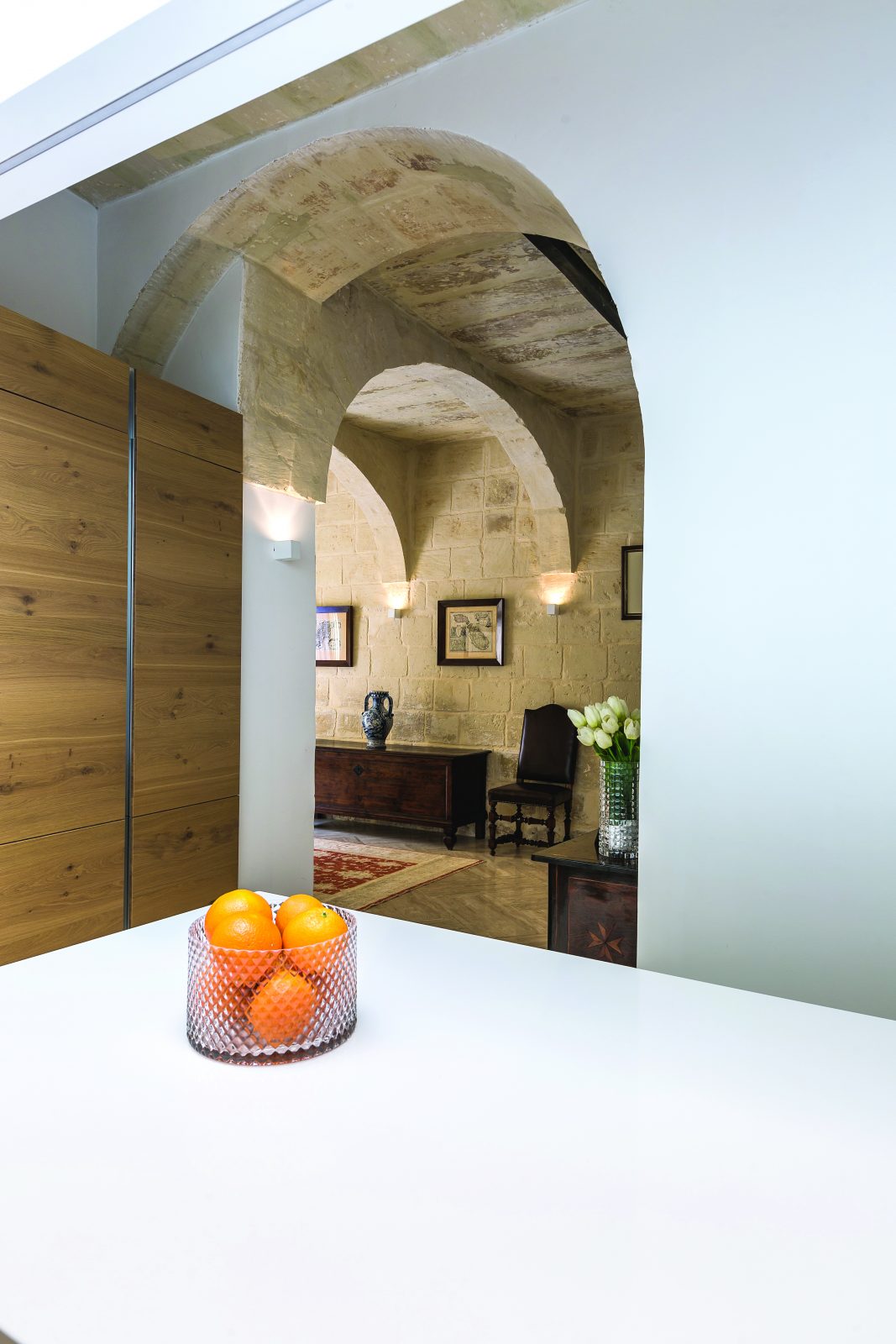 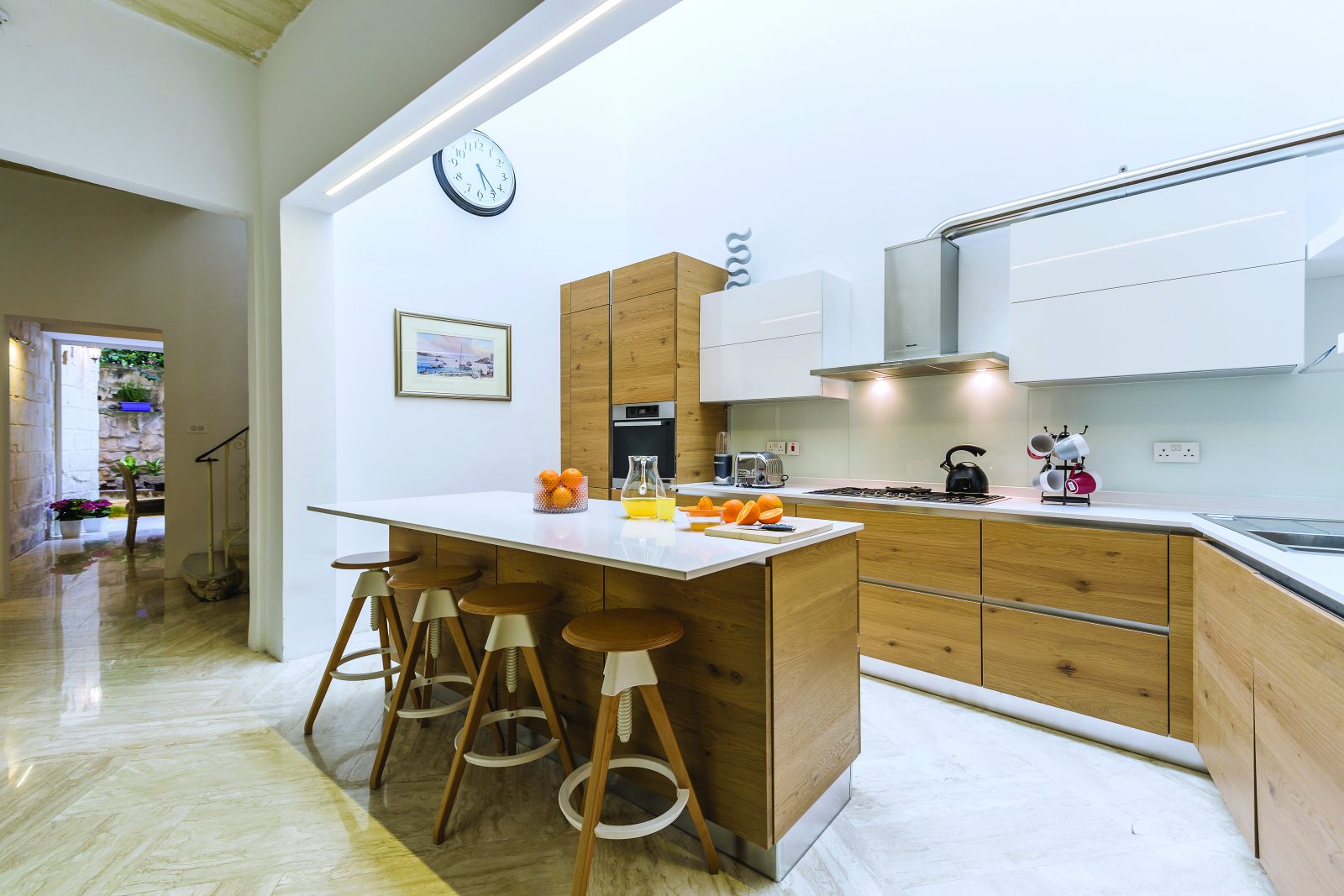 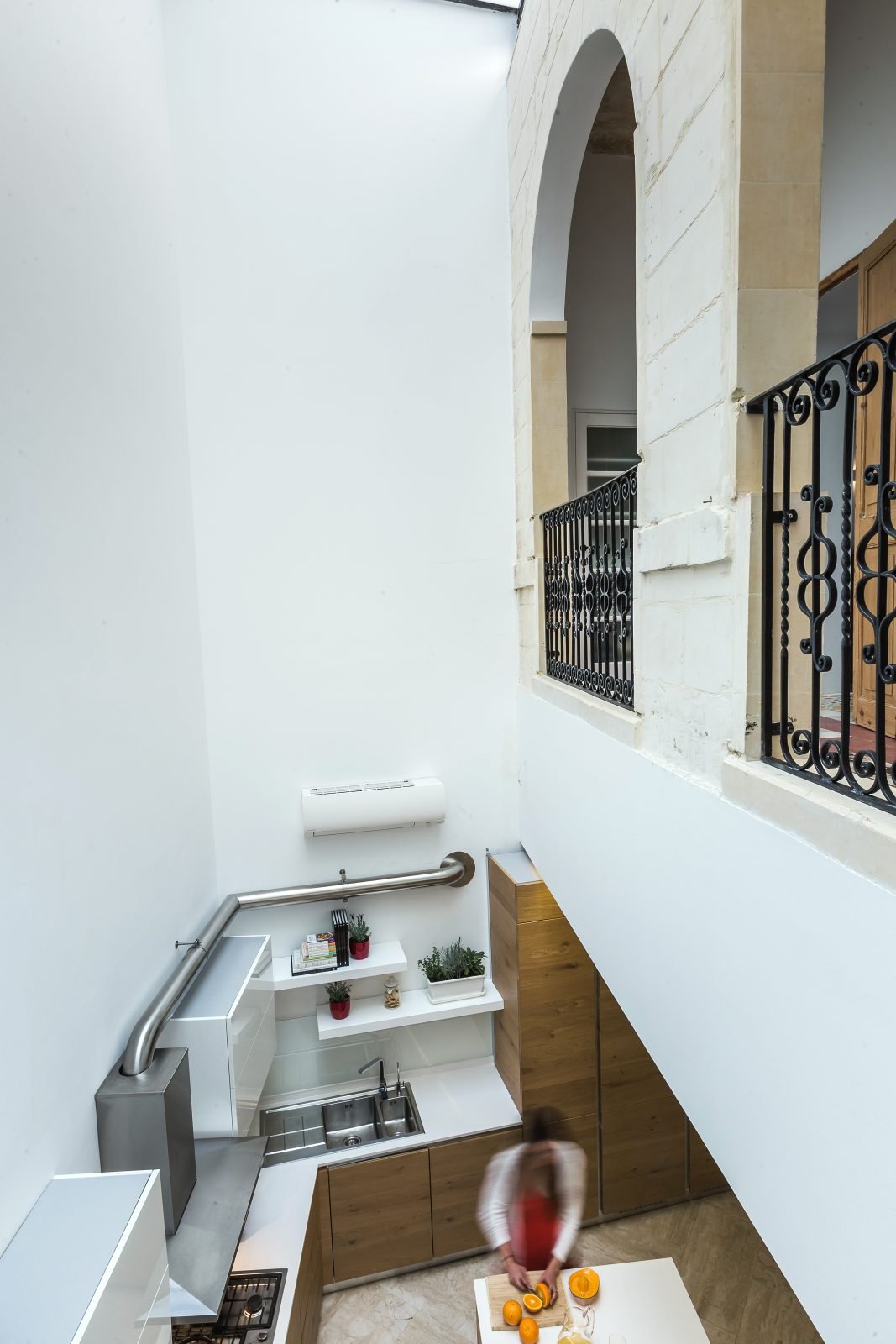 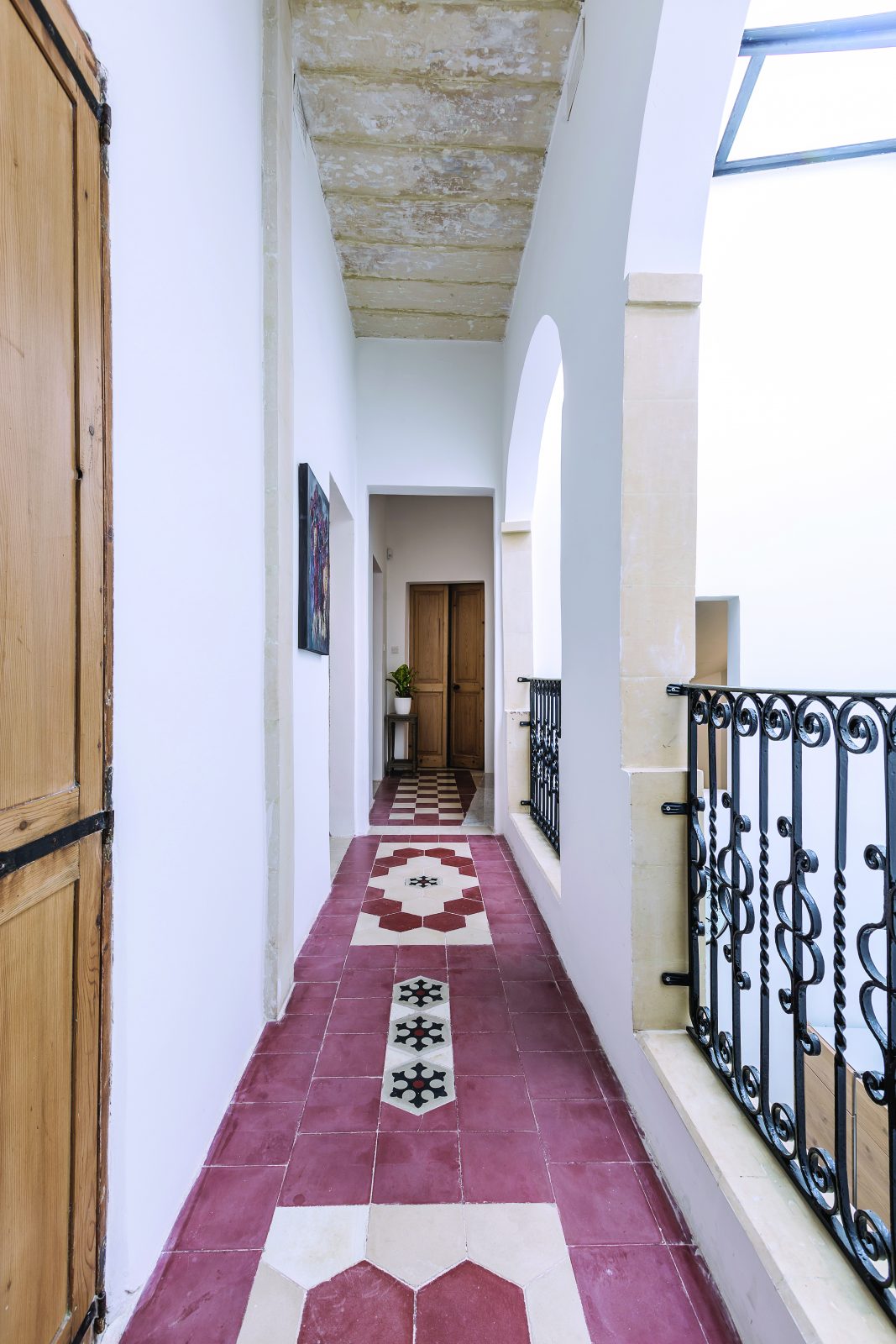 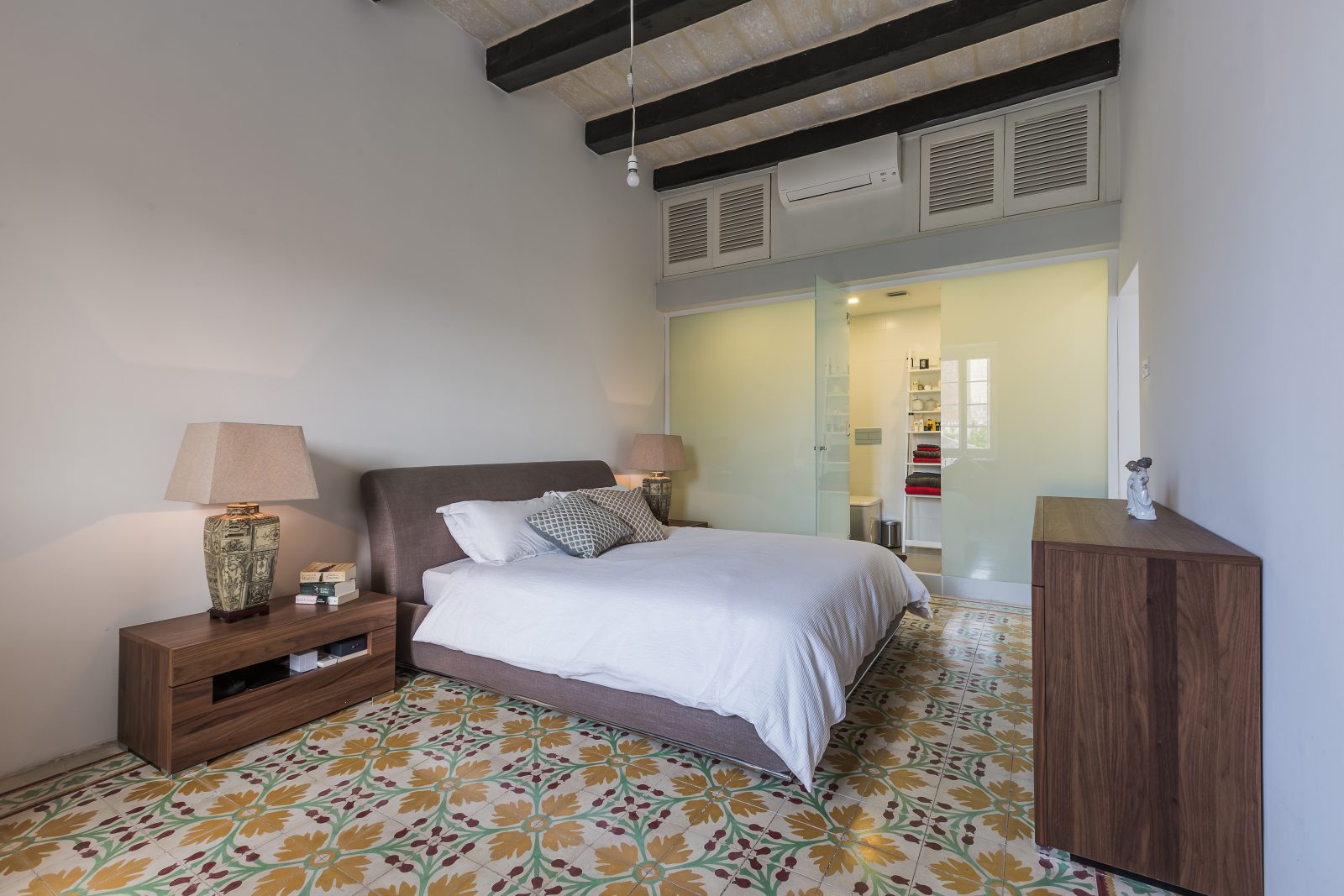 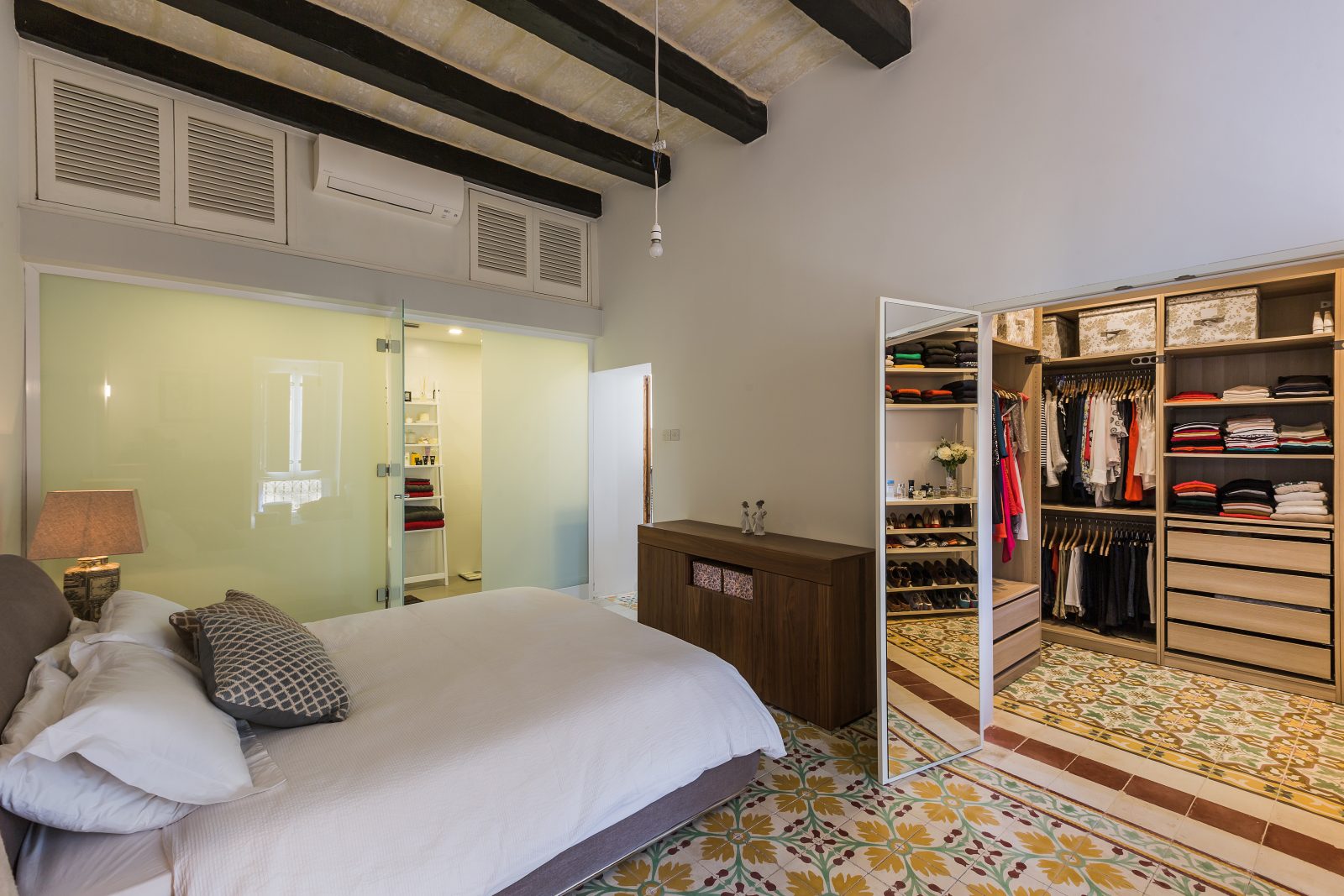 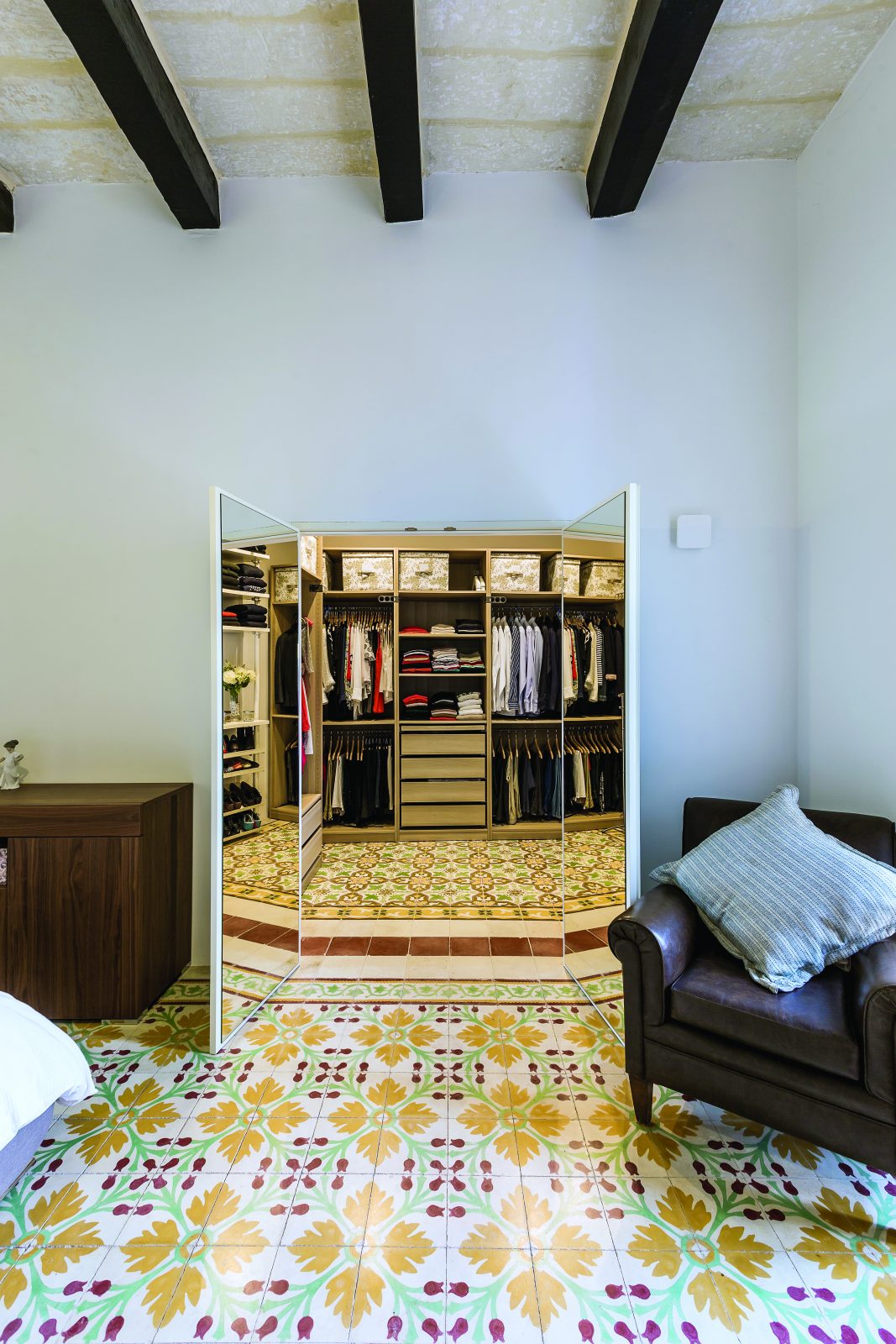 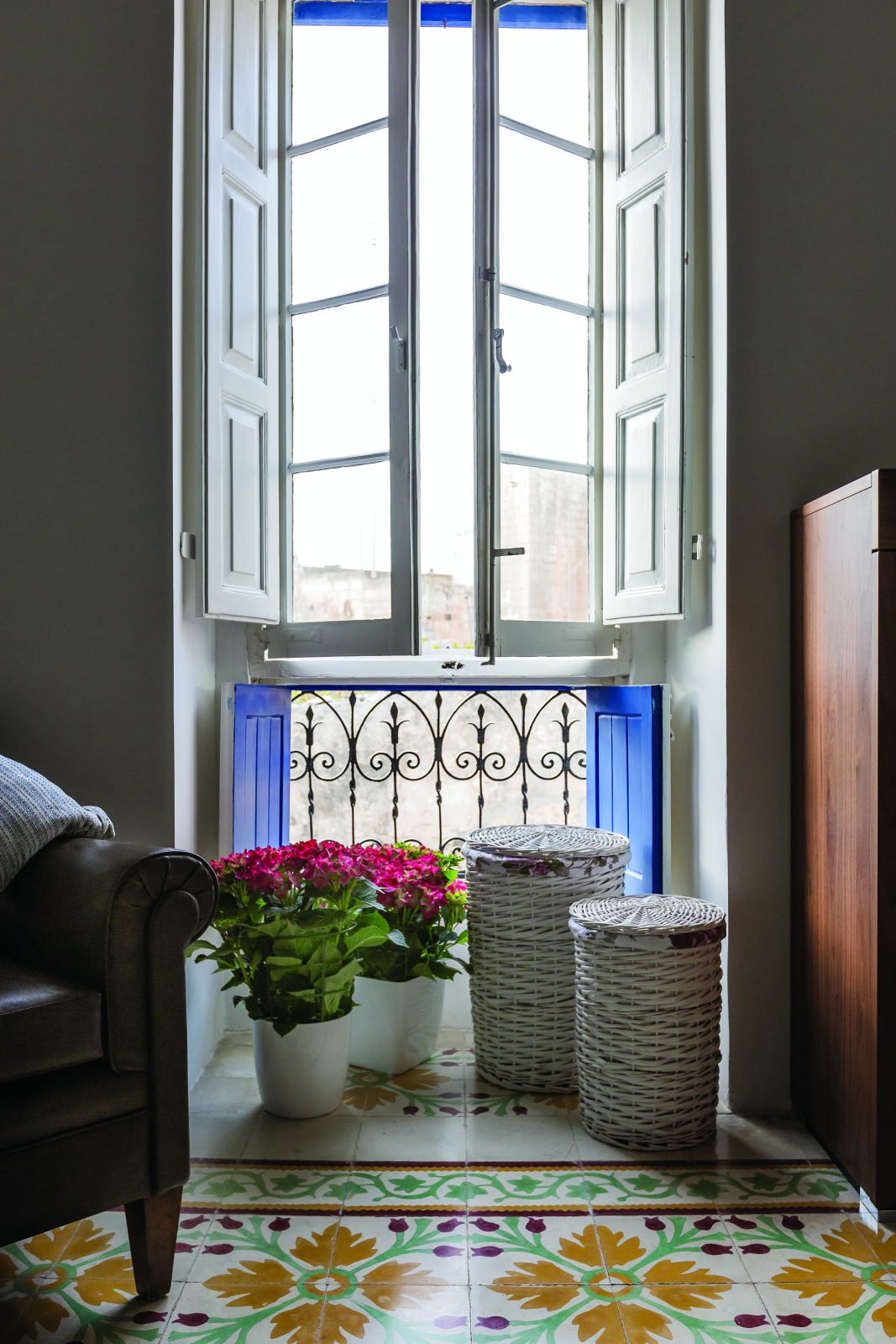