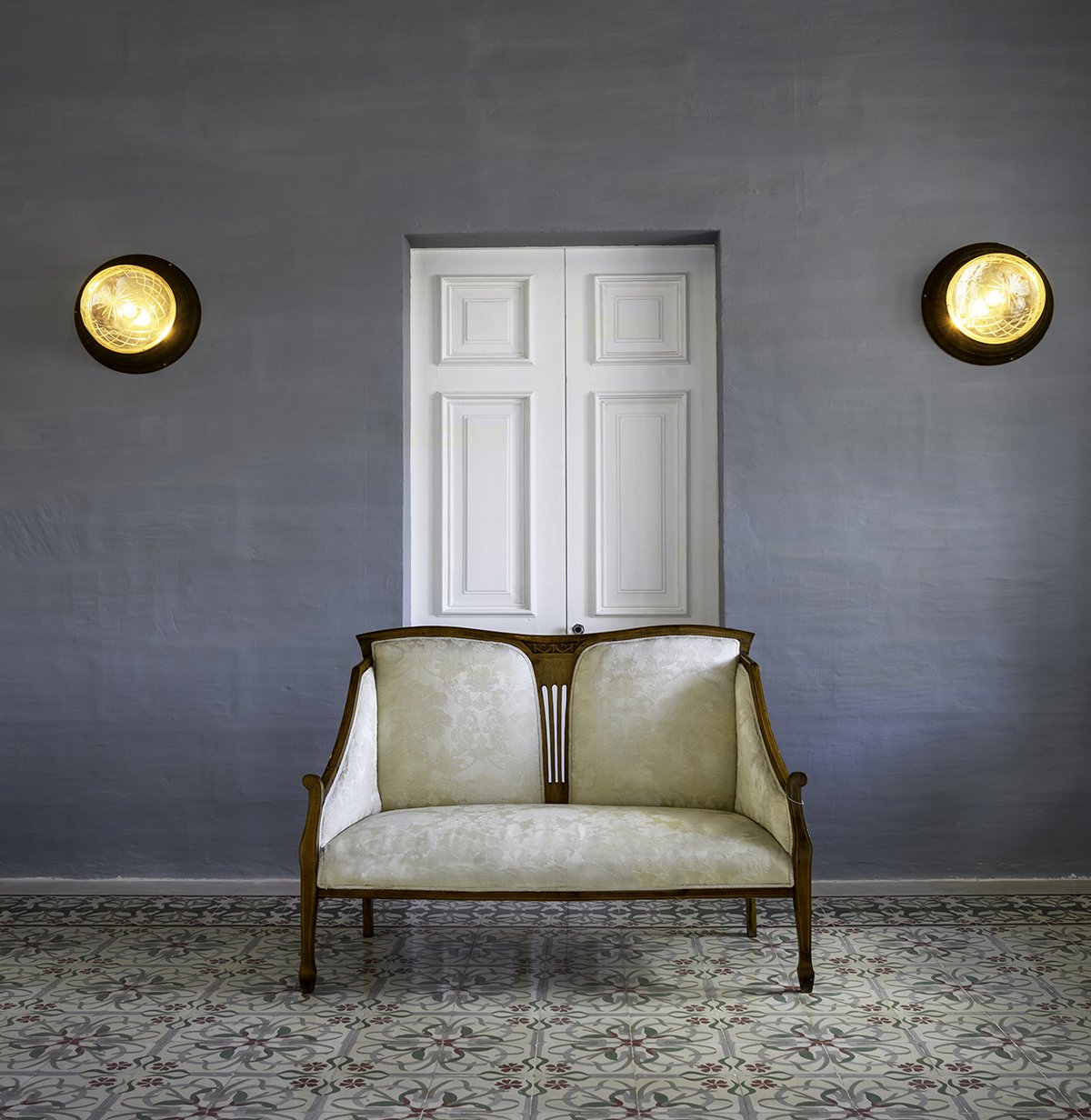 Zejtun has a distinct atmosphere; the village core retains a mixture of architectural grandeur alongside simpler dwellings, connected by mazes of gardens in the rear; it is an intimate, charmed coexistence, where bicycles are still a form of transport for some, and daily greetings between neighbours are exchanged in the streets and across dividing walls. As is often the case in old villages, it is a guessing game as to what lies behind the front door; but there are always clues as to what kind of world to expect upon observing the execution of the work carried out on the facades and apertures. The exterior walls of this typical Maltese townhouse, located within the urban conservation area, have been freshened up with blocks of white paint applied within the recesses, allowing the blue of the shutters and doors to pop – discreet, yet confident. A peek through the glass panels of the antiporta reveals a blast of light entering the hallway from a room to the right, and soon after the sound of people gathered round a table can be heard.
The house is home to a professional couple and their young daughter; it is filled with the chatter of family enjoying a leisurely weekend gathering. ‘We love having people over on the weekends for lunch,’ says the homeowner, and it’s clear from the size of the old refectory table in the dining room that it is intended to be enjoyed by many.
The sunlight enters the space from a large glass panel that runs from the floor to two-thirds of the way up the room. An intimate village square sits just behind, where old men are gathered on benches basking in the winter sun; inside, the family are enjoying a spread, perched comfortably on the modern chairs in shades of burgundy, orange and mustard.
Beyond the dining area, two Chesterfields are placed close enough to the glass panel so as to look out onto village life, or perhaps up towards the personal collection of paintings on the wall, many of which are by renowned Maltese artists. The distinctive blue observed on the exterior is repeated along wall panels, with restored frescoes on the beamed ceiling above. There’s a strong sense of the personal in this house, a feeling that every item, every detail, stems directly from the owners’ realm.
The family moved in last April, after three and a half years of work. ‘We first viewed the house in 2014 – my wife wasn’t convinced about getting an old house, but after seeing this place she said to me, “If we don’t buy this, I’ll dream about this house on my deathbed.”’ It took five months for the contract to be signed, and then the work began. Most of it was undertaken by the owners; despite their busy lifestyles, they renovated the house during their free time, even doing the structural work, and the house and garden display a real labour of love. ‘I already had a good idea of the work required and how it needed to be done correctly from other house projects,’ says the homeowner. ‘But apart from this, both my father and my late grandfather were hands-on, and I share their passion for manual work.’
Besides taking on structural works, the most impressive of which has to be the steel and glass mezzanine library situated within the kitchen, this is a home filled with attachments, a repository for an avid collector who enjoyed picking up antiques and lovingly restoring them, convinced that one day he would have the perfect place for them all.
‘I feel like I’m celebrating the original design house or the artisan’s vision and work when I preserve and reuse these objects,’ he says.
And as if that were not enough of the personal stamp, there is also furniture that has been transformed or created, such as the old armoire in the kitchen that has had its doors removed, so as to function as accessible storage or the elegant marble and steel coffee table in the dining room, executed entirely by the homeowner’s hand.
The high-ceilinged kitchen with the ‘see-through’ mezzanine leads onto a cosy television den, en route to the garden; it feels light and airy with a bespoke island that is more than three metres long, made of a seemingly seamless sleek Italian ceramic tile. ‘My wife’s only request in the kitchen was for a spacious workspace,’ he says.
Upstairs, the master bedroom is refreshingly bare – apart from the double bed, all that occupies the space is a decorative sofa, allowing the focal point of the room to be the intricately restored gallarija. The dressing area is hidden behind a partition, which leads onto a capacious bathroom with original Maltese tiles, a dreamy bathtub and walk-in shower.
The garden with pool is a splendid medley of species, companion planting that allows the plants to grow in symbiosis. The initial design was created by Ray Forder Stent, an expatriate, retired garden designer and a friend. Though not large in terms of surface area, it is teeming with colour, layers and texture. ‘The making of the garden was the phase I enjoyed most,’ says the homeowner.
‘We hope to live in this house for the rest of our lives,’ he continues. ‘We feel this house is part of our family. We sit on the rooftop looking out across the garden walls towards the parish church dome; it’s silent, bright and still, the sun almost blinding despite it being winter, and a sense of contentment is conveyed, a connection to place that comes from transforming a house into a dream home by your own hand.

The ceiling is barrel-vaulted; the frescoes were professionally restored and the last major job to be competed before the family moved in.

A large picture window gives a view of the village square. The colour blue is a theme throughout the house.

The steel and marble table was designed and manufactured by the owner. The angel head was recovered from the rubble that was removed when the owners rediscovered the cellar.

Within the kitchen are two ovens and dishwashers which enable the family to entertain with ease. Above is the steel and glass mezzanine library which was designed and built by the owners.

Within the kitchen are two ovens and dishwashers which enable the family to entertain with ease.

The Arne Jacobsen chairs were bought at a carboot sale eight year earlier. ‘I knew they would, one day, ﬁnd their proper place,’ says the homeowner

The steel and glass mezzanine library which was designed and built by the owners.

The house has no large, formal living room. Instead television is watched in this cosy space off the kitchen.

Playful and fun, the height of the room has been used to install a mezzanine reading nook

An enormous room, a panel behind the bed helps manage the proportions. Furniture is minimal; other than the bed, the only other piece is an antique chair framed by two wall lights

Furniture is minimal; other than the bed, the only other piece is an antique chair framed by two wall lights.

A luxuriously large space that combines old and new.

The focal point of the garden is the mature olive tree, under which the Alocasia, Philodendrons, ferns and various climbers thrive in the dappled shade. There’s the ubiquitous orange and lemon tree and ﬁve pencil cypresses, and one garden wall is a bright yellow, providing a tropical touch.

The travertine coping around the pool complements the rubble walls and concrete wall at the back, whilst the pool, which is less than two metres deep, is lain with black, grey and blue tiles, giving it a particular hue, darker and more alluring as a body of water than typical ‘pool blue'. 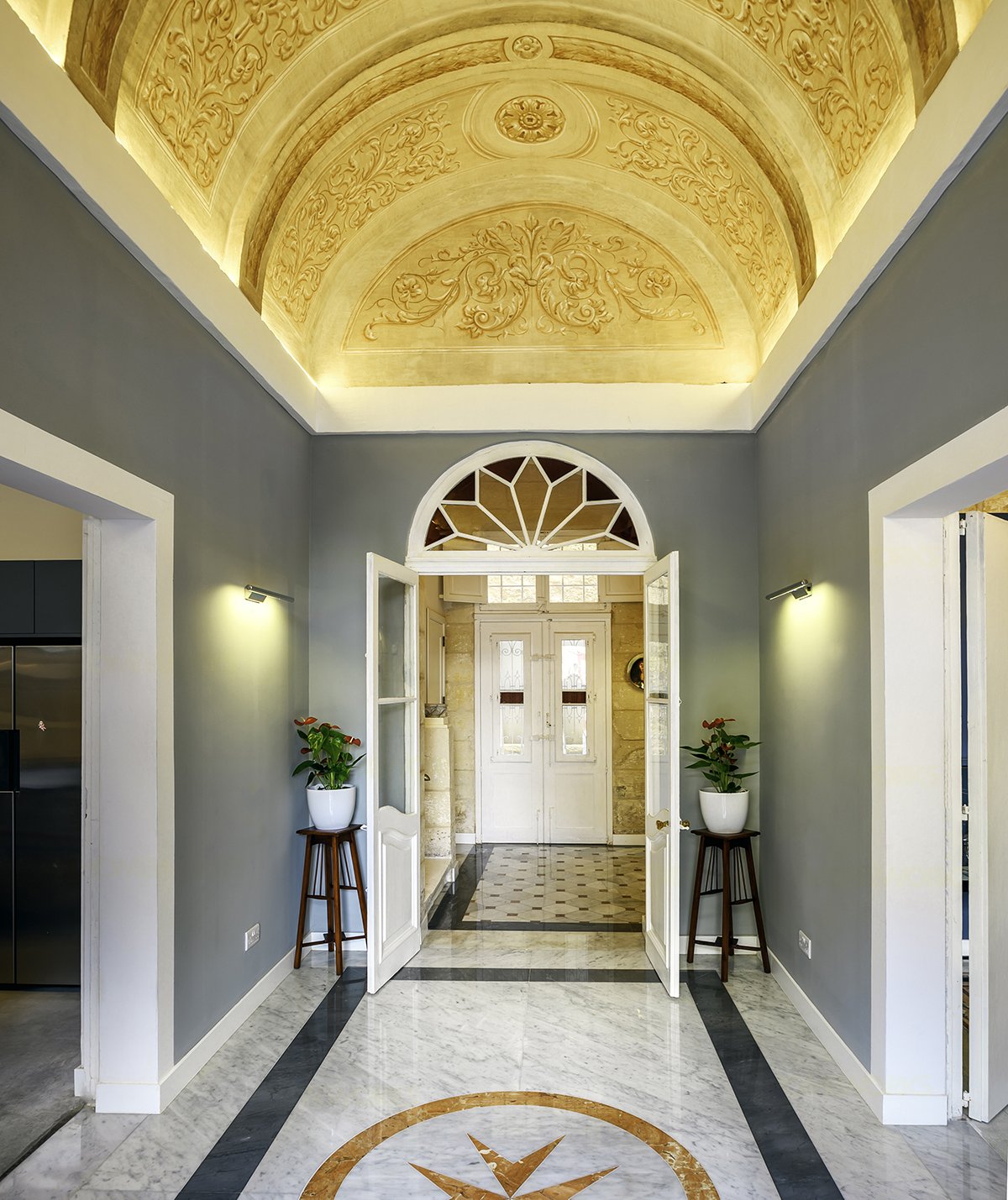 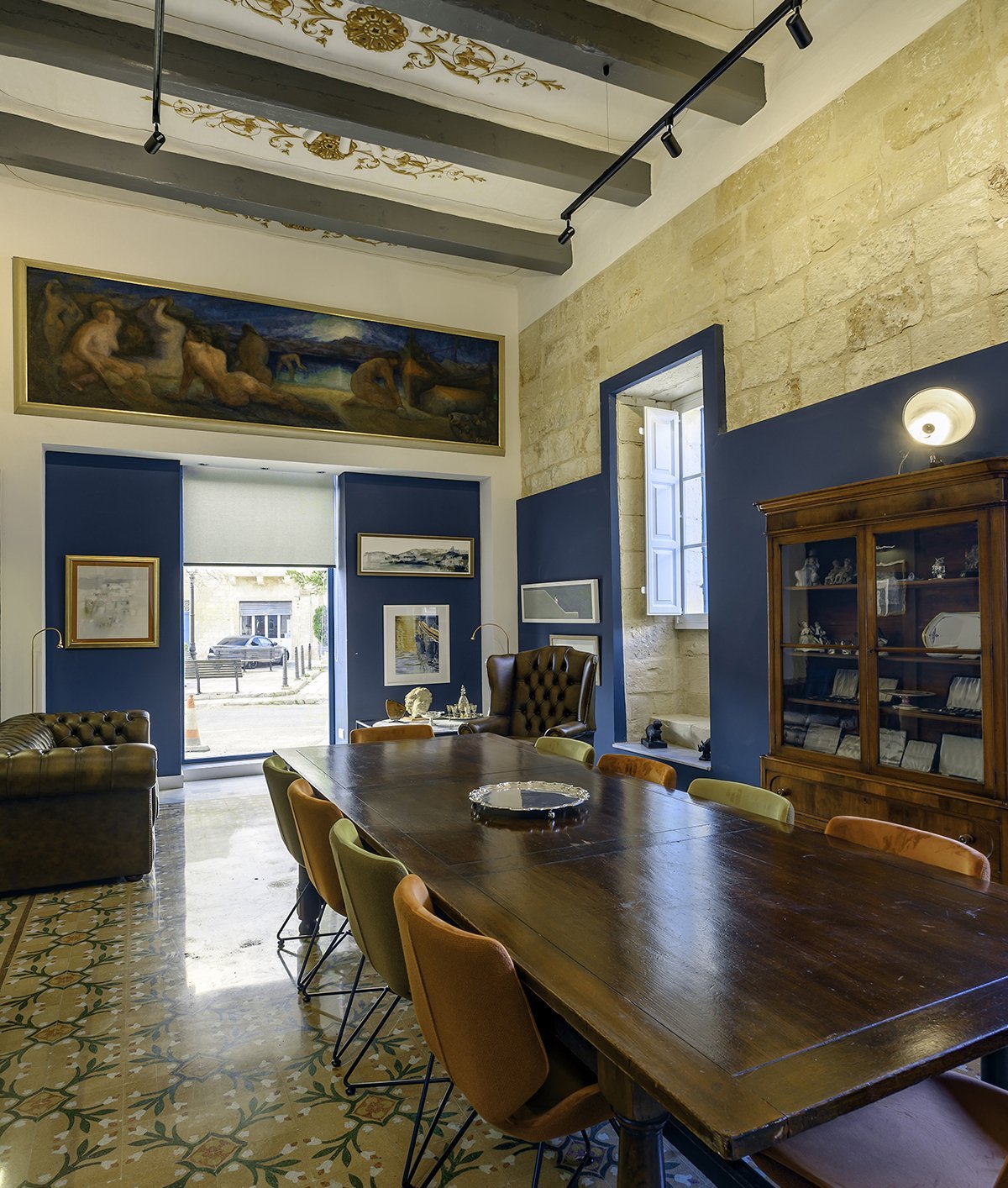 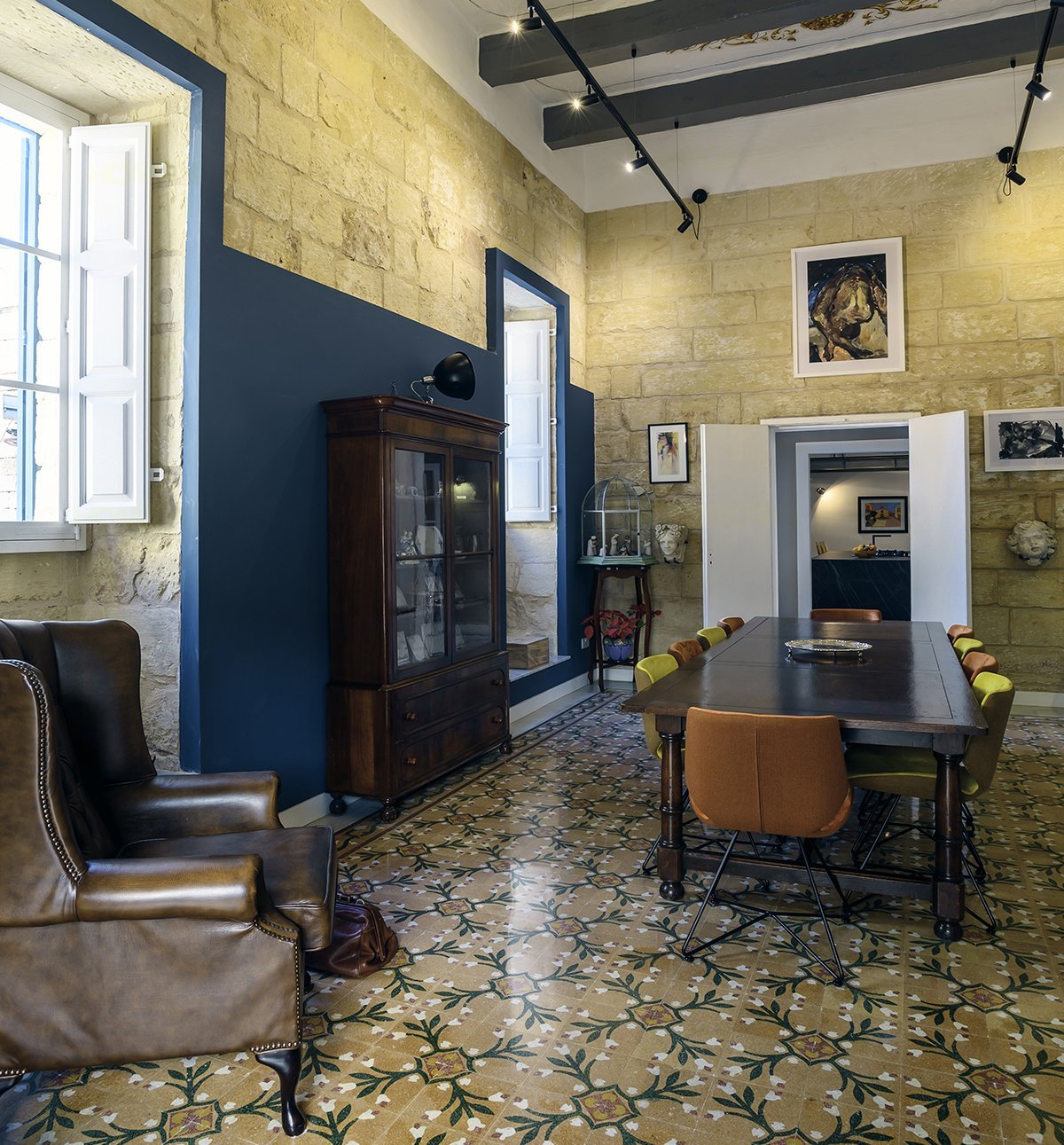 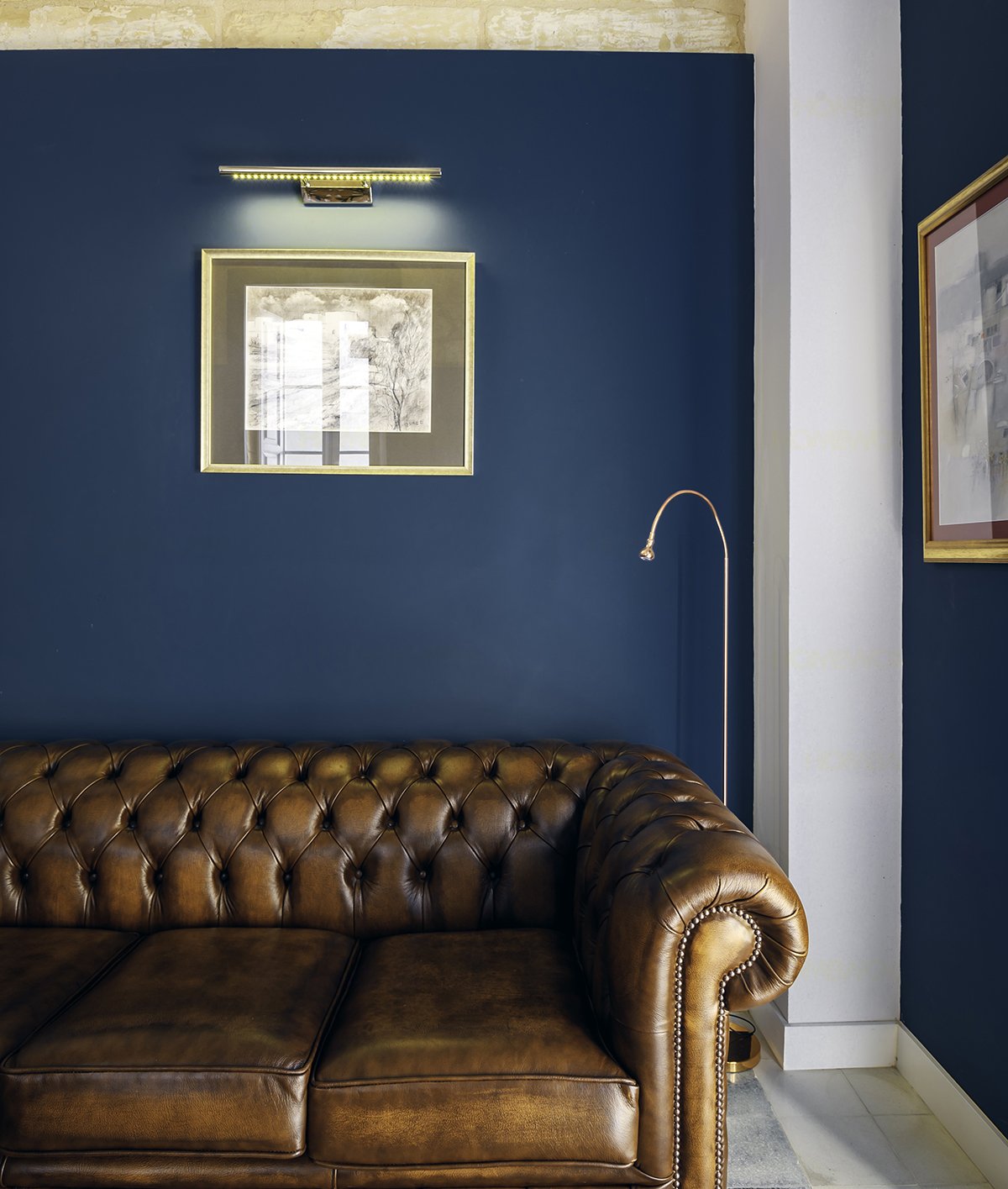 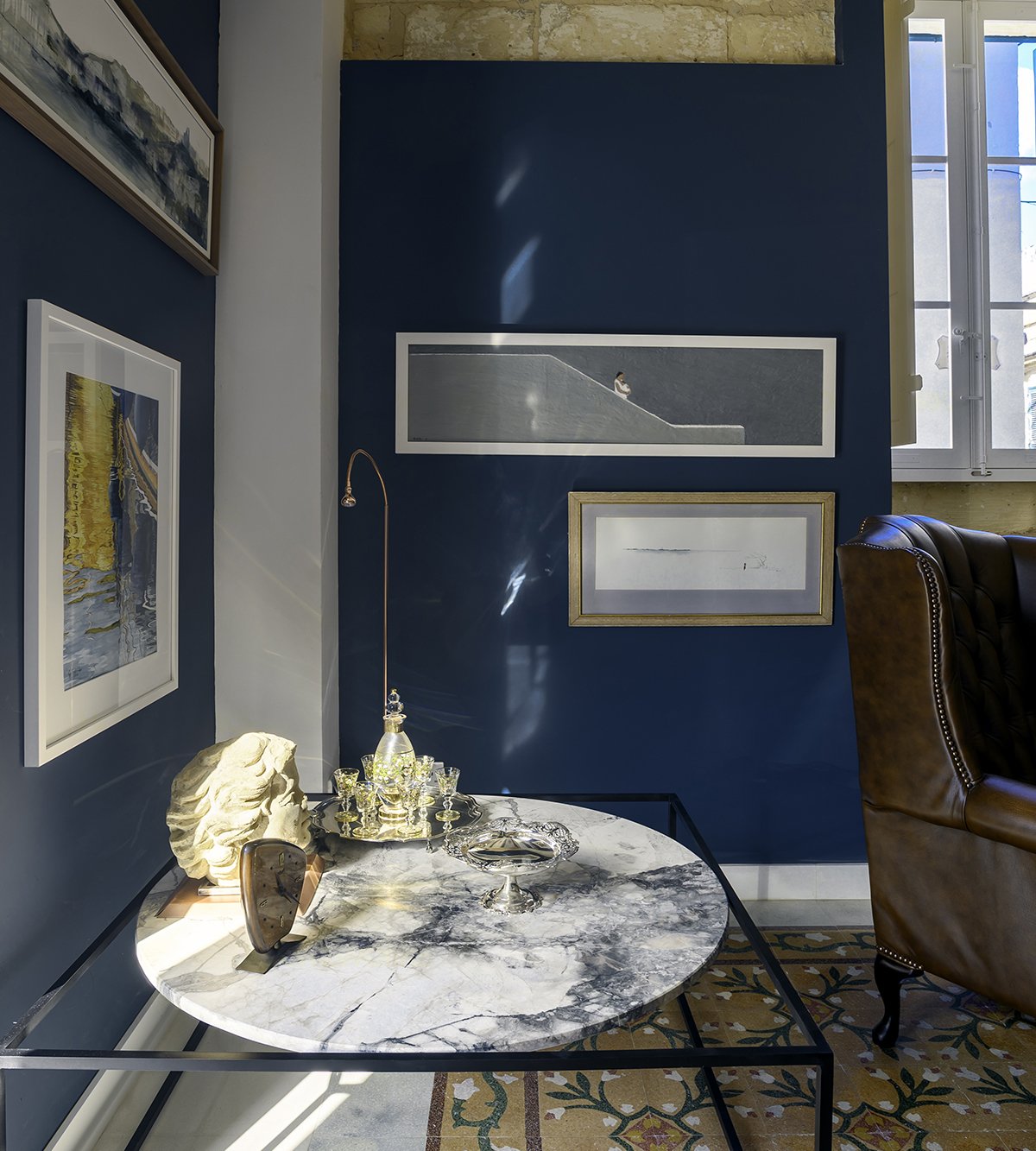 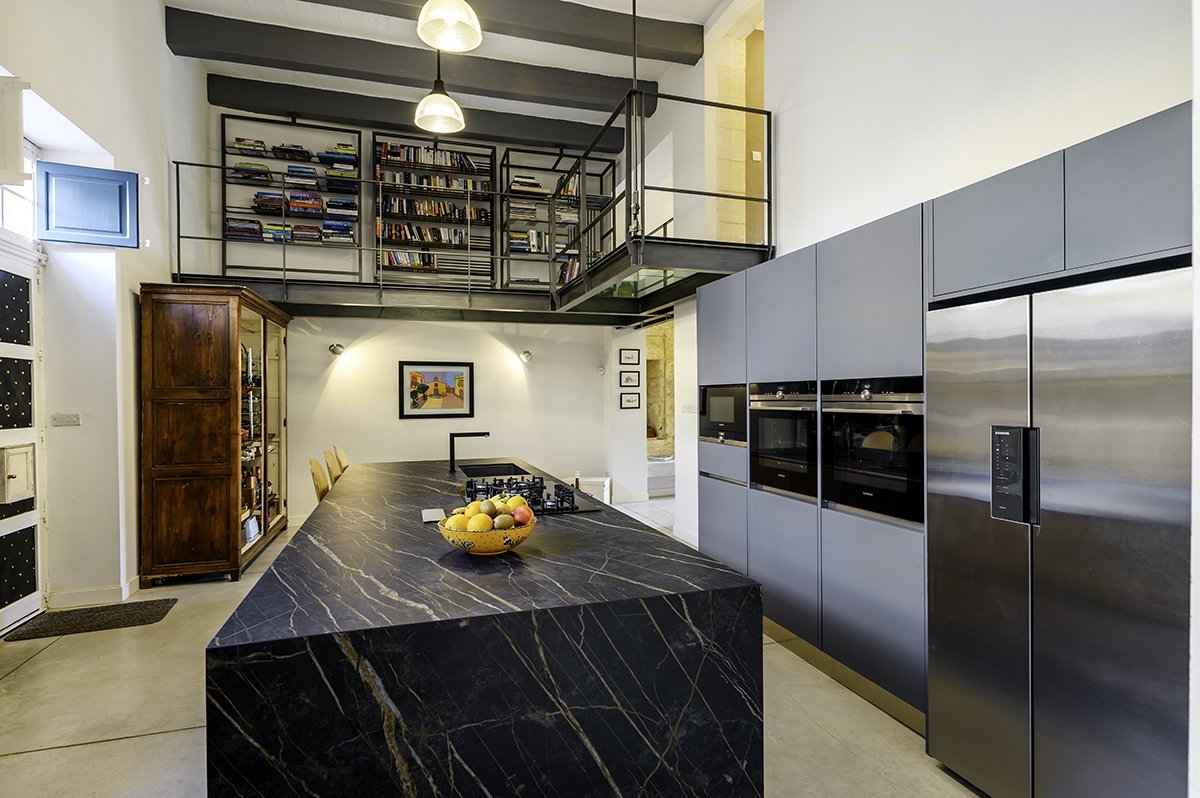 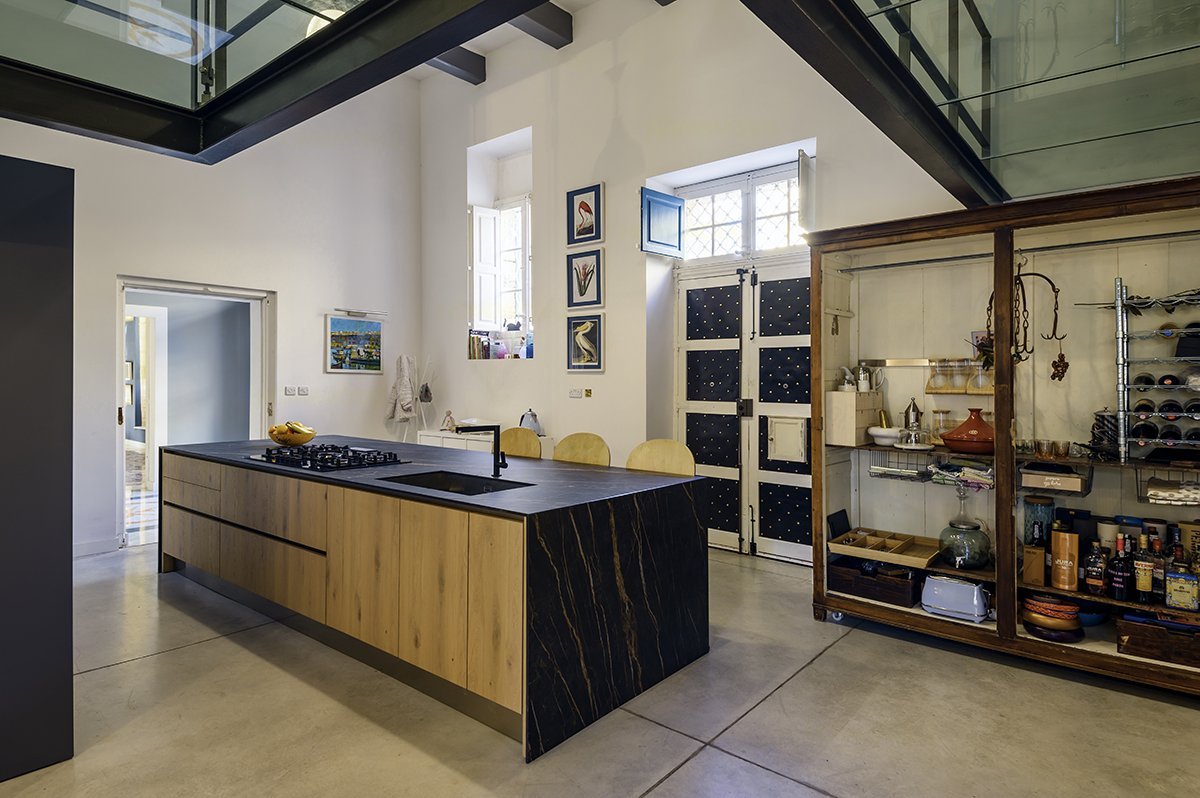 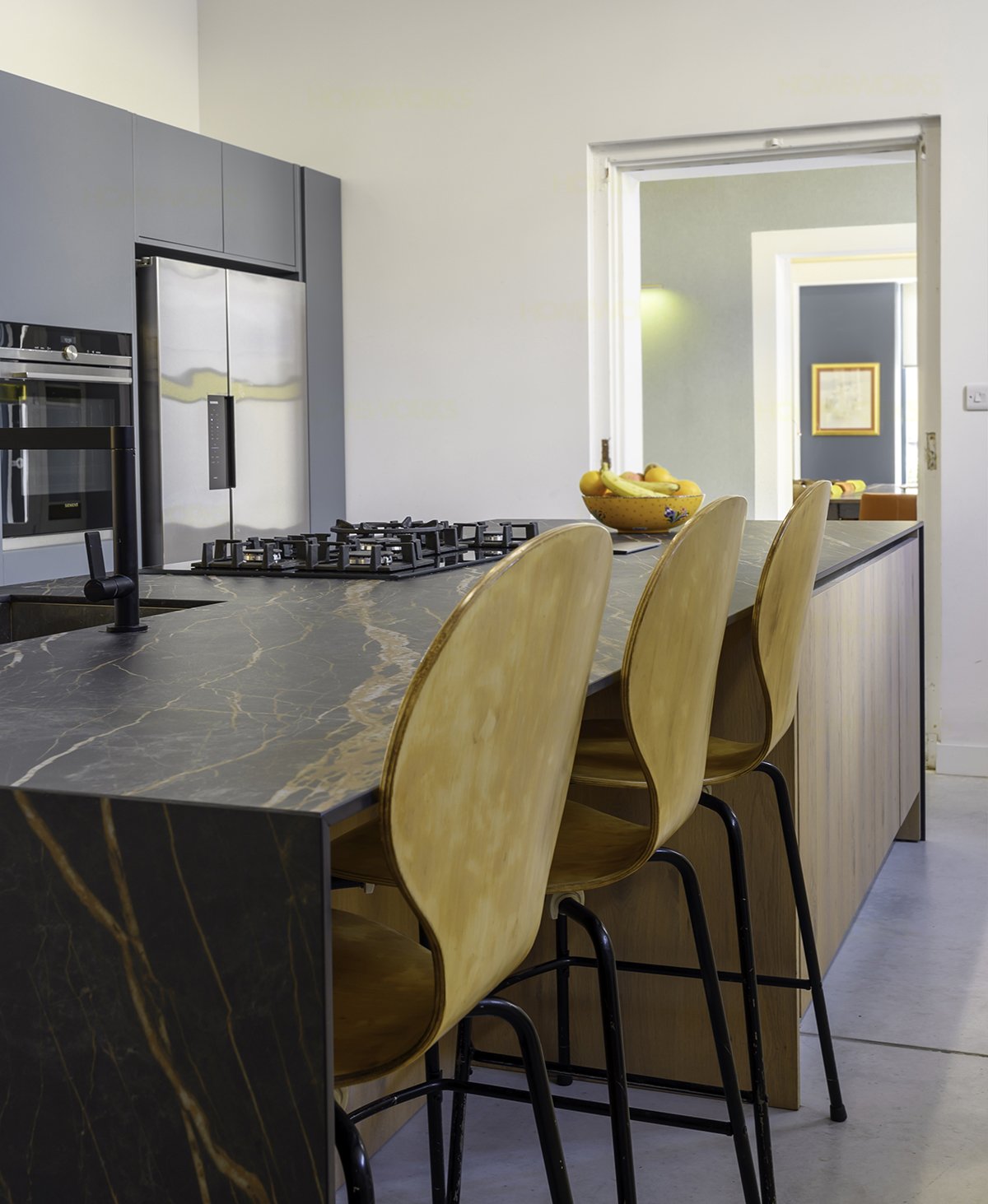 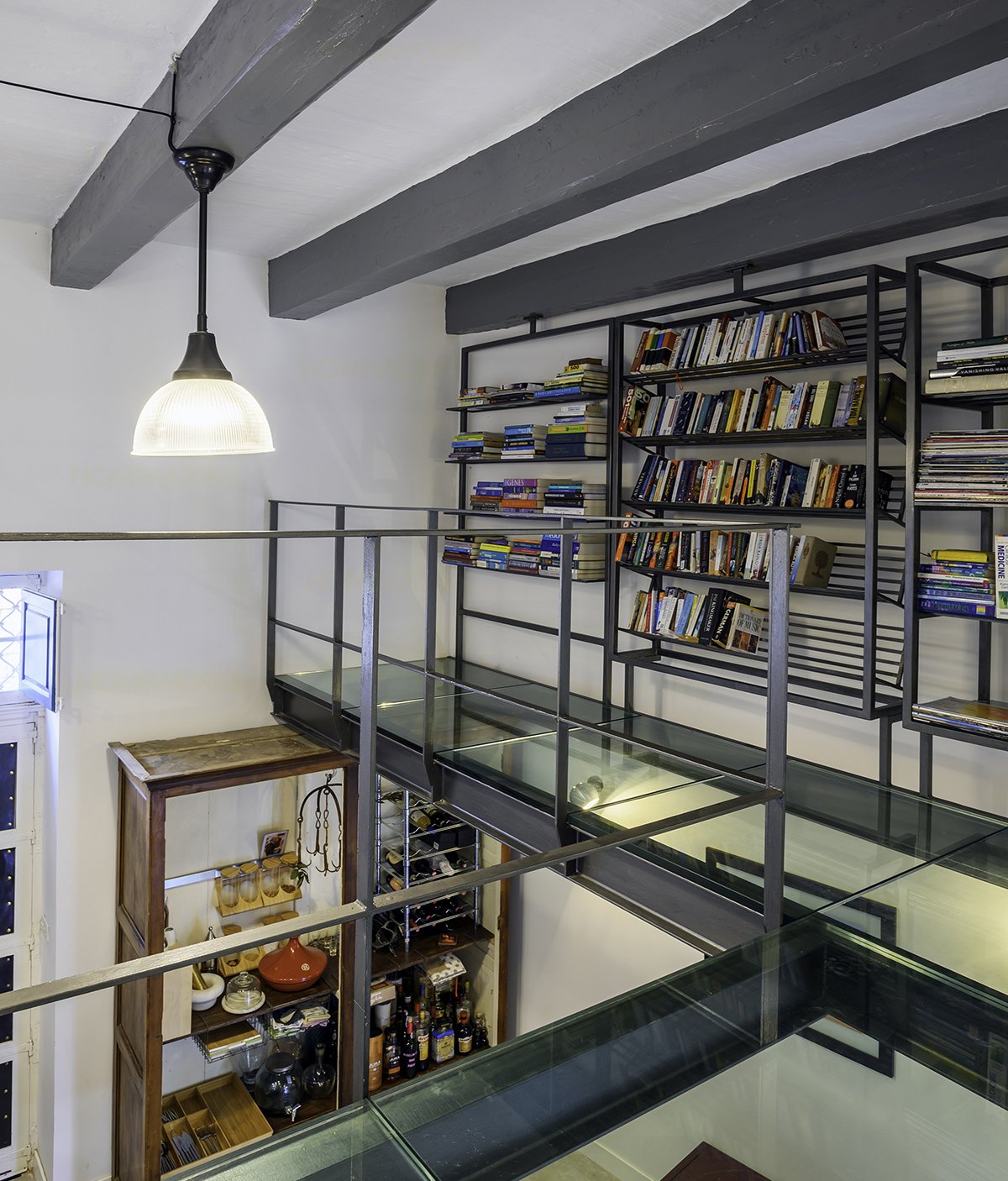 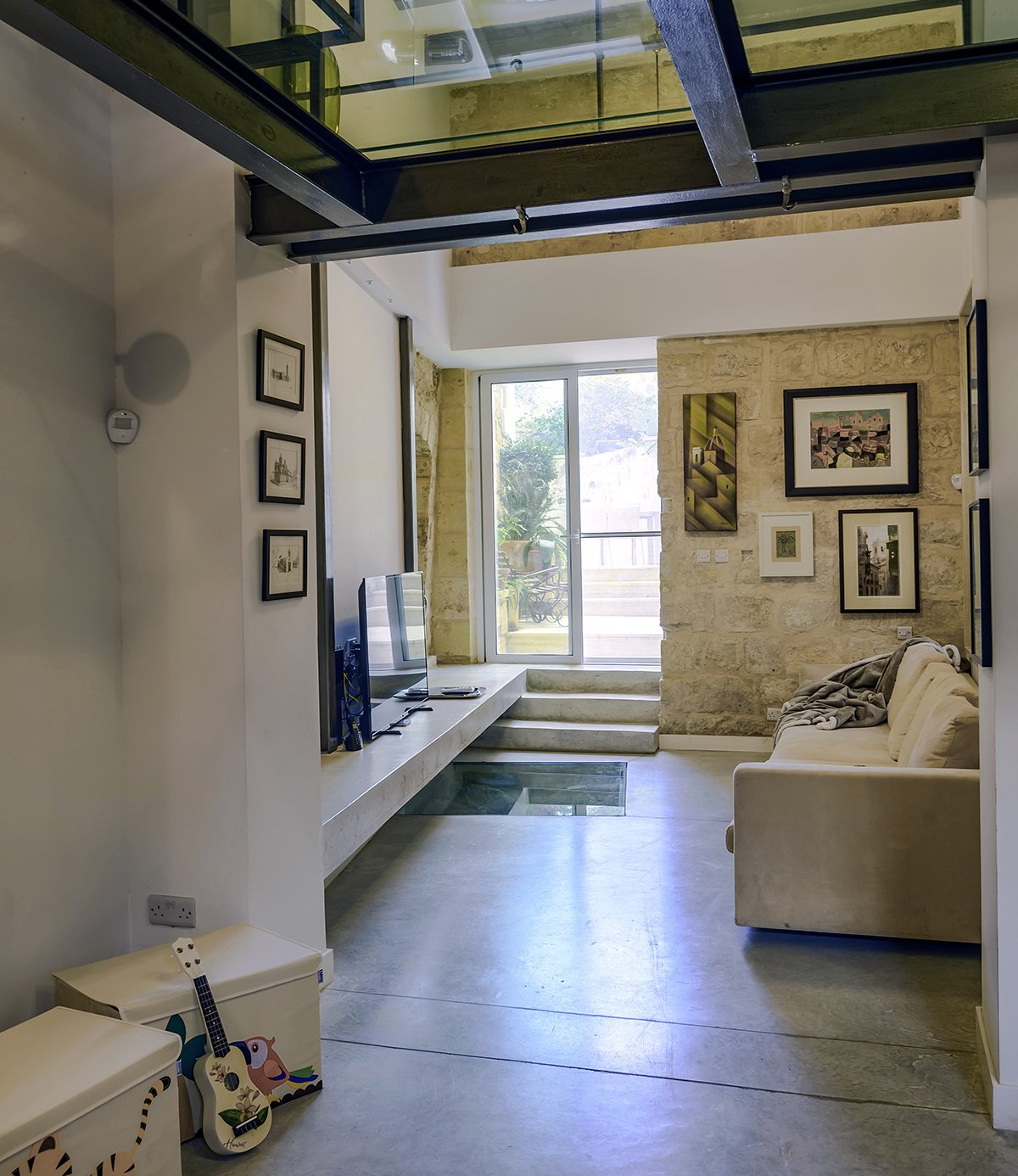 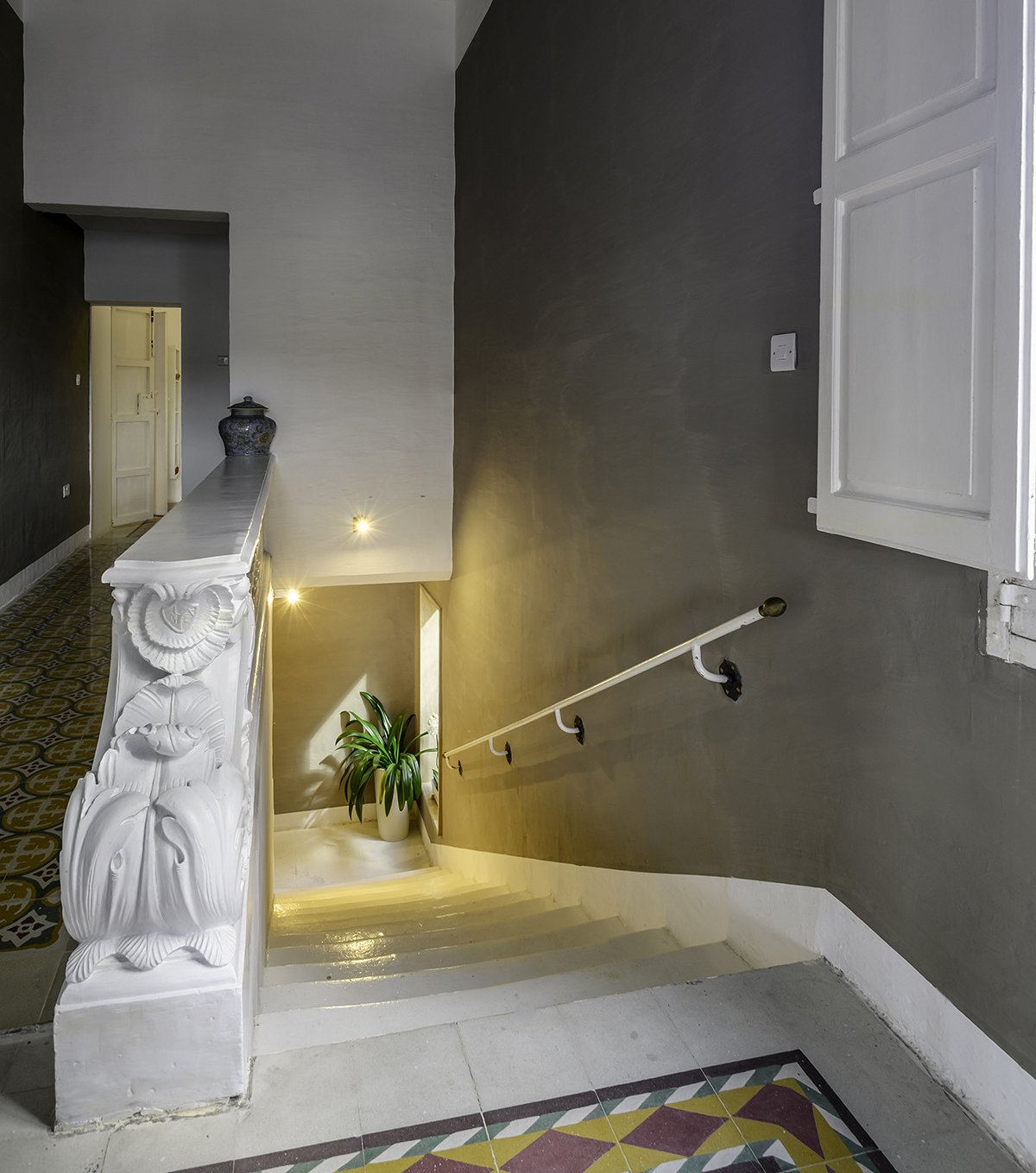 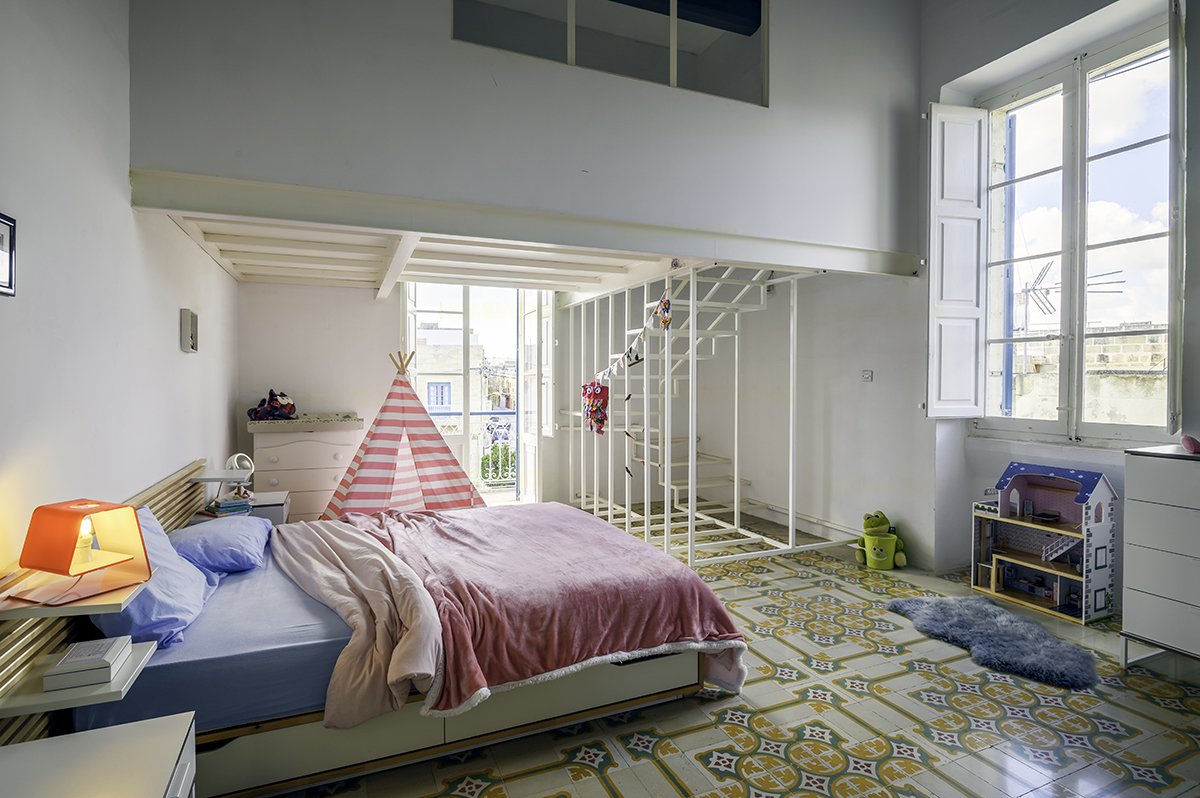 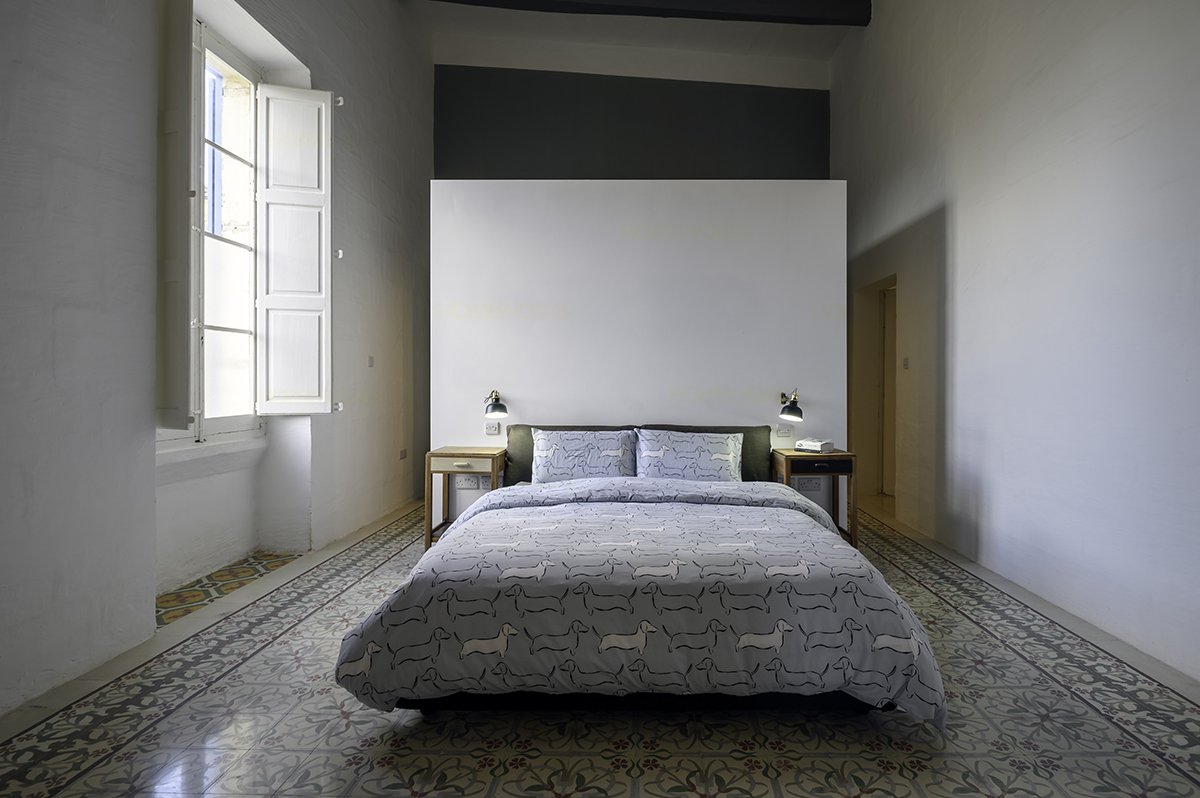 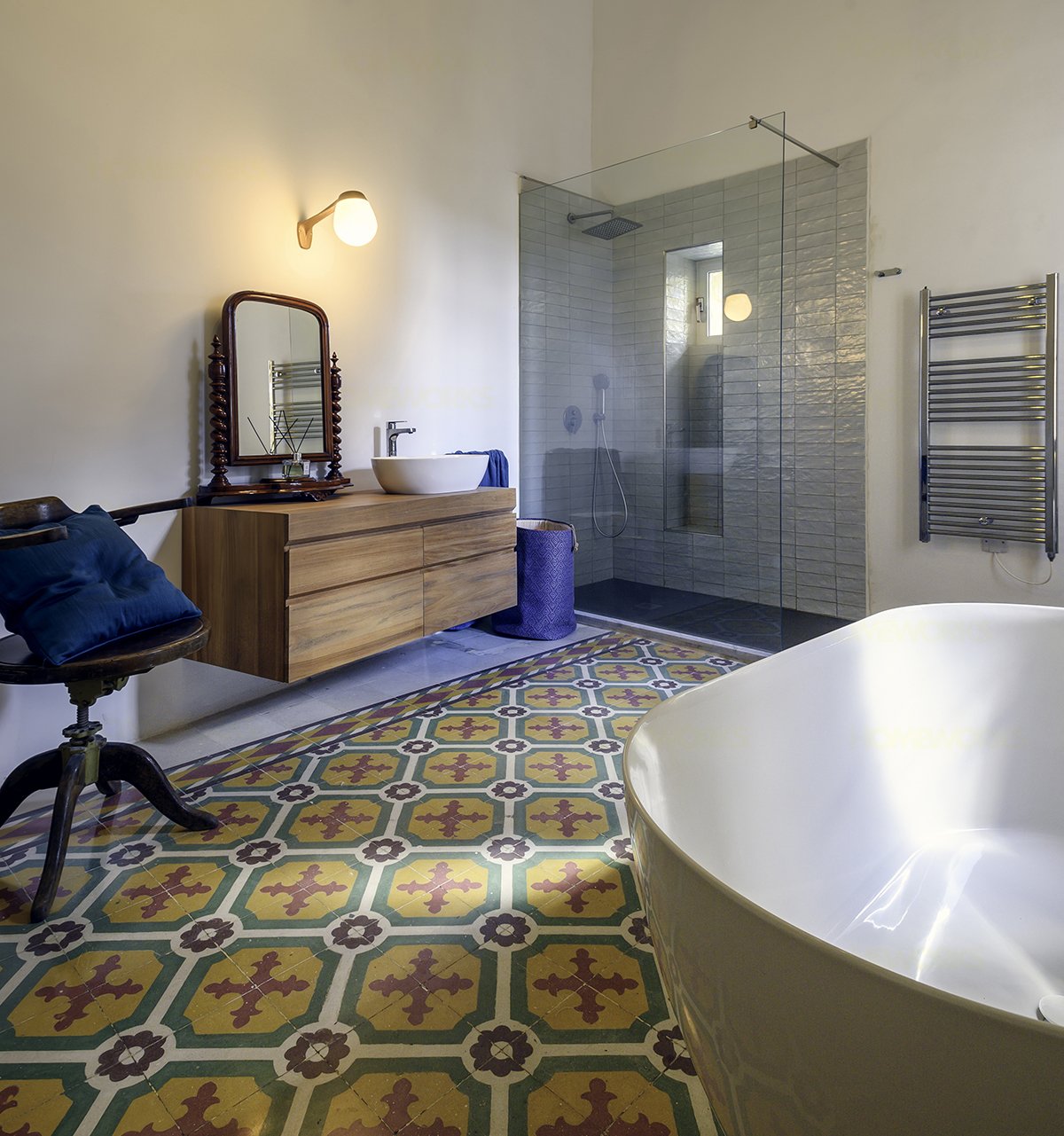 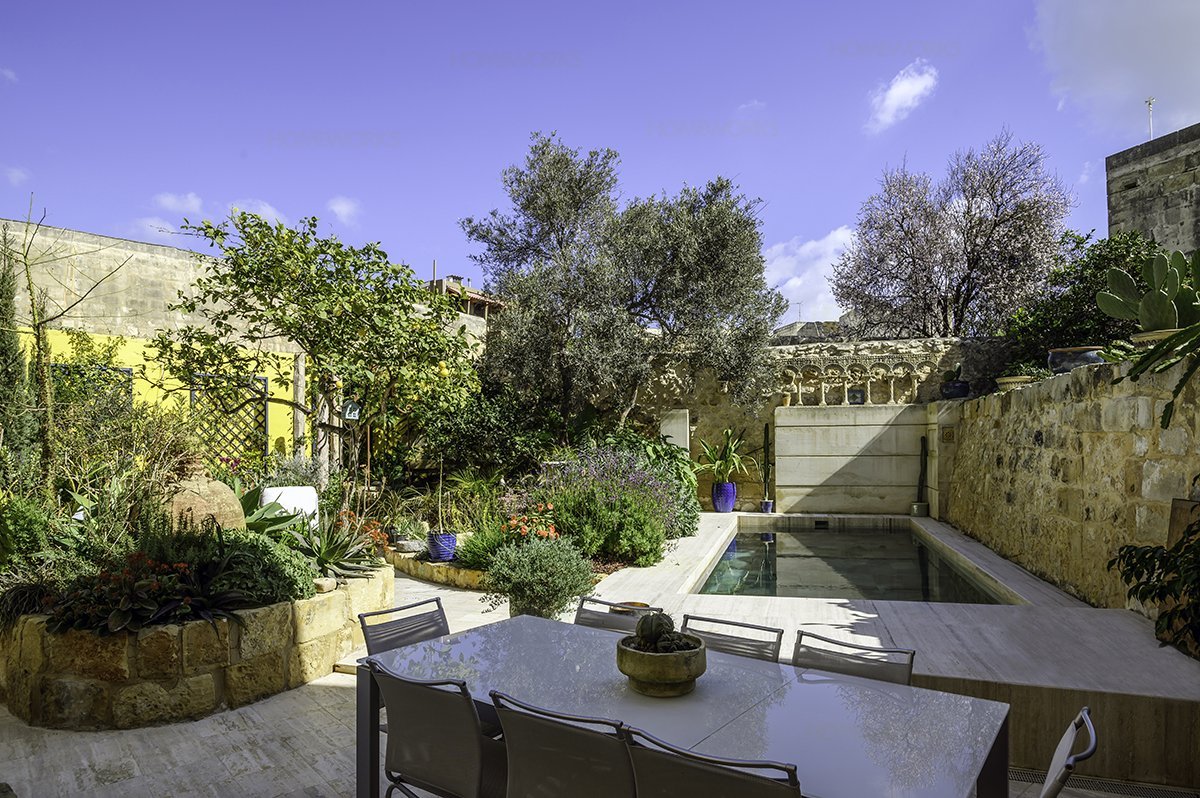 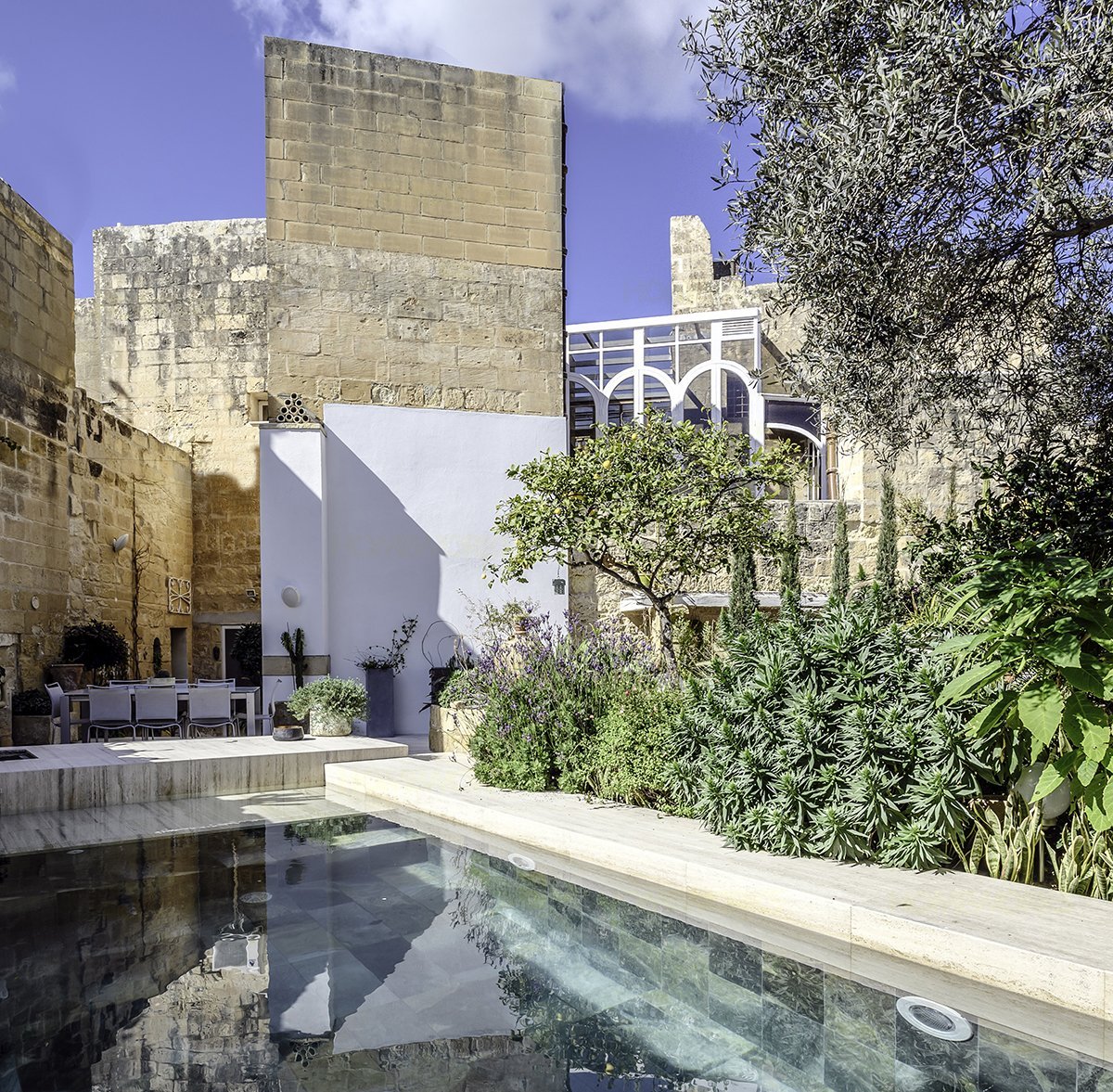 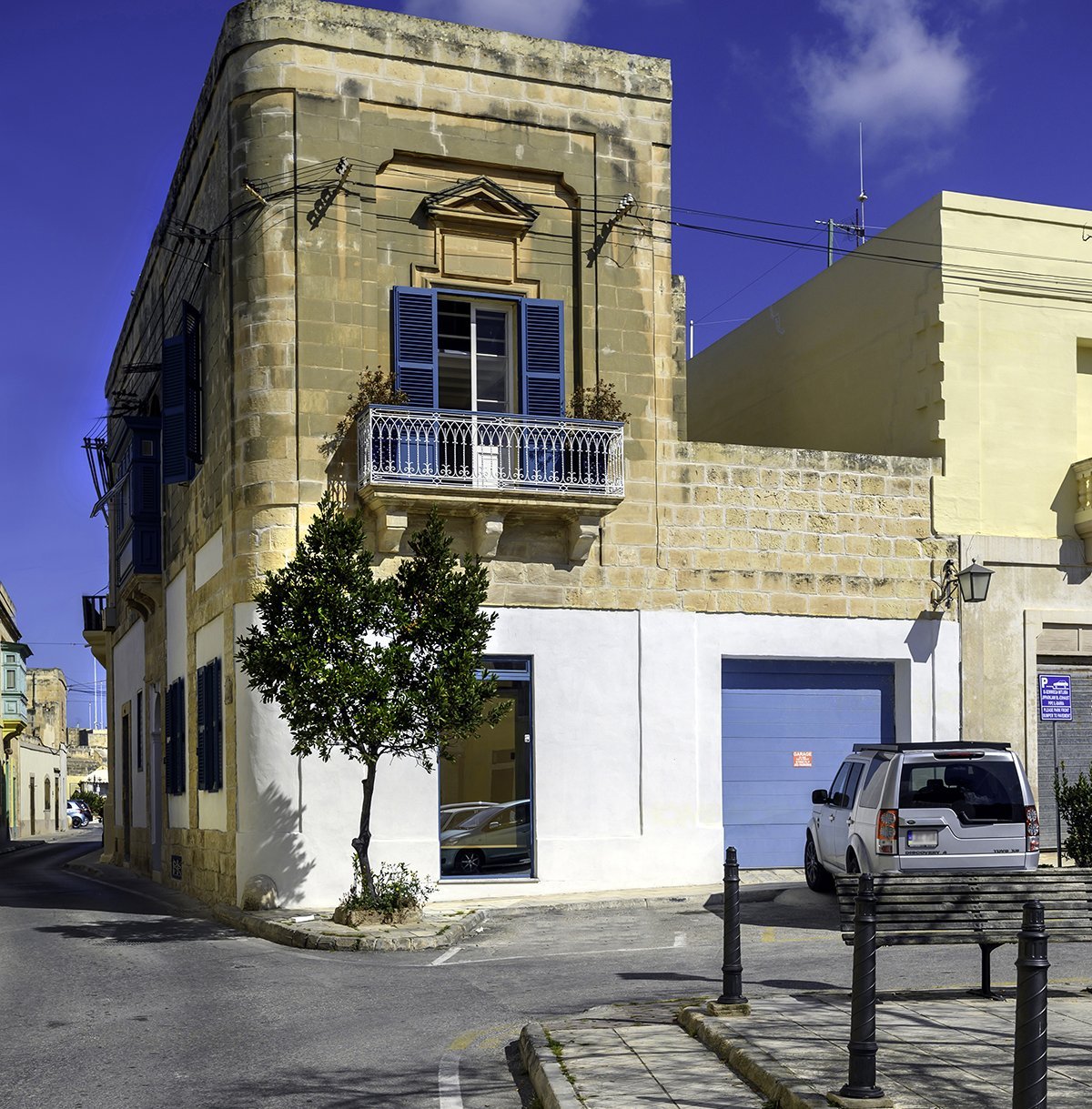