Alberto Lievore reflects on how we can safeguard the environment,

The San Francisco Design Week is the first global virtual

HW Directory
Read back Issues in print
Need inspiration? Browse through our site and create your favourite collections by creating a user account.
My Mood Boards
My Favourite Articles
My Favourite Rooms
My Trade Directory
© WriteOn Ltd 2003 - 2020, All Rights Reserved

A HOUSE OF MANY STORIES 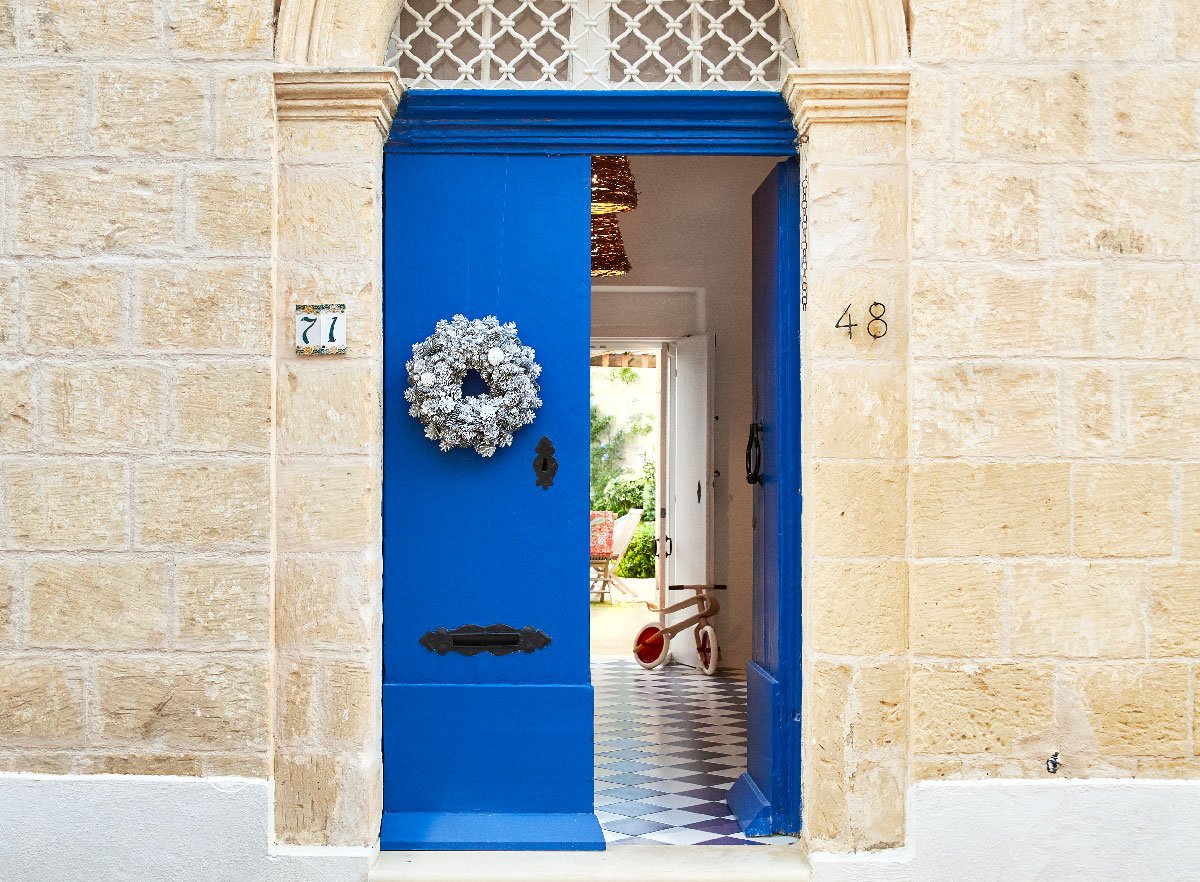 If walls could talk, this house in the village of Safi would have many stories to tell. There would be those that date from 1690, the date carved into one of its walls, perhaps about the Knights of St John and the plague that swept the country but somehow left this village unmarked.
And then there are the more recent ones, created by Yael Shohat’s mother, Claire, Countess Henckel von
Donnersmarck, who bought this house in 1975 while working in Malta. Claire fell in love with the country and decided to buy a getaway house here. In this house, she entertained extensively; the former Prime Minister Dom Mintoff and his wife were frequent guests at her many parties. ‘My mother had a very busy life abroad living in Berlin, Washington, Bonn and Australia, so this was her bolt hole away from that life’, says Yael who lives in Sydney.
Yael spent many summer holidays in the Safi house as a child, and inherited it on her mother’s death. ‘I am sure there is a lot of love, passion, history and stories in this old house,’ she says. ‘By the time it was mine, though, it had a decaying grandeur.’
She wasn’t too sure what to do with it to begin with, however a solution was reached over a drink with an old friend who often spent time in Europe. ‘He visited the house and loved it, and so suggested that I renovate it and then decide, so with his help that’s what I did,’ she says.
It’s no surprise that Yael’s friend fell for the house. It has a wonderfully welcoming feel, a wow factor that’s not about being plush but about how good it feels to be in it. ‘The house seems to hug and hold you,’ says Yael. ‘It makes you feel safe and nurtured.’
Which is just as well because the renovation of the building was long, hard, and on occasion dangerous – when installing a new bathroom in a room above the entrance hall, the ceiling caved in, almost taking one of the workmen with it. ‘We took the house back to its bare bones in order to give it
another 350 years,’ says Yael.
Explains Edwin Mintoff of Edwin Mintoff Architects who were taken on to modernise the property: ‘Our design centred around respecting the intrinsic historical value of the building, and respecting the Maltese townhouse morphology. We tried to keep the structural alterations to a minimum to respect the original building fabric and our interior design was based on cultivating a Mediterranean feeling of vernacular style.
‘Most of the furniture was custom-made and designed to fit into the spectacular existing building, and in order to provide adequate storage we came up with innovative solutions, for example the staircase was custom made to provide storage’.
As well as rebuilding areas that were unsafe, the property was entirely re-wired and re-plumbed and the ground floor treated for humidity, which was extensive. The wall between the kitchen kitchen and dining room was pulled down to create one spacious room, and above this, the first floor was extended to create another bedroom and bathroom, these accessed via a bespoke, timber staircase. As well windows were added to improve the flow of light.
The heavy work done, the walls were plastered and painted, Yael opting for white instead of the original stone. ‘I wanted clean and clear lines which, are a big and beautiful feature of the house which highlight the vaulted ceiling and arches in addition to the other architectural details’ says Yael.
Similarly, furniture has been kept to a minimum. ‘I want people to discuss the architectural features of the rooms rather than the fabric of the sofa,’ says Yael.
As much as she has invested in the property, though, it is a long way from Malta to Sydney and so Yael has decided to sell the house. It now awaits a new owner to write its next chapter.

Once two rooms, a wall was demolished to create one large light-filled room that on one side opens up onto the courtyard. The wooden table and chairs add warmth to the white. The made to measure kitchen is made using white Fenix. The cabinets with touch handles, made bespoke, create sleek units for a simple, uncluttered style that fits with the mood of the house. Area rug, Design House. Chairs, Butlers. Flowers, Floreal

The date engraved into the wall marking the year of construction

One of five bedrooms, the walls are clean and white with parquet flooring. The colours of the bedlinen pick up the blue of the shutters. Area rug, bedspread, pillows, throw and stool, Design House. Table lamp, Butlers.

Reached by steps from the bedroom, the ensuite bathroom is a beautifully stylish space with patterned tiles and a modern fittings. Linen towels, Loft. Wicker pendant light fitting, Design House

This was redesigned in order to create a more functional space and to allow better views from the dining room/kitchen and living room. Decorated with hanging lights on the arbour, it has a lovely festive feel. Tableware and hanging ornaments, Butlers. Throw and green metal chair, Design House. Mini Christmas tree (real), Floreal. Blue glazed pot, Sherries

The navy and white tiles create a stylish entrance to the house and bring out the Mediterranean character of the building. Door wreath Butlers, children’s bike, Eclecticist. 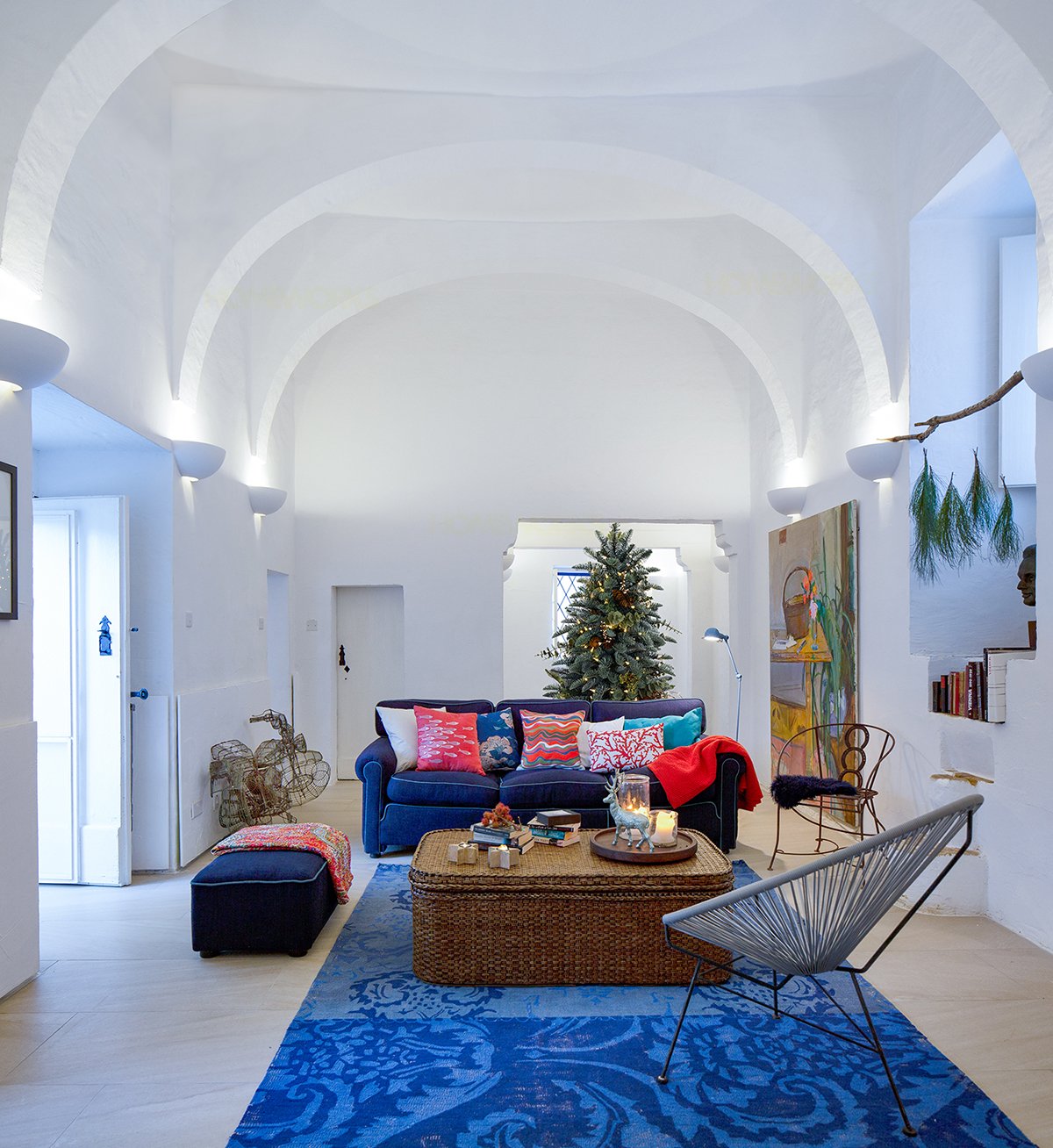 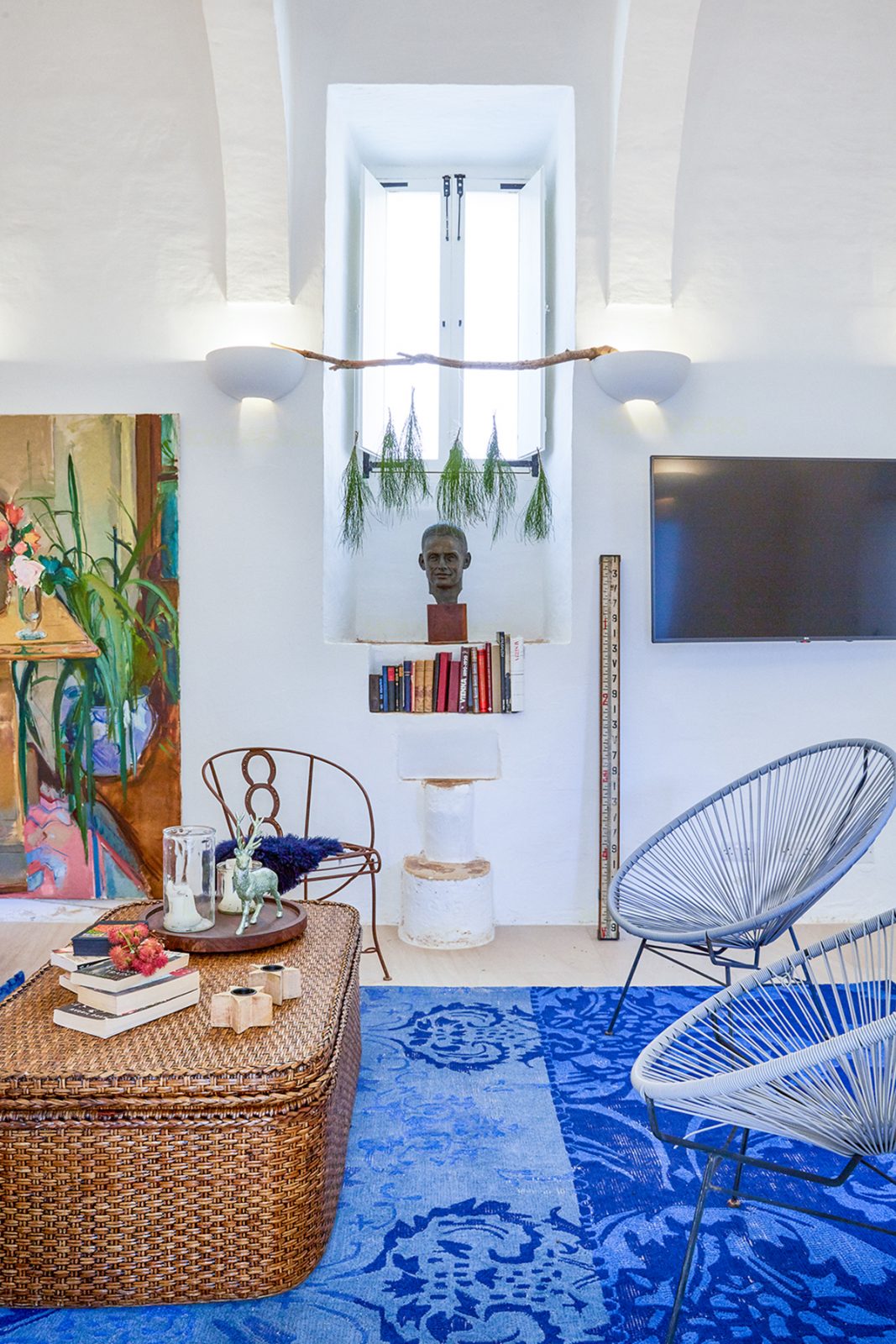 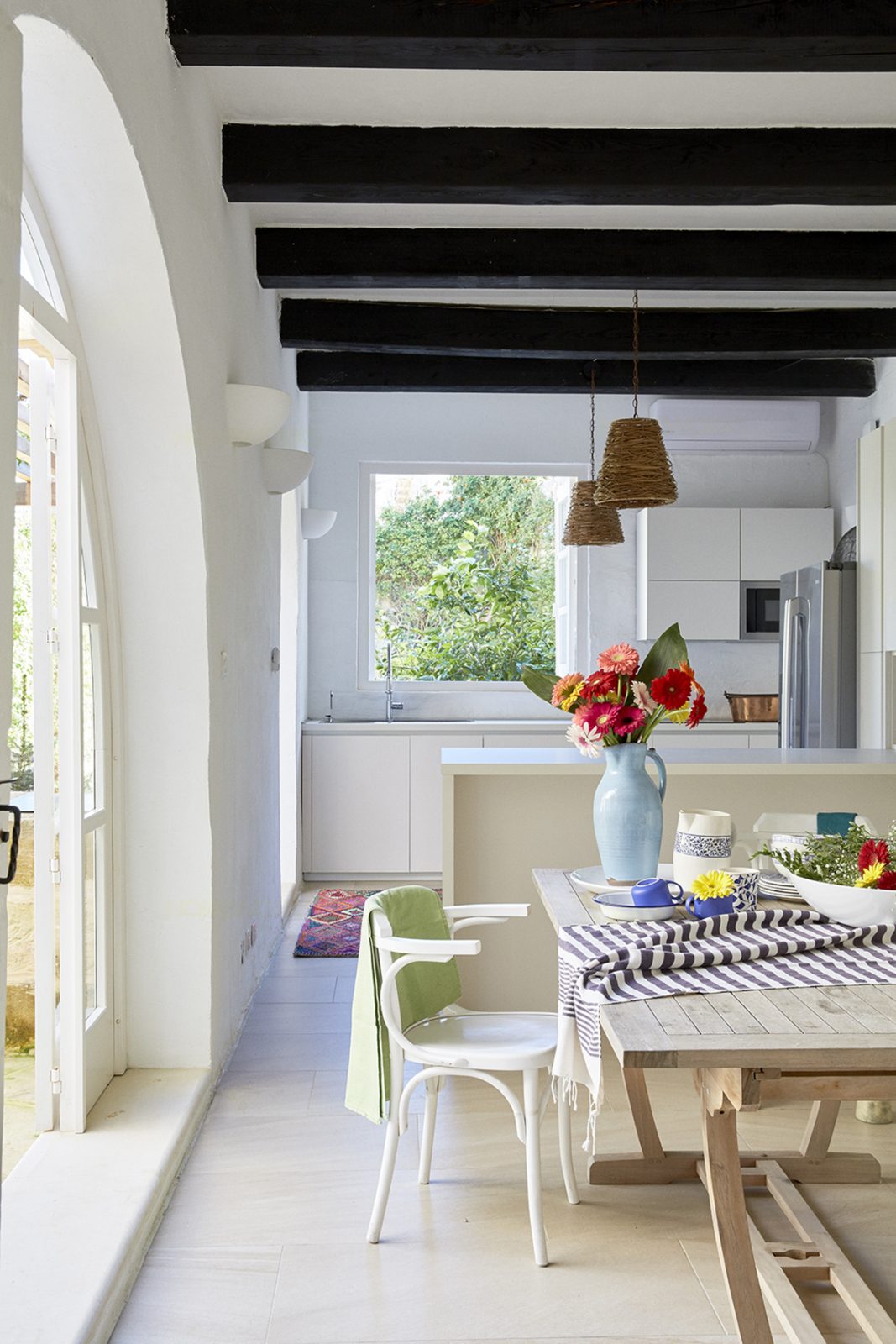 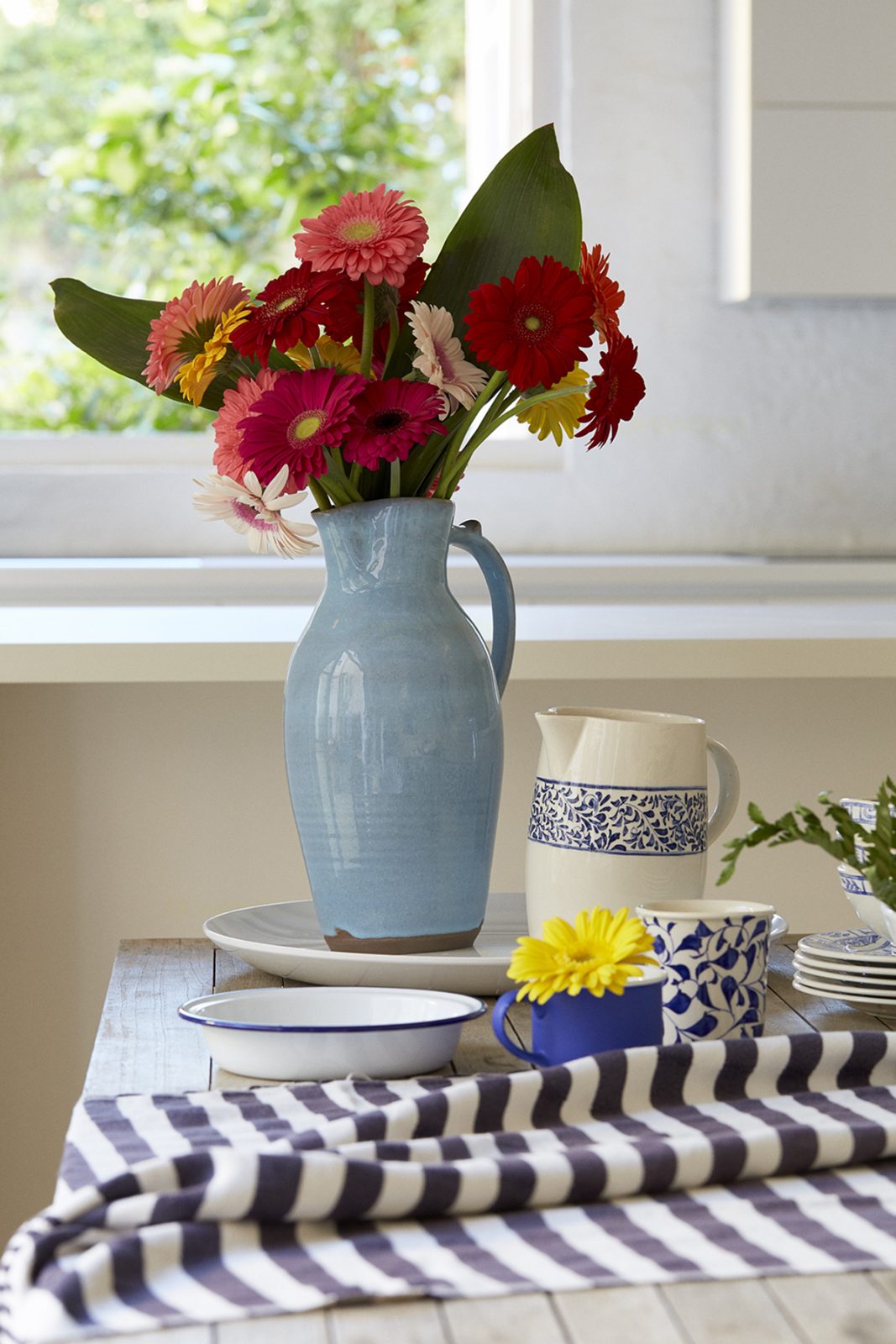 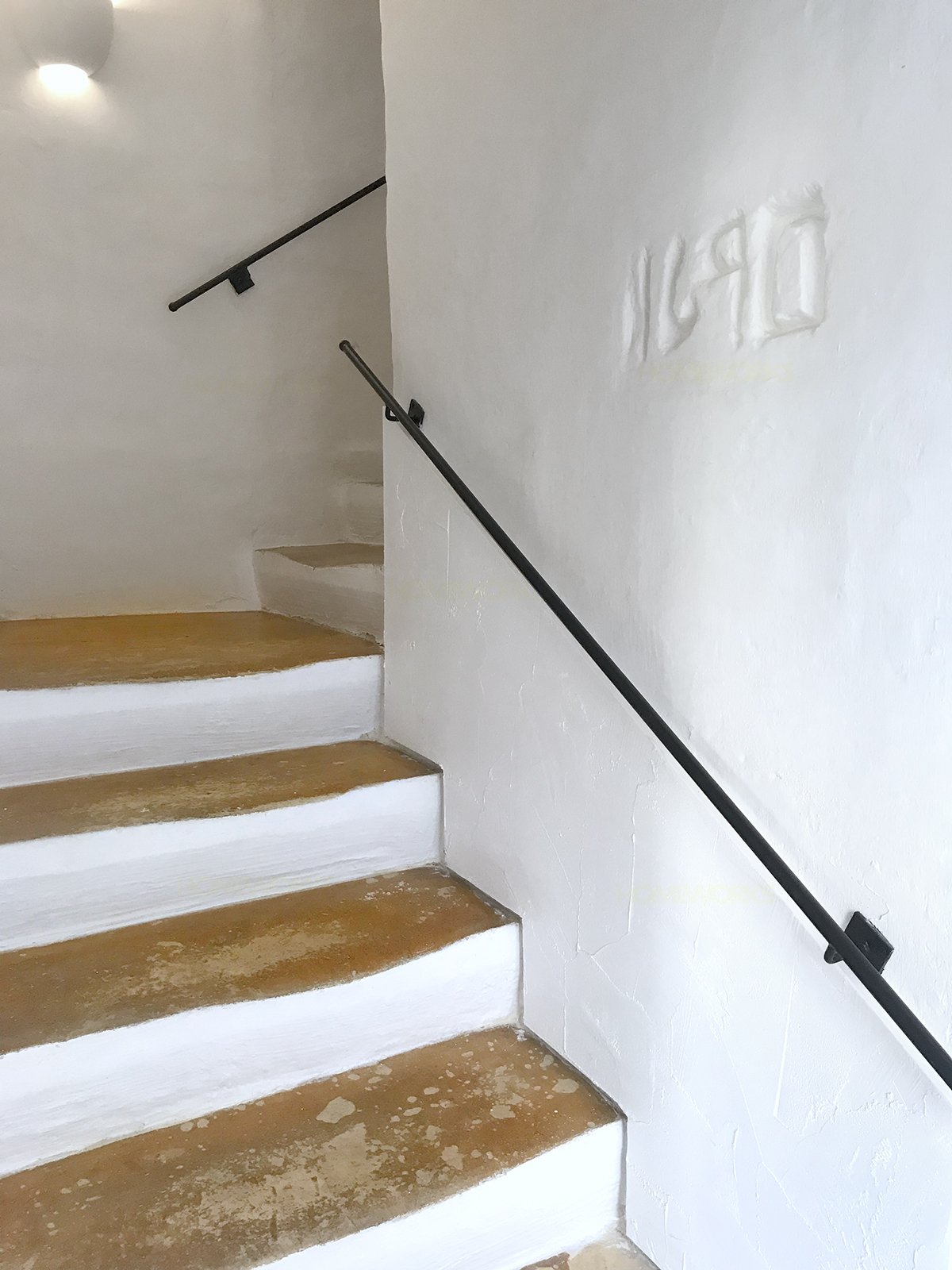 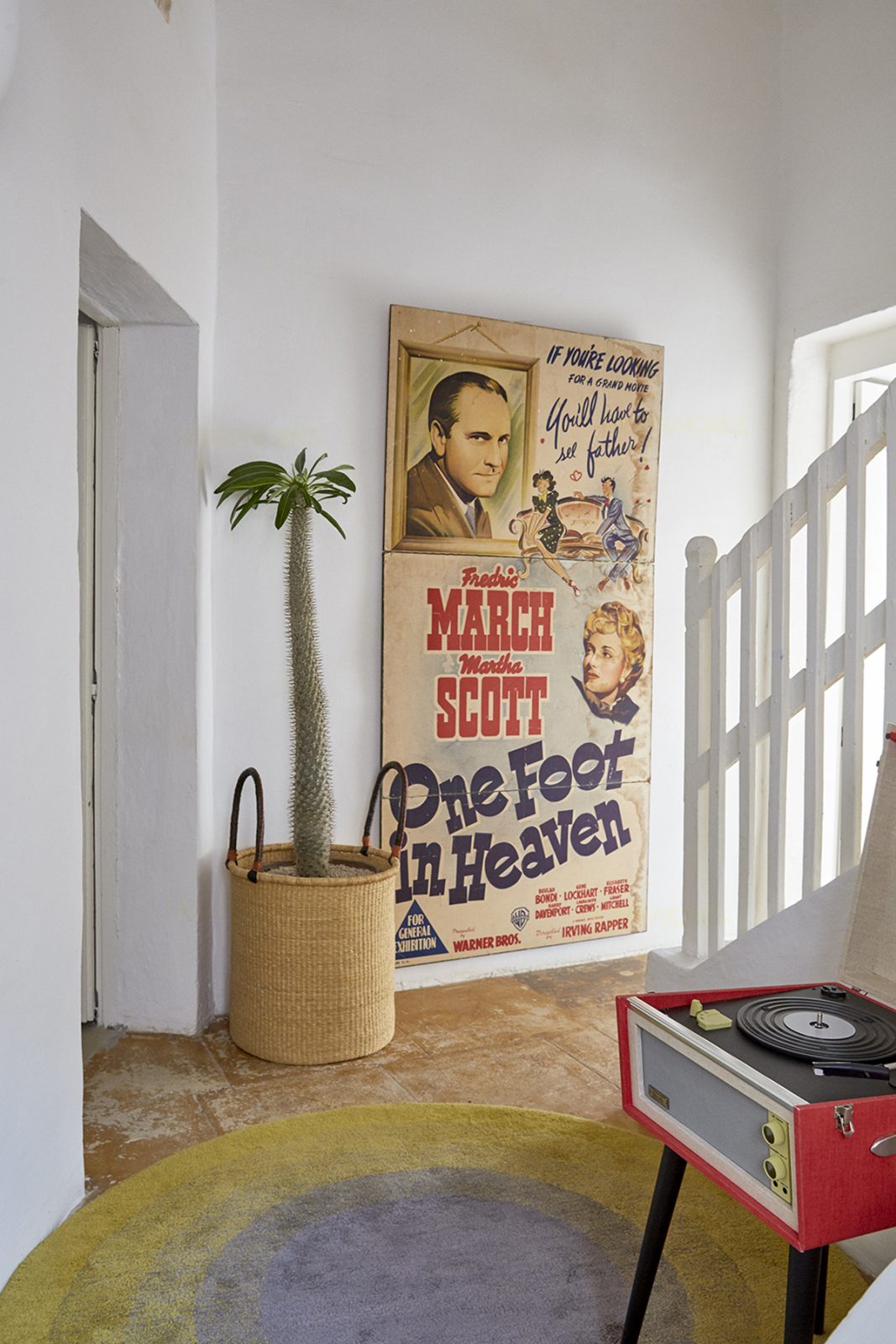 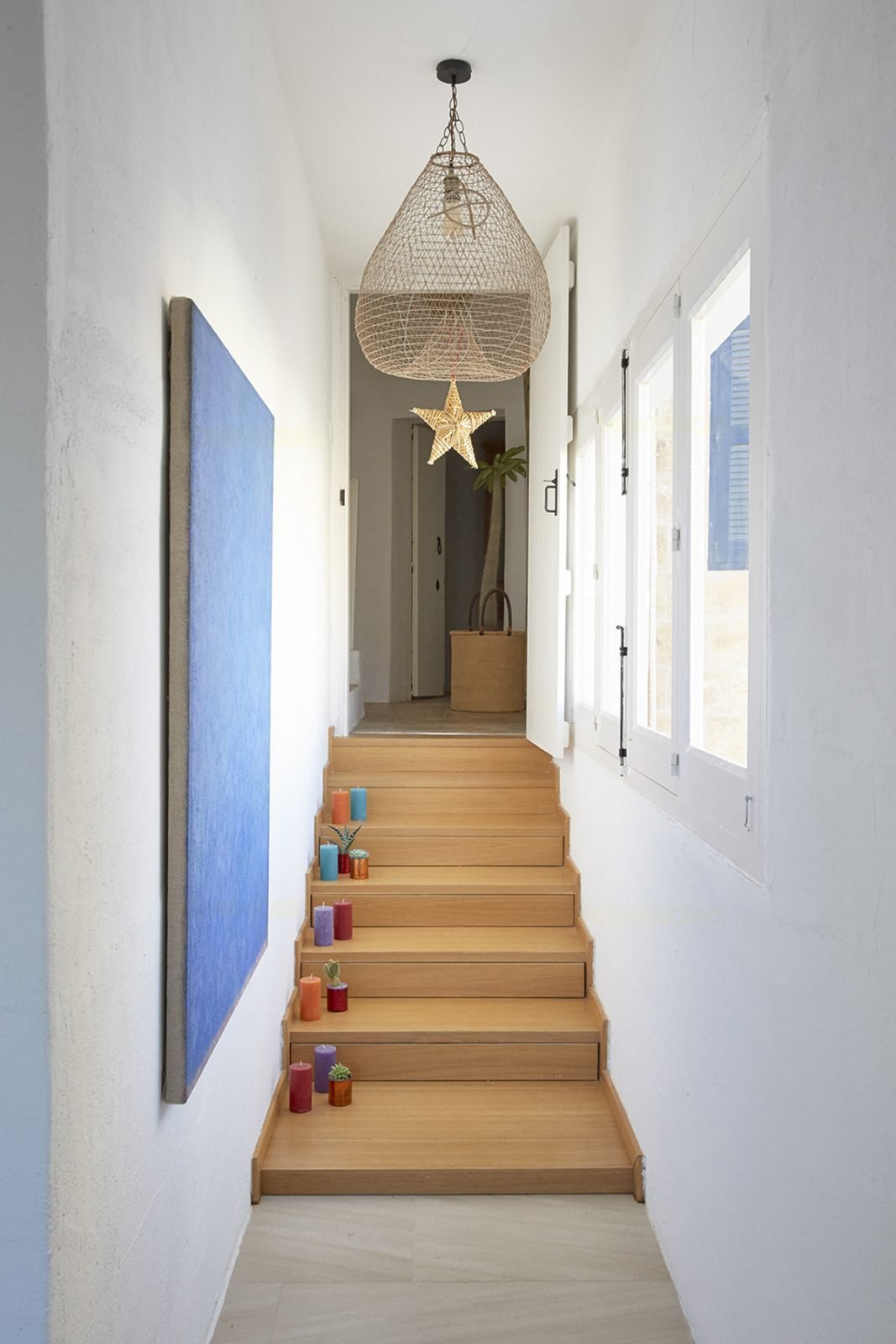 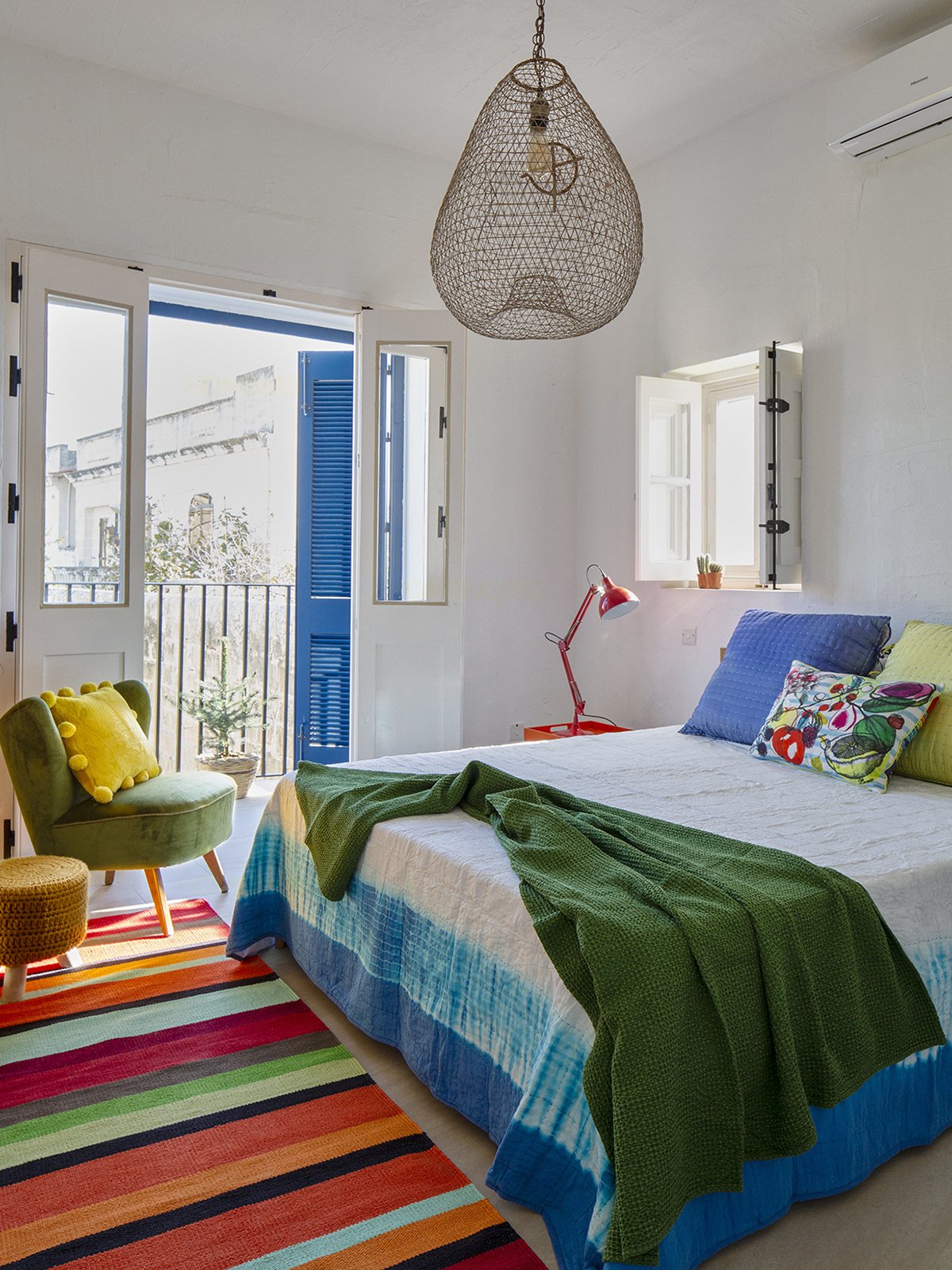 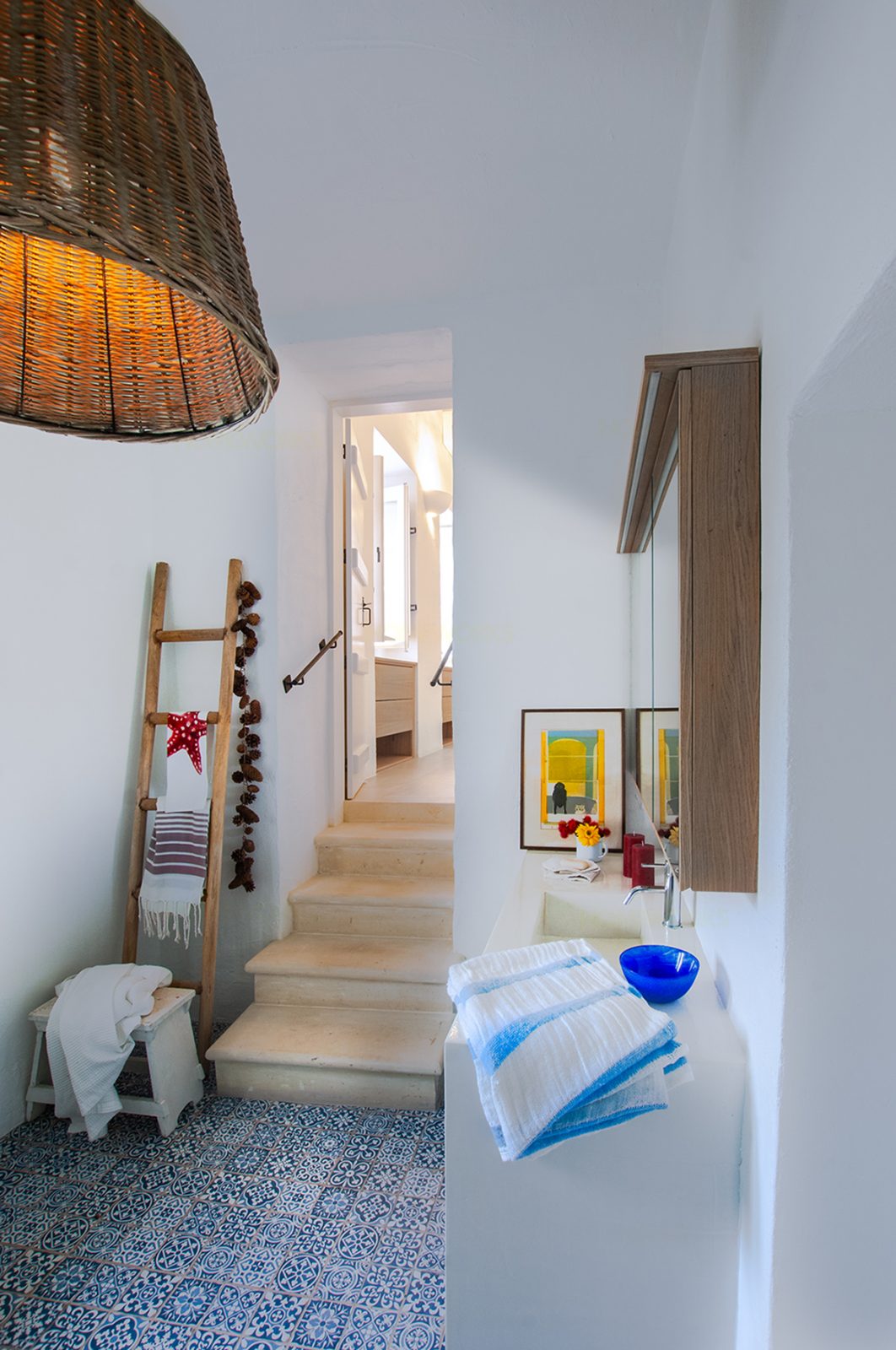 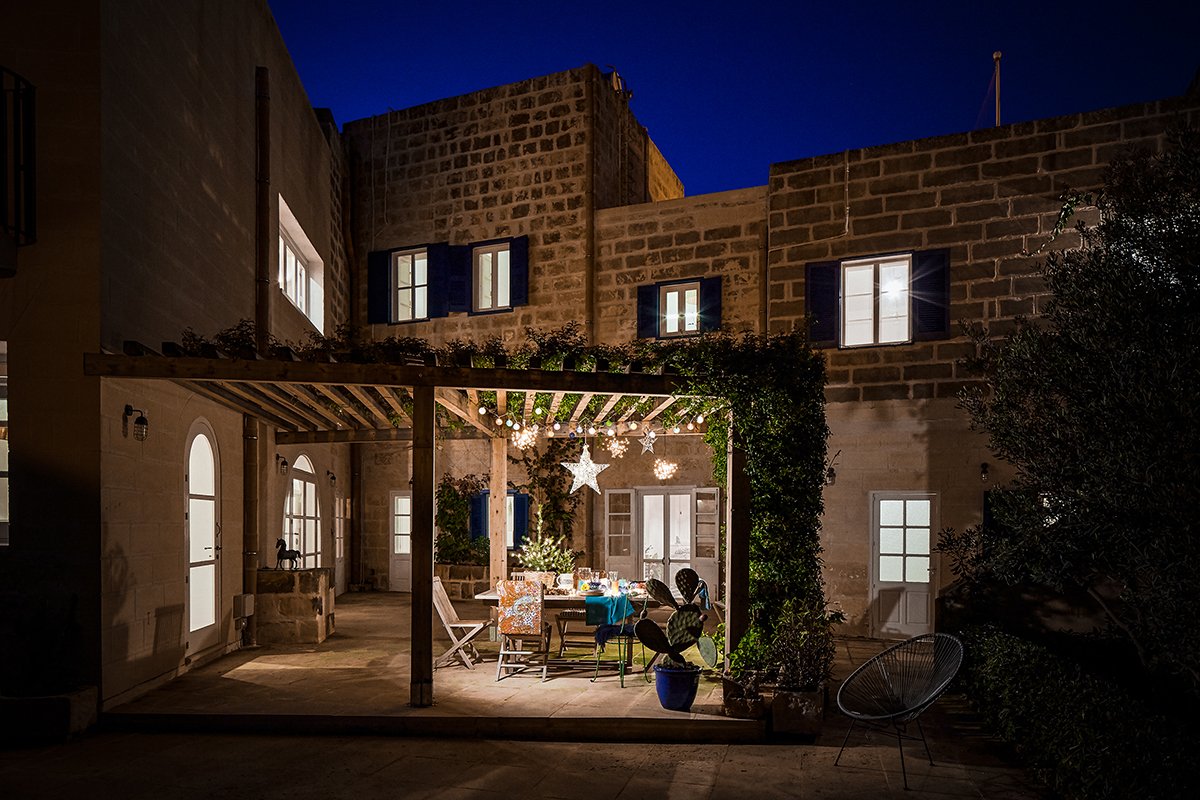