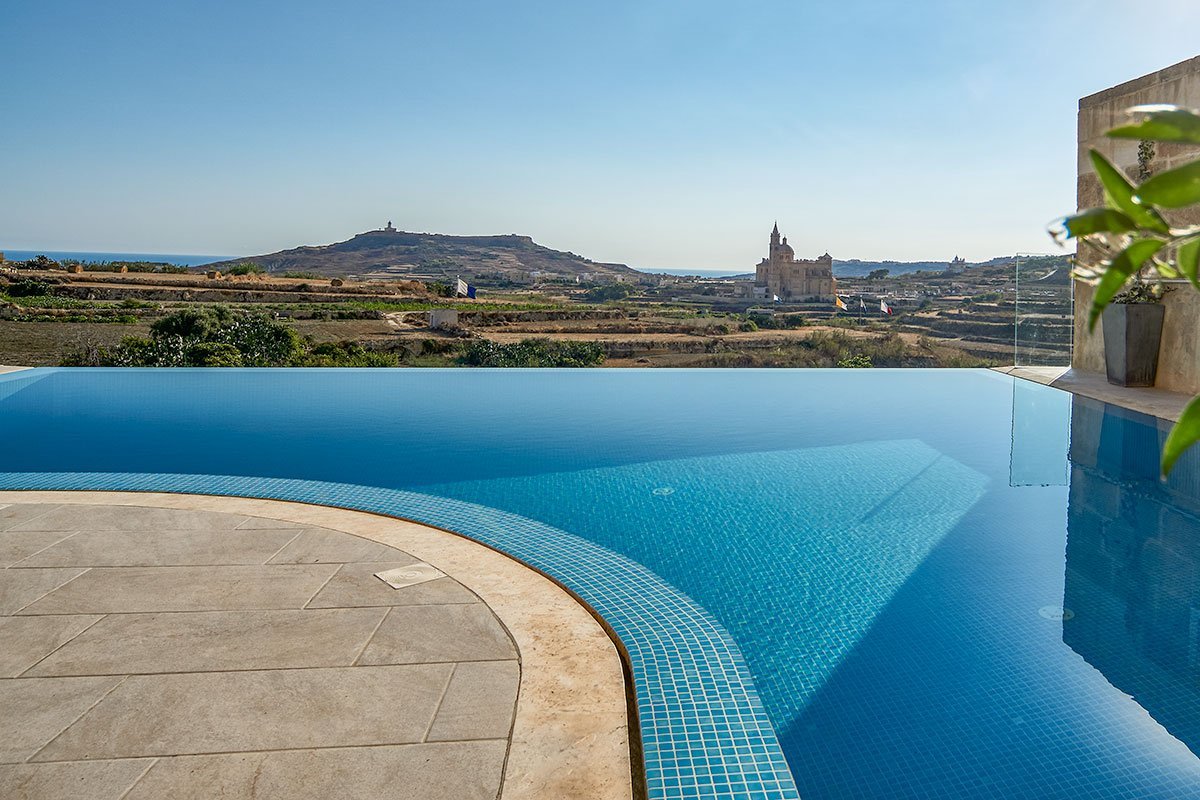 When Danny Scanlon agreed to buy a home in Malta, he had just one condition – he wanted a view. ‘I wanted to be able to sit in the shade and look out,’ he says. And that he certainly has. The house he and his wife, Eve, have in Gozo has a wonderful view to Ta’ Pinu, the shrine’s walls and towers looming out in the flatness of the surrounding countryside. This vista can be spied from the moment one enters the house and from almost all of the rooms, the house orientated to make the most of it.

But it wasn’t always like this. The house, parts of which date back to the 1500s, had been split in two a century or so ago and the couple owned just half of it, what is now the master bedroom and the area beneath, plus a little land outside. Still, it was a house they could afford and it came with a portion of a view. The couple, from England, bought the house in 1987, not long after Eve’s father died, and in memory of him. He, and she, had fallen for Gozo many years earlier when he bought a house there, and Eve has many happy holiday memories. A primary school teacher, she and Danny, an architect, planned to retire here and over the years spent increasing amount of time here. Then, five years ago, the couple was able to buy the other half of the property and return it to one large house, along the way creating the kind of home they once could only dream of. However, it meant many months of major work. ‘We had to start all over again,’ says Eve. ‘Everything we had done before, from the plumbing to the layout, did not work when it became one house again.’ The couple lived in one room while the 18-month renovation went on and as Danny is an architect, and one experienced in working on historic buildings, they were able to design and manage the project themselves. The layout was re-configured with walls knocked through to create spacious and airy rooms, and original arches, beautiful in their symmetry, restored. ‘Instead of one, we now have three arches that lead into courtyard; and off the kitchen, large arched windows that allow a lot of light in,’ says Eve.

‘We exposed all the walls again and in so doing discovered that one wall was unsupported,’ says Danny. ‘We re-pointed the walls with lime mortar which is more suitable for buildings of this age.’ Underfloor heating was installed downstairs to ensure that in the colder months the house felt ‘cosy’. Outside, the original pool was demolished, replace by an infinity pool set within a smart terrace that makes the most of the views. To ensure the house is energy efficient, air-source heat pumps are used to heat the water and there are photovoltaic panels on the roof. Inside the furniture is classic but with numerous design twists that give the house its own distinctive style. ‘We like the warmth of older furniture and adding colour through fabrics, wall hangings and paintings, as well as the things we have collected over the years,’ says Danny. Adds Eve: ‘I like bling which is why there’s a lot of sequins and beads, as well as lots of fabric!.’ Much of the furniture and accessories is what they had when the lived in the UK, transporting it all over in a 40ft container. To this they have added local pieces and materials such as traditional Maltese tiles. In acquiring the other half of the house, they also gained a substantial amount of outdoor space and as well as the courtyard with its old-style steps and balustrades, there is now an expansive modern terrace and pool area which is where the couple spend most of their time. Now retired and living in Gozo permanently, on summer mornings it is where they take their first coffee of the day, and come the evening, they retire here, a cool drink in hand, all the while soaking up the view – just as Danny imagined, all those years ago.

Stretching the length of the house, and accessible from the kitchen and living room, the terrace is where Danny and Eve, and their many guests, spend much of their time – using the pool, eating and, of course, enjoying the view

Part of the large open-plan space that also contains the living room, the neutral colour palette work well with the stone walls. It is lifted by the vintage cabinet with its bright re backing, the colour also linking the space to the living room

The classic style of furnishings is given a twist with Indian wedding saris, which Eve collects, framing the windows

An internal room, the couple chose to paint this room a rich red for a warm and cosy feel. ‘It’s more a winter room,’ they say

A lovely space that’s full of light, the bathroom is beyond the arch but open to the bedroom. On the beds and at the windows are vintage linen and lace that Eve collects

Eve always wanted a slipper bath, and behind the screen, decorated in wallpaper for colour, is a shower

It may be away from the view, the courtyard offers many different quiet places to sit and soak up the sun or rest in the shade

It may be away from the view, the courtyard offers many different quiet places to sit and soak up the sun or rest in the shade

Sheers bring the space to life, providing shade but also movement as they flutter to the breeze

Off the inner courtyard, this area leads into the oldest part of the house which houses the library and study

Off the inner courtyard, this area leads into the oldest part of the house which houses the library and study 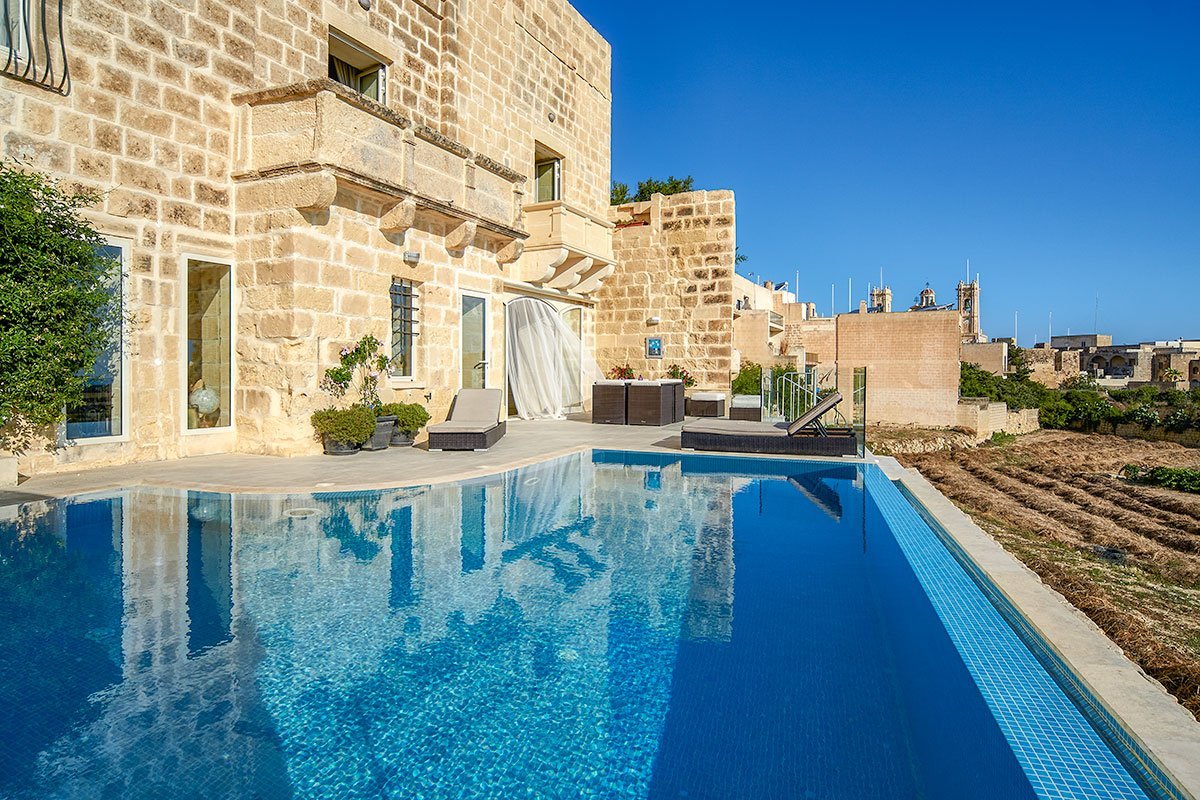 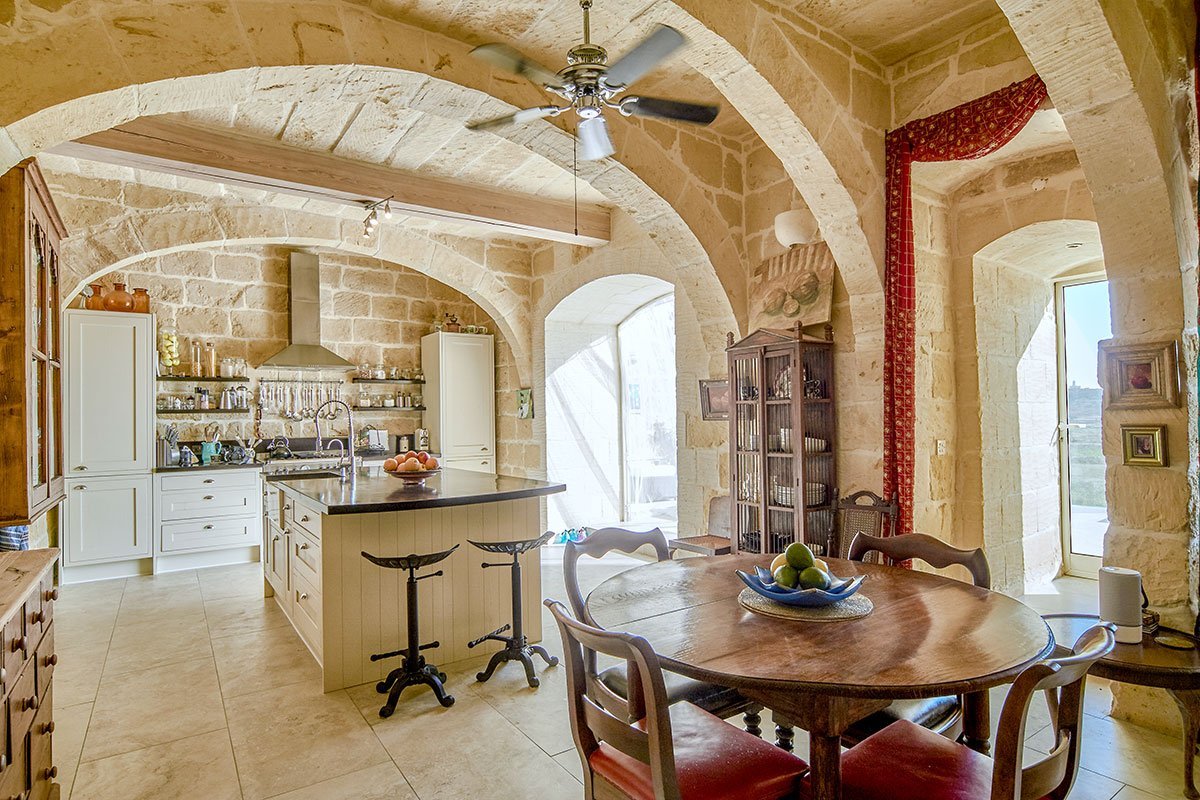 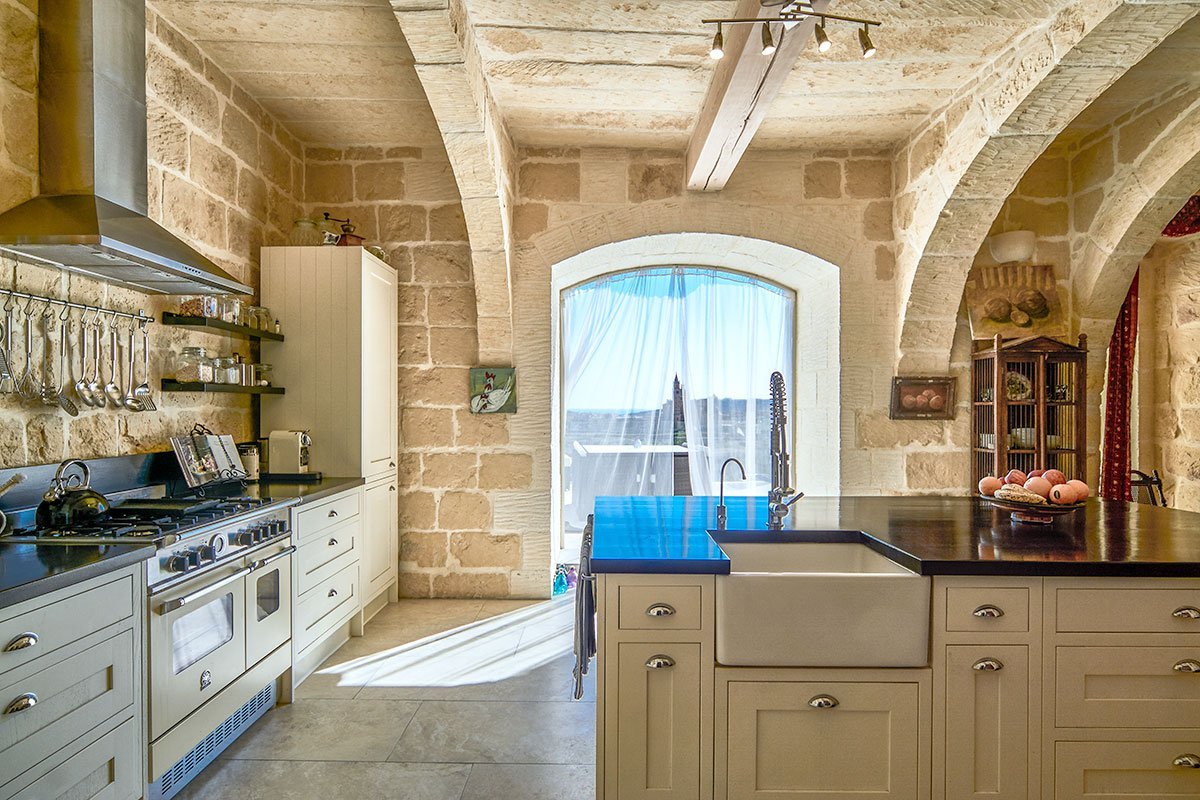 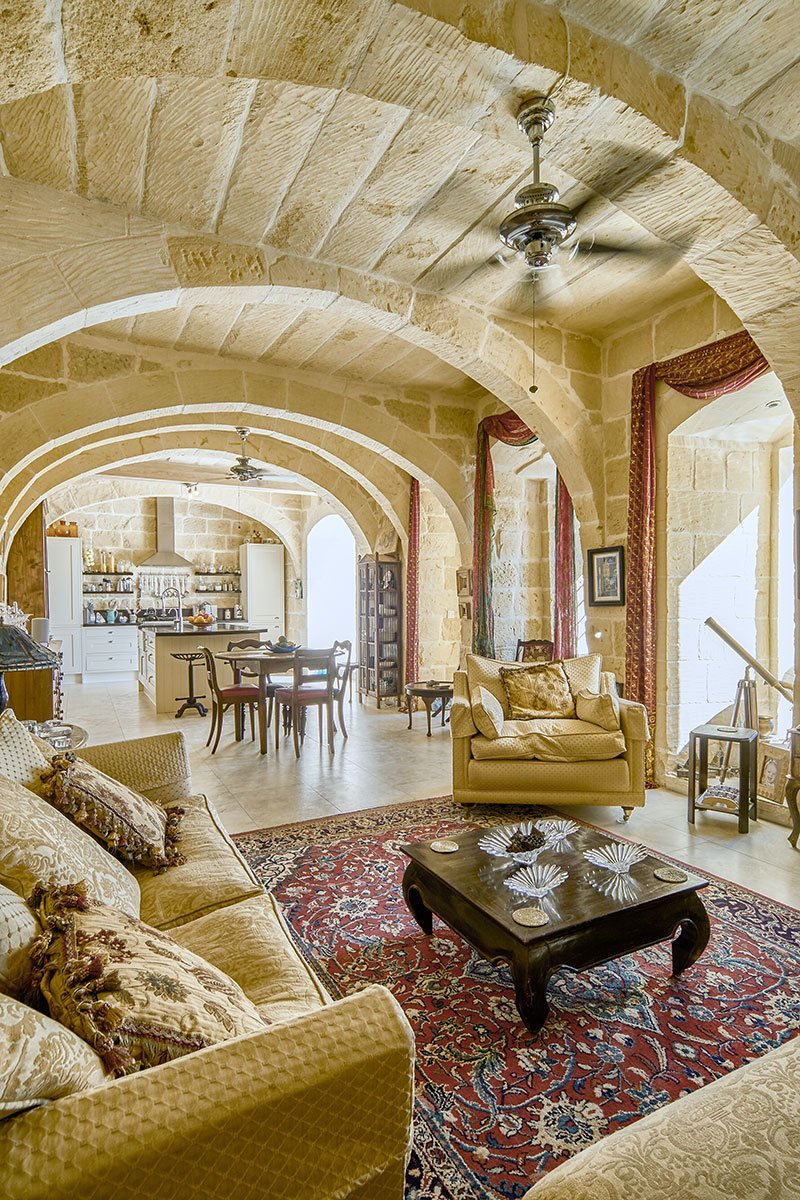 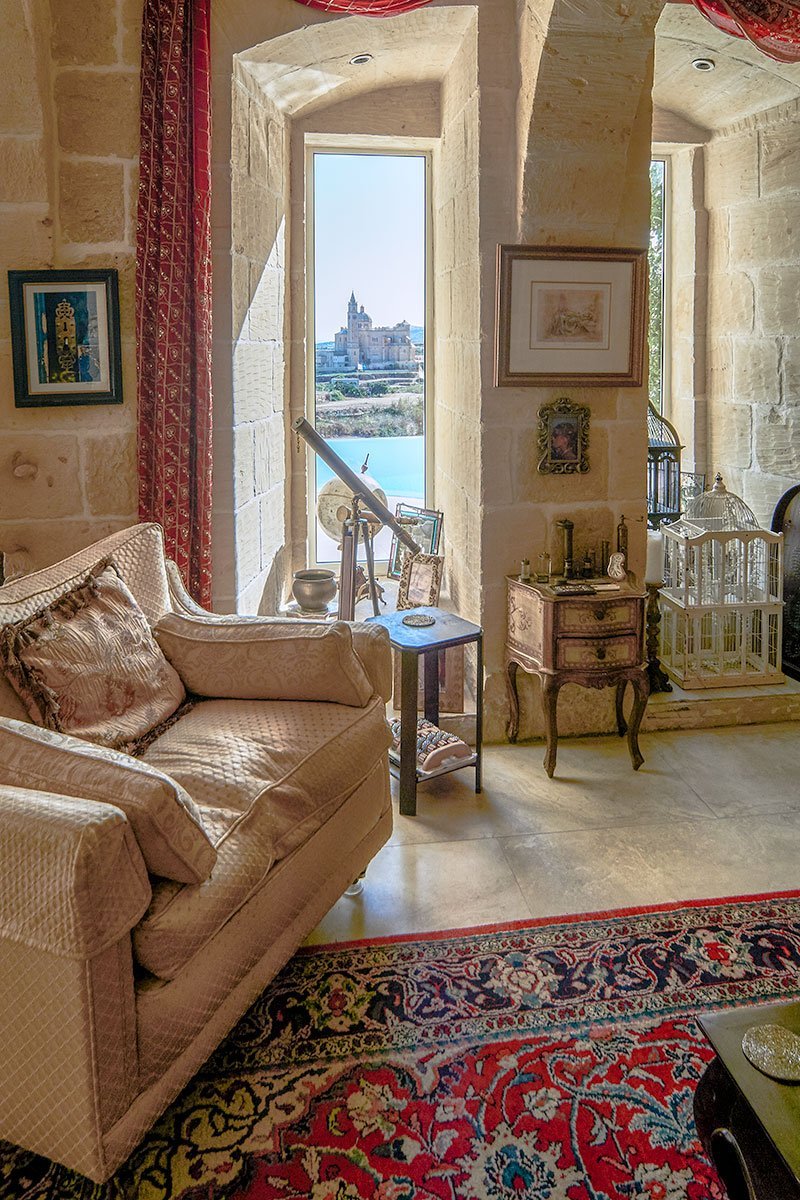 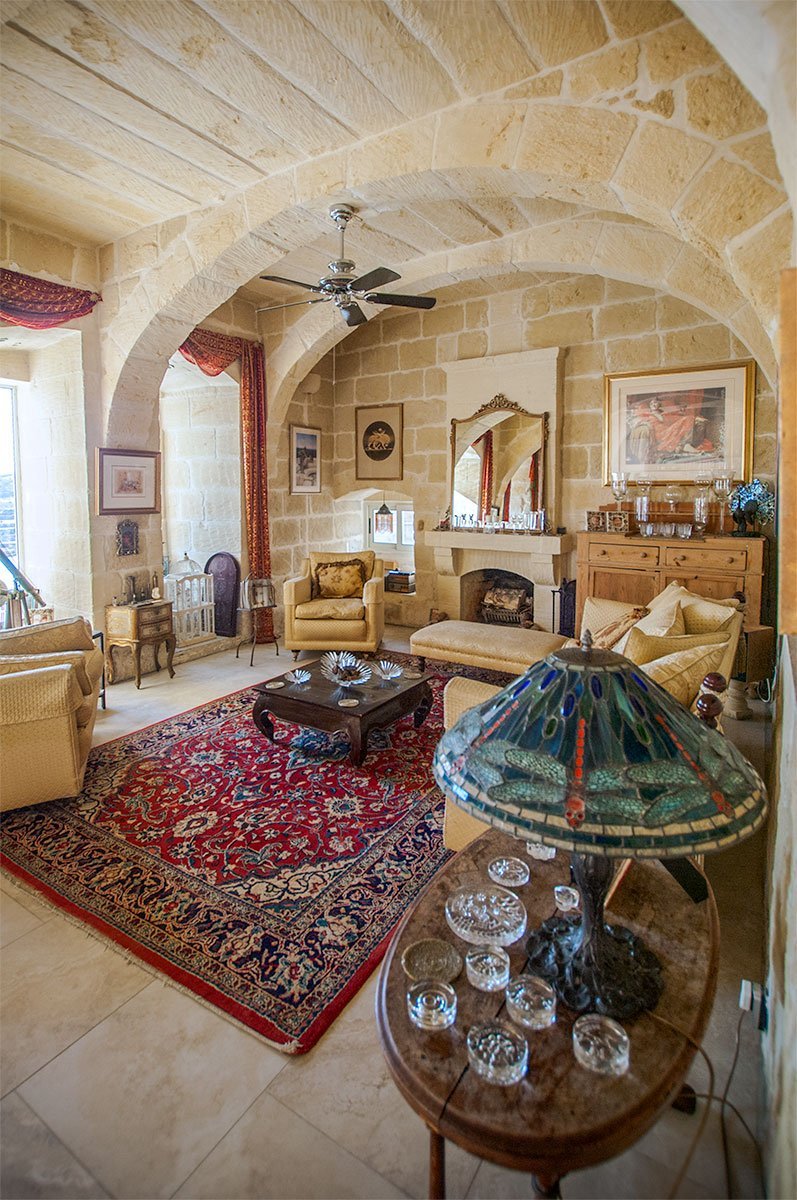 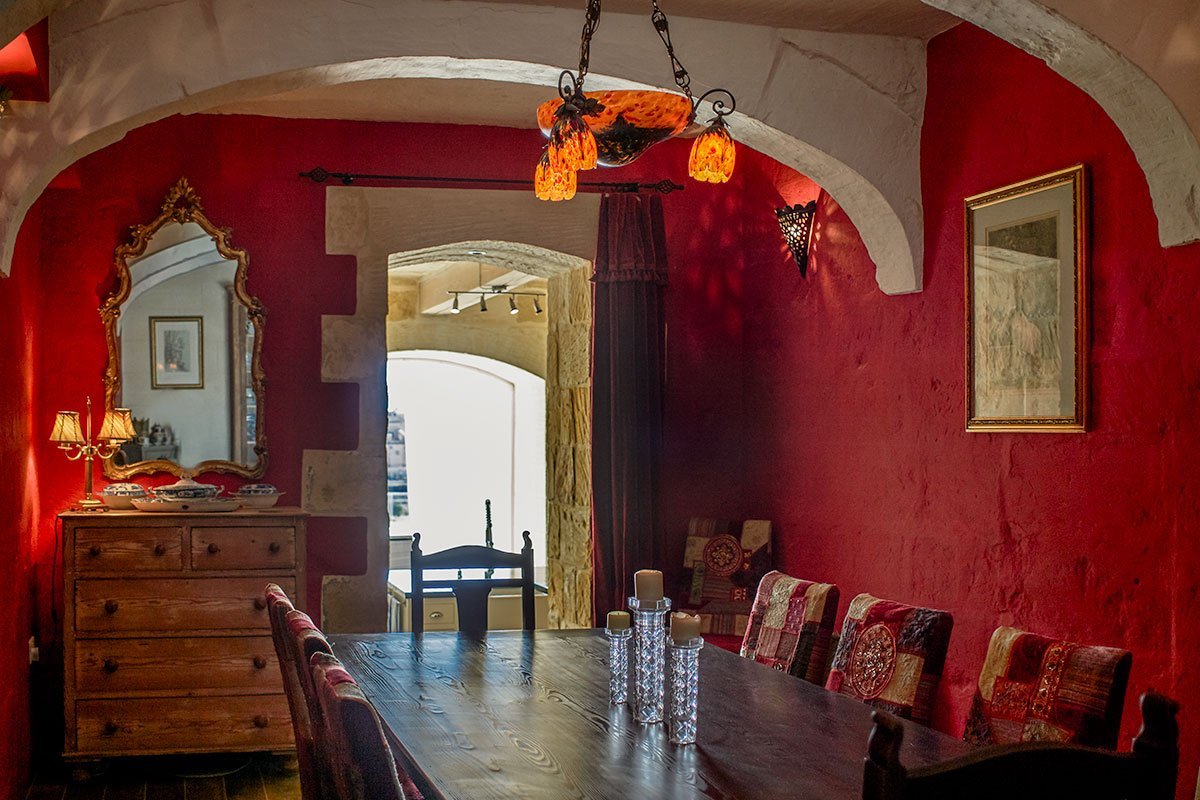 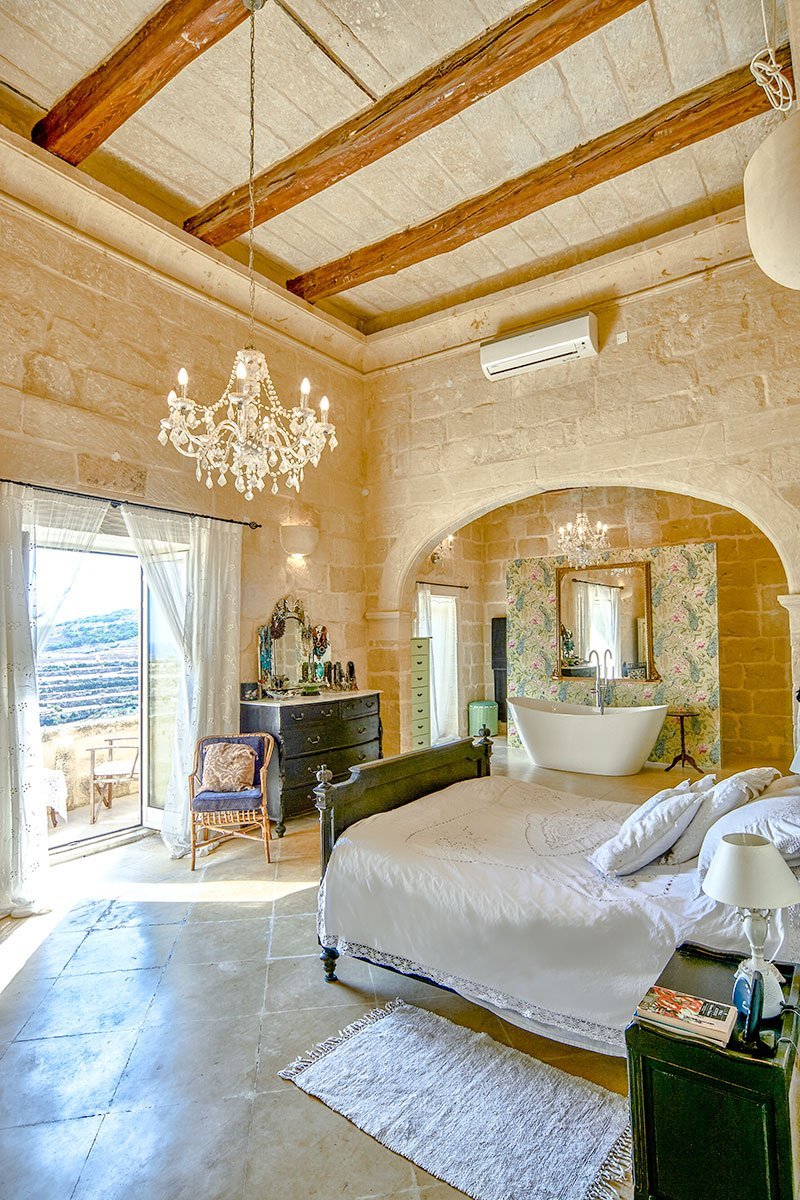 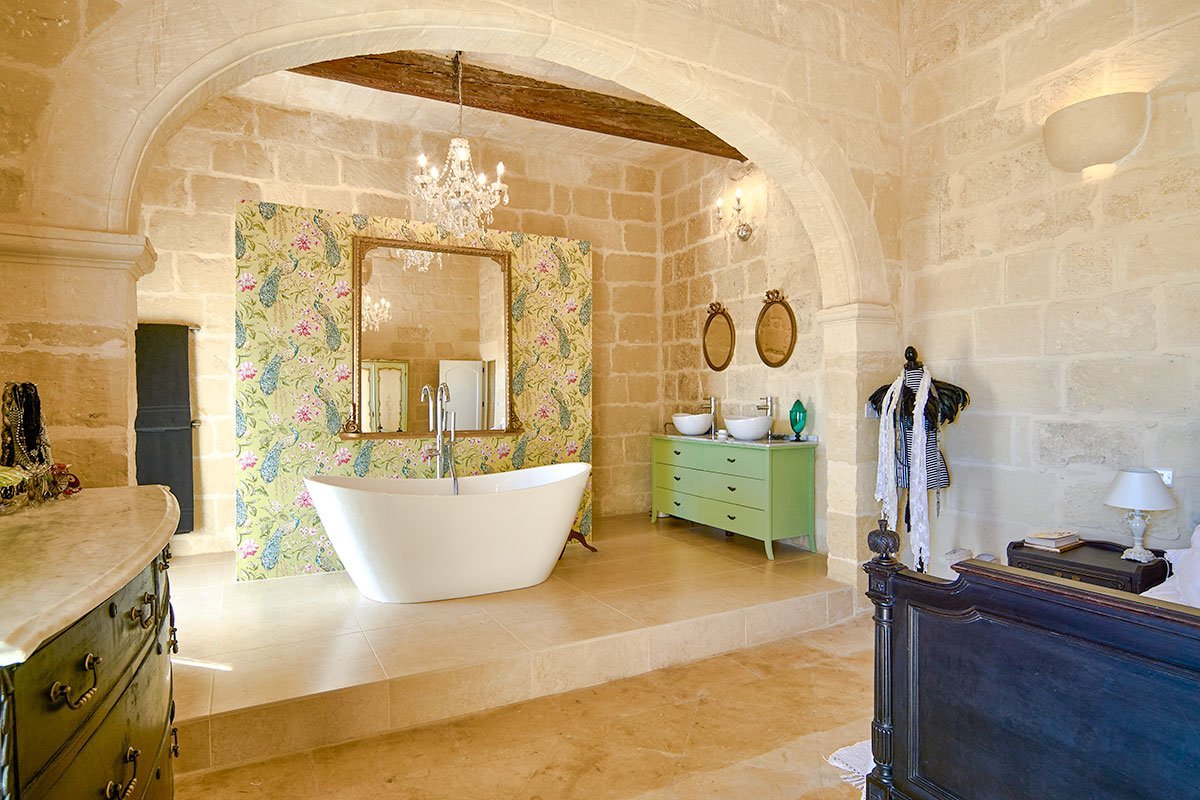 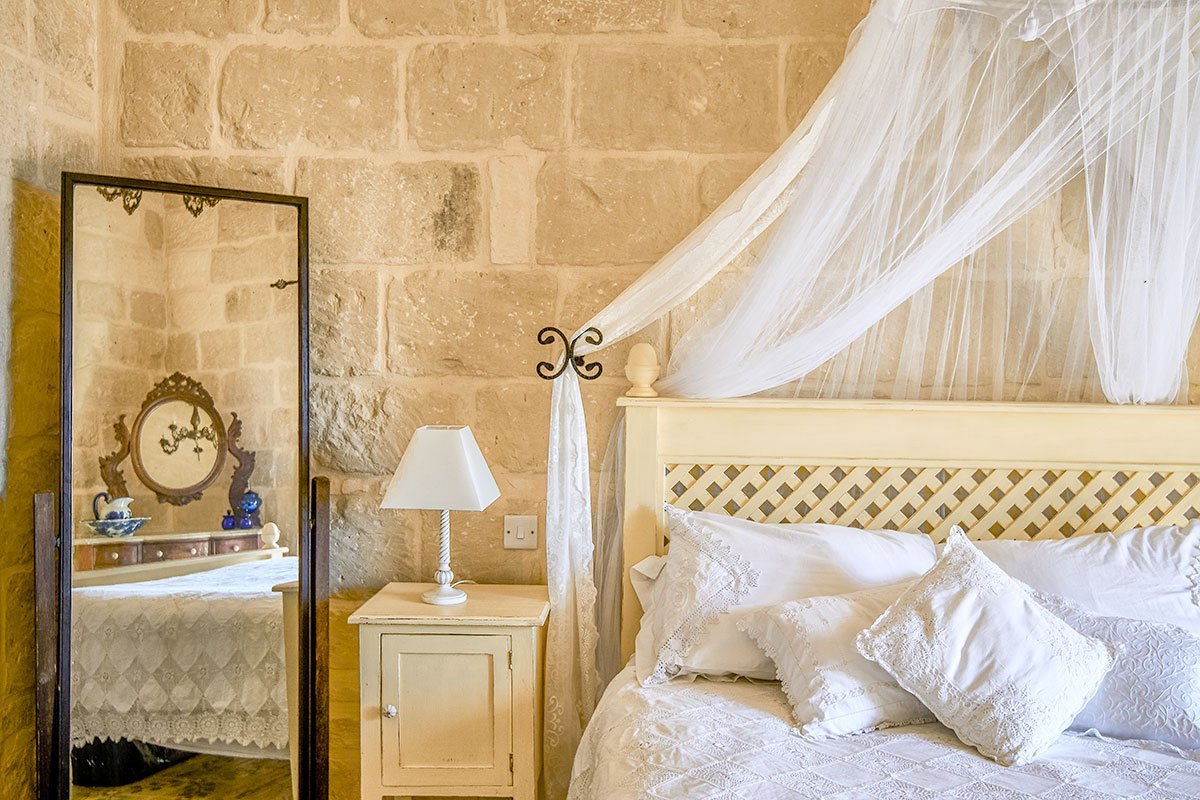 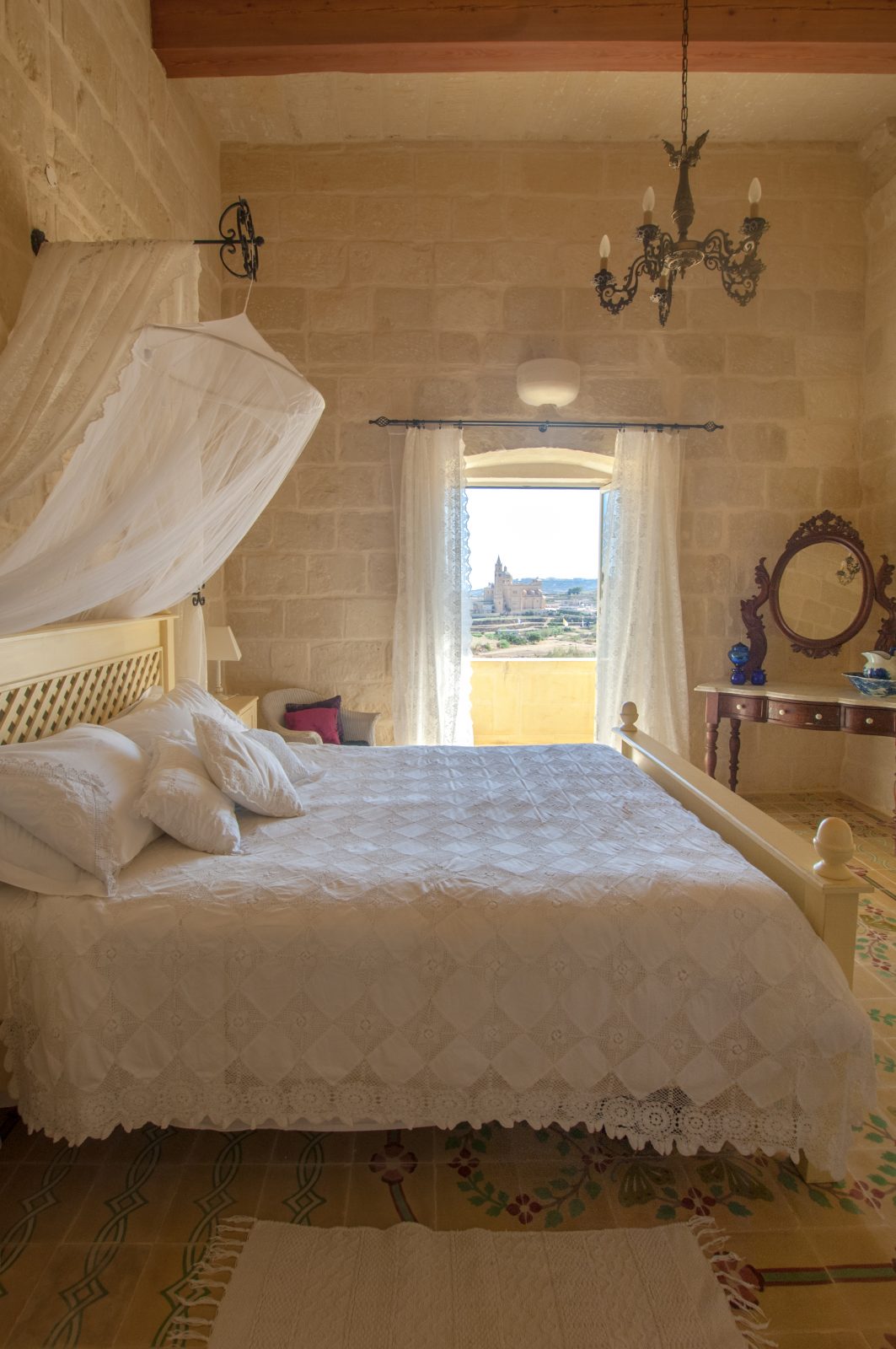 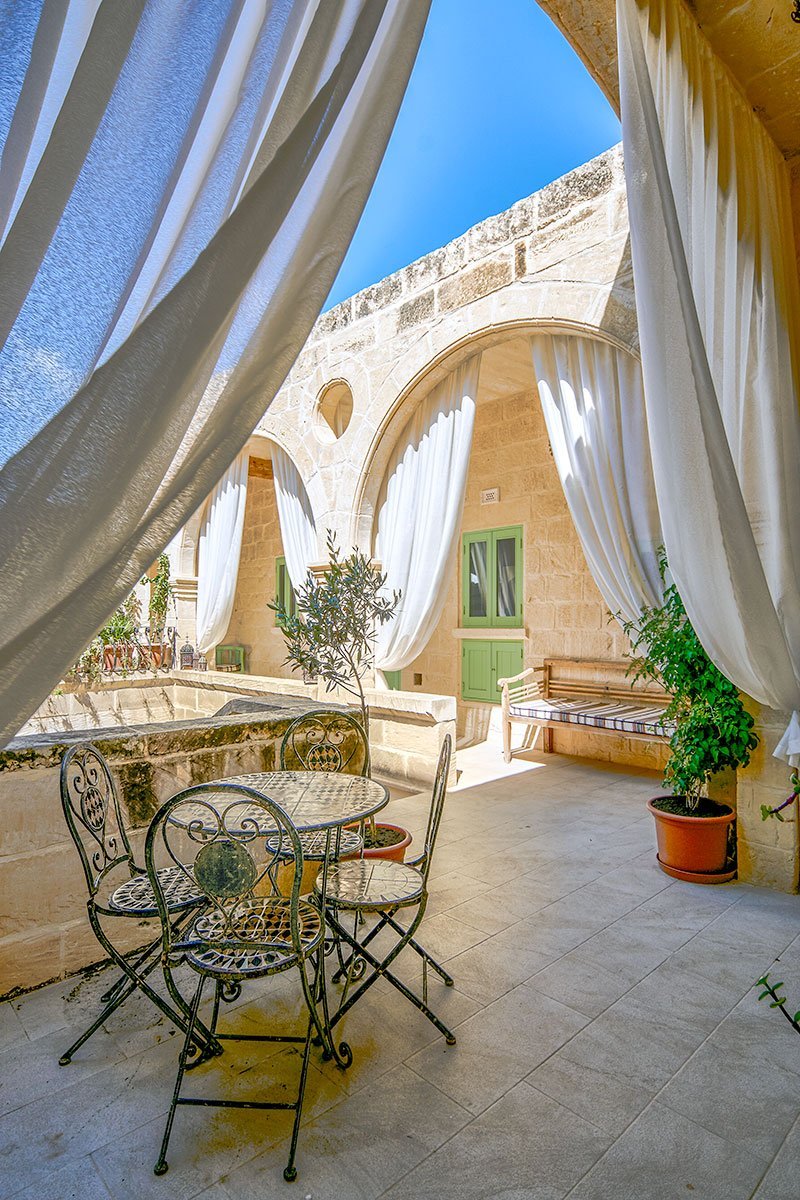 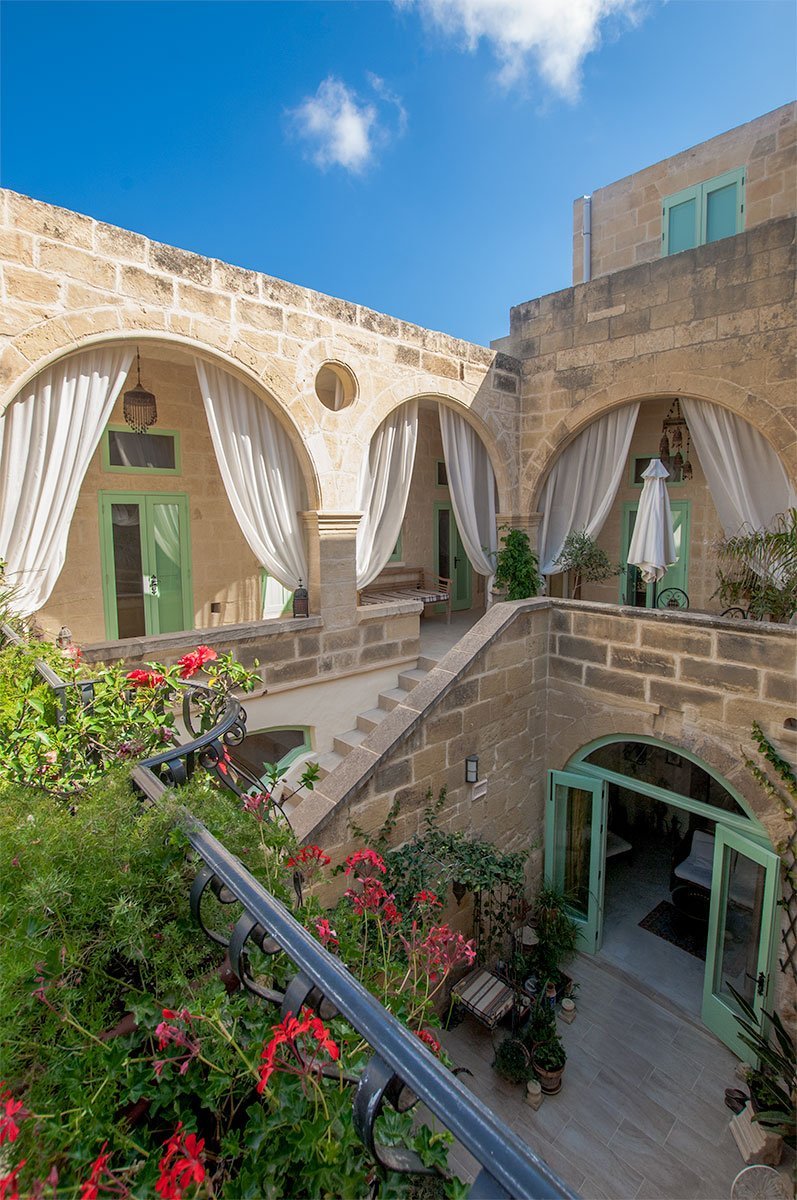 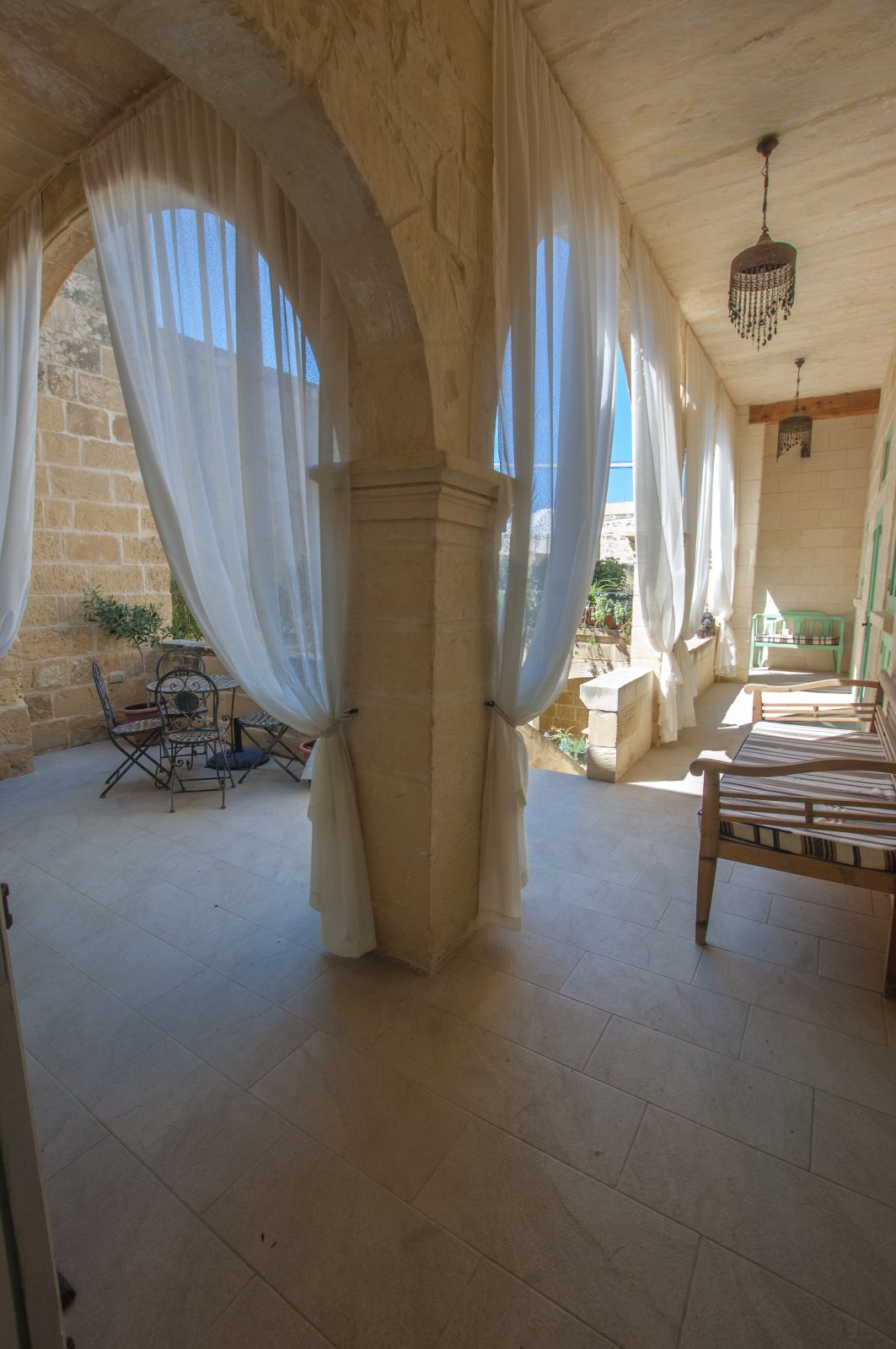 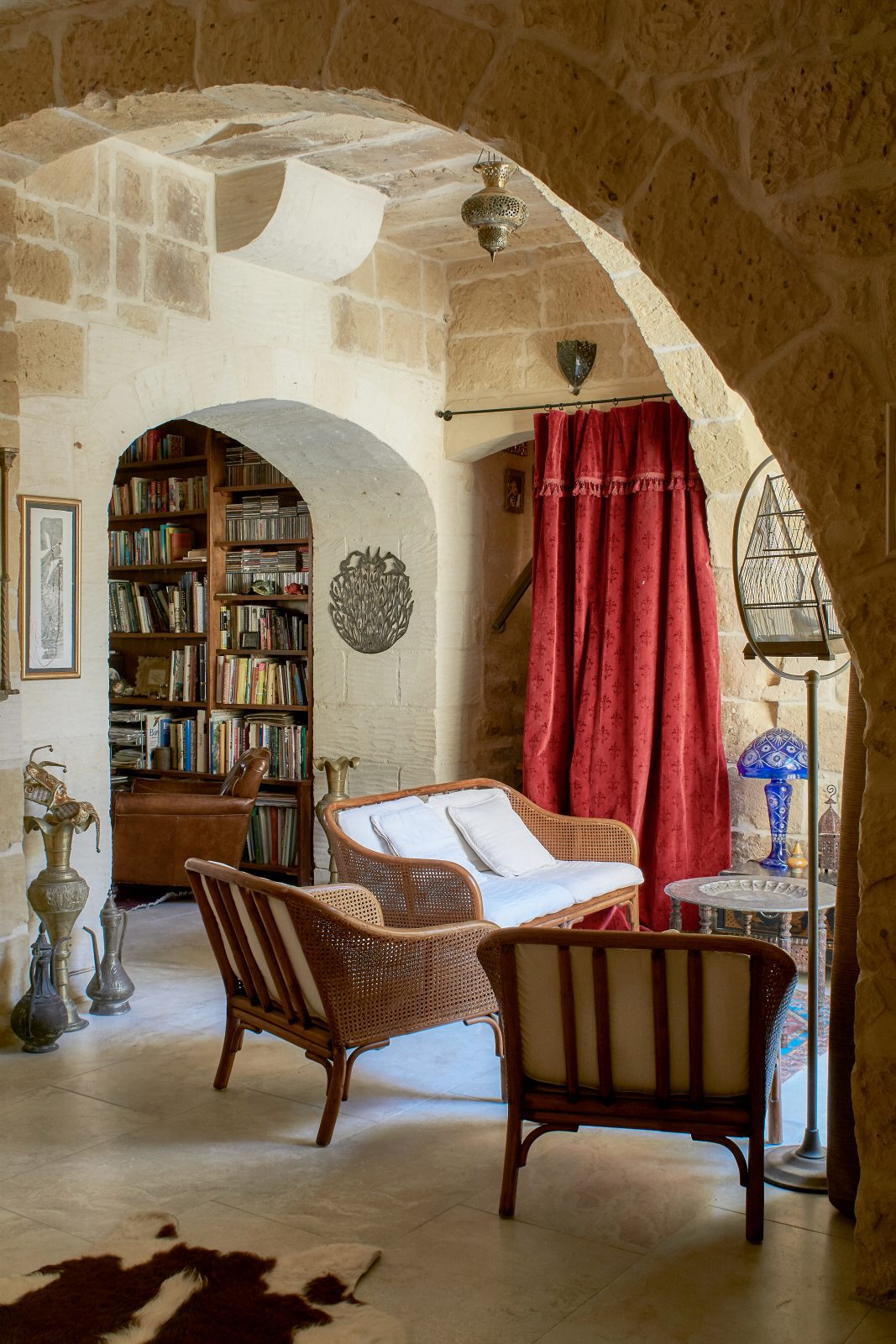 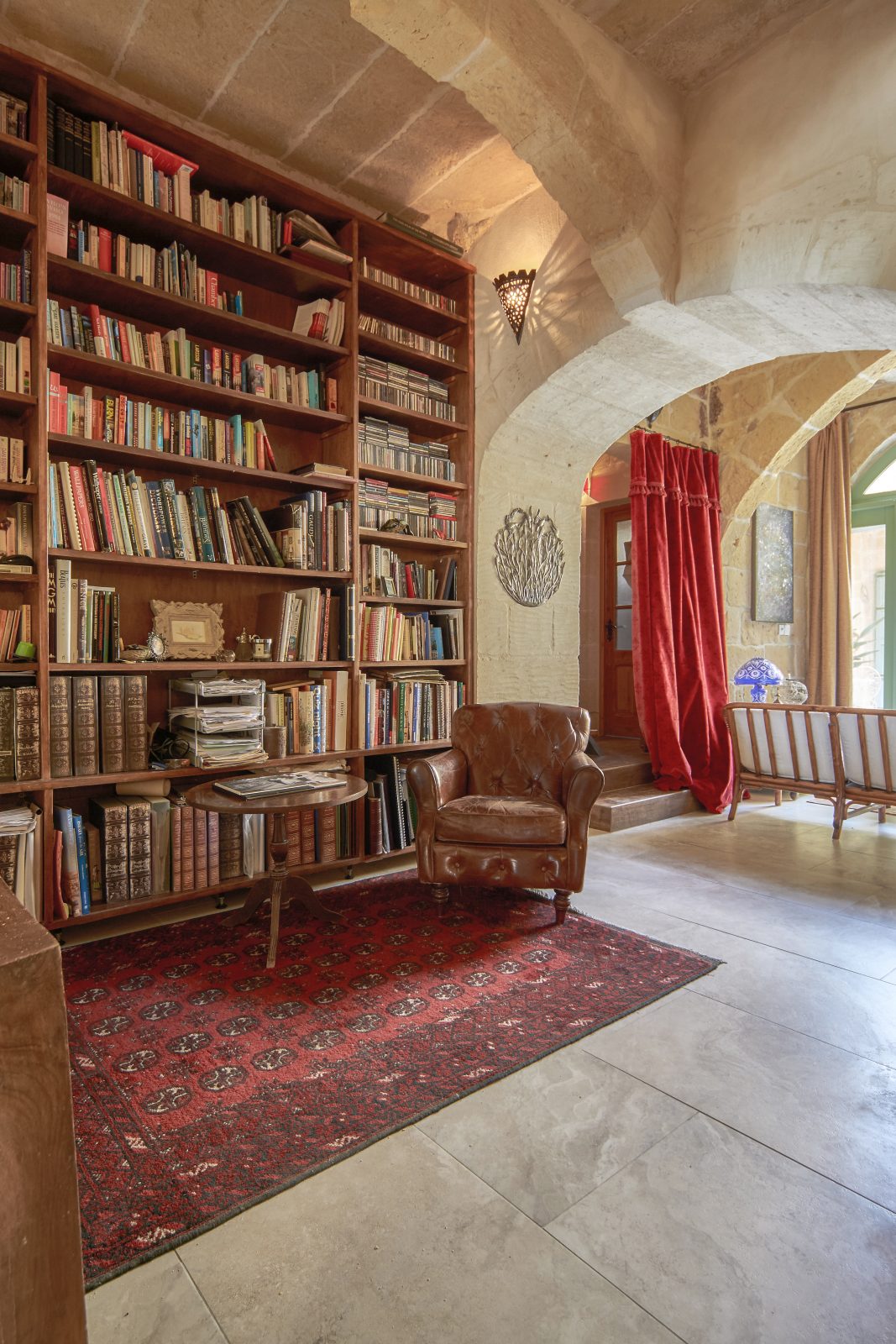