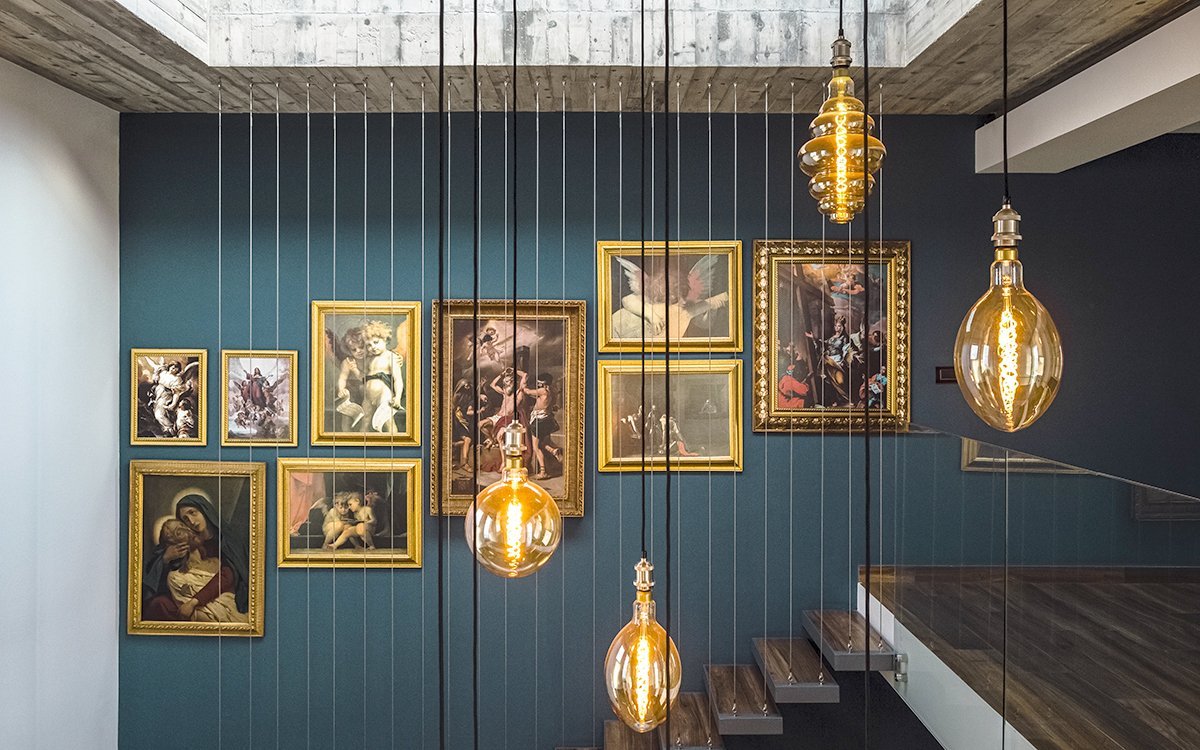 How do you downsize your home when the children have flown the nest? For many people the solution is to sell and buy somewhere smaller, but this independent couple chose a different path – they built on their existing maisonette to create a brand new penthouse for themselves, and at the same time, converted the maisonette into two apartments, one each for their children.
‘The clients had lived in their home, a typical maisonette, for 25 years,’ says Ryan Calleja who was responsible for the renovation. ‘To celebrate the silver anniversary of the building and their marriage, they decided they needed a change of pace – a smaller, more intimate space that best reflected the lifestyle that they envisaged for the rest of their life.’
The original plan was for a simple one-storey apartment, especially as the budget was tight, but as time when on the space expanded upwards. ‘But the extra volume needed to have some architectural quality that made the aesthetic experience of being within the place worth the extra effort and cost,’ says Ryan. ‘It was important to find a visual language that complemented the vast vertical space over the kitchen/dining space that the upper level created.
This was done through a combination of both vertical and horizontal elements that balance each other out. ‘The verticality of the void, as well as a double-height window, a long, suspended chandelier chandelier and vertical tile wall were countered by horizontal elements such as the bridge that gives access to the front yard, and floating staircase,’ explains Ryan. ‘As well, both vertical and horizontal skylights and vertical shaft windows create a dynamic environment that changes throughout the day with the light.’
Beyond the architectural details, a bold decorating scheme also elevates the apartment into something special. A dark blue feature wall is the perfect backdrop for the couple’s collection of gilt-framed paintings and a large framed frieze of Maltese tiles reaches from the ground floor to the ceiling giving colour and interest to what would have otherwise been a vast blank wall. Elsewhere, chunky columns, that were part of the original decor in the maisonette, are used as supports for the coffee and dining tables.
‘Some of the design was governed by items that had sentimental value,’ says Ryan. ‘And other decisions were made in order to accentuate these major design features, all the while integrating a pop of colour that makes the space a bit more vibrant.’
One of the most difficult design decisions was choosing the flooring. ‘We went through hundreds of tile samples before settling on the parquet and main floor tiles,’ says Ryan. ‘We wanted to make sure that the vastness of the floor acted as a background to the rest of the furniture but without being visually boring. This decision was made even more important as the upper level gives a birds-eye view of the living space.’
The build itself was relatively straightforward although the clients living in the building throughout the work added an extra dimension. ‘That created challenges bigger than I could have ever predicted such as keeping a constant supply of water,’ says Ryan. ‘It was also a self-build project, the clients, with myself helping some of the time, taking care of all the construction and most of the finishing works within the site. Luckily, a site visit was just two flights of stairs away!’
Today, a year and a half later, the apartment is completed and the new arrangements suit everyone. ‘Taking the plunge and literally risking the roof over your head in order to pursue such a project was never an easy decision,’ says Ryan. ‘Yet, the excitement by which the clients describe their new dream home shows that it was worth it in the end.’
What is it like to live in their new home? ‘Every morning, we wake up to a view we love, brew a coffee in a kitchen we love as we sit around the dining table, looking upwards at the changing sunrise sky,’ say the homeowners. ‘ No matter what the day will bring, starting it off in a home you built, surrounded by the ones you love within a setting that truly reflects the lifestyle you always dreamed about is an experience that never grows stale. You only get to appreciate the power that a home can have on your life when you get to experience such a pleasure.’

One long wall is painted a dark blue, ensuring the gilt frames of the gallery wall of paintings really stand out. The stairs are made from the same walnut texture gres tile that is used for the upstairs ﬂooring.

The cement-tile artwork decorates what would otherwise be a bare white wall, its size mimicking the proportions of the single two-storey high vertical window that sits adjacent to the wall. To create the pattern, the tiles were laid on the ﬂoor and moved around until the clients liked what they saw

As well as a second bedroom and a small alcove for reading, the second ﬂoor features a bridge that gives access to the front and rear terraces.

A mainly neutral space with a pop of colour thanks to the yellow armchair. The porcelain tiles on the ﬂoor and cladding around the ﬁreplace are from Italian brand COEM and were carefully chosen for a look that was interesting but still worked as a background surface.

A number of the apartment’s decorative touches have their origins in the maisonette such as the chunky column that acts as a support for the coffee table. The gilt-framed paintings are a collection that the homeowners have had for many years.

Hanging over the dining area, the statement chandelier acts as an artiﬁcial light source that forces the user to look upwards towards the bare concrete ceiling as well as the skylight. Custom-made, the height and placement of each element is a derivative of a downward spiral, and an algorithm was used to create a seemingly random pattern.

A faux panelled wall gives the room visual interest and painted a dark grey creates a sophisticated ambience that is accentuated by the custom-made buttoned headboard upholstered in an eco-friendly leather.

A faux panelled wall gives the room visual interest and painted a dark grey creates a sophisticated ambience that is accentuated by the custom-made buttoned headboard upholstered in an eco-friendly leather.

A geometric pattern in the shower area gives the bathroom a chic decorative touch. The vanities are custom made of stained ash. 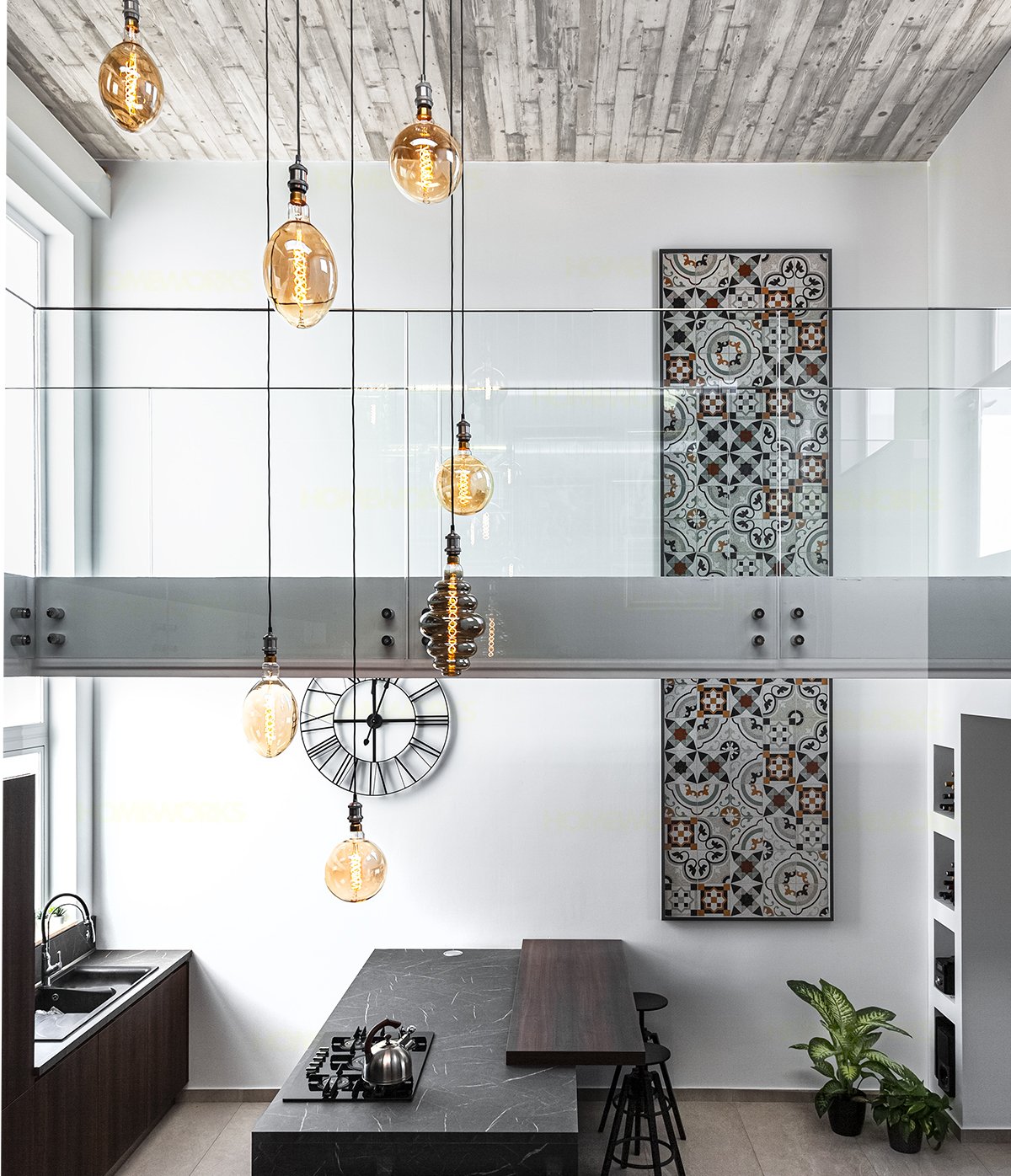 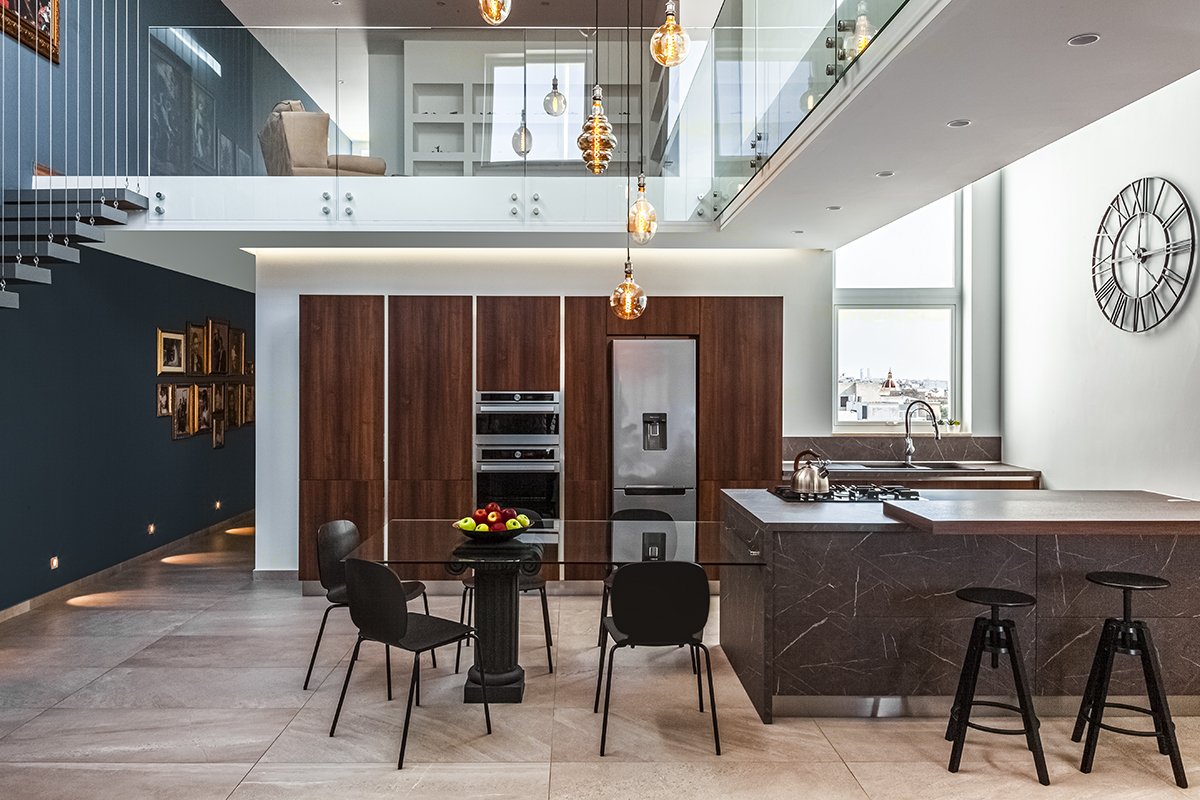 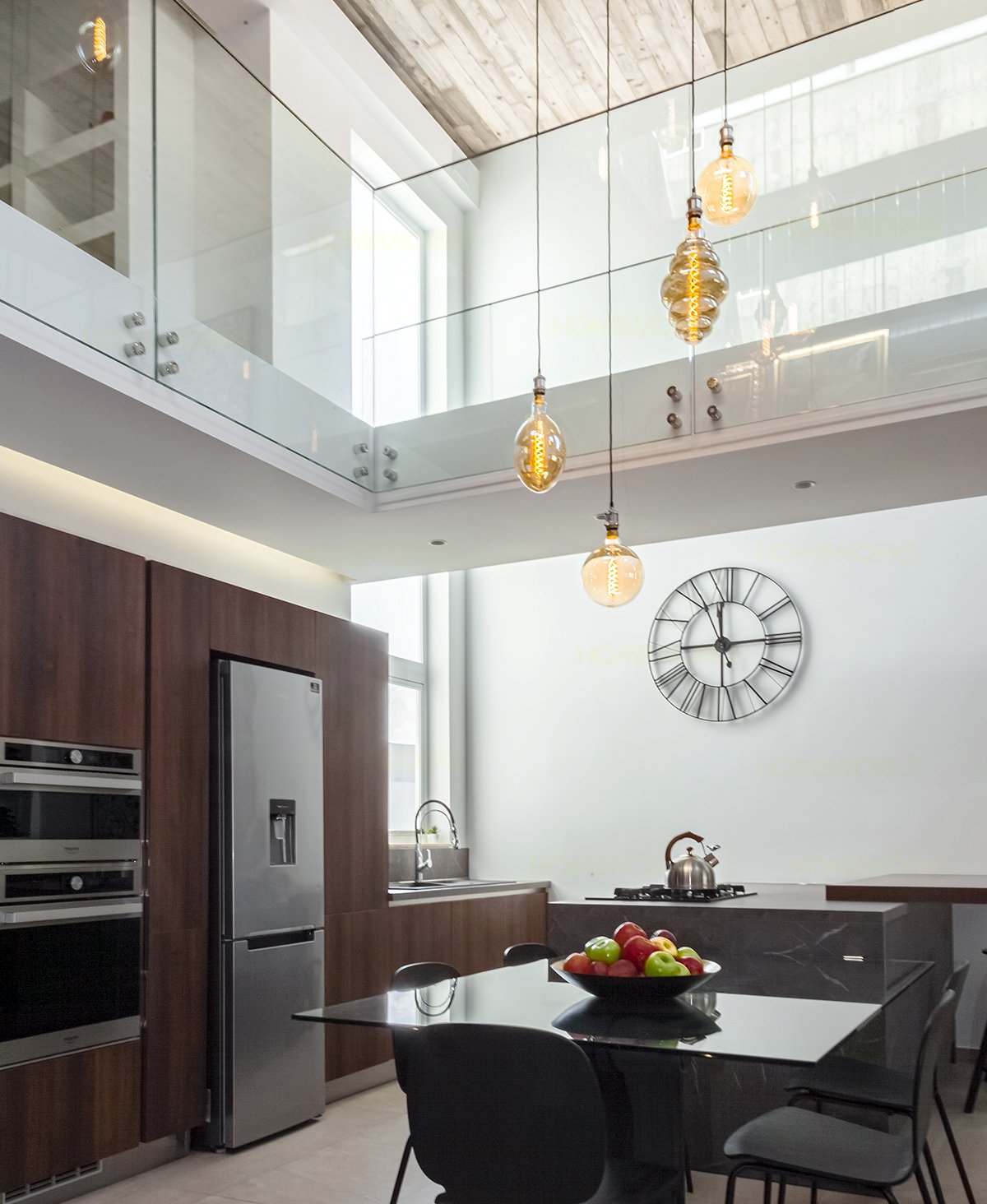 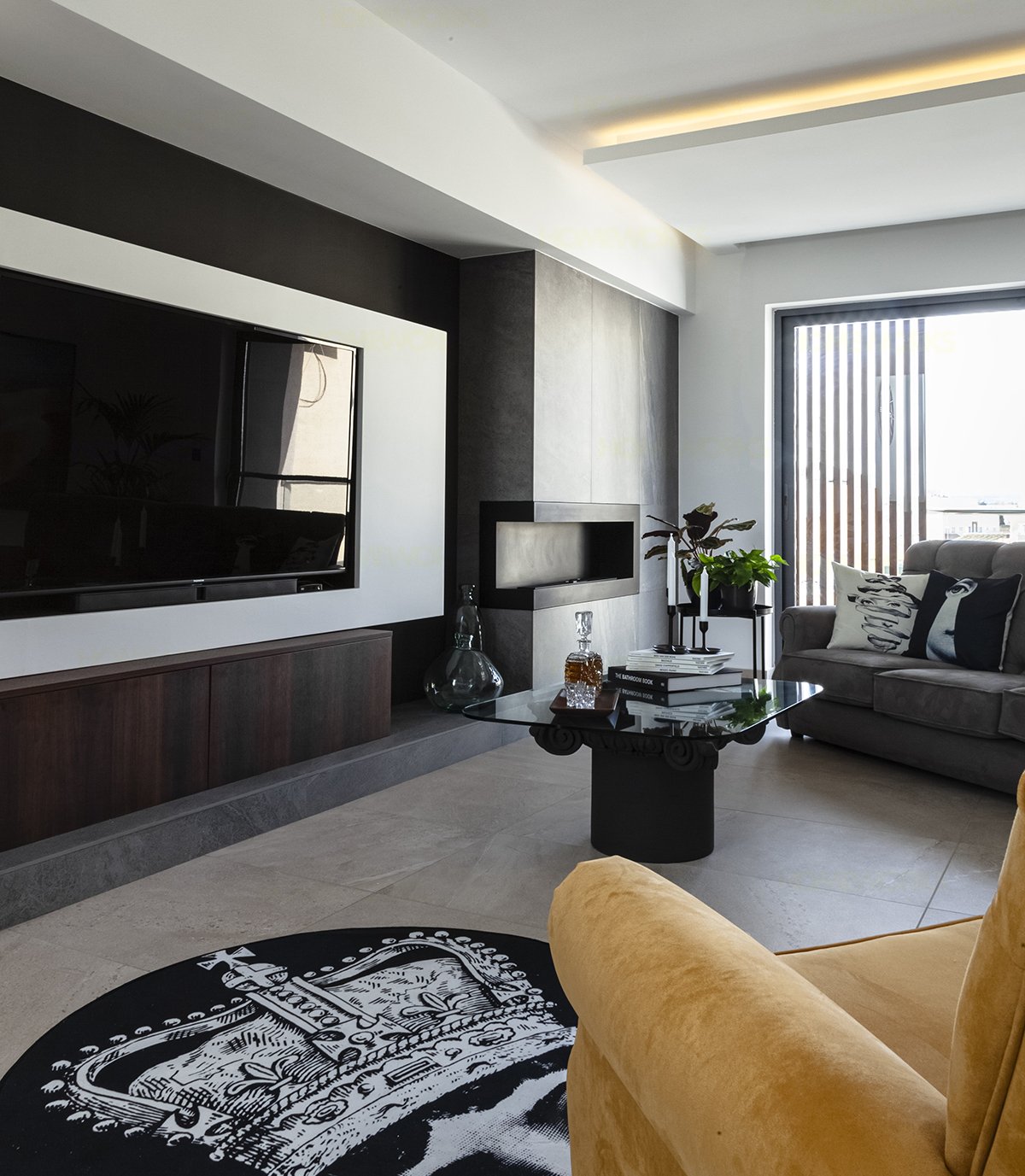 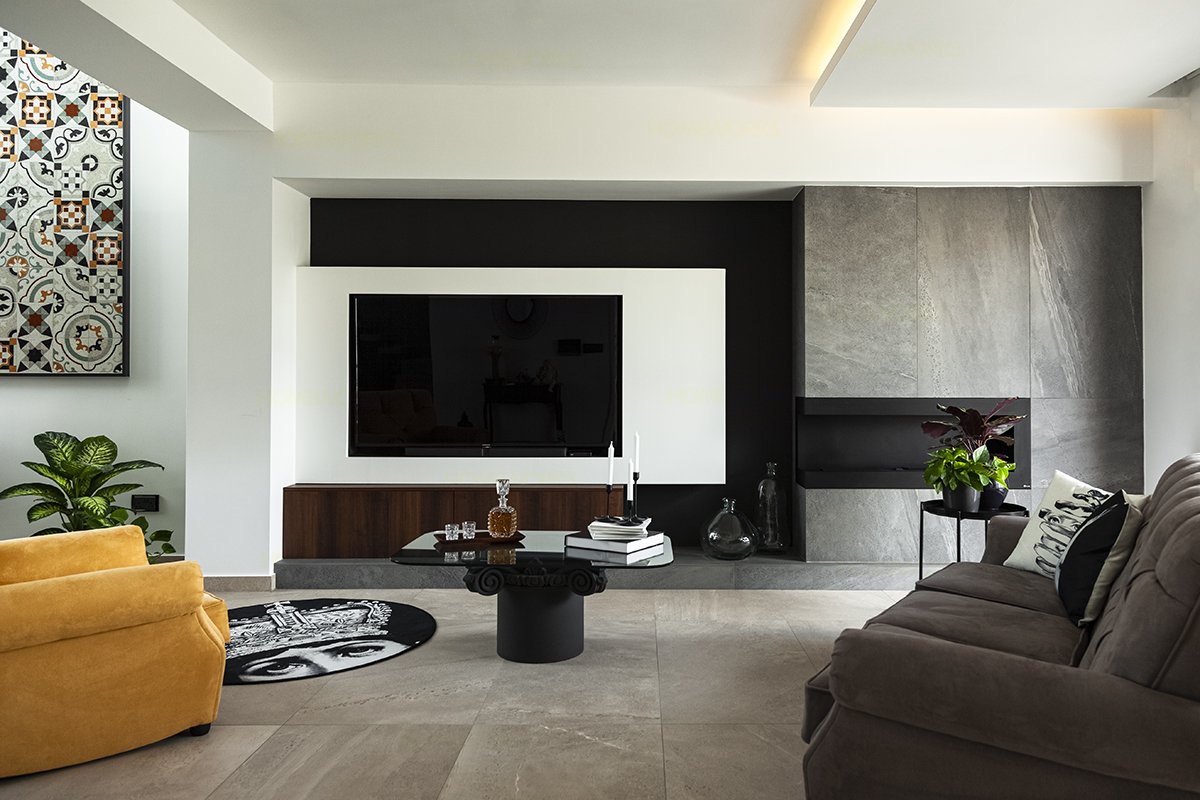 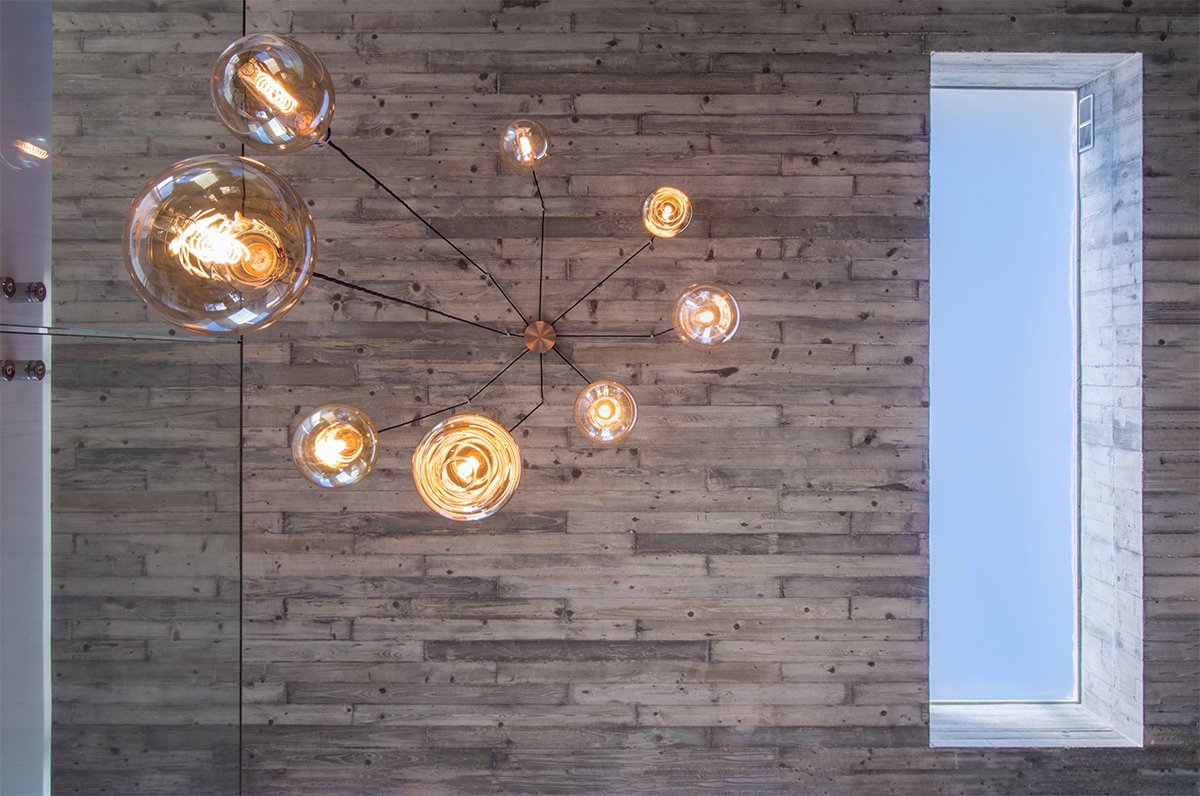 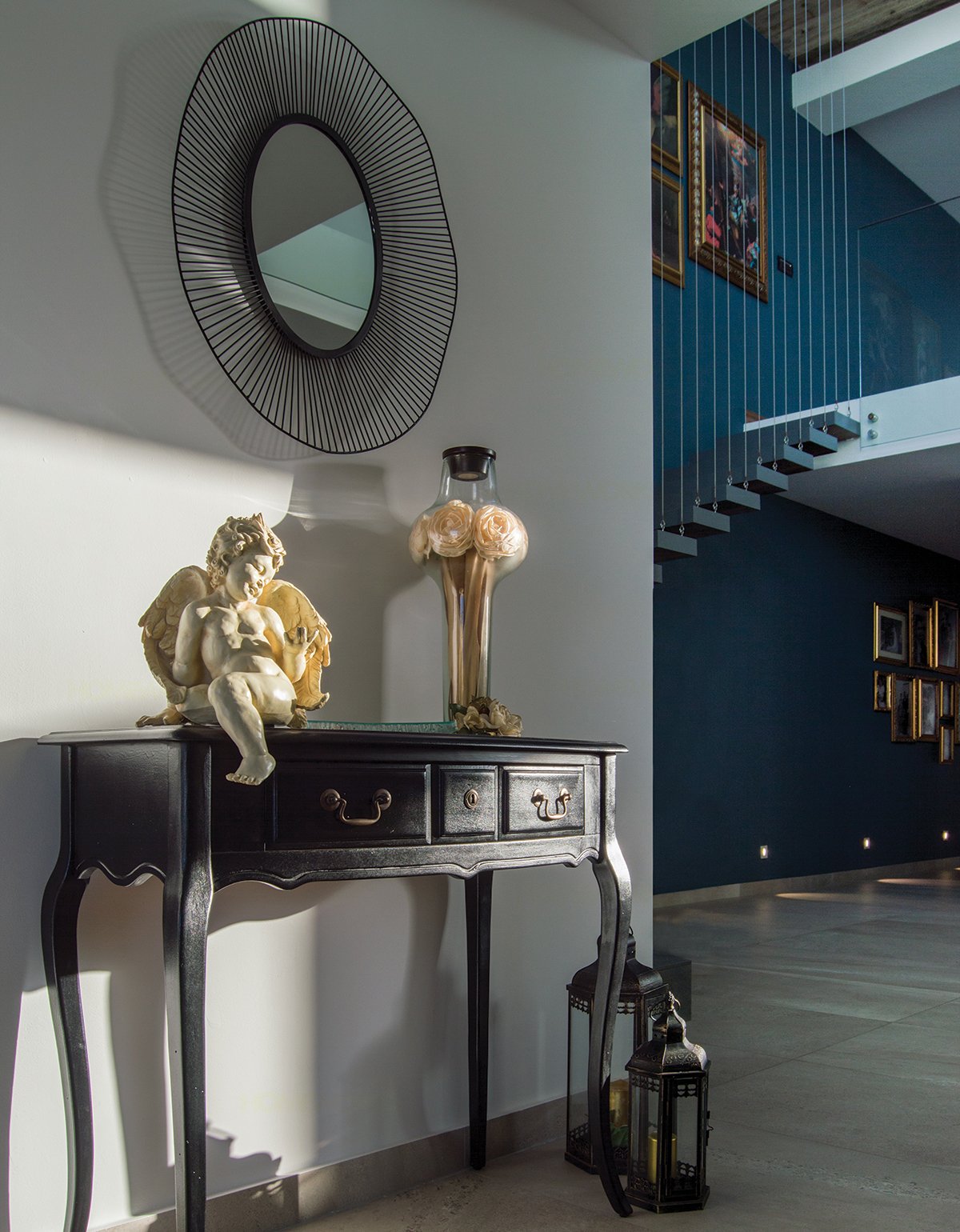 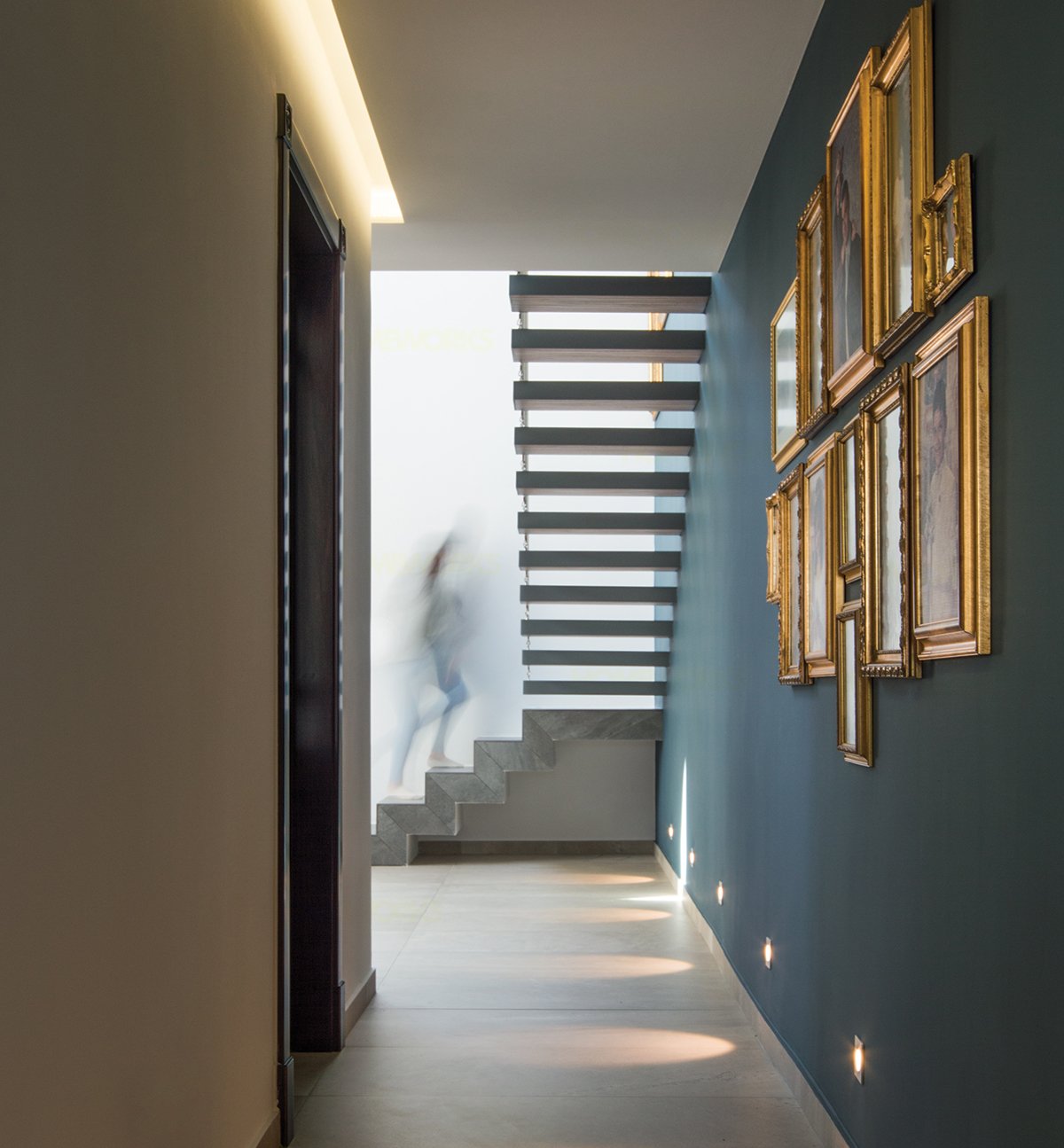 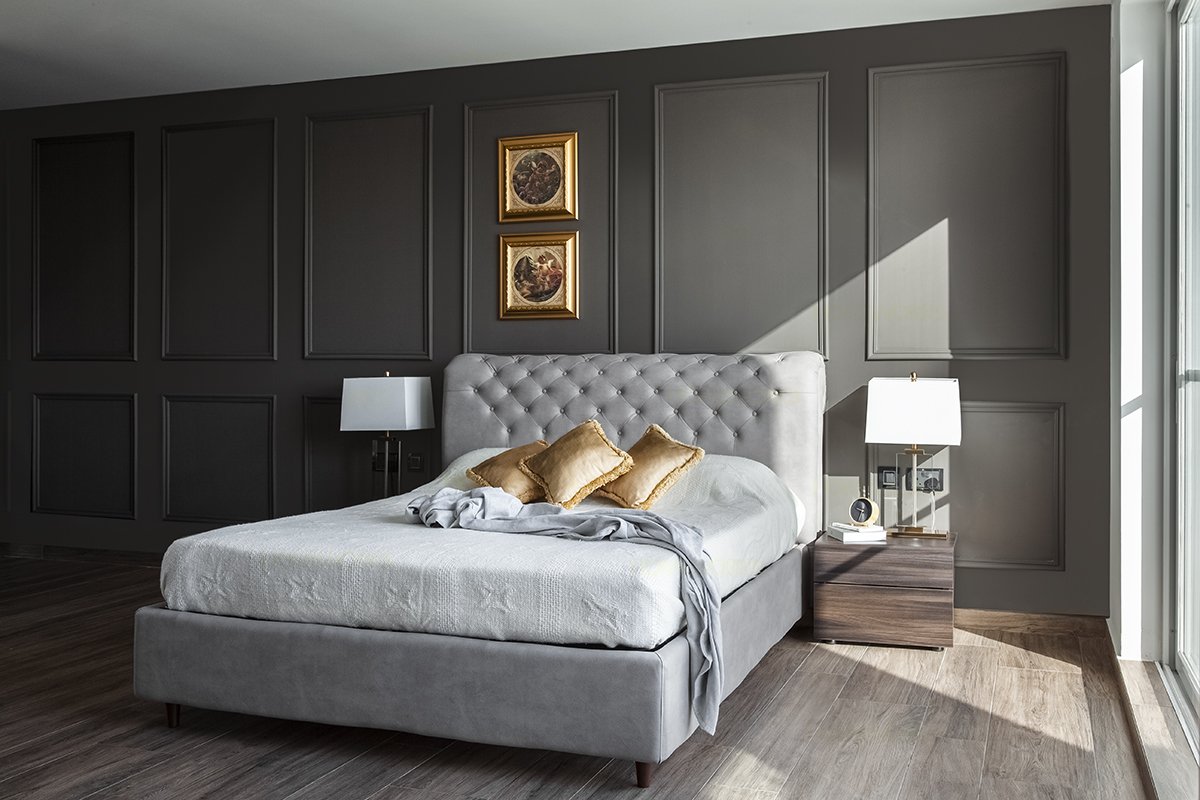 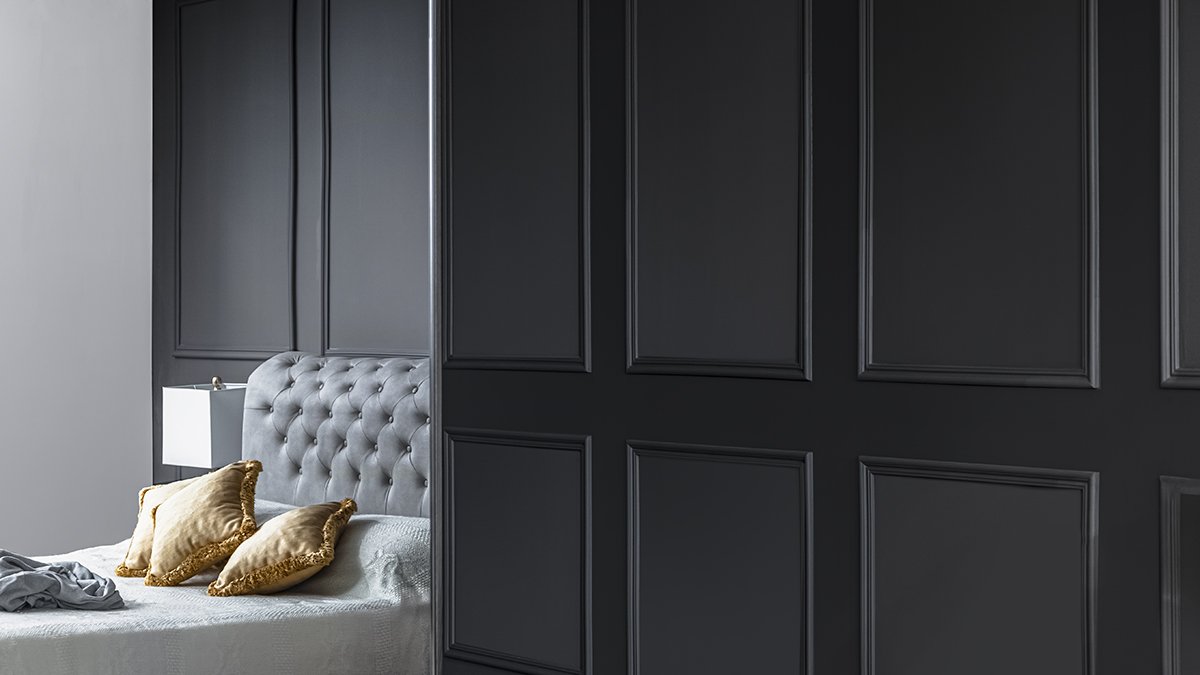 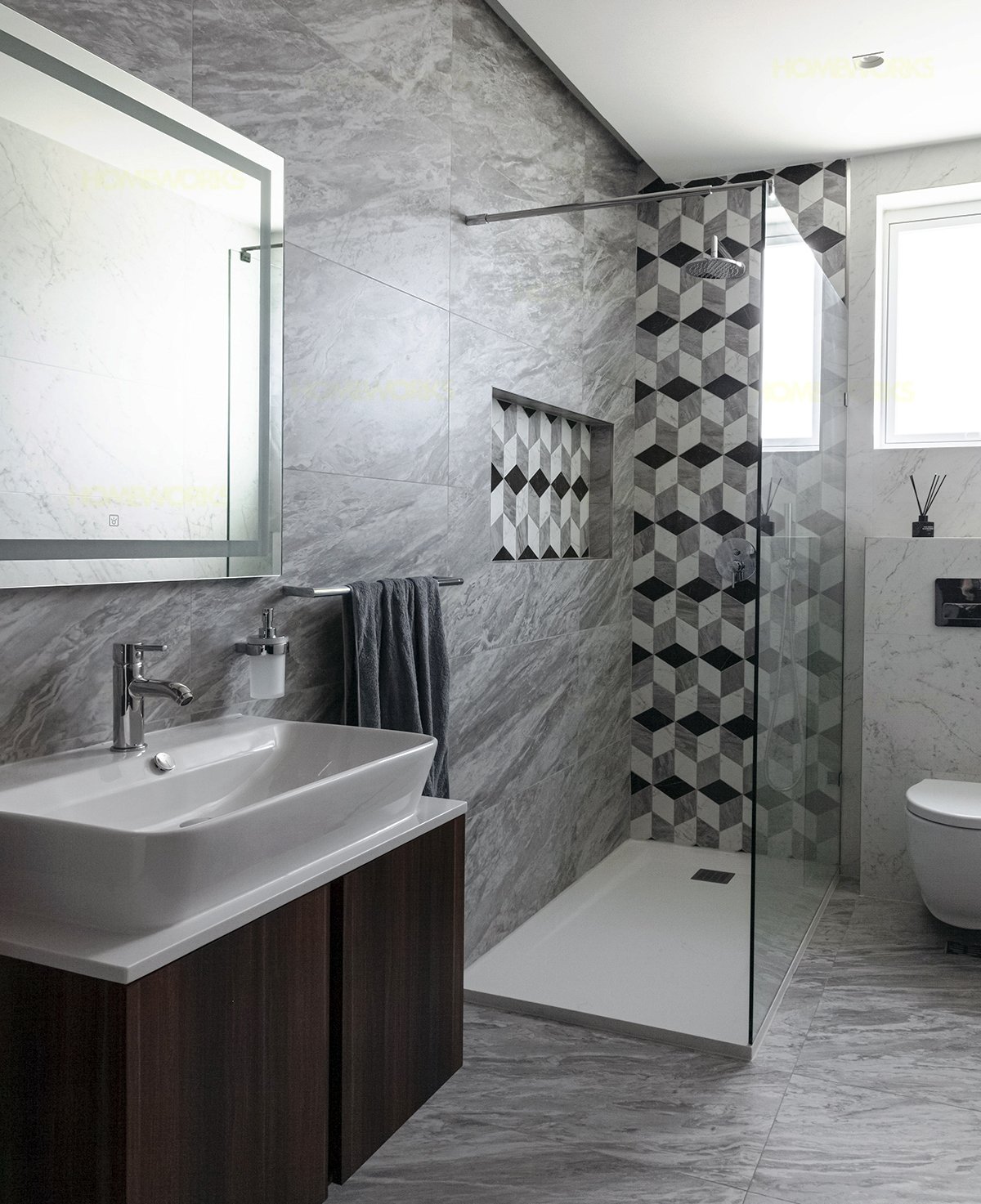