HW Directory
Read back Issues in print
Need inspiration? Browse through our site and create your favourite collections (mood board feature coming soon)
My Mood Boards
My Favourite Articles
My Favourite Rooms
My Trade Directory
© WriteOn Ltd 2003 - 2020, All Rights Reserved 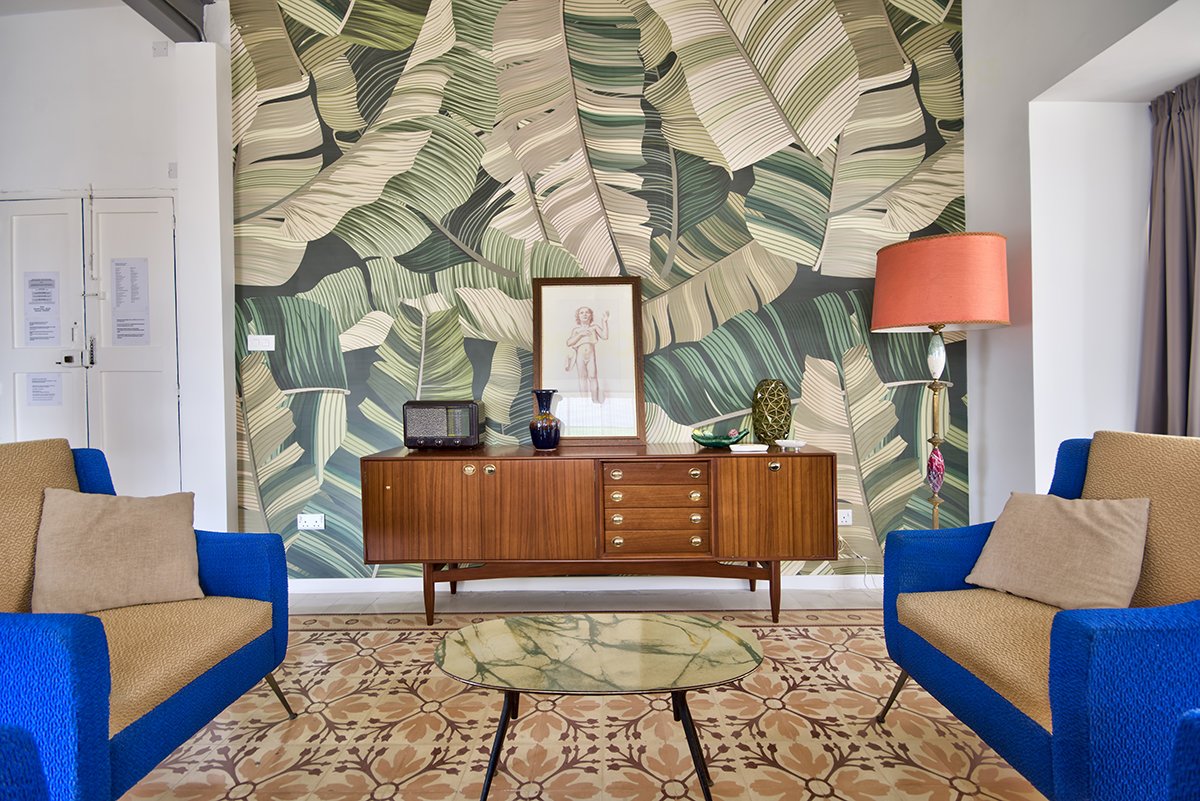 Homeowners Godwin and Dorian first saw this apartment back in 2013. Despite it being in Floriana, which was definitely not a property hotspot at the time (how things have changed!), they liked it, and being a bit of a property fiend, Godwin was keen to acquire it. But it was not to be. With Godwin having recently moved from Gozo and Dorian having returned from Europe, and having just bought a home
together, there were not the funds to buy again.
Fast forward three years, and the apartment was still for sale. A friend was property-hunting so Godwin and Dorian suggested he look at this flat. But while the friend decided he preferred a house,
Godwin and Dorian, having seen the apartment again, were smitten. ‘It was the start of a love affair,’ says Godwin. ‘We loved the high ceilings, the floor, the abundant light, the apartment’s comfortable feeling.’
Despite its shabby condition, Godwin could see the potential the moment he stepped through the door. ‘Standing there I could picture what needed to be done, which walls to pull down, where to put the kitchen, the bedroom…’
During this second viewing, Godwin went up to the roof. ‘And I found myself on the highest point of Floriana, able to see the Three Cities and as far as Siggiewi, Mdina and Naxxar,’ he says. Everything about the apartment was perfect and in a better financial position this time to last, a deal was struck.
When he began measuring, Godwin realised that the apartment had been built to exact specifications. ‘The measurements kept repeating themselves: from one room to the next, or they were the fractions of a larger measurement; even doors and apertures were not spared the equation, everything was in whole, half, thirds or fourths,’ he explains. ‘I think it’s this that gives the apartment its feeling of comfort.’
Godwin demolished one wall to create an open-plan main living area, and also the walls to the two closed balconies in the living room and bedroom to create extra space and to bring in yet more light. The apartment and roof space were linked with an internal metal spiral stairs.
When it came to furnishing it, Godwin made a pledge that he would not decorate the apartment with new, shop-bought furniture and accessories. A self-confessed interiors magpie, the apartment reflects his eye for beautiful things that other people don’t want, especially those from the 1950s/60s. ‘We are a nation obsessed with the Baroque and the old,’ he says. ‘The more recent styles are not as appreciated as they should be. I salvage what people throw away. I walk the streets looking for things people take out for bulky refuse, or I buy from house sales and street markets, both locally and away. Everything in this place has a history and when I look at an object, it reminds me of the story behind it.’
People selling items online are also rich pickings. The beautiful metallic blue sofa and armchairs were bought second-hand, (they were as new, having spent half a century covered in plastic). ‘The sofa set was a gamble given the tiles on the living room floor but I wanted them as soon as I saw them,’ he says.
Their rich colour, combined with the palm leaf wallpaper, show how a bold use of colour and pattern can make a strong design statement. The wallpaper was actually destined for the bedroom, but ‘we felt it was wasted in the bedroom where it would be hidden away,’ says Godwin.
It took almost two and a half years to renovate the apartment, and it was only finished in June this year. Godwin rents it out for short lets but he and Dorian can often be found relaxing on the sofa or on the roof terrace having a bbq with friends. ‘I don’t rent the apartment out for long lets because I want to be able to use it myself,’ he says. ‘We will never sell this apartment; I’ve put so much into it, it is part of me.’

The original Maltese tiles appear as a rug on the floor. The blue of the sofas and the palm leaf wallpaper (online from Murals Wallpaper; muralswallpaper.co.uk) are not an obvious match but the boldness of the colour and pattern do work. ‘We kept the curtains a plain grey so as not to overload the space,’ says Godwin. The sideboard was bought second-hand online. The light is an early 19th century Maltese street light that he rescued and rewired. The lampshade was bulky refuse found two streets away

The original Maltese tiles appear as a rug on the floor. The blue of the sofas and the palm leaf wallpaper (online from Murals Wallpaper; muralswallpaper.co.uk) are not an obvious match but the boldness of the colour and pattern do work. ‘We kept the curtains a plain grey so as not to overload the space,’ says Godwin. The sideboard was bought second-hand online. The light is an early 19th century Maltese street light that he rescued and rewired. The lampshade was bulky refuse found two streets away

Tucked away in the corner is the ‘Tetris kitchen’ that was custom-made by a carpenter. ‘It is over four short walls so it had to be thought through carefully,’ says Godwin. Instead of going for a pale colour he decided to go for a dark wood effect. ‘I couldn’t hide it so I decided to go the other way and make its cubic mass stand out,’ he says

A new staircase, given a shot of style in bright red, leads to the roof terrace and its stupendous views

This room is furnished with an original mahogany leaf set known as ‘tal-fuljetta’. ‘It’s sadly not valued anymore as they are too bulky to fit in today’s small bedrooms,’ says Godwin. The plastic ‘jewel’ lampshades (from Birgu Sunday Market) add a dash of fun

This is the only room where everything is new. ‘We wanted the cleanliness of white tiles but softer so we chose a bevelled smallish tile,’ says Godwin. ‘And because the room is small, we painted the ceiling blue to make it feel less like a white box. The door’s back is a full mirror that also helps make the space feel bigger 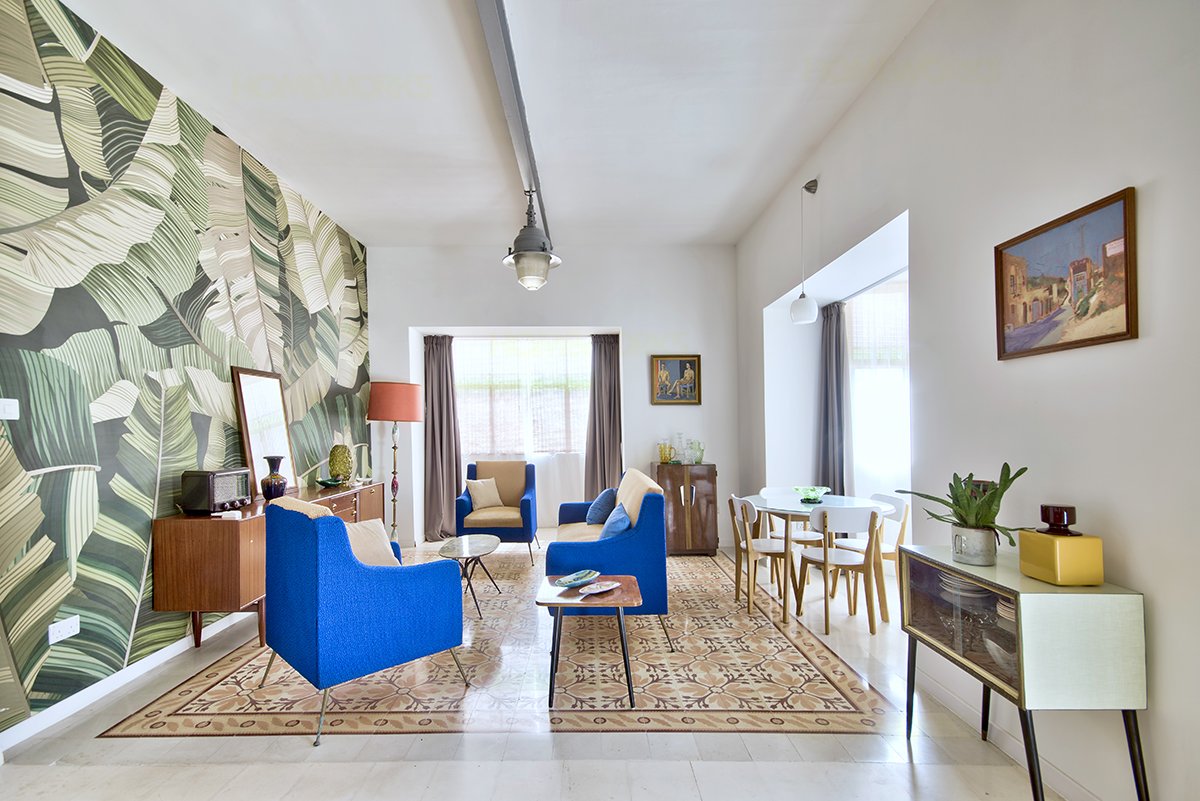 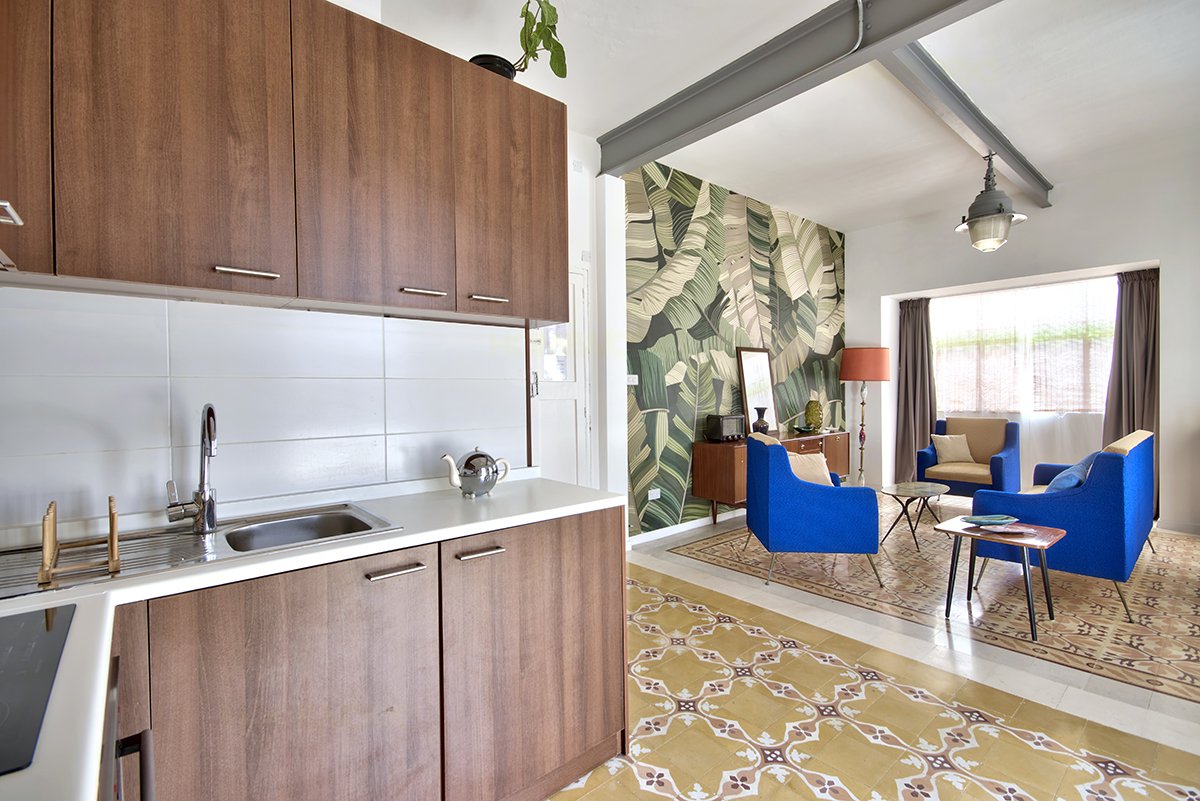 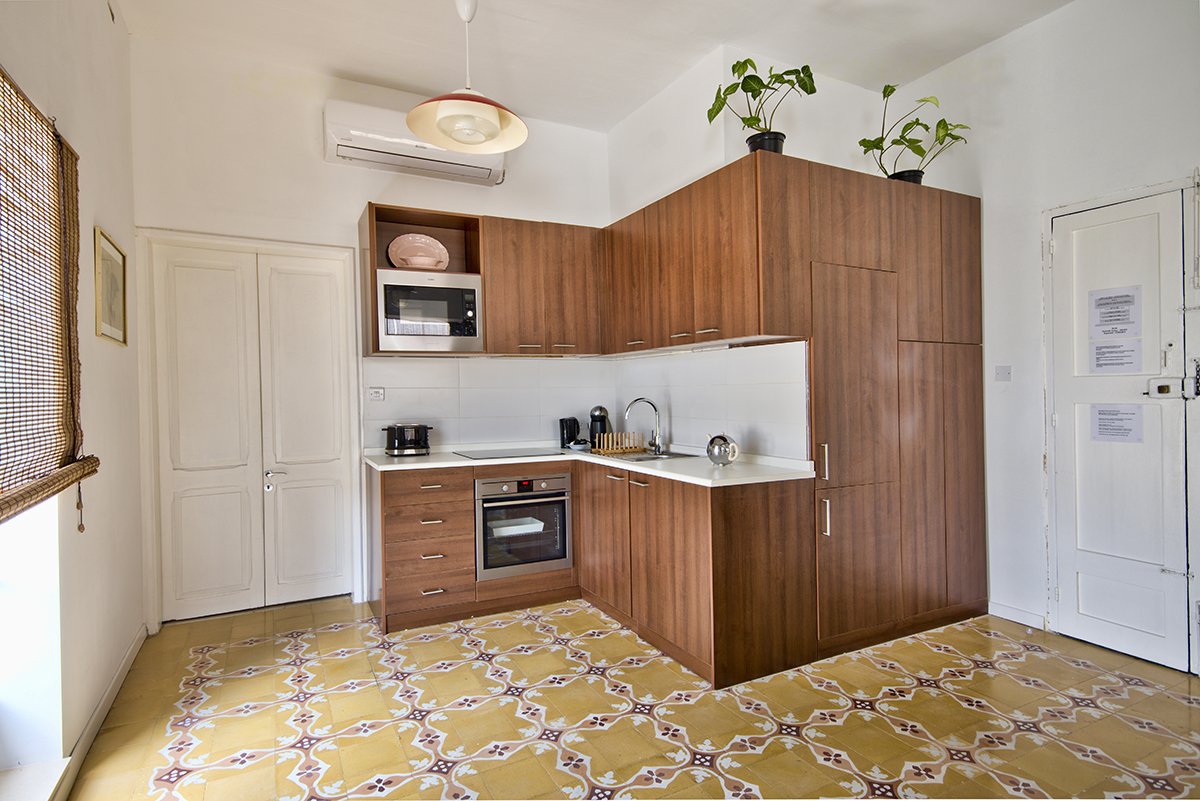 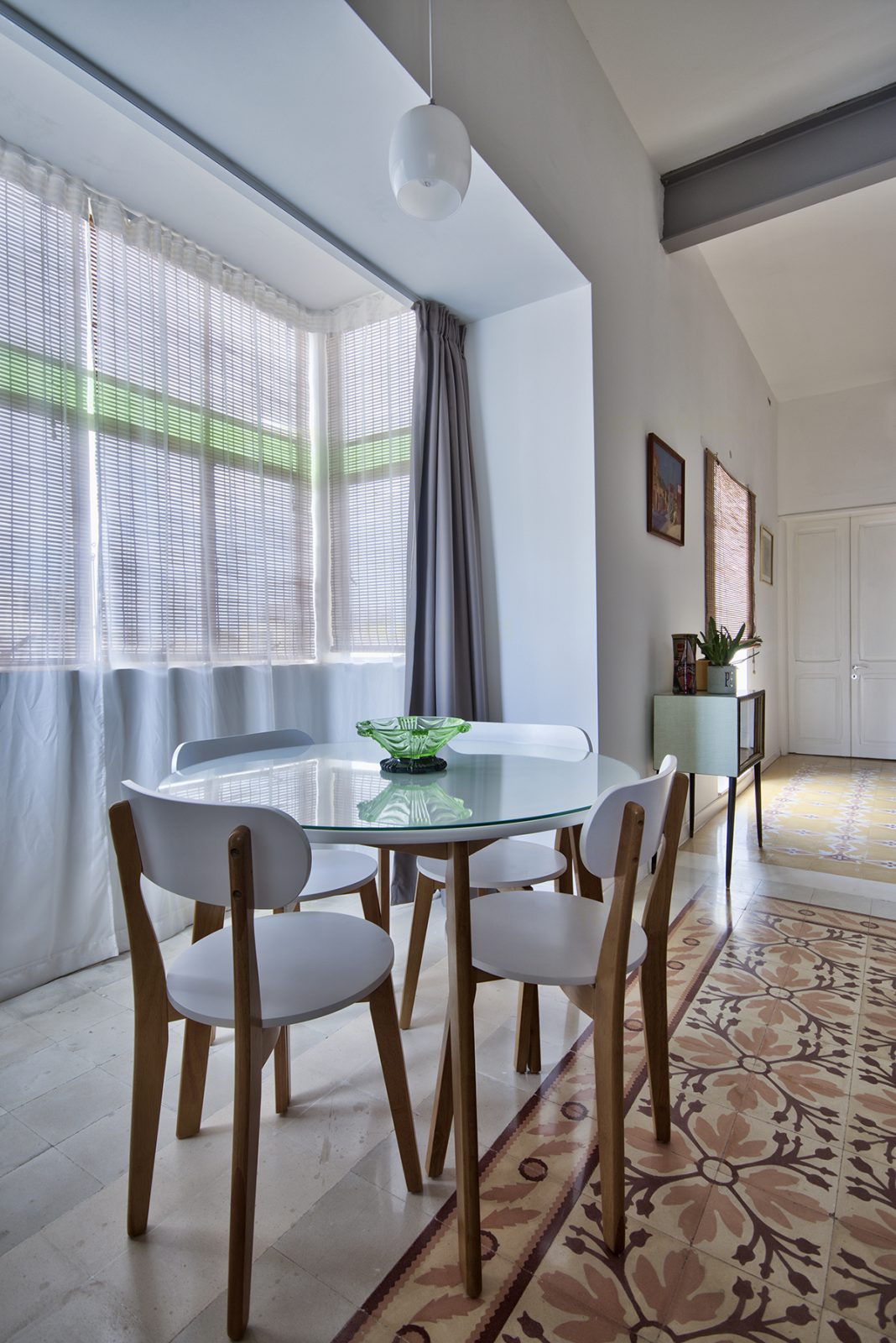 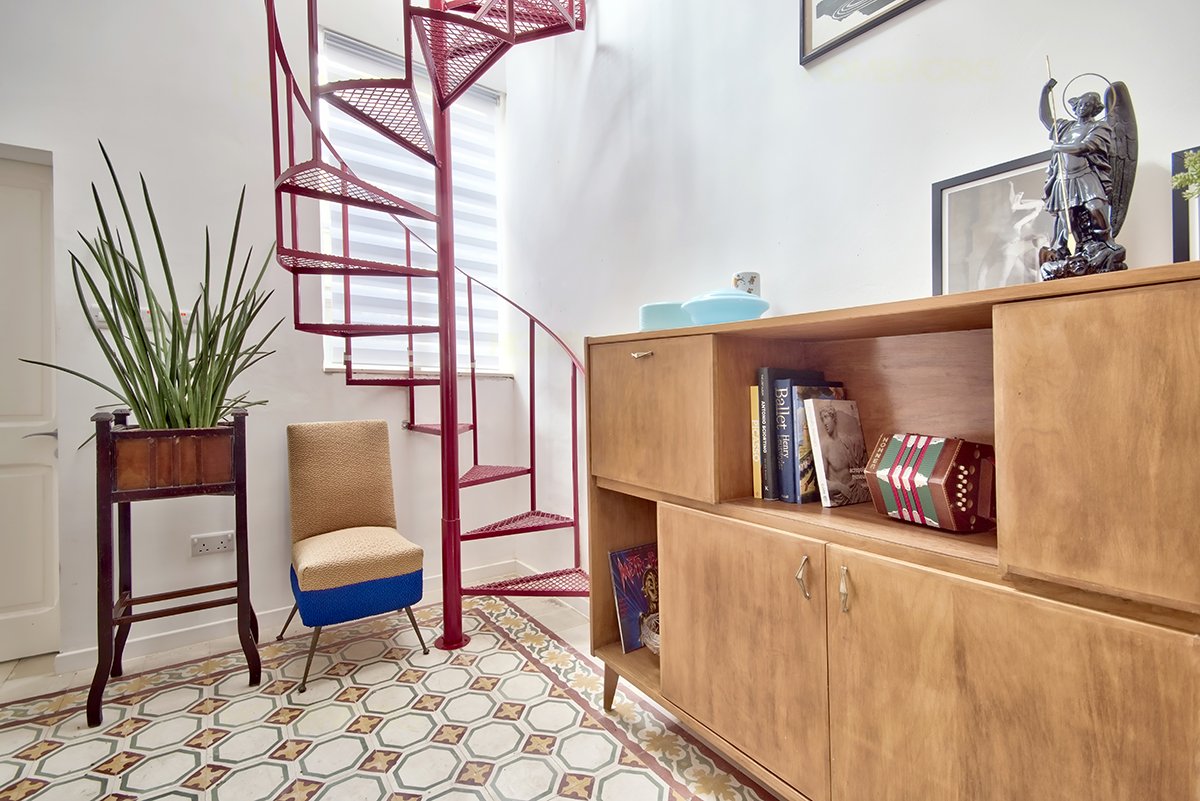 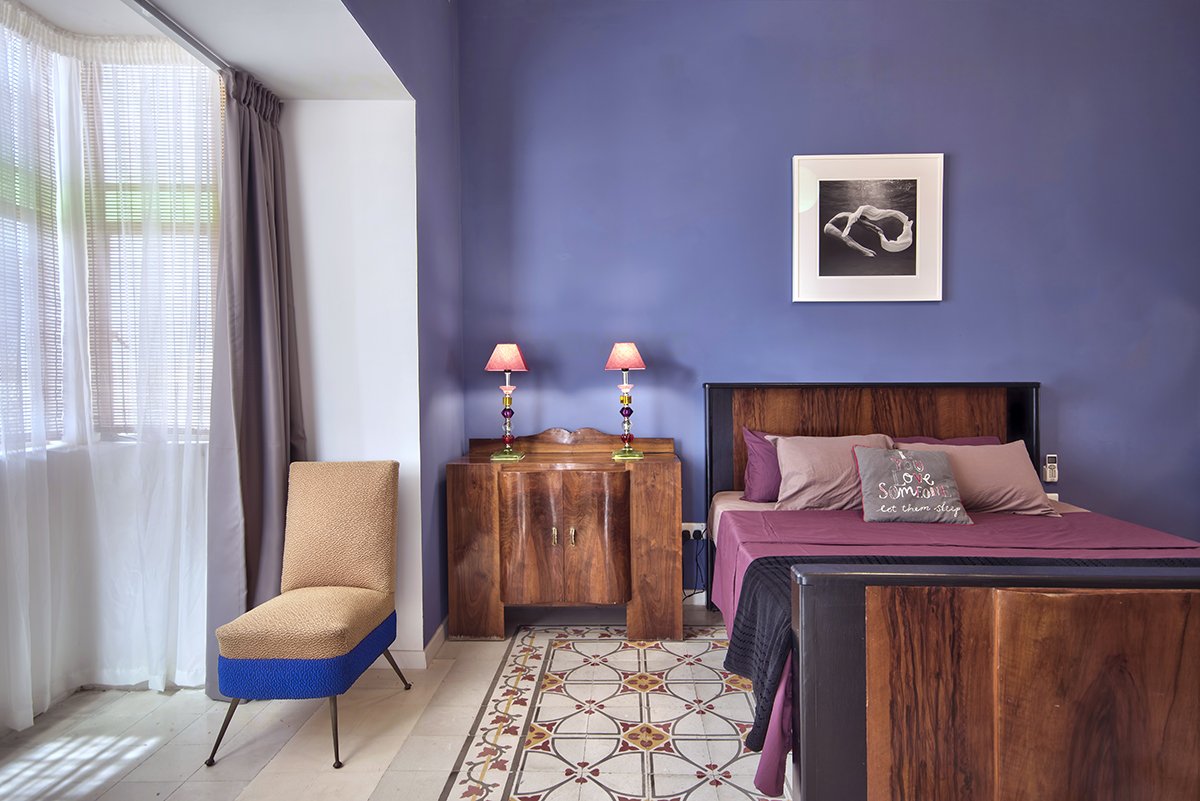 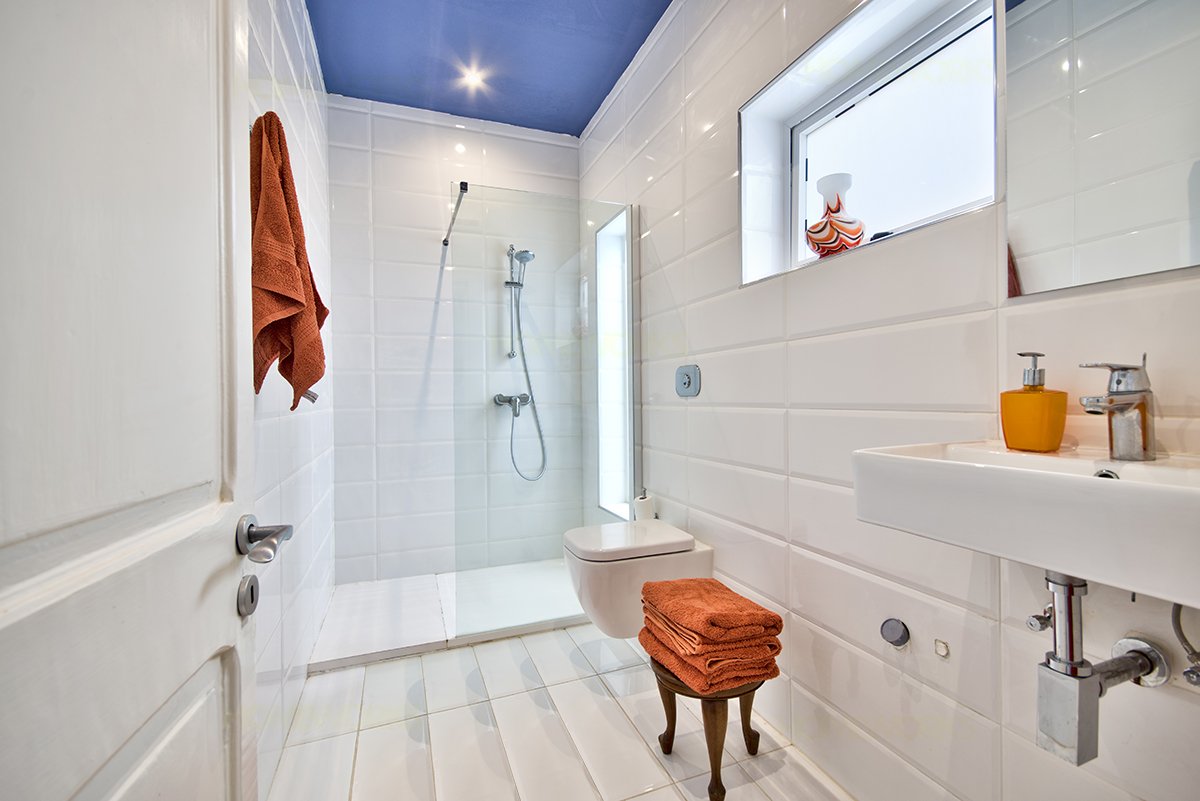