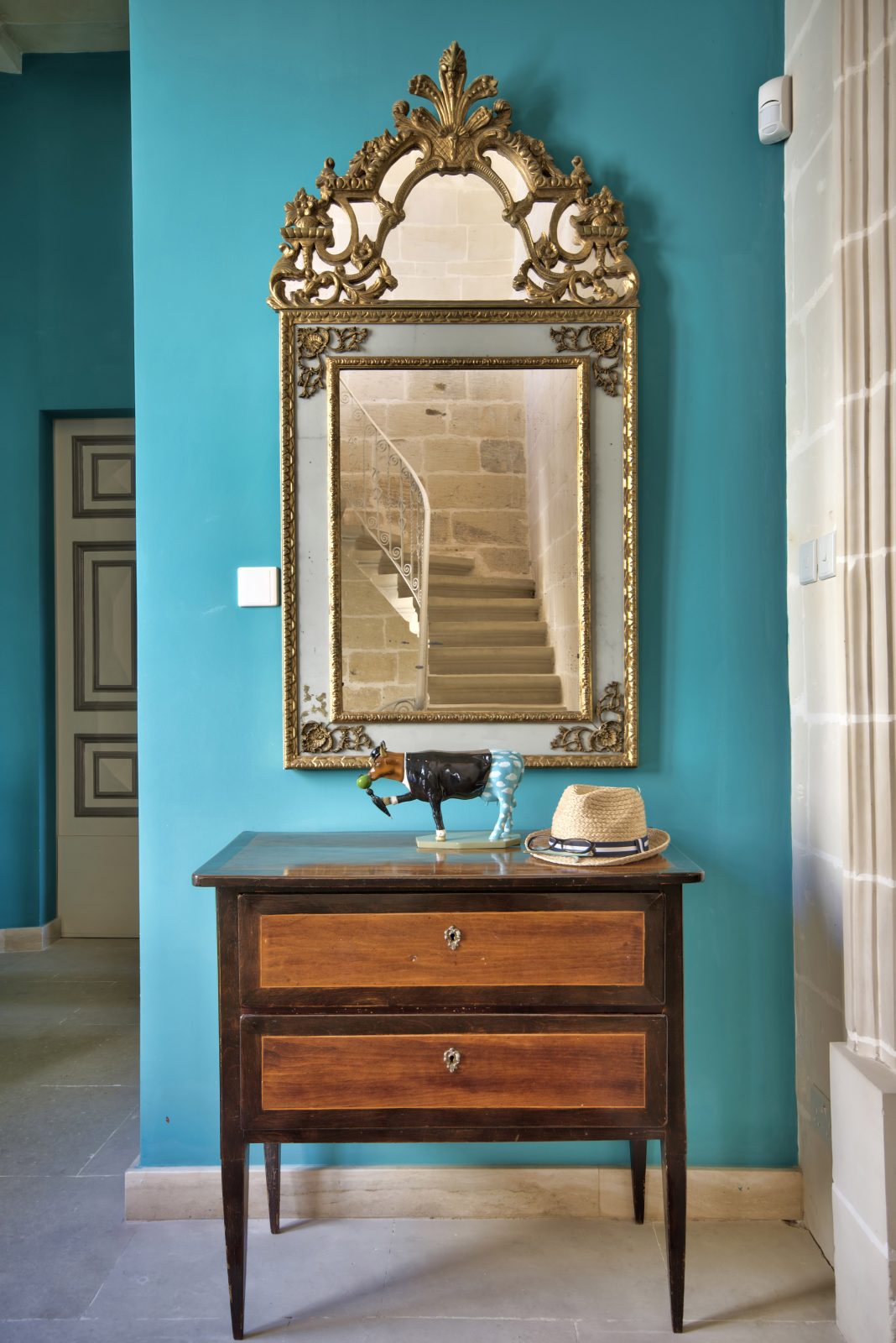 Kate de Cesare is very much a maximalist. Not for her coolness of an all-white space – instead her home in Lija is a decorated in rich colours and patterns with chandeliers, antiques and luxury materials coming together to create a home that is a visual feast. ‘I prefer warmer shades; they make for a cosier feel, and they work well when lifted with gold,’ she says. ‘And my husband and I like antiques, mixing them with quirky and modern pieces to create a look that is interesting and fun, but also comfortable.’
It helps that this three-bedroom house is full of light which allows the colour palette to sing, rather than the colours absorbing all the light making a too-dark space. It was the light, and the original staircase with large steps and wrought iron balustrade leading to the top of the house that made Kate and husband, Andrea chose this 18th-century house for themselves and their two young daughters. ‘We liked its location, on one side of the village’s the prettiest streets,’ says Kate.
The house has been uninhabited for many years, and it took them two years to complete its renovation. ‘It’s a well-built house, but we had to gut it completely and start again with new wiring and plumbing, and we were careful with how we did it – the wires don’t cut through the stone but through the mortar joints,’ she says.
The layout was done with the help of designer Michael Trapani Galea. On the ground floor, they brought down walls to create a more open-plan space which made it more compatible with modern living. ‘With two small kids, it allowed us to be all together even if we were in different areas downstairs,’ says Kate.
Removing the flooring at the front of the house revealed a surprise. ‘We discovered that our cellar had lovely original arches hidden by a concrete ceiling. It also had access to the war shelters and a tunnel that went past all our neighbours – we’ve now closed it off – that leads all the way to the church,’ says Kate.
The couple were painstaking in their endeavours. The original flagstones in the bathroom and hallway were lifted and numbered and then re-laid after all the plumbing was carried out. In the kitchen, layers of wall were removed to give more space for the kitchen units from Fino. ‘Throughout the process, we gave ourselves extra tasks, but we just wanted to do the best we could,’ says Kate. And it shows.

An ultra-marine blue is the perfect foil for an antique French mirror and chest of drawers.

Aubergine on the walls give this space a decadent feel, especially teamed with the two-tone curtains, from camilleriparismode, the gold detailing on the door and velvet chair.

A contemporary fireplace & shelving unit is juxtaposed by traditional furniture and accessories for a room that feels luxurious thanks to the vibrant colours, lavish silk curtains and warmth of the furniture. 'We originally had this as a formal sitting room, but we rarely used it,' says Kate. 'Now it is partially open-plan to the hallway, and it's become a real communal space.'

Filled with plants, the courtyard has a fresh feel. After eight years here, in the house, the family are selling this house and moving to a home that the couple have been renovating for the past four years.

Kate was keen that the functional rooms felt more like the rooms in the rest of the house. 'The units, from Fino, and the marble are both quite subtle,' says Kate.

Kate was keen that the functional rooms felt more like the rooms in the rest of the house. 'The units, from Fino, and the marble are both quite subtle,' says Kate.

On one wall is Nina Campbell wallpaper and a chandelier adds a glamorous touch.

The room where the family relax. A large corner sofa gives plenty of space for lounging. Above it, the colours of an abstract artwork, painted by Kate, tie in which the burnt orange chair.

The original staircase that drew Kate and her husband to the house.

With high ceilings, Kate needed something to hold the space, hence the enormous headboard which was suggested by camilleriparismode. 'It's crazy but it works really well!' She says. The enormous chandelier also helps fill the space. The room is painted a dark blue. 'The colour makes for a more intimate setting.'she says.

Not used for sitting in, but for bringing in fresh air and sounds of street life.

A luxurious room thanks not just to the travertine which is in two different colours but also the enormous copper bath from Catchpole and Ryle in England.

'We travelled to Kent to see if we liked it,' says Kate. 'It had to be earthed so that running water with copper wouldn't electrocute us, but it's wonderful. We can float in it.' 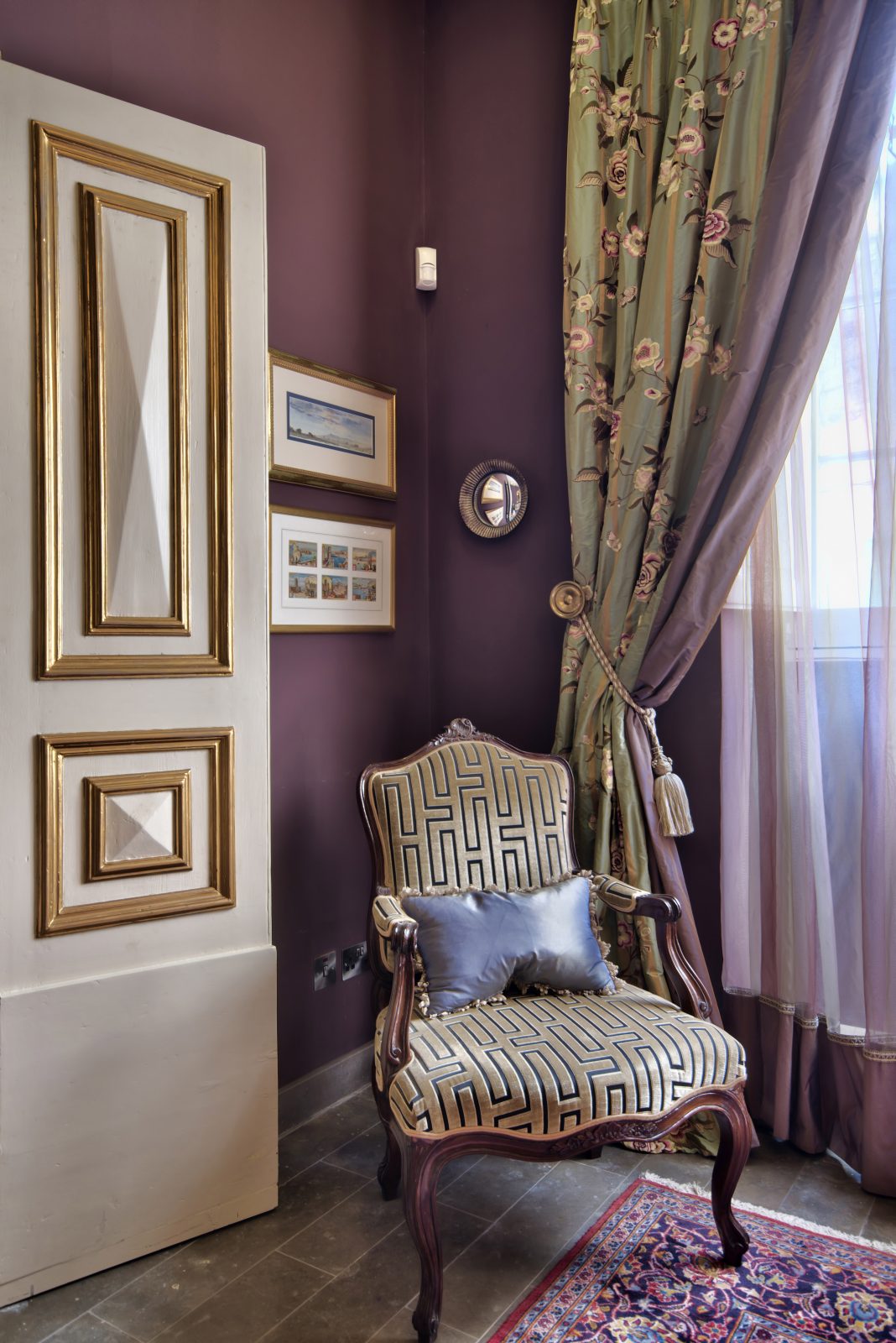 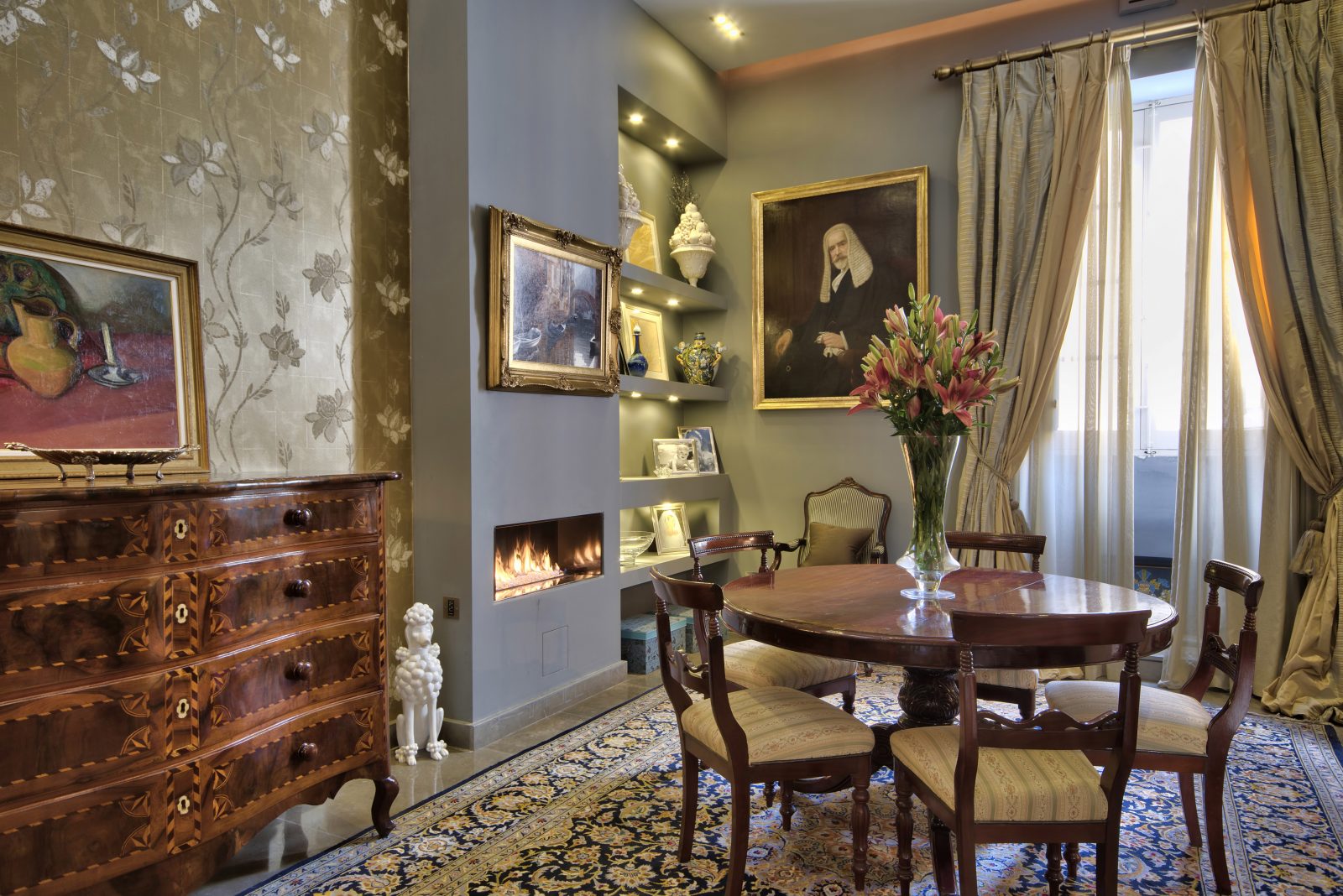 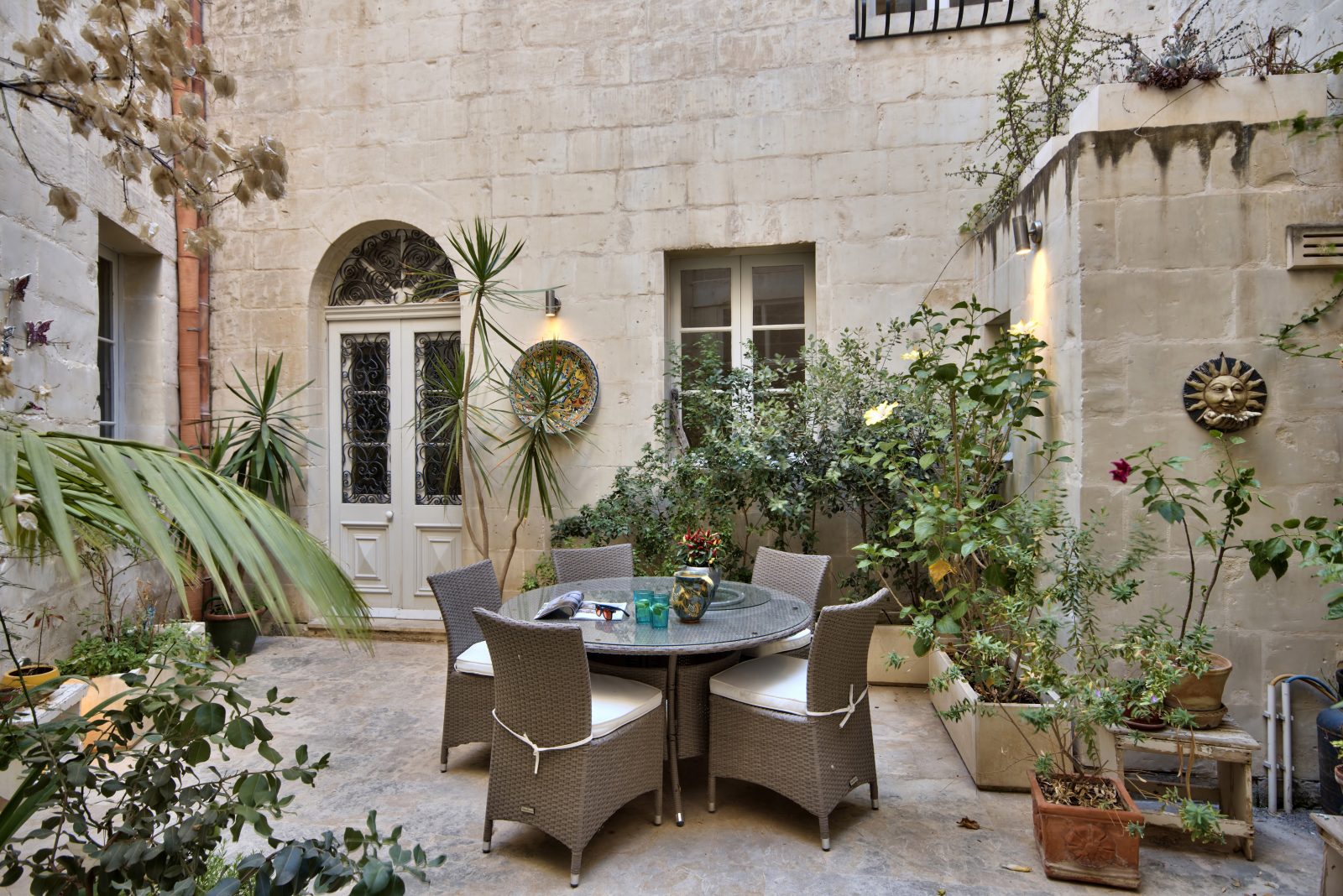 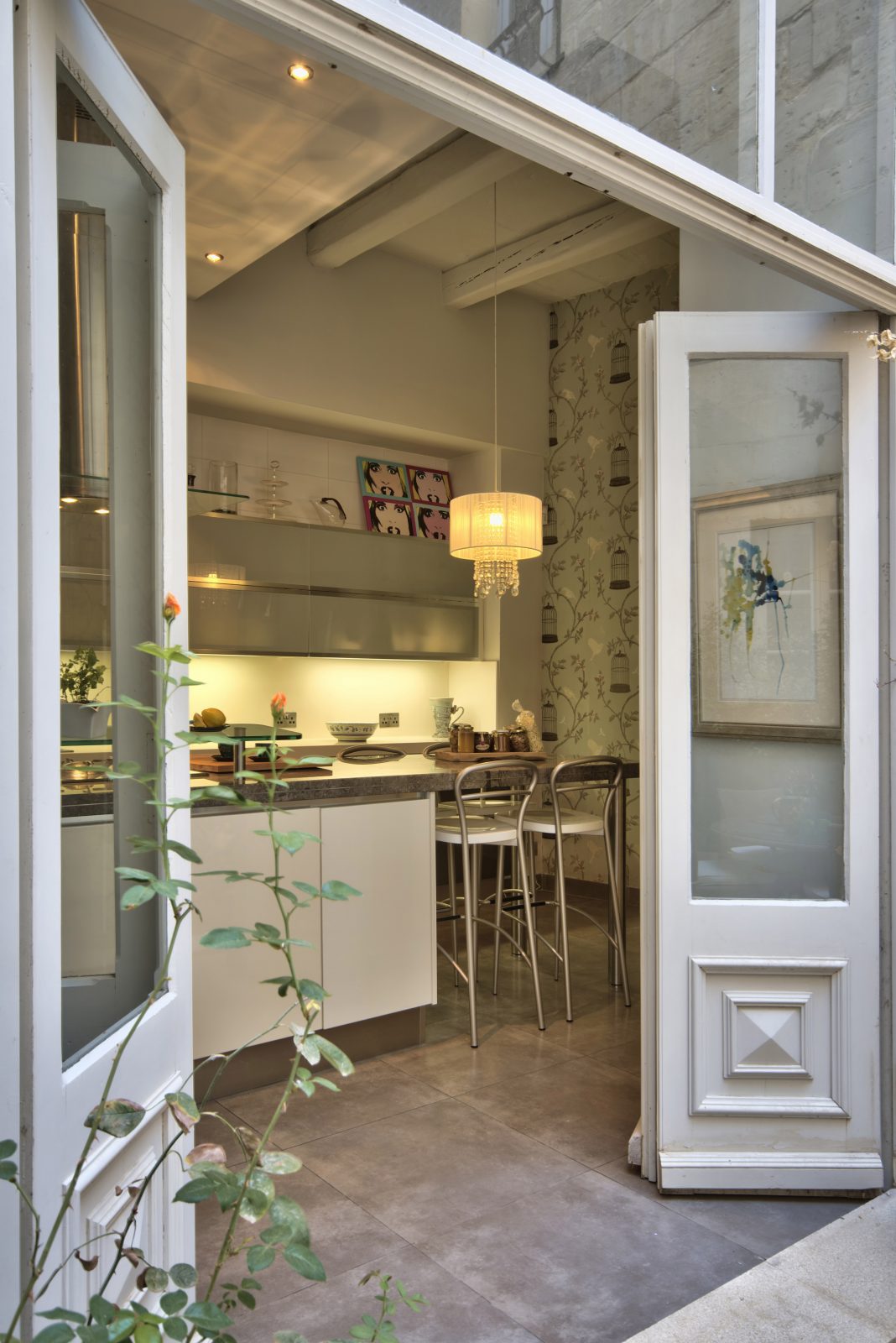 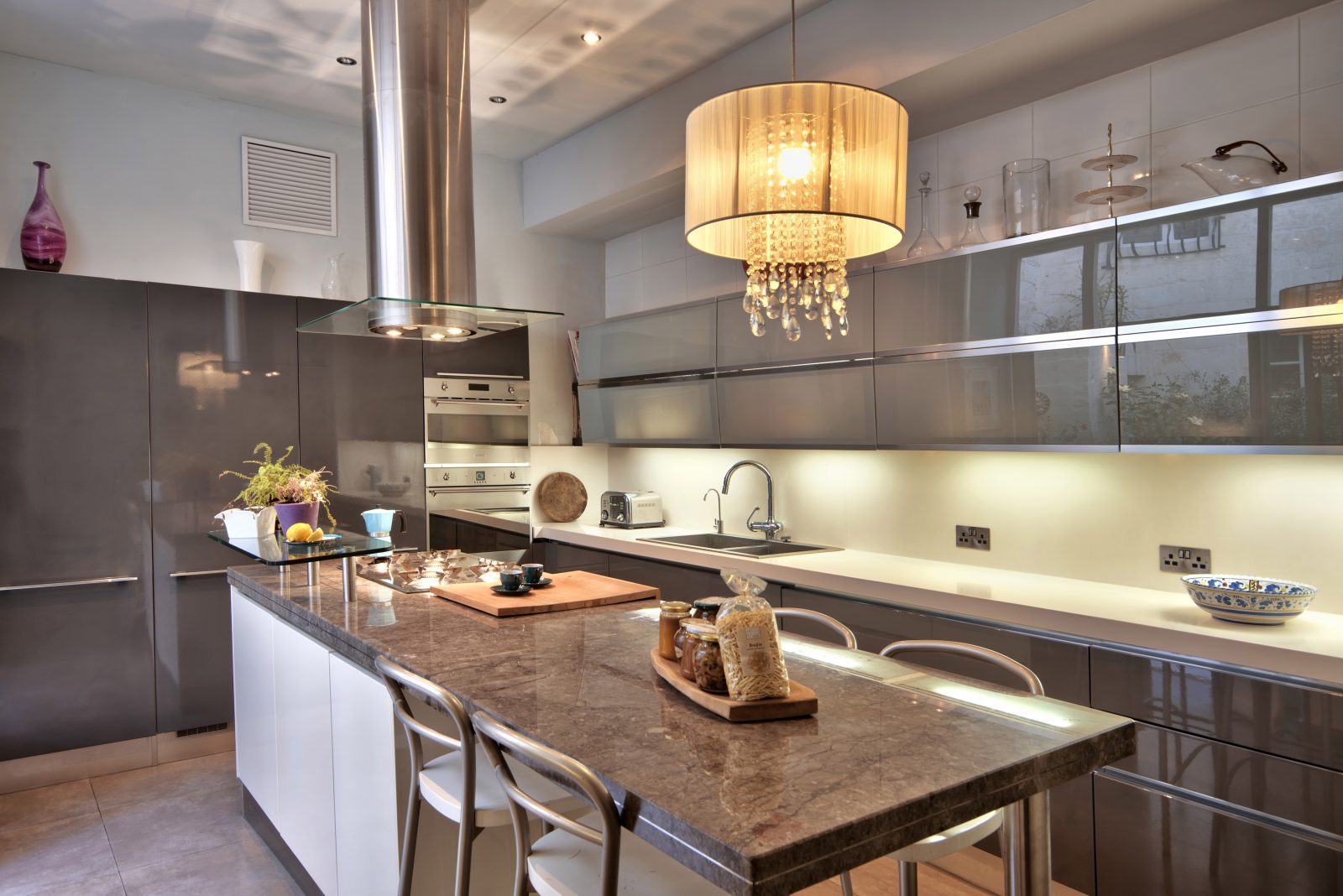 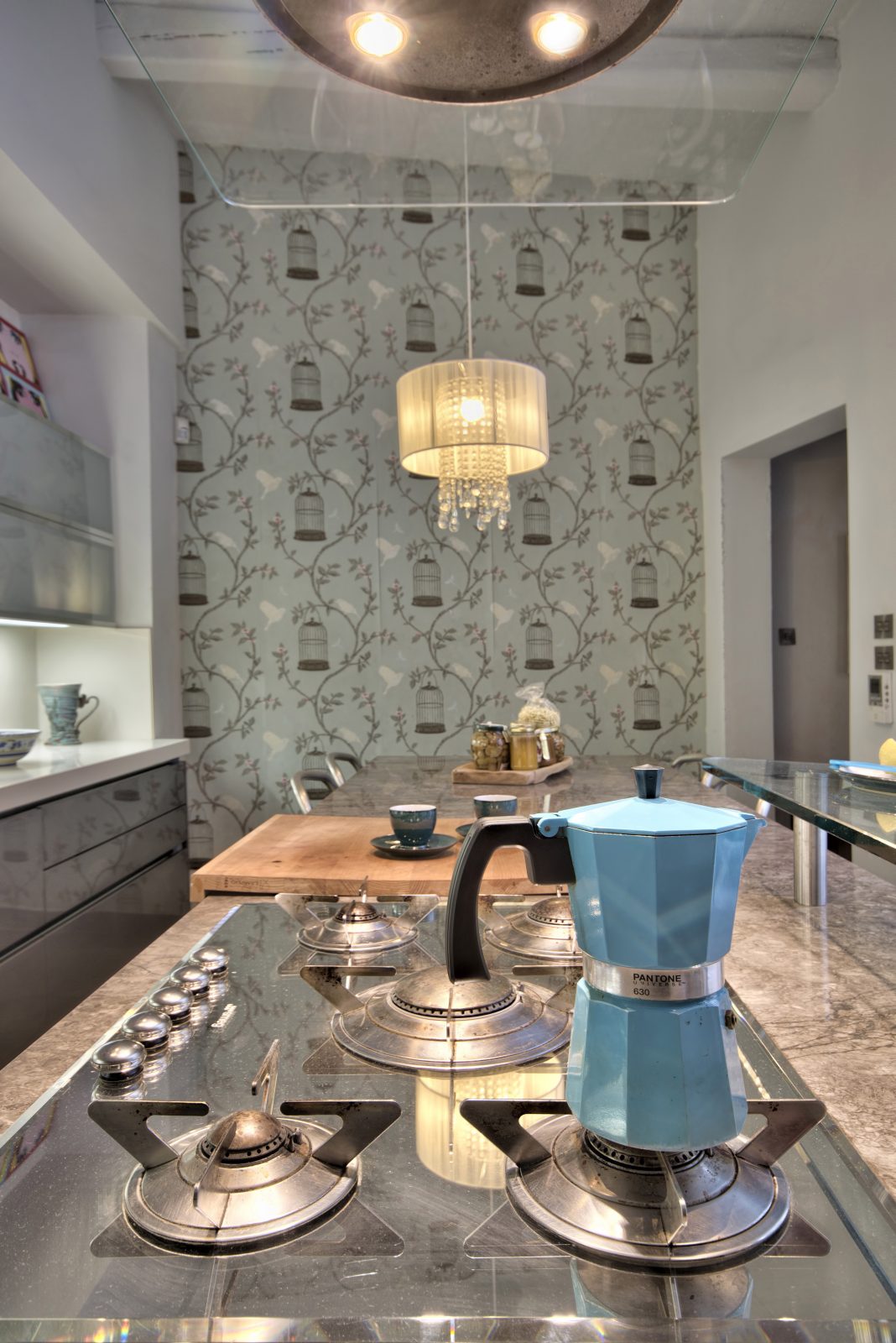 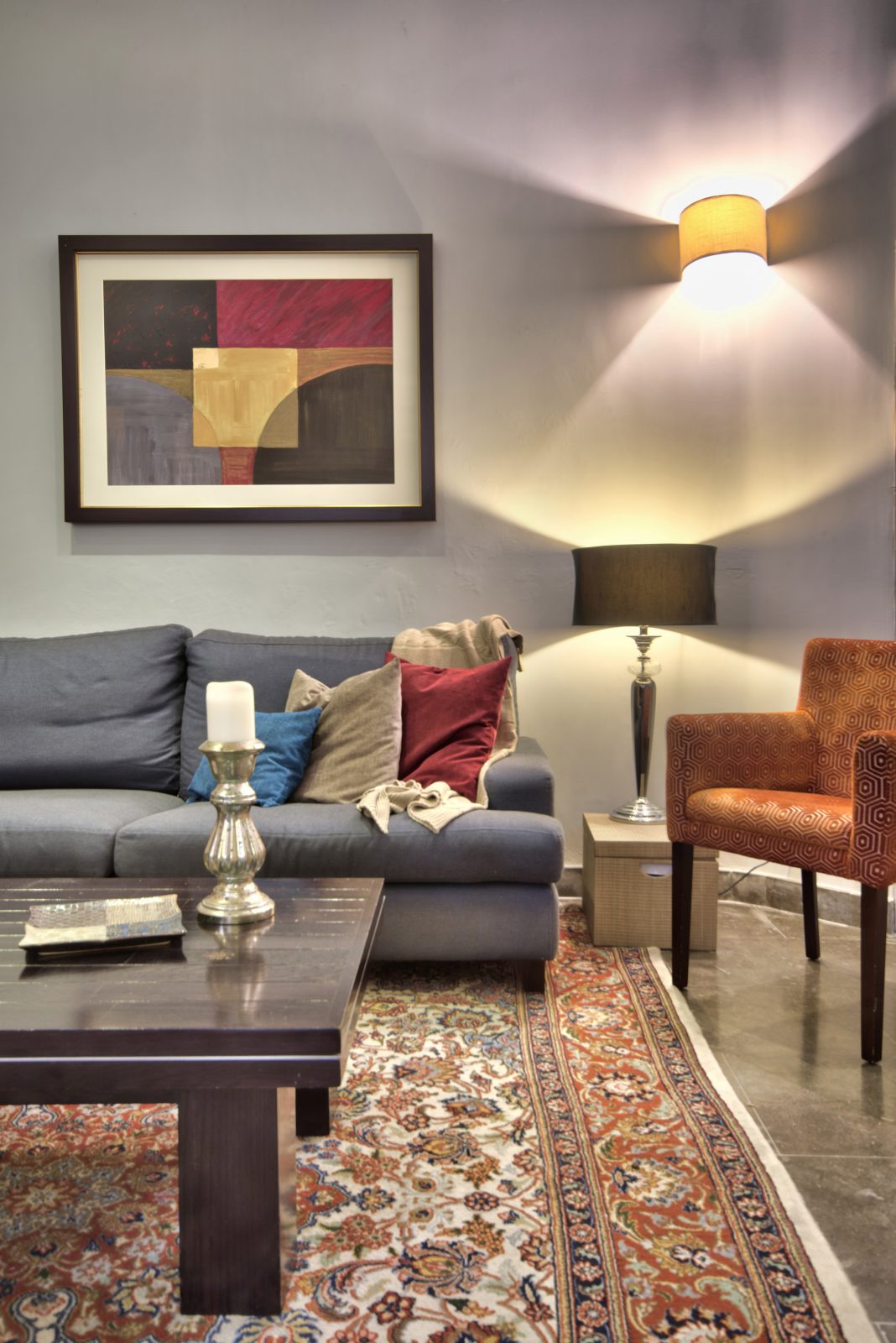 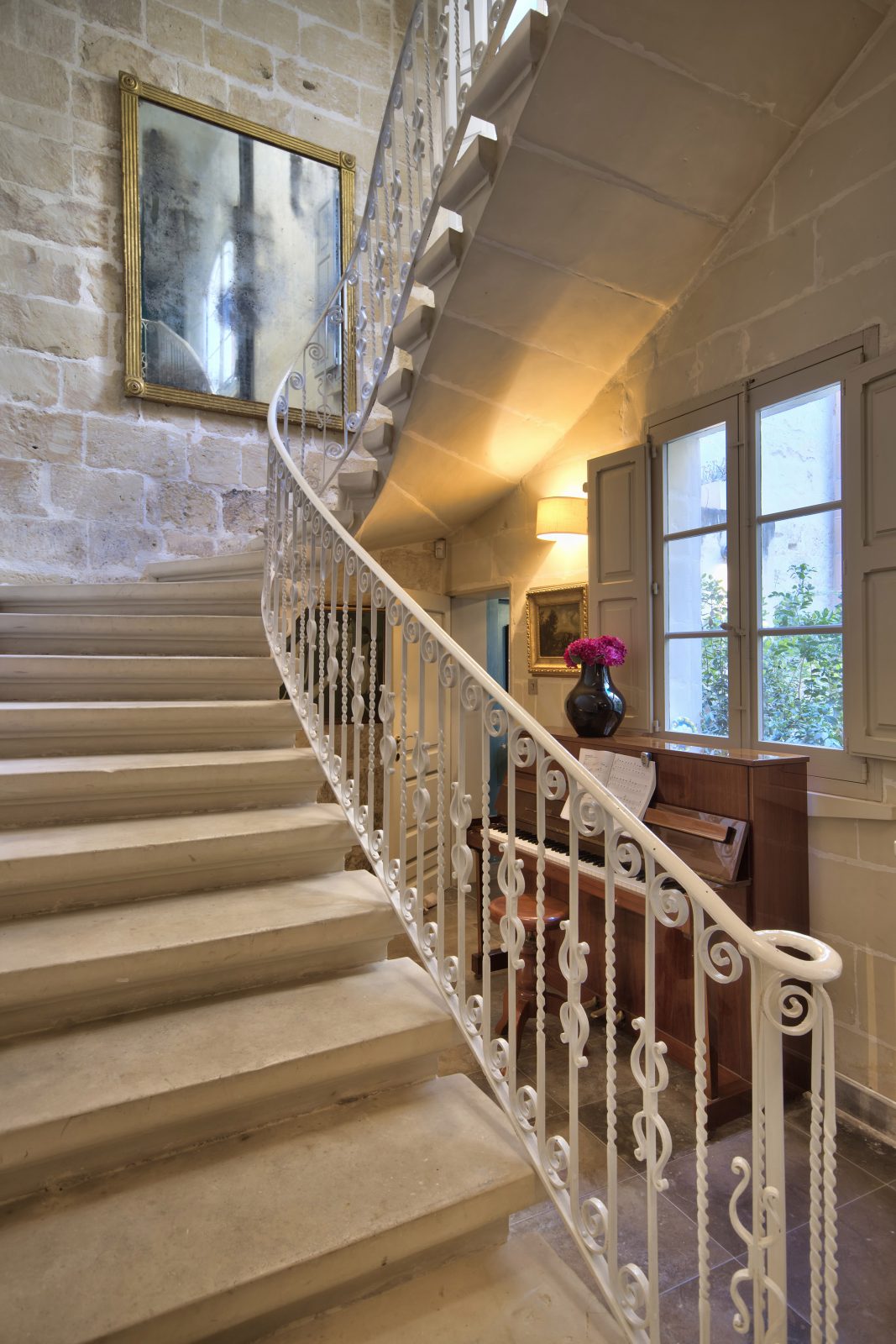 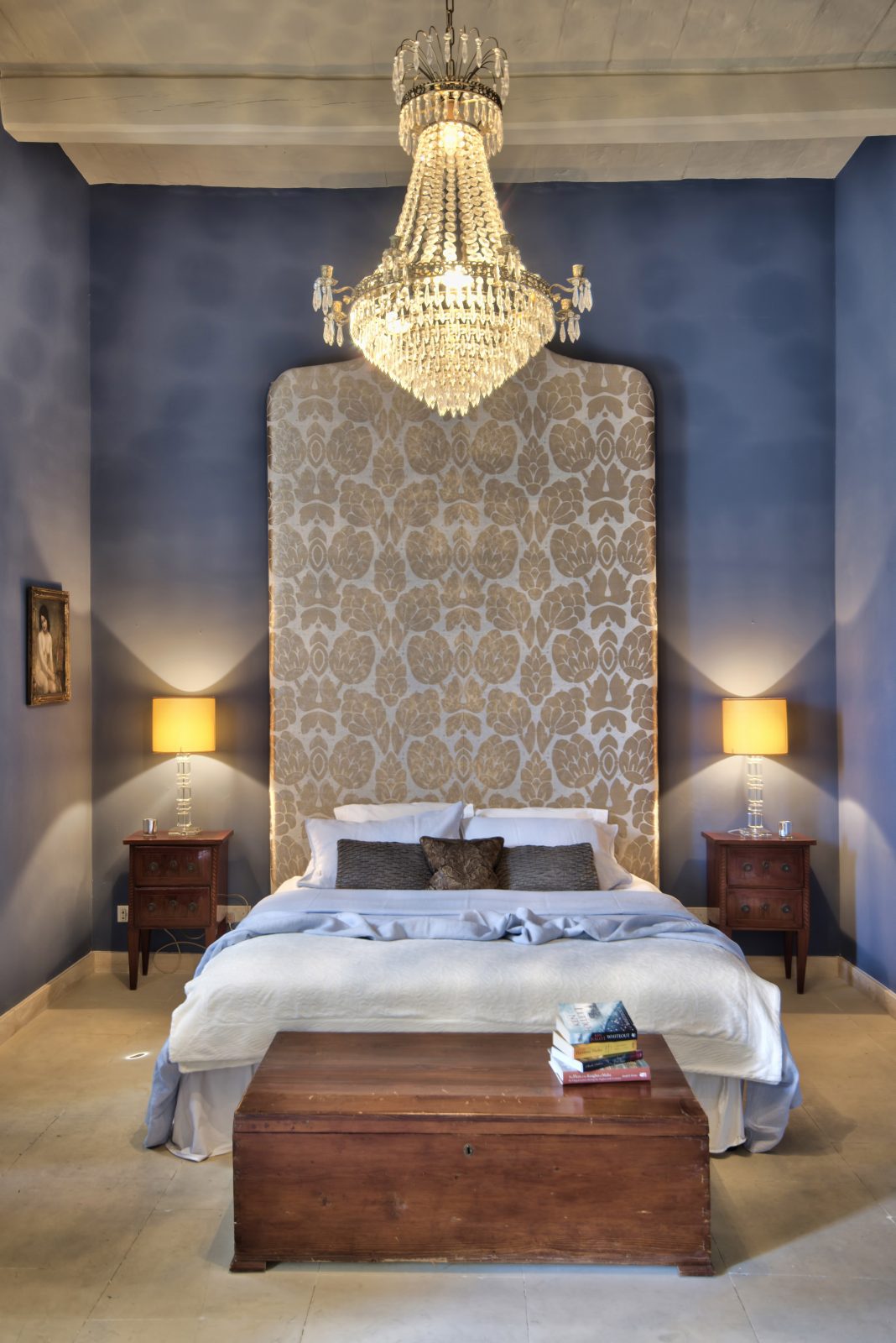 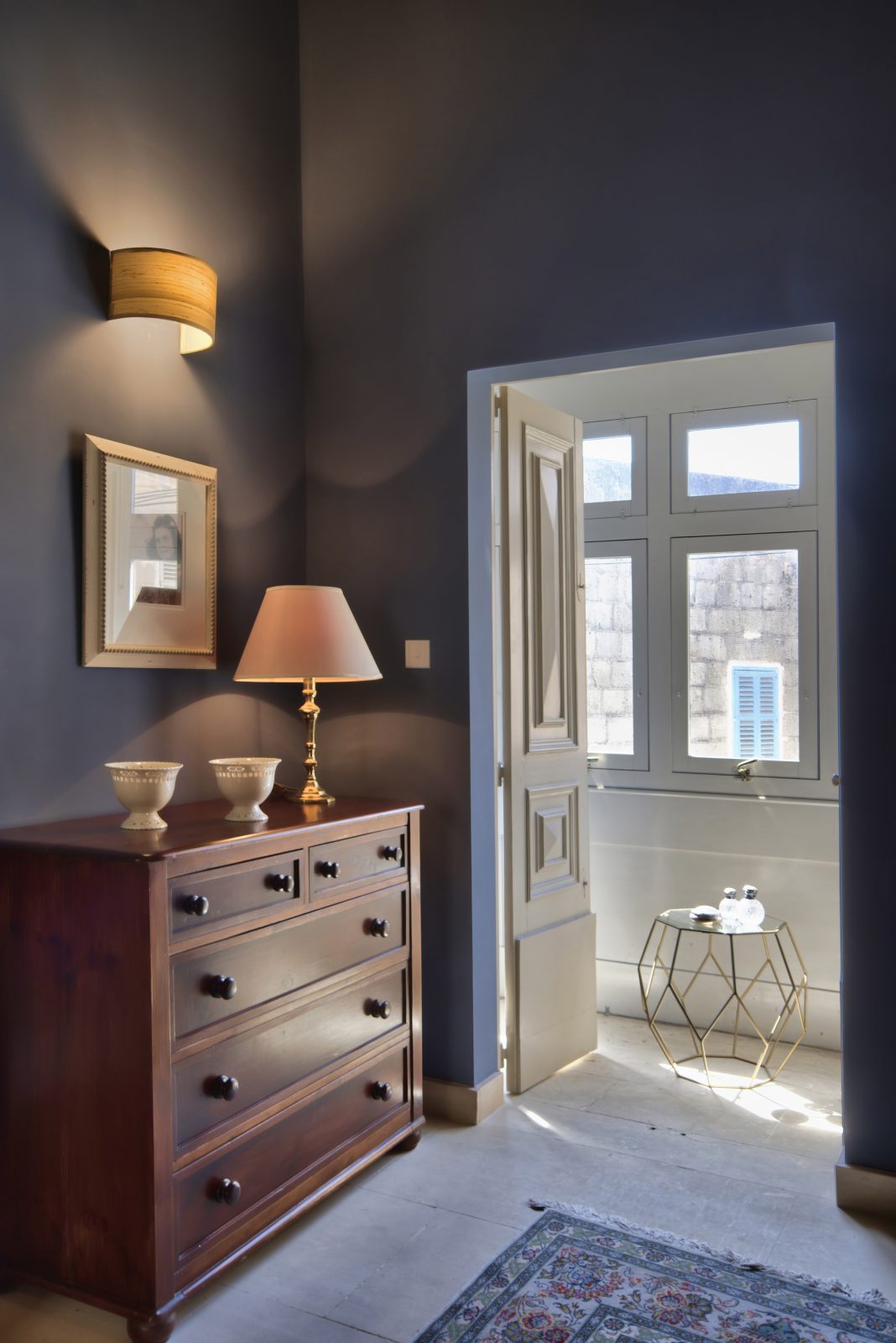 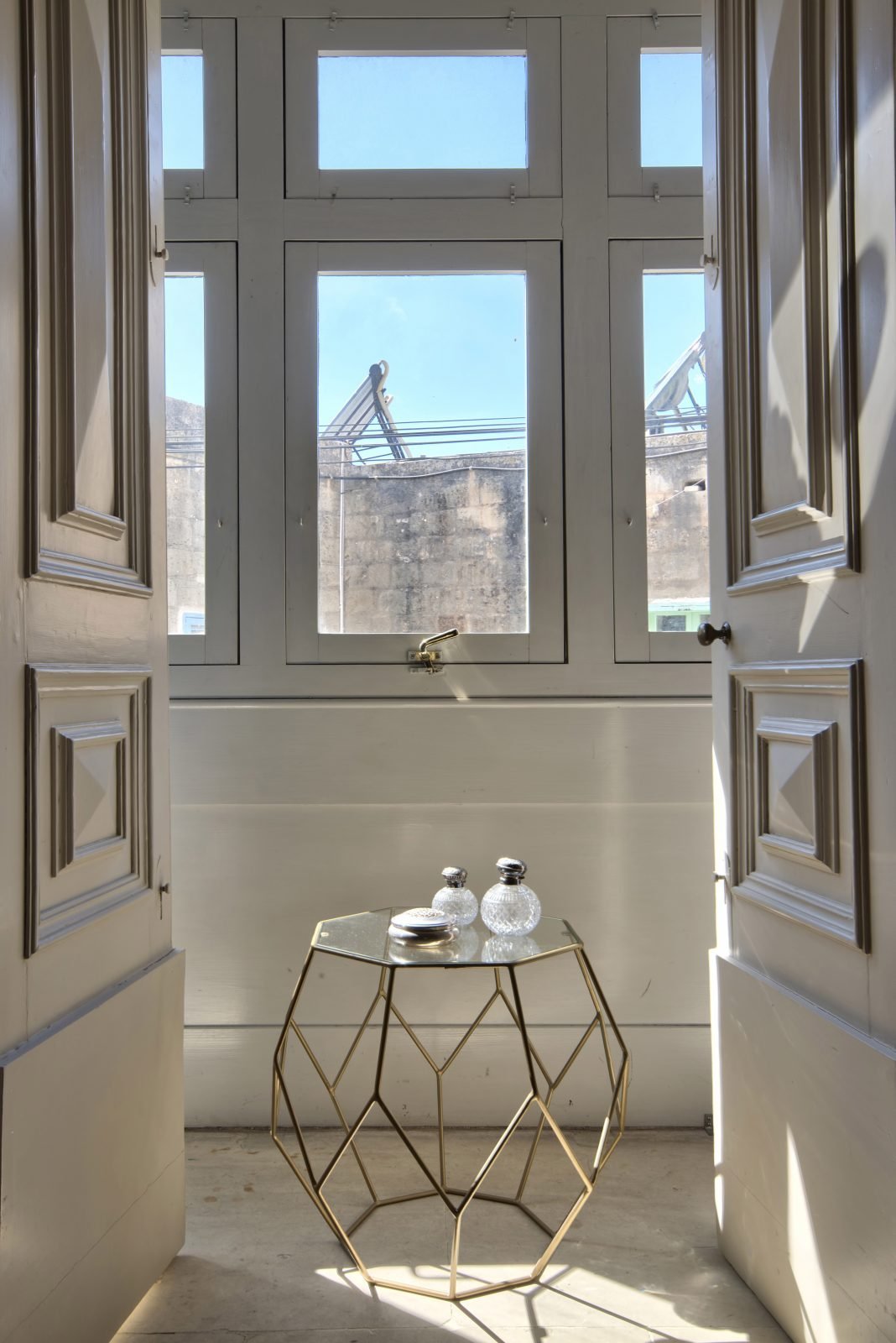 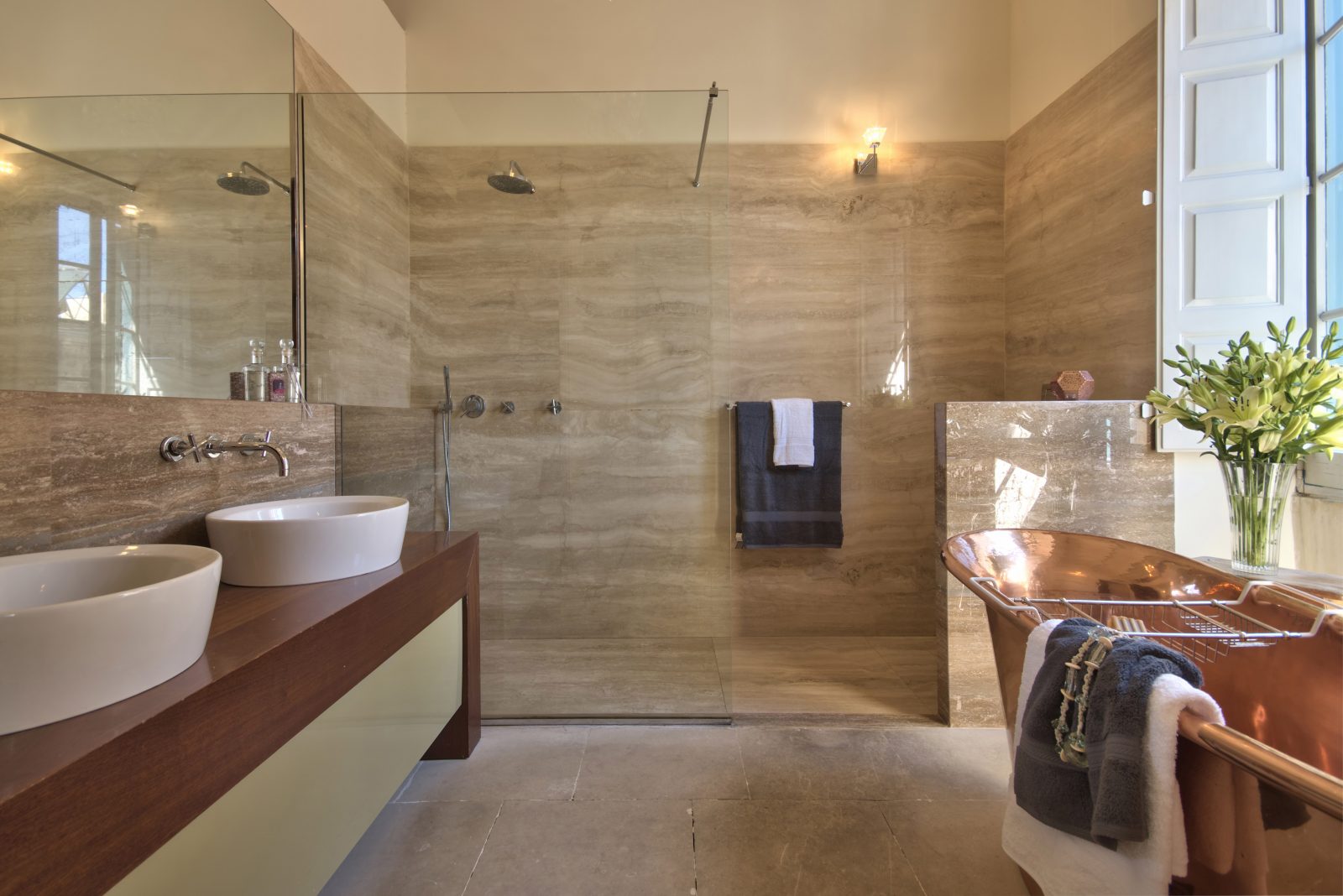 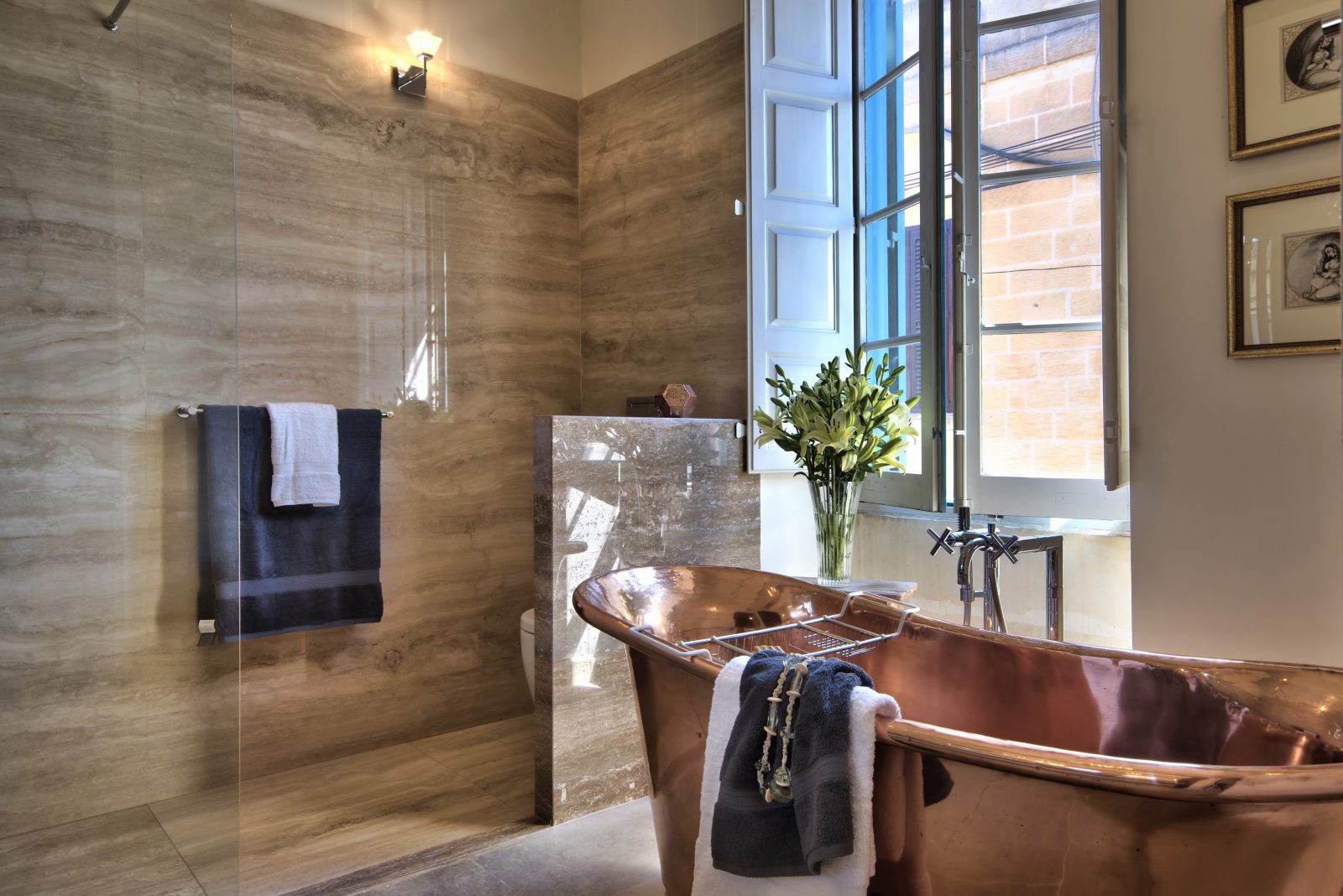