THE ART OF STORY-TELLING 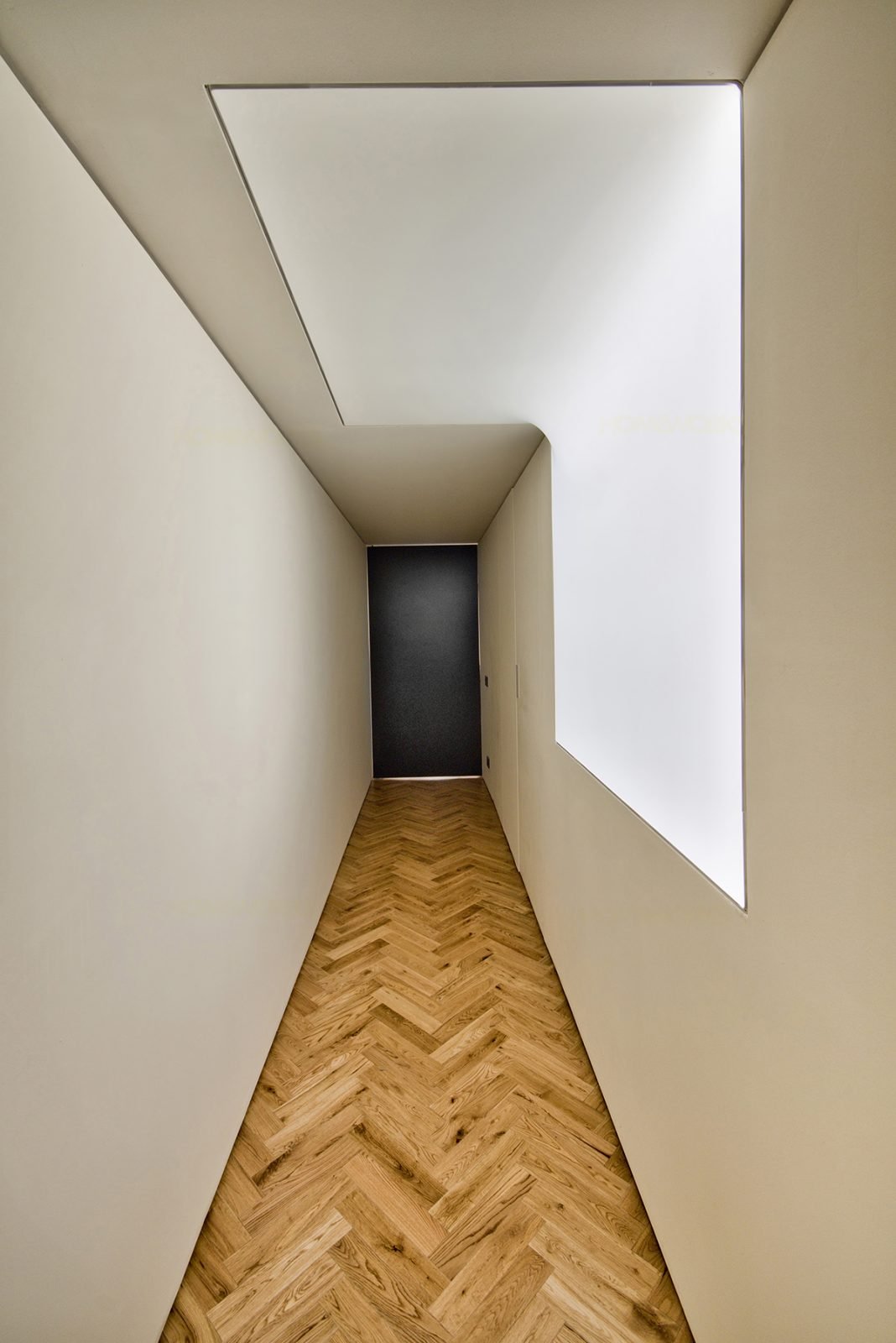 This apartment was the first residential new build for architect Simon Grech and the challenge was taking a nondescript space and giving it character. ‘With an old building you have interesting spaces to work with, different volumes and heights which make it easy to create an interesting and meaningful space,’ he says. ‘This apartment on the other hand, was a standard new build with no memories or stories, no soul. The challenge was to give it a soul, to create poetry.’
This he has done using texture, colour and thoughtful design ideas that transform what was once little more than a white box into something altogether more interesting and most importantly, comfortable as well as stylish for the homeowner, a young businessman, to live and relax in.
‘We had to do something different,’ says Simon. ‘For example with the corridor, we just didn’t want it be a space with doors on either side – we wanted to create an experience. Here you don’t see the doors and we also put in an art installation inspired by the artist James Turell; it creates a sense of transition, in a soft and spiritual way.’ The walls are painted a pale shade of grey. ‘If they were left white, there would be a high contrast between shadow and light,’ explains Simon. ‘With a grey hue, the light plays a different game. It diffuses more, it travels deeper into the apartment.’
Texture, key to warming up such a cold, blank space, has be introduced through the lines that run throughout the apartment and the oak flooring that’s laid in an interesting herringbone pattern. Above, in the ceiling above the living area, the original concrete ceiling has been exposed. ‘The contrast between the clean soffits and the exposed ceiling gives depth and the idea of a story to the home,’ says Simon.
Creating a sense of calm was also a key consideration. In the living area, large wall units hide the television and audio system so the room is not dominated by them. In the kitchen the usual paraphernalia is behind closed doors and the look has been integrated into the rest of the furniture which also helps create a sense of tranquility.
The front door has been hidden to accentuate this mood. ‘The idea is that the homeowner shuts the door and is immediately cocooned in their own world,’ says Simon. Other doors within the apartment can be left open or closed for cosier feel, and to reduce heat loss in chillier months.
The bedroom is particularly large, the homeowner having bought the bedroom of another apartment to make his more spacious. ‘We had to knock down a wall to integrate it,’ says Simon. ‘The other bedroom was on another level, though, so we have used it to create a difference between the washing space and the sleeping space.’
The end result is something Simon is happy with. ‘When you step inside the apartment now you do feel something, it does touch you,’ he says. ‘It now feels that it has a story.’

Here the original concrete ceiling has been exposed giving texture, as does the herring bone pattern of the oak parquet. The wall of floor-to ceiling units hide the TV and audio systems amongst other things. The walls have been painted a pale shade of grey, which softens the light and diffuses it through the apartment. Light fitting and Artemide floor lamp from Elektra

Pared back but made warm with textured fabrics, concealed lighting helps create a cosy mood. Artemida light tables from Elektra

Pared back but made warm with textured fabrics, concealed lighting helps create a cosy mood. Artemida light tables from Elektra

A micro-cement finish in the bathroom creates seamless surfaces - a key request by the homeowner who did not want to have to clean grouting. The bathroom is in what was the bedroom of another apartment. On a higher level, this helps zone it from the bedroom 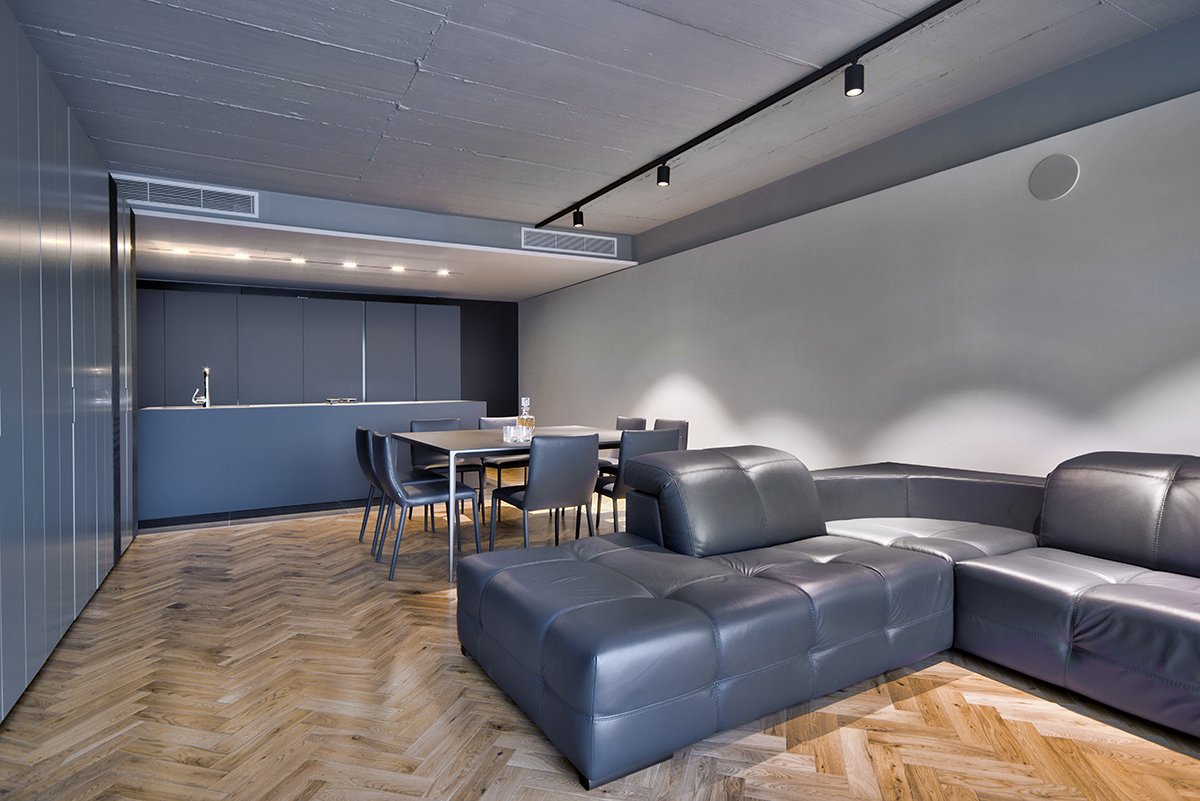 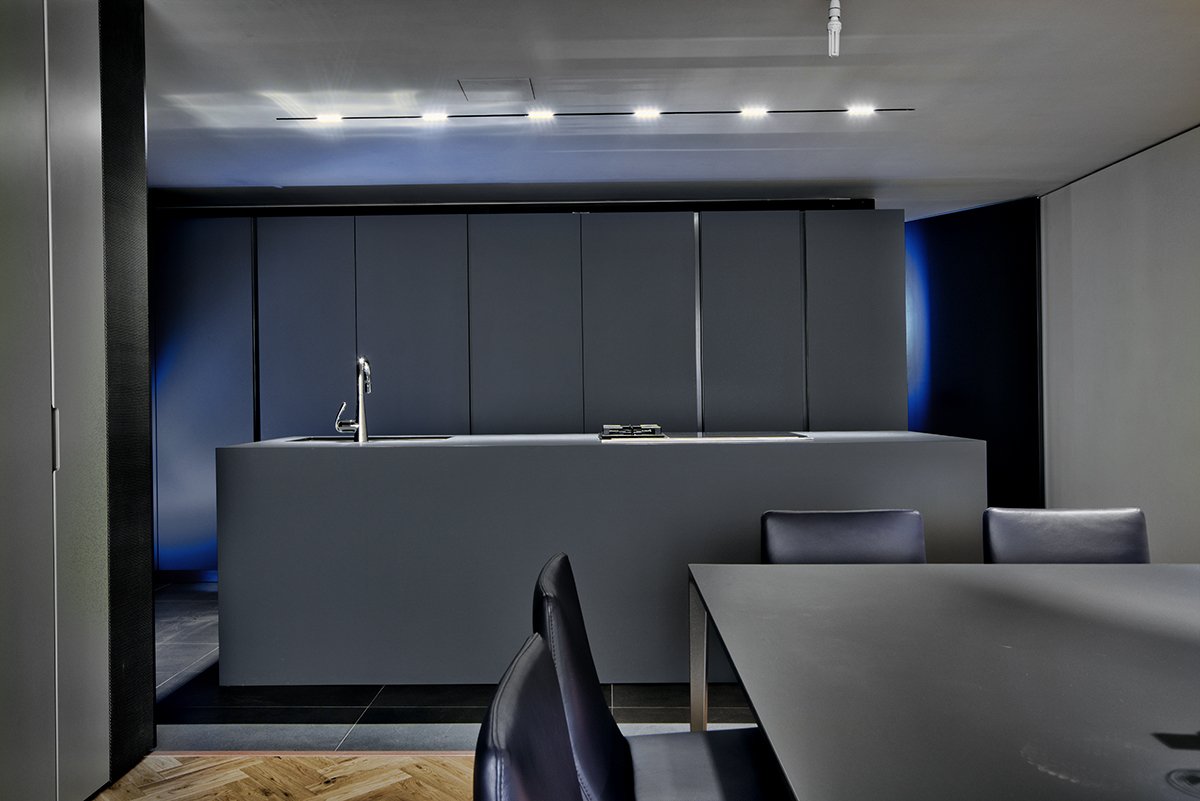 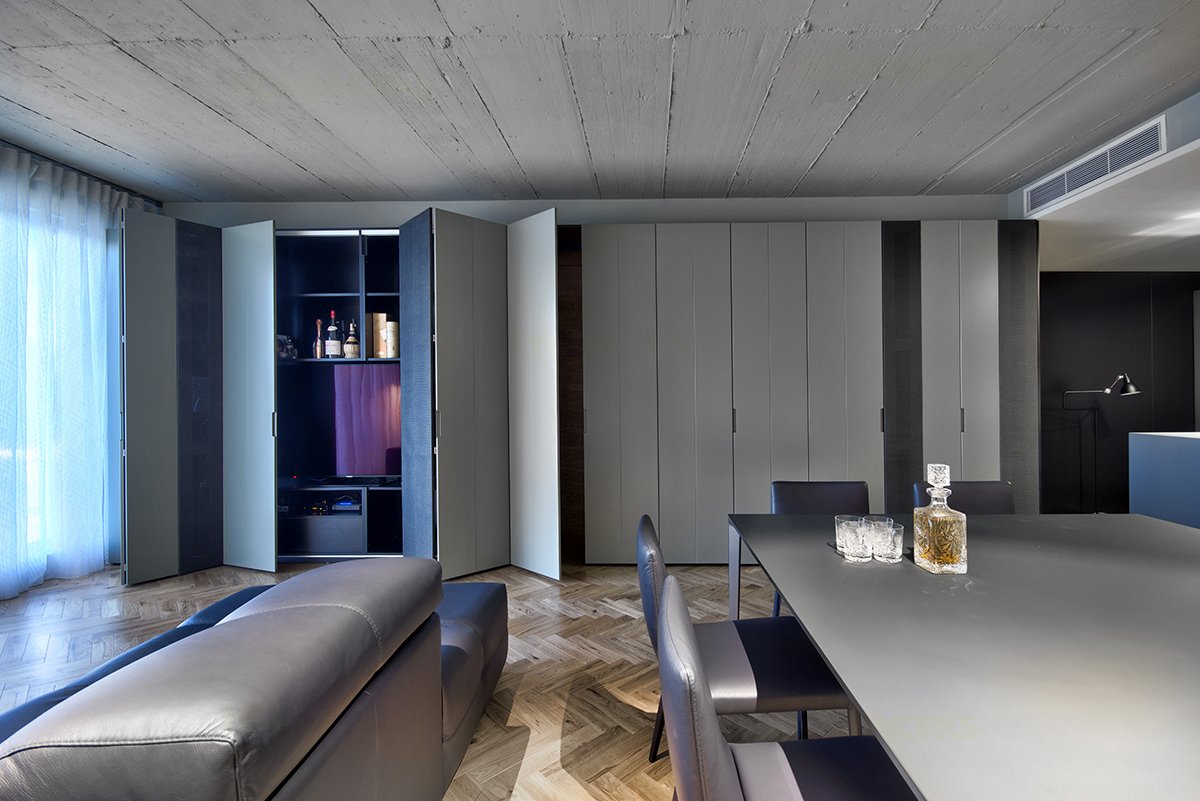 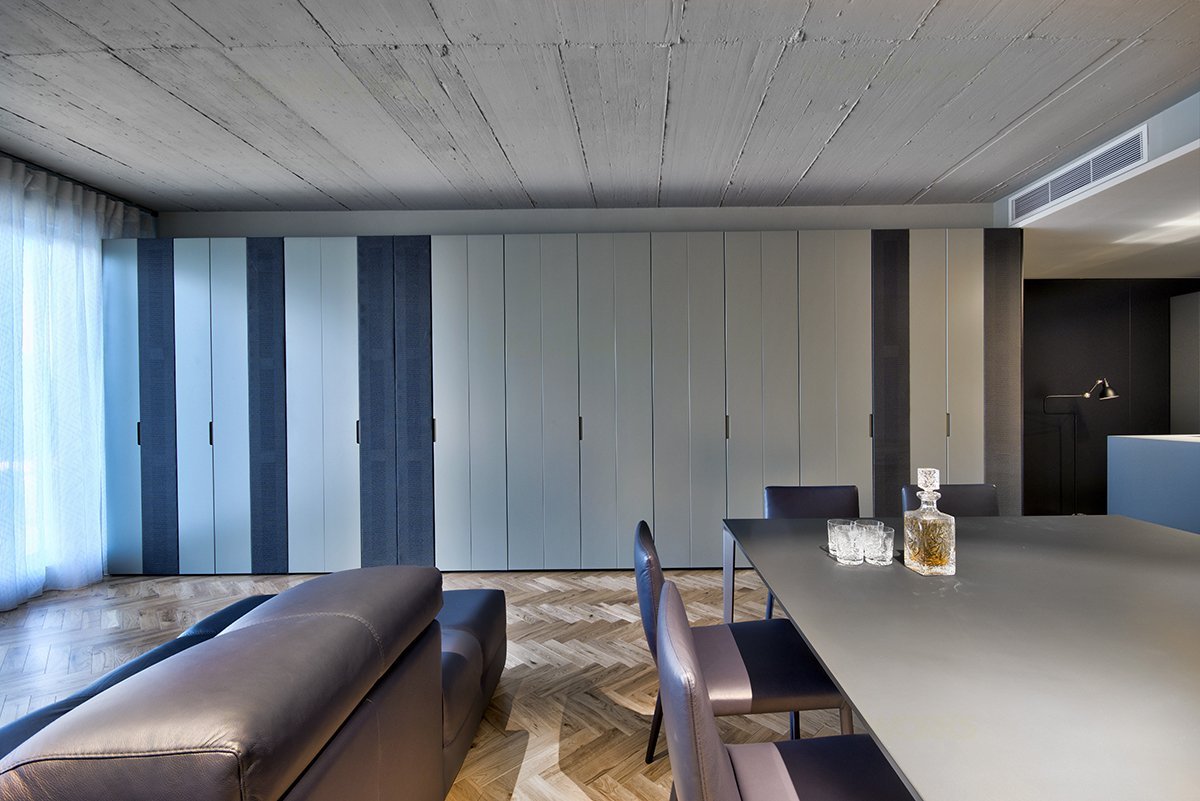 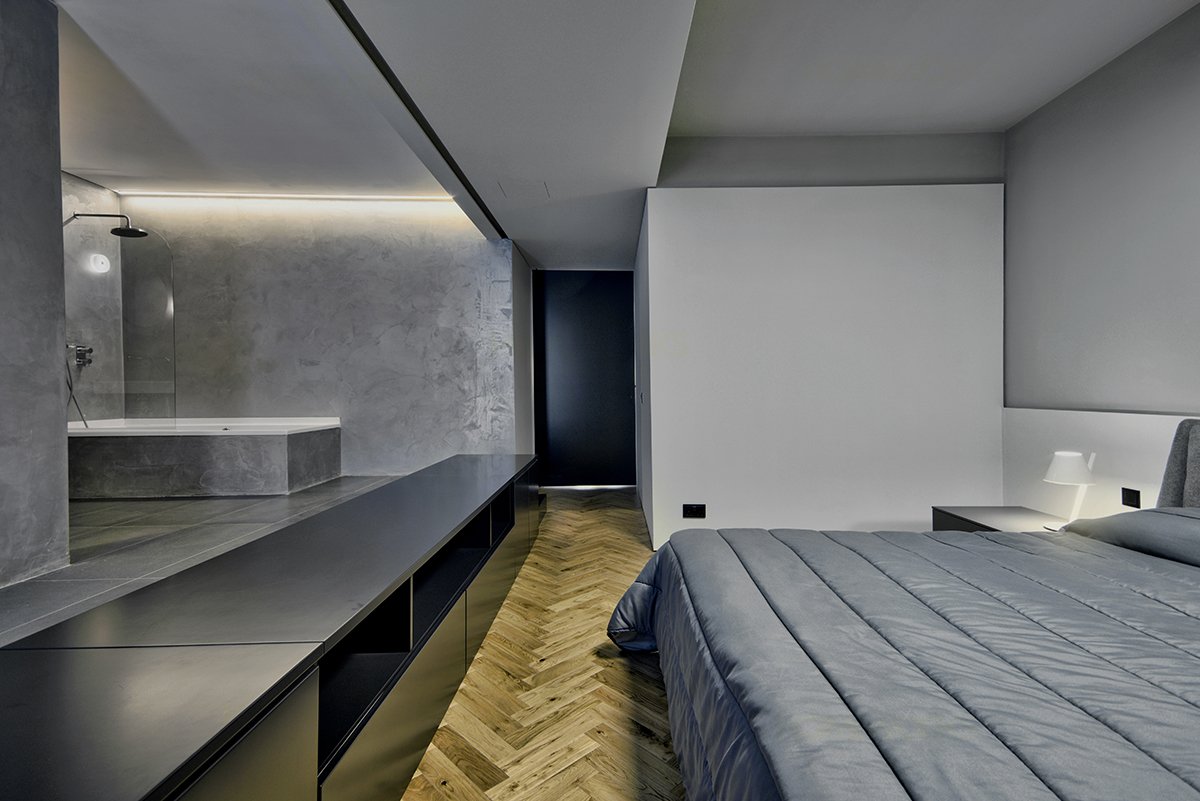 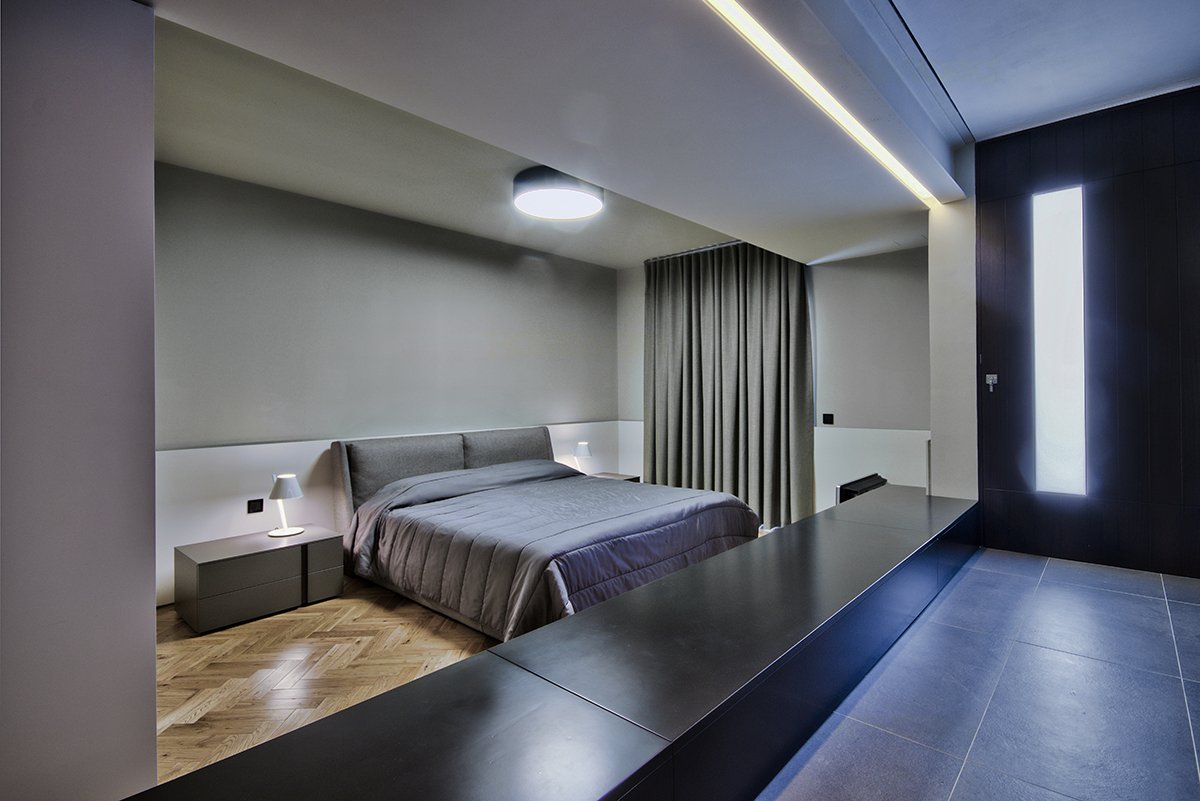 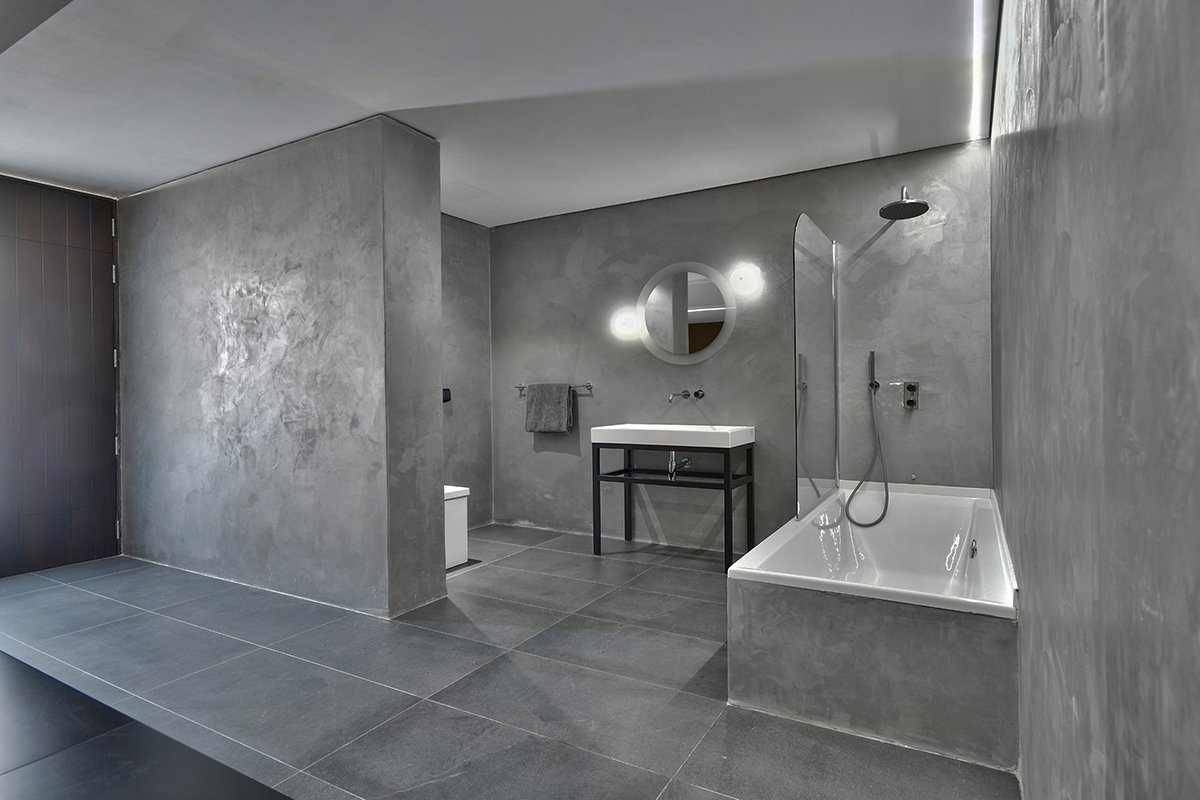